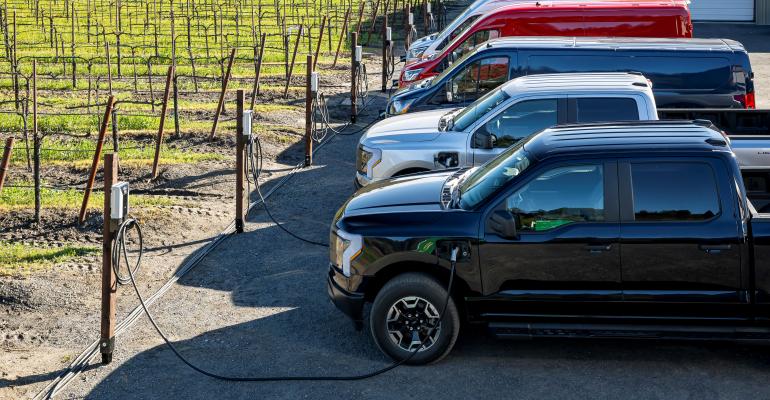 A short ride in Ford’s first electric pickup truck suggests it can be a real work truck.

It may be Ford’s most unexpected product success, at least based on reservations – and it’s not even in production yet. The ʼ22 Ford F-150 Lightning, for which deliveries are to start this spring, has now had its reservations capped after they reached more than 200,000 in the eight months after its May 2021 unveiling.

To date, no automotive journalists have driven an F-150 Lightning on open roads. Still, a tasting menu is better than no menu at all, so we jumped at the offer of a brief low-speed ride-along in an F-150 Lightning Pro, the work-truck model that will come off the lines first (pictured, below).

Our ride, at speeds up to 20 mph (32 km/h), took us along packed dirt and gravel roads between plots of grapevines in neat rows, up into the hillside vineyards of the Dutton Ranch in Sebastopol, CA. It was one part of a two-day media introduction to the Ford Pro suite of software and services that the company expects to account for billions of dollars of revenue by mid-decade.

The Pro version of the F-150 Lightning will include those Ford Pro services, continuously transmitting data on location, driving patterns, battery charge and quite a lot of other information to the cloud. Fleet managers can access the data and, as they add battery-electric vehicles to their fleets, use Ford Pro Intelligence to manage and schedule charging at the depot, at public charging sites and even at drivers’ homes if they take a work vehicle overnight.

Unlike the ʼ24 Chevrolet Silverado BEV that is to hit showrooms later next year, the electric Lightning pickup truck is instantly identifiable as a member of the F-150 family. Ford has consistently said many of its long-term truck buyers were open to electric powertrains, but they demanded the truck “look like an F-Series” and not be “weird.”

While only the cab and the inside of the pickup bed are shared with gasoline or diesel F-150s, that allows all existing upfit equipment to drop in without changes to any mounting points. The Lightning’s smoother sheet metal and lack of a grille register visually as just a different model of the existing truck. Mission accomplished on that front.

Inside, the Lightning Pro cabin is more similar to its gasoline equivalent than is the retail electric F-150 (pictured, below). Unlike the retail vehicle’s 15.5-in. (39-cm) portrait-style center touchscreen display, the Lightning Pro has the 12-in. (30-cm) landscape touchscreen found on higher-end F-150 gasoline trucks – with added icons reflecting the electric drive – and the durable hard plastics of any work truck.

Climbing up rutted vineyard trails, it’s immediately clear the ride of the electric F-150 is better than that of the gasoline model. The Lightning is the first-ever F-150 with independent rear suspension, and with the added weight of the battery pack – roughly 150 kWh, though Ford hasn’t given a precise capacity – the electric truck handles potholes, uneven ridges and other irregularities without the crashing ride of a live-axle pickup.

It’s also remarkably quiet. Ford didn’t have a comparable gasoline F-150 Pro onsite, but the electric pickup’s loudest noise up to about 20 mph was the pedestrian-alert sound. The few seconds we spent at higher speeds showed how quiet an electric work truck can be.

Navigating the tight curves between the plots was a good way for Ford to show off the F-150 Lightning’s tight turning radius of 24 ft. (7.3 m) (against the 20.4 to 26.5 ft. [6.2 to 8.1 m] of gasoline versions, depending on model). The electric truck has almost exactly 50-50 weight distribution, so the rear wheels didn’t lose traction even without any load in the bed.

In the tightest of turns, because we climbed to the top of the hill with the truck in Off-Road mode, the inside rear wheel skidded on the gravel. That’s the “digital locking axle” programmed into the traction-control software, according to Jasen Turnbull, the Lightning’s marketing manager. In Normal drive mode, the driver can choose to turn on the locker, but it’s otherwise off.

All too quickly, our 5-minute ride was over, but from this minimal experience, it seems safe to suggest the Ford F-150 Lightning should prove capable of the kinds of truck duties – up to 10,000 lbs. (4,536 kg) of towing, as we heard several times – that truck buyers expect. We look forward to a more comprehensive test drive. 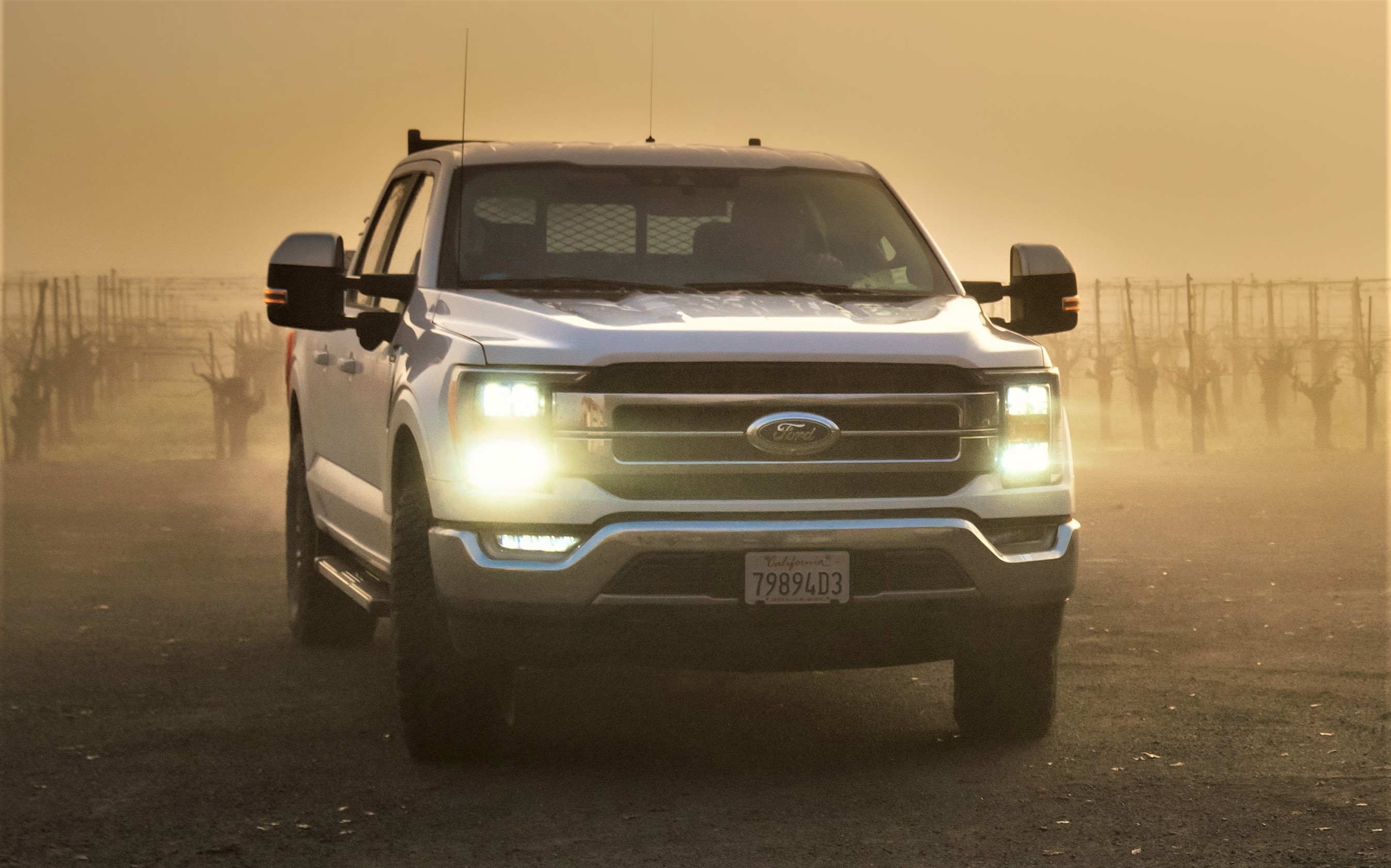