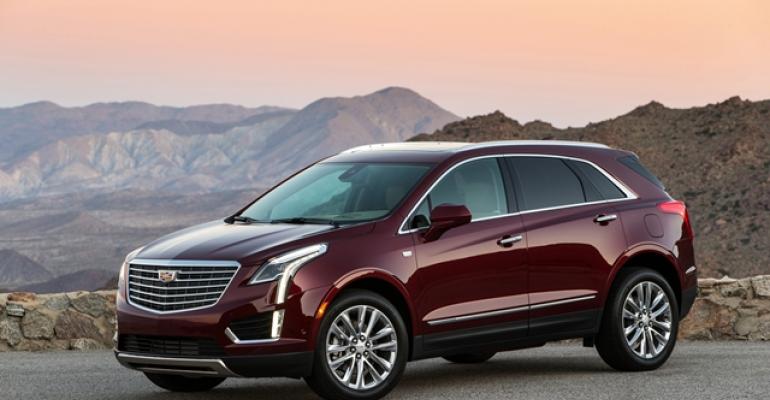 XT5 Much More Than Utilitarian Hauler

On sale in April, the 5-passenger CUV benefits from softer edges in the sheet metal, an excellent 3.6L V-6, sophisticated all-wheel drive and aggressive mass reduction. Inside, the XT5 is ergonomically sound and isn&rsquo;t trying too hard to be flashy.

DANA POINT, CA – There are lots of ways to reinvigorate Cadillac, but it appears utility vehicles will remain a key pillar in the strategy for the foreseeable future.

Audi, BMW, Mercedes and Lexus are killing General Motors’ longtime luxury brand on the car side of the showroom, but there’s a glimmer of hope when SUVs and CUVs are considered. Through February, Cadillac has sold 12,437 Escalades and SRXs, placing the brand above Audi, Infiniti, Land Rover and Volvo. Yes, Cadillac continues to lag behind utes from Acura, BMW, Lexus and Mercedes, but the brand nonetheless is competitive.

Into this dynamic market arrives an all-new ’17 Cadillac XT5, replacing the SRX. Going on sale in April, this 5-passenger CUV, like the CT6 sedan also launching now, benefits from softer edges in the sheet metal, an excellent 3.6L V-6, sophisticated all-wheel drive and aggressive mass reduction.

On the inside, the XT5 is ergonomically sound and extremely comfortable, and its interior design language is aesthetically pleasing without trying too hard to be flashy.

One might suggest the interior designers were discouraged from taking chances, which is ironic considering the monumental risk in ditching the name of the most popular vehicle in the Cadillac stable.

In 2015, the SRX, late in its lifecycle, made up 40% of Cadillac’s U.S. deliveries – cars and light trucks combined. It outsold every one of its rivals, except the segment-leading Lexus RX.

So the SRX has earned a measure of respect in the marketplace, and its successor, even with a new name, is bound to maintain this momentum. The new model has what every utility buyer wants: more interior space, thanks to a wheelbase stretched 2 ins. (5 cm) as part of the all-new C1 platform.

The scalable architecture will spawn a new GMC Acadia 3-row CUV, and both will be produced at the former Saturn plant in Spring Hill, TN. Many of the polymer injection molding machines once used to make Saturn body panels there now are churning out plastic interior and exterior trim for the XT5. That’s cost-efficient engineering.

This summer, the XT5 also will roll out of a plant in Pudong, Shanghai, which also will produce the CT6 for the Chinese market.

The 4-cyl. won’t be available in the U.S. (for now), so our test drives here focus on the V-6, which runs well on regular unleaded. Premium is recommended for the 2.0L turbo-4 in China.

The 3.6L (codename LGX) is a fine and worthy successor to the High Feature V-6 that has powered much of the General Motors portfolio since 2008. Tested also in the Cadillac ATS and Chevrolet Camaro, this all-new, all-aluminum LGX V-6 earned a Wards 10 Best Engines trophy in January.

Like the High Feature engine, the new LGX employs direct fuel injection, but the similarities pretty much end there. The only parts carrying over are the hydraulic lash adjusters in the valvetrain.

The new V-6 has a longer stroke and slightly wider bore size and is 22 lbs. (10 kg) heavier than its predecessor. The engine now has four full phasers, enabling continuously variable cam phasing to help the engine breathe better in all operating modes.

The LGX is GM’s first overhead-cam engine with cylinder deactivation (switching to 4-cyl. mode during light loads), and stop/start is standard as well and always on. This engine is ideally mated with a vehicle that is 292 lbs. (132 kg) lighter than the outgoing SRX, thanks to creative structural applications of high-strength steels.

Mass reduction was a top priority for engineers, and the result is a vehicle that is 650 lbs. (295 kg) lighter than a similar-sized Mercedes GLE 350.

The V-6 moves the XT5 quite capably, but it’s best to shift into Sport mode when passing or attacking winding roads like those here.

The utilitarian hauler suddenly becomes so much more – a sport sedan with a high seating position. Along the way, efforts to improve fuel economy also pay off, as we close out a drive of a few hundred miles with an impressive 24.5 mpg (9.6 L/100 km), according to the trip computer.

Don't Let Android Auto Get You Down

Optional, but worthwhile, is the new “twin-clutch” all-wheel-drive system, which can transfer up to 100% of available torque to either the front or rear wheels. Across the rear axle, the electronically controlled rear differential can direct all available torque to either wheel laterally. The AWD system is driver-controlled and includes a new “disconnect” feature that disables the rear drive unit for improved fuel efficiency when 4-wheel motivation is not needed.

The electronically controlled 8-speed automatic transmission represents Cadillac’s first application of Electronic Precision Shift, a feature that frees up a storage bin large enough for purses below the center console.

Inside, the XT5 is warm and inviting, exhibiting excellent craftsmanship and fit-and-finish. A rich brown shade known as Maple Sugar, paired with a beautiful satin-finish Rosewood trim, is a welcome addition to black, gray and beige leather offerings.

The Cadillac User Experience human-machine interface continues to improve, and cycling through options from screen to screen generally is simple, as is connecting a Bluetooth phone.

Android Auto and Apple CarPlay also are available. During our test drive, our Android phone was able to connect with Android Auto using an app loaded on the phone. But music on the phone could not be accessed. After much frustration, we didn’t even try to make any phone calls with the system.

There will be growing pains as the world of consumer electronics collides with the automobile, but a hinky smartphone link can’t spoil an overall great experience in the XT5.

Consider the attractive starting price of $39,990 (with front-wheel drive and destination charges), and the draw for mainstream consumers to step up to Cadillac may be hard to resist. A loaded Platinum AWD model can be had for $65,835 – still a bargain.