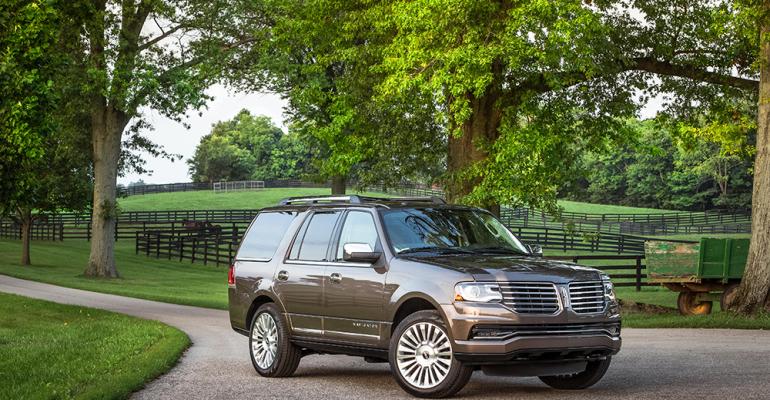 LOUISVILLE, KY – The Lincoln Navigator was ahead of its time, pioneering the segment for yacht-like luxury SUVs when it docked 17 years ago. It did plenty to bolster parent Ford’s bottom line and continues to do so with robust profit margins.

Yet, oddly enough, after all that time, the Navigator technically remains a first-generation vehicle on the same architecture, even though improvements have been incorporated, particularly in 2007, when the solid rear axle was swapped out for an independent suspension and third-row seats folded flat for the first time.

Today, Lincoln is launching a refreshed Navigator, and the enhancements are noticeable and worthwhile. But the footprint, hard points and general flavor carry over from 17 years ago.

A full redesign won’t come until after the all-new aluminum fullsize F-150 pickup, which serves as the basis for the Navigator and its Ford Expedition platform mate, comes to market in the coming months and proves out its lightweight technologies.

This current refresh probably should have happened a few years ago because the outgoing model was sorely dated. But a completely re-engineered Cadillac Escalade with an all-new small-block V-8 forced Lincoln to hustle up a strategy to stall the coronation of the King of Bling.

So here it is, a refreshed Navigator with a stout new powertrain, advanced adaptive suspension to offset a degree of body roll, new seats from Lear, exterior cosmetic updates, a user-friendly interface and a leather-wrapped instrument panel with distinctive cross-stitching to replace the frumpy cast-skin vinyl.

The upgrades are appreciated, although there wasn’t much budget to change the overall aesthetic inside or out or to address interior fit-and-finish shortcomings, such as the substandard trimming of the headliner.

While adaptive cruise control and lane-keeping assist are becoming common in luxury cars, those features inexplicably are absent in this SUV that starts at $62,475. If Lincoln wants to be taken seriously, these items should be standard.

Under the hood, the twin-turbo 3.5L V-6 isn’t new, but its increased 380-hp and 460 lb.-ft. (624 Nm) peak output represents the new high-water mark for the 6-cyl. EcoBoost, which pulls duty in much of the Ford/Lincoln portfolio.

Ford hasn’t divulged all the specs for the upcoming F-150 soon to launch, but don’t be surprised if the 3.5L EcoBoost numbers fall in line with Navigator’s.

The 6-speed automatic transmission carries over but has been recalibrated to mate up with the V-6, which had not been available previously in the Navigator. With newly added SelectShift, Navigator drivers can shift gears manually but never will.

The old powerplant was the trusty (but ancient) 5.4L naturally aspirated V-8, which steadily has been phased out and replaced by the superior 5.0L V-8.

Navigator customers may feel a sense of entitlement to V-8 power, but they will get it from the EcoBoost V-6 and be more than satisfied.

On undulating Kentucky roads here, the engine does everything well: It’s quiet at idle, smooth and steady cruising the interstate and more than eager to dial up triple-digit speeds fully loaded. Even heading up hill, the EcoBoost V-6 manages to propel this 3-ton behemoth without much fuss.

During testing on mostly rural roads here, the Navigator achieves an unremarkable 16.5 mpg (14.2 L/100 km), including a stretch in stop-and-go traffic.

Mileage improved to nearly 20 mpg (11.7 L/100 km) for the 6-hour drive back to Detroit when flights were canceled. For that drive, the vehicle was loaded with five adults and their luggage.

In the third row, the lack of a solid rear axle, allowing for a lower floorpan, is greatly appreciated on a long road trip. The space is surprisingly comfortable for a moderately sized adult.

A vehicle this size cannot be described as dynamically agile, but the new continuously controlled damping goes a long way to stabilize and even customize ride quality. The system uses sensors to monitor road conditions 46 times every 2 milliseconds, then adjusts the dampers accordingly.

Three settings can accommodate varying preferences. Sport lets the driver feel more of the road and corner more aggressively, while Comfort will deliver the floaty sensation that seems enmeshed with the big SUV experience. Normal is in between the two.

About 85% of Navigator customers are expected to choose the self-adjusting suspension system. Some 70% of vehicles will have base Select trim, while the remainder will be top-level Reserve models.

On the inside, the development team deserves credit for injecting a contemporary feel without a full redesign. The staff had limitations but accomplished much by applying three new types of wood (Swirl Walnut, Prussian Burl and premium Ziricote, for top-trim models).

Customer complaints about MyFord Touch and MyLincoln Touch forced the automaker back to the development labs, and the result, at least for the Navigator, is a simpler system that responds well to voice commands and offers more redundant controls in the form of chunky, chrome-plated knobs and switches. The dreaded slider for volume control is gone.

On the outside, a new grille replaces the outgoing grid with horizontally arrayed slats. It’s handsome enough but comes across as a mechanical interpretation of the flowing wing-like grille on Lincoln’s newer products, the MKZ and MKC.

Headlamps remain high-intensity discharge with the addition of accent LEDs. The front and rear now shine with 222 LEDs – 176 of those in the rear alone.

Like the previous SUV, the new one has an aluminum liftgate, SMC plastic hood and carryover sheet metal. Body-side cladding has been cleaned up.

Lincoln would have been wise to christen this refreshed Navigator two years ago when the luxury market was in full recovery mode.

A newer Navigator, for instance, might not sit fifth this year among the seven vehicles in Ward’s Large Luxury SUV segment. No.1 by a wide margin is the Escalade, even while transitioning to the new model. Through August, the Navigator has tallied 4,875 deliveries, trailing the Escalade,  Escalade ESV, Range Rover and Infiniti QX80.

This part of the country is home for the Navigator and Expedition, which are assembled at Kentucky Truck, along with Ford SuperDuty pickups, on two shifts at the pace of 86 units an hour.

Lincoln has sold 400,000 Navigators over the past 17 years. The refreshed model ensures incremental growth at the very least when it arrives in October. Sales in China begin in 2016.