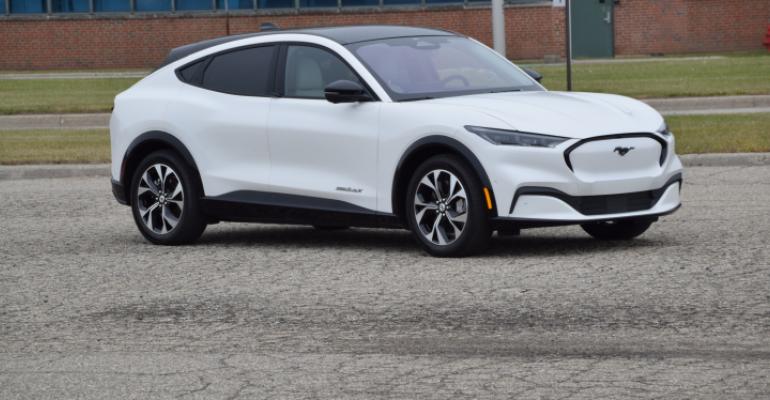 From Whisper to Unbridled in 2021 Ford Mustang Mach-E

On the highway, on two-lane roads, on city streets and in the neighborhood, the Mach-E is more than capable and more than competitive with the latest BEVs. Pricing starts at $42,000.

YPSILANTI, MI – The engineering and design work is done, the certifications obtained, the assembly line in Cuautitlan, Mexico, is churning out vehicles and customers are beginning to take delivery of the all-electric 2021 Ford Mustang Mach-E.

With the heavy lifting done, now’s a good time to ponder the internal arguments and the enormous pressure that surely weighed on the product-development team during a program that spanned more than three years.

Guardians of Dearborn’s most important and storied nameplate were probably saying, “Huh, you want this Mustang to have four doors and no gasoline engine and it’s gonna be several inches taller than a Fusion and have a roomy backseat? Why call it a Mustang?”

Tie in the political drama of planning to build this fastback CUV (that wants to be a coupe) in Mexico when the White House was lashing out at corporations for thinking globally rather than patriotically and, well, it’s no stretch to think the team had serious doubts along the way.

Forget all that backroom stuff because none of it matters once you get behind the wheel of Ford’s first long-range battery-electric vehicle and stoke the electrons, unleashing the Mach-E’s Mustang DNA. The Mach-E quickly dials up triple-digit speeds, a modern Hot Rod Lincoln passin’ cars like they was standin’ still.

Not that the Mach-E must be driven fast. Anyone shopping a BEV probably has conservational leanings, and that buyer will find the Mach-E a pleasant daily driver that has multiple personalities for any occasion.

One might assume Unbridled (or Hot Rod Lincoln) mode would result in depleted battery range. True, it sharpens acceleration, reduces electric assist in the steering and can deliver a muscular, sonic “exhaust tone” that virtually emulates that of a 5.0L gasoline V-8.

But Ford engineers say energy consumption is the same across all three ranges and that the Mach-E is calibrated (with throttle and brake controls working together) to maximize brake regeneration whether driving in one-pedal mode or not. 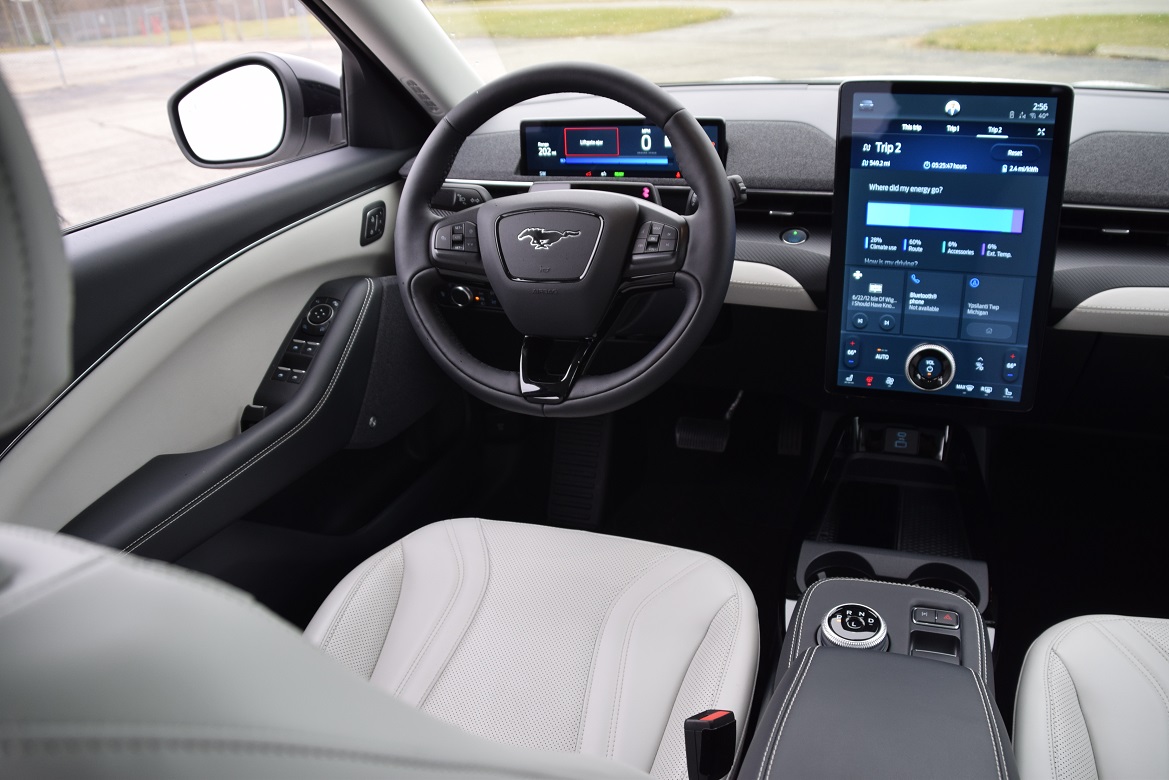 During test drives here at the American Center for Mobility, where Ford helped win World War II by building 4-engine bombers at its historic Willow Run plant, the Mach-E represents another “win” for the Dearborn automaker as the drive experience – steering, accelerating and braking – in pre-production models is natural, linear and familiar. It cannot be described as a wonky science project.

An autocross track was set up to demonstrate handling, which is not the Mach-E’s strong suit.

The car goes fast but a test drive merely confirms what’s on the spec sheet: Tipping the scales at 4,838 lbs. (2,195 kg) with up to 376 lithium-ion battery cells, it’s a half-ton heavier than a V-8 Mustang. Combine that with a much higher center of gravity, and the Mach-E isn’t exactly nimble and tends to understeer, even with fully independent front and rear suspension and despite the best efforts of Mustang chassis engineers.

The same can be said for many BEVs, so don’t let the issue of road manners overshadow the Mach-E. On the highway, on two-lane roads, on city streets and in the neighborhood, the Mach-E is more than capable and wholly competitive with the latest BEVs.

The drivetrain comes in rear-wheel and electronic all-wheel drive (a single motor mounted in back for RWD, while a second motor is added to the front axle for AWD) as well as standard- and extended-range battery packs. 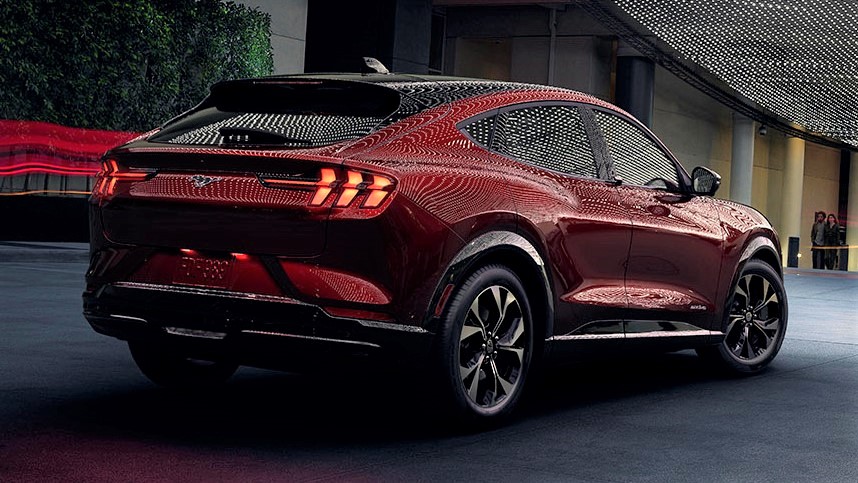 Ford is expecting most Mach-E customers to opt for AWD and the extended-range battery.

Acceleration times are good but not Tesla-level Ludicrous. The fastest Mach-E (extended-range First Edition with AWD) can sprint to 60 mph (97 km/h) in 4.8 seconds, while the Premium RWD extended-range model is the slowest, at 6.1 seconds, Ford says.

If you find these numbers less than impressive, the Mustang Mach-E GT and GT Performance Edition will be available late next summer with 480 hp, 235 miles (378 km) of range and a claimed 0-60 time of 3.5 seconds. 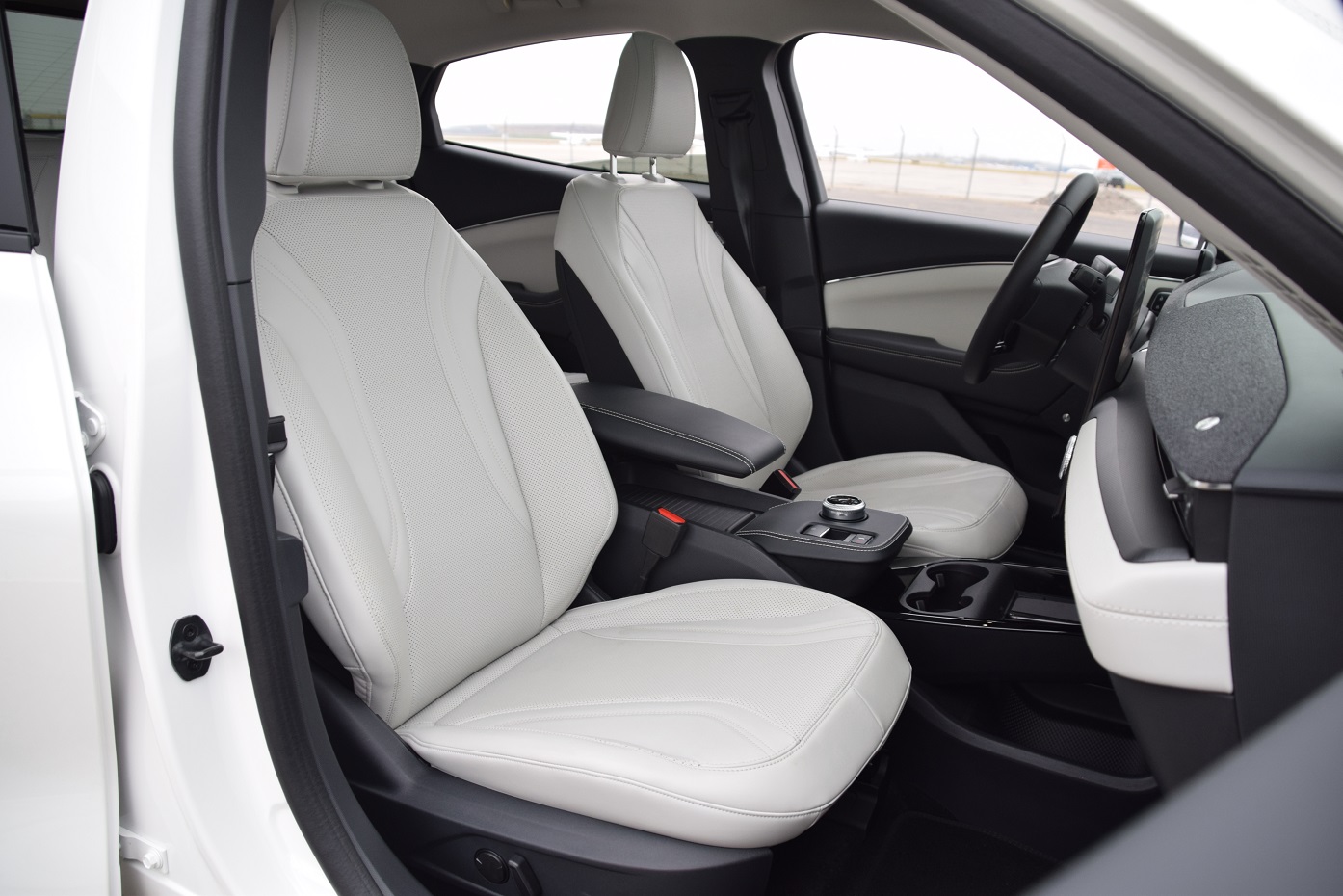 The Mach-E drivetrain is impressive, but in some ways the car’s crowning achievement is its widespread application of groundbreaking technologies and its futuristic feel. For instance, there are no door handles inside or out – just release levers inside and capacitive touch sensors outside.

From the driver’s seat, the human-machine interface is completely new, springing from Ford’s latest Sync 4A infotainment platform.

Familiar switchgear from the Ford parts bin adorns the steering wheel and doors, but otherwise there’s barely a mechanical button or switch to be found, except for the rotary shifter dial in the center console and the (greatly appreciated) volume knob.

Virtually everything else, including climate controls, vehicle settings and driver preferences, is controlled by the vertical touchscreen that, at first glance, appears awkwardly obtrusive. But the menu is user-friendly and just takes some time to become familiar. Voice controls work very well, as does Bluetooth phone pairing.

Darren Palmer, Ford’s product development director for EVs, tells Wards the team initially considered a 12-in. (30-cm) center screen that was more square, but the larger vertical configuration (pictured below) earned its place with greater functionality and ease of use.

Palmer says the vertical display presented enormous challenges, in part because so many functions are incorporated, from phone connectivity, navigation and energy usage to driver-assistance technologies, mobile apps and over-the-air updates. 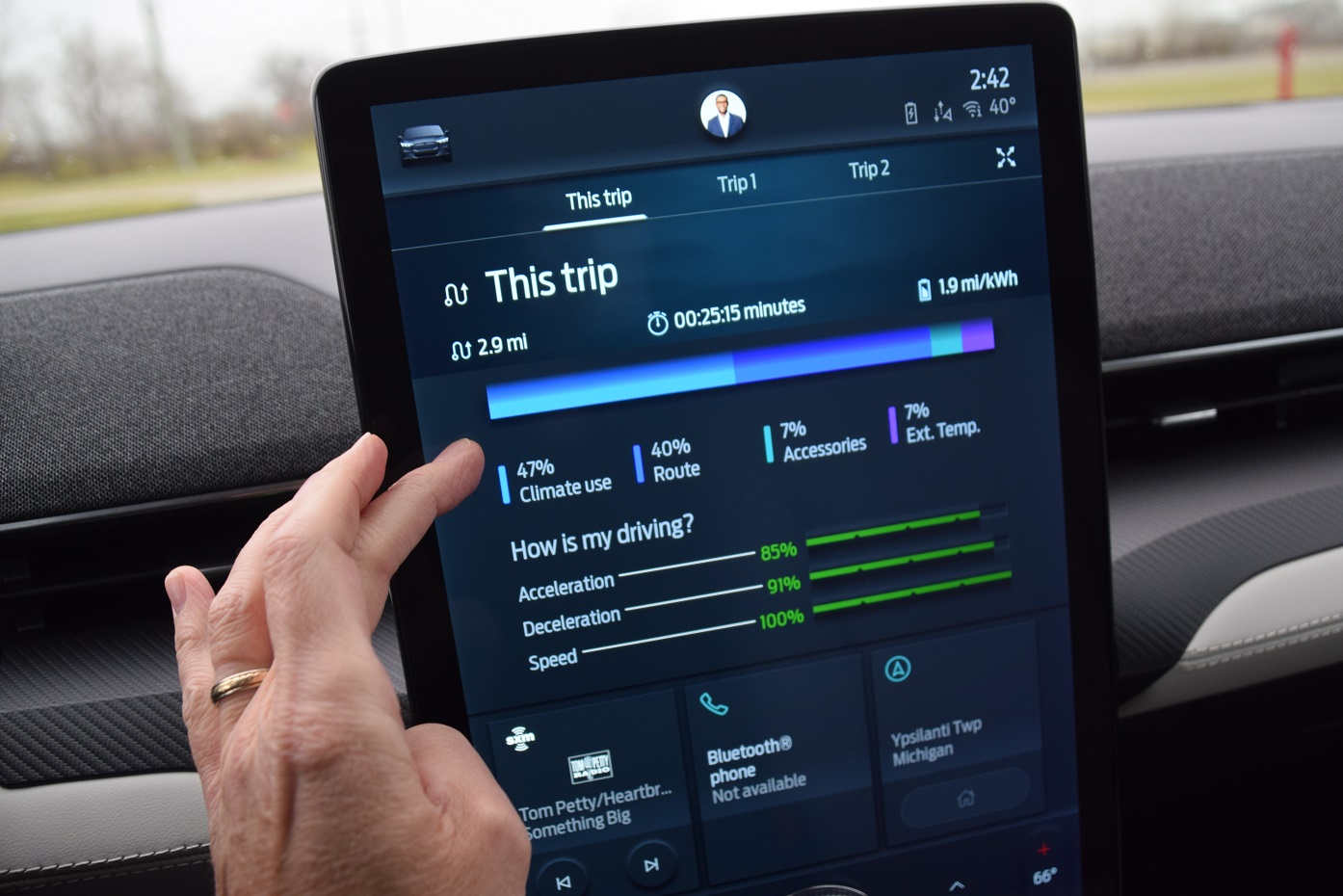 Compared with the rest of the Mach-E vehicle program, including development of the powertrain, battery, exterior styling and interior design, Palmer says the central display screen was by far the most complicated.

The center screen actually is positioned higher than the 10-in. (25-cm) digital gauge cluster above the steering wheel. Both screens are ideally placed without being a distraction for the driver.

From an interior styling standpoint, the Mach-E has more in common with the Escape CUV than the Mustang coupe. Seats are less aggressively bolstered, there’s more room in both rows and the general feel tilts toward utility than sleek and sporty.

All materials are synthetic and interior color choices are scant – “dark” and “light,” as Palmer says – with available red or blue contrast stitching. That’s not to say the interiors are dull. Ford generally succeeded in making an upscale interior while saving money to spend elsewhere, like on the HMI and drivetrain.

Pricing starts at $42,000 for the standard battery and RWD, minus the $7,500 federal tax credit and incentives that might be available in other states. A First Edition AWD model with extended-range battery comes well equipped for $59,800, including a $1,100 handling charge.

The Ford Pass Charging Network is being established with 13,500 charging locations across the U.S. One of the available charging sources, Electrify America, is offering 250 kWh of free charging for Ford customers. 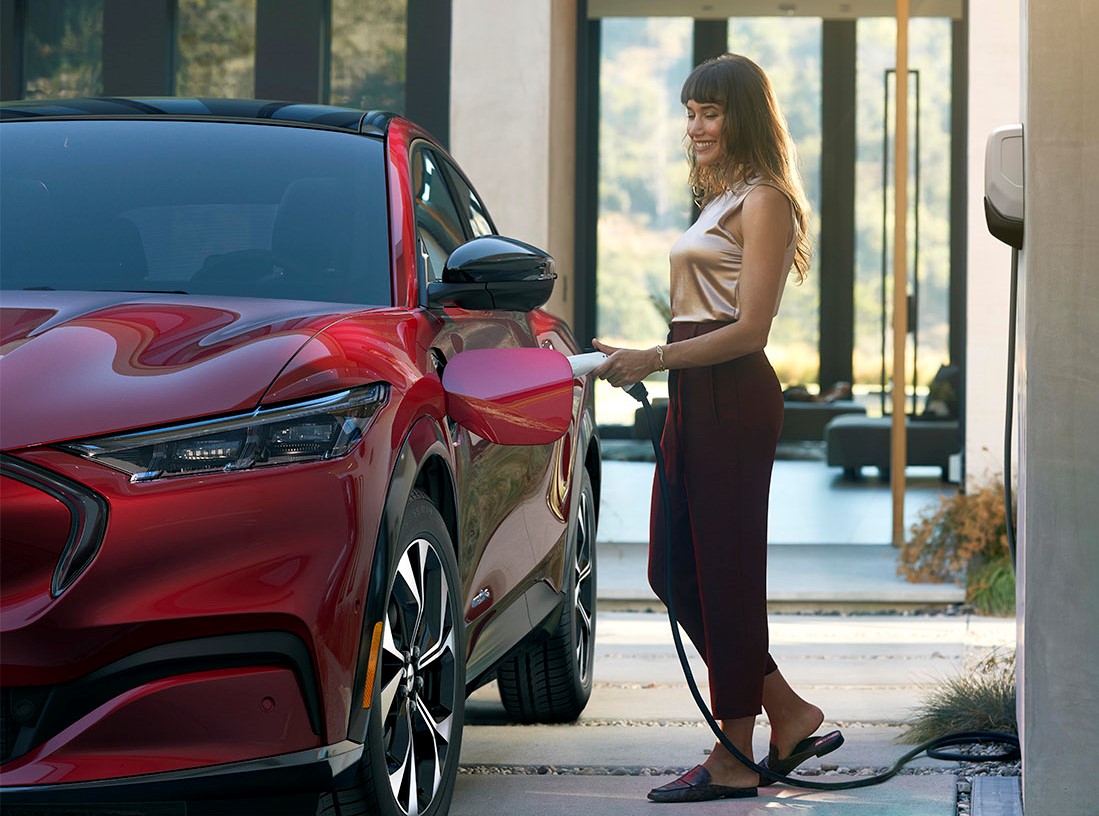 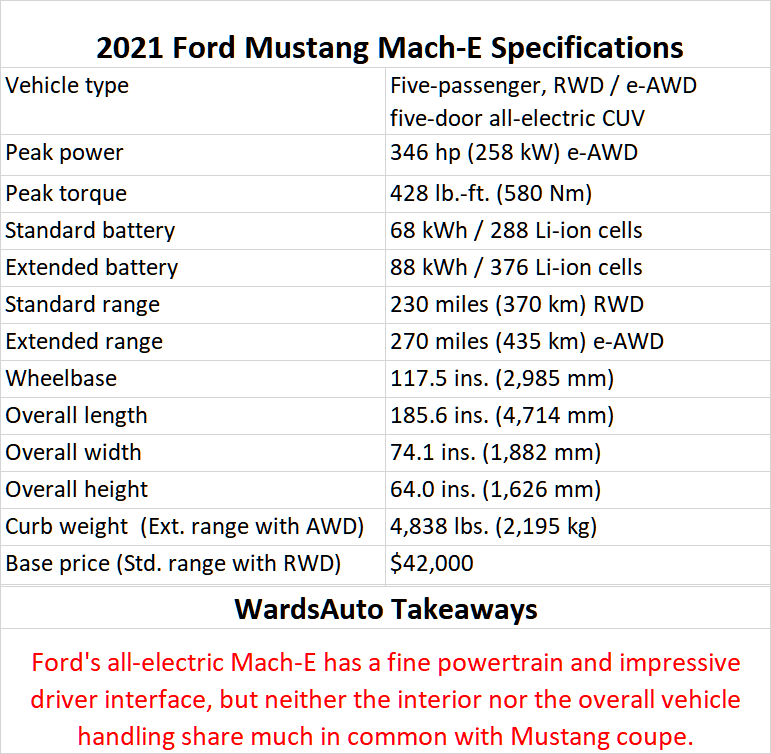