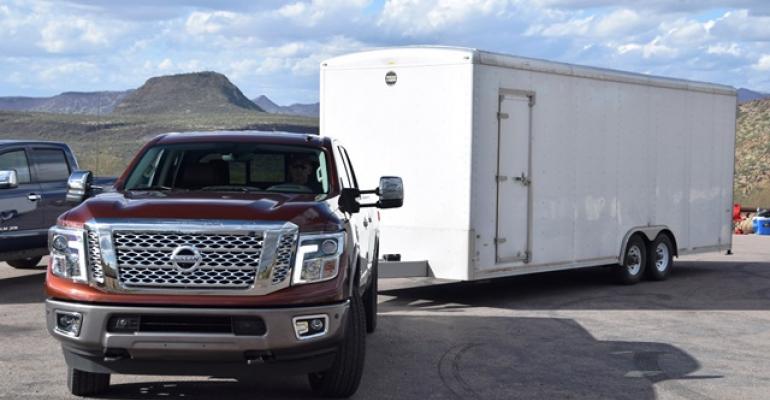 We’ve Been Here Before, But Not With a Cummins

Asian OEMs have tried to upset Detroit&rsquo;s dominance in fullsize pickups. With a stout 5.0L V-8 from diesel specialist Cummins, a stylish and functional interior and impressive offerings for those who tow, Nissan may have a grip on this U.S.-centric market.

FORT McDOWELL, AZ – It wasn’t a bad truck, but Nissan’s first fullsize pickup, the Titan, failed to break the seemingly fire-hardened bond between Detroit automakers and their loyal customers.

The original Titan launched in 2004 and has been mildly refreshed over the course of 11 looooong years, which explains why sales of the Titan have fallen from modest to embarrassing in recent times.

With the new Titan XD, Nissan has a solid plan of attack: Give shoppers all the flexibility they want; design in serious on-road presence and off-road credibility; clean up and seal up the interior; illuminate the bed; and get in the game with a premium offering worthy of well-heeled customers who are happy to spend more than $60,000 for a truck.

We’ve said this before about clever Japanese products seemed destined to upset Detroit’s apple cart – from the in-bed storage bin in the Honda Ridgeline to the burly ruggedness of the Tundra.

But this time around, Nissan is trying something completely different: Its ace in the hole is an engine designed and built by Cummins, an Indiana company whose diesel prowess in 18-wheelers, buses, motor homes, tractors and heavy-duty pickups immediately draws the attention of customers who normally wouldn’t give the Titan a second look.

There’s no mistaking this engine as anything but a diesel, especially at idle, but it quiets down on the highway. It’s not overly loud or prone to excessive vibration, but its NVH signature is more akin to Detroit’s heavy-duty diesels than Fiat Chrysler’s light-duty 3.0L diesel V-6 in the Ram 1500.

With the supremely capable 5.0L, the Titan XD can go anywhere, do anything. Most importantly, this twin-turbo V-8 may be a plow in fertile terrain, helping Nissan cultivate a small patch of neglected turf in the ground war that is the U.S. pickup market.

Returning to a Simpler Time

The strategy goes something like this: Truck customers who need to tow heavy loads historically opt for heavy-duty diesel pickups that reached torque ratings of 600 lb.-ft. (813 Nm) about a dozen years ago.

Back in the day, that was a monstrous number, until the Detroit automakers decided in recent years that 800 lb.-ft. (1,084 Nm), or close to it, would be the norm.

Before this arms race began, lots of customers were perfectly happy with their diesel towing capabilities. Since then, they have been overlooked: They want a diesel but don’t want to pay a premium as high as $10,000 for an engine that far outstrips their needs.

These customers want to go back to the torque levels of 2003, and Nissan hopes to lure these folks to their showrooms as their old trucks need replacing.

The automaker estimates 75,000 pickup buyers migrate from light-duty to heavy-duty trucks each year, and another 75,000 go the opposite direction. That’s a pool of 150,000 people who could find the Titan XD to be ideal, Nissan executives say.

The automaker isn’t saying how many it plans to sell, but its best year with the previous truck was 2005, when 86,945 units landed in U.S. driveways.

Nissan makes no bones about it: The new Titan XD is not a heavy-duty ¾-ton (680-kg) pickup. Instead, it aspires to be the most capable ½-ton (454-kg) truck on the market. Hence, the XD stands for “extra duty.”

Oddly enough, the Titan XD’s ratings of 12,314 lbs. (5,586 kg) for maximum towing and 2,091 lbs. (948 kg) for maximum payload fall roughly in line with those of the most capable Ford F-150 and Chevrolet Silverado, each powered with gasoline engines.

That explains Nissan’s claim that the Cummins V-8, mated to an Aisin 6-speed automatic transmission, will get up to 30% better fuel economy than its gasoline counterparts when doing heavy work.

However, observed fuel economy was not spectacular during our test drive here.

A standard exhaust brake lets the engine help with decelerating, preventing wear on the disk brakes at all four corners. With its advanced compacted-graphite iron block, the 5.0L V-8 weighs 800 lbs. and reaches peak torque at a low 1,600 rpm. Redline is 4,200 rpm.

Every piece of sheet metal is new on the Titan, as are the frame, suspension and interior.

Nissan left no stone unturned in attempting to surprise and delight customers with features such as the soft-drop tailgate, radar-based blindspot detection, 120V outlet in the bed, extensive storage under the second-row seats and an astounding 16 cupholders, including space in the center console that can accommodate two 32-oz. (946 mL) Gatorades.

That space was freed up when designers moved the gear shifter from the center console to the steering column.

In the bed is an integrated gooseneck ball and two cleats for hitching up a large trailer such as a fifth wheel. When it’s time to fill the bed with dirt or mulch, the cleats and gooseneck ball can be removed and those ports can be capped, making for easier cleanup.

There are five trim levels of the new Titan XD: the work-oriented S, volume-based SV, offroad-ready Pro 4X, upscale SL and top-of-the-range Platinum Reserve, a grade never before offered by Nissan, with premium black and brown leather and seat surfaces quilted to resemble a hunting vest.

Nissan expects the SV to be the volume leader, accounting for about 30% of the mix. An integrated trailer brake is standard on SV trim and up.

Going on sale in late December, the Titan XD is merely one implement in Nissan’s bid for traction in the truck market.

Around the middle of 2016, a gasoline version will arrive, powered by a retuned 5.6L direct-injected V-8, which makes 400 hp in the Infiniti QX80 SUV. A gasoline V-6 will come later, but Nissan is providing no details about the engine.

The automaker is playing up the all-American lineage of the new Titan: designed in California, engineered in Michigan, tested in Arizona, assembled in Mississippi and powered by a Cummins engine that comes straight from the heartland.

The automaker likely will succeed if the heartland embraces the new Titan.