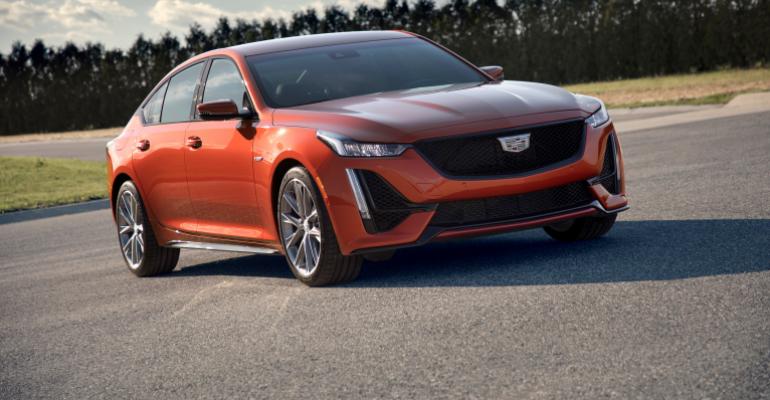 Cadillac’s latest performance sedan, the CT5-V, doesn’t pack the same kind of wallop as its predecessors, and that’s probably just fine for most buyers.

Let’s get this out of way up front: The ’20 Cadillac CT5-V isn’t anything close to the rip-roaring, race-bred, Nurburgring-tested, supercharged V-8-powered CTS-V that ended production last summer.

That said, make sure your butt is firmly planted and you have a tight grip on the wheel when you punch the accelerator of this latest version. This is no “V-Lite.”

Thrust from the 360-hp, 405-lb.-ft. (550-Nm) 3.0L twin-turbo V-6 punches hard to the rear axle where an electronic limited-slip differential sends it to the wheels with intensity bordering on savage. But then everything settles down, 60 mph (97 km/h) arrives in a swift 4.6 seconds and significantly higher velocity follows for those who dare not lift. 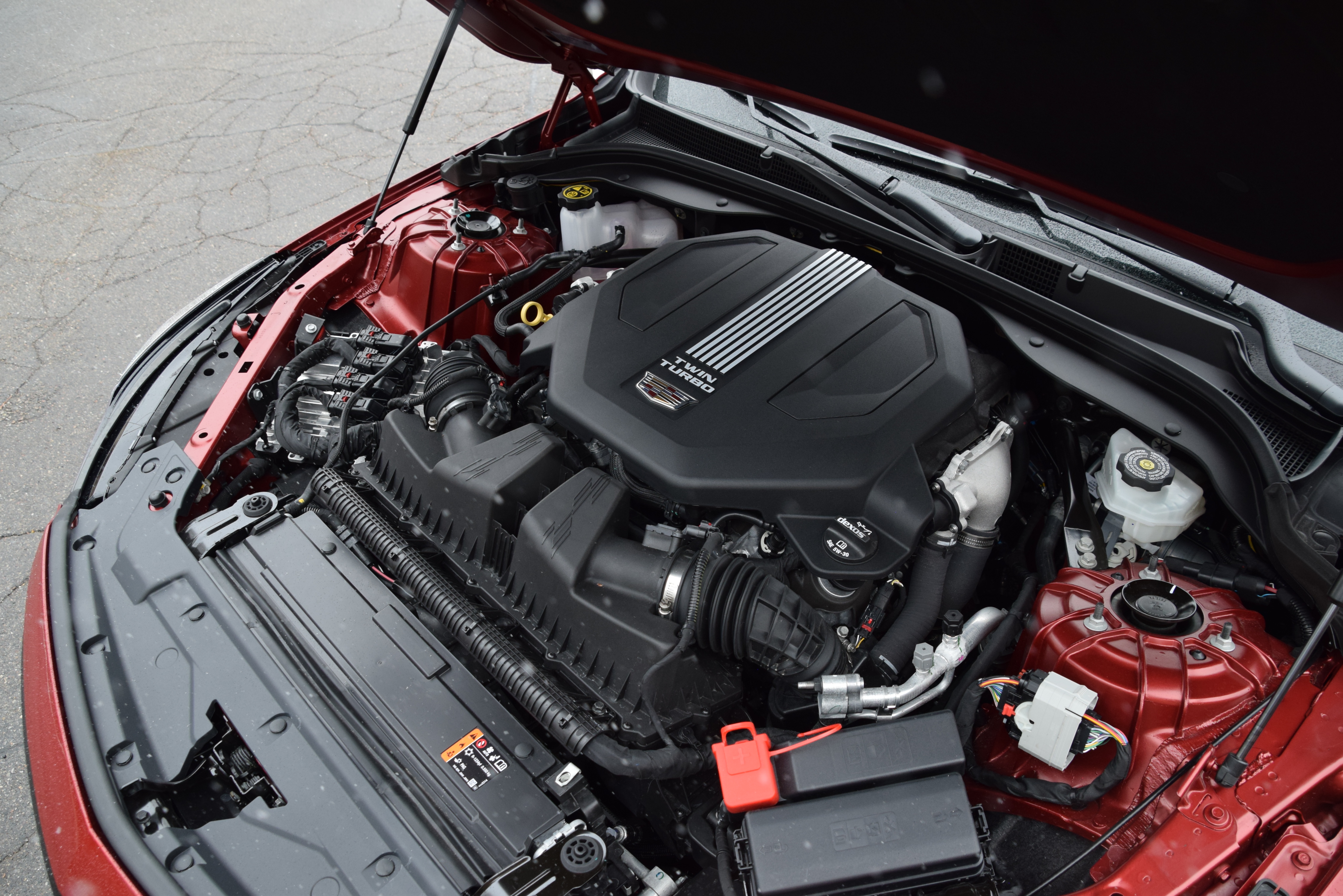 We do lift, because our test drives of the all-new CT5-V and its more sedate sibling, the CT5 Premium Luxury model, come not on a closed course, but on public roads in suburban Detroit under new restrictions imposed as a result of the coronavirus pandemic. The two antiseptically clean top-shelf sedans were dropped in the driveway in morning with the understanding they’ll be scooped up again late in the afternoon.

Time to drive, with no distractions, or even the usual co-driver.

The CT5-V gets your attention from the moment you push the keyless-ignition button, rousing the engine with a husky, electronically enhanced exhaust note. Immediately out of the gate, the CT5-V embodies what the brand calls “Isolated Precision,” the ability to be a performance car without beating you up in the process. 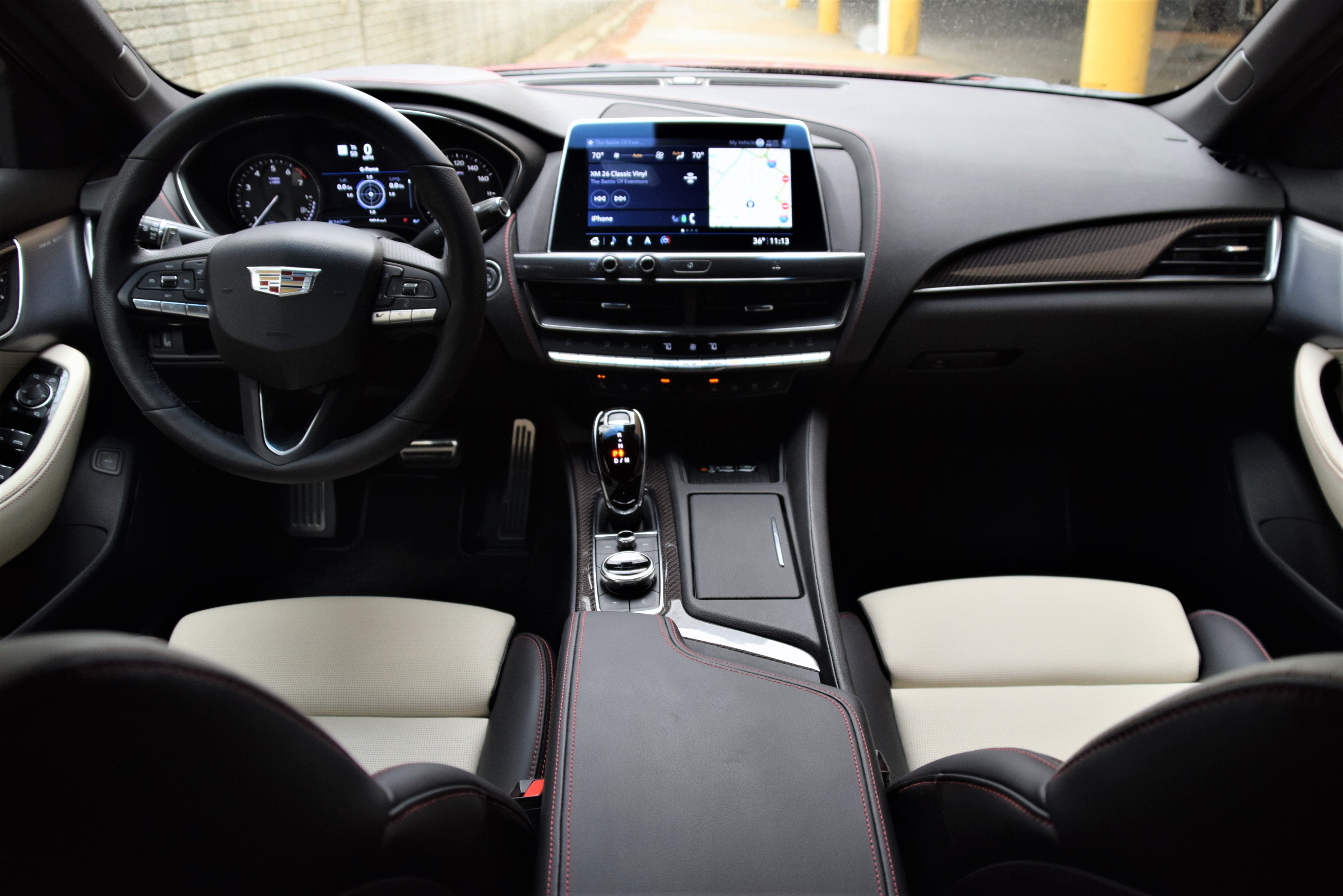 Tip the shifter into gear and the 10-speed automatic smoothly engages, the car rolling out in its most comfortable cruising Tour mode.

Clicking the rocker switch just ahead of the shift handle cycles through the drive modes: Tour, Sport, Snow/Ice and Track, as well as My Mode that allow the driver to tune the vehicle’s attributes – engine and transmission mapping, steering and braking response, suspension stiffness and exhaust sound – accessible via a steering-wheel V Mode button.

Double-tapping the traction-stability control button in Track mode negates all the electronic safeties and puts the car into full-blown Performance Traction Management mode.

Out on the road, swapping into Track mode significantly amps up the CT5-V’s reflexes, bringing a razor sharpness to the underlying Alpha platform that’s been lauded as on par with the segment standard-bearer BMW 3-Series since its introduction in the ’13 ATS.

Sticky Michelin Pilot Sport summer tires combine with the V’s Magnetic Ride Control 4.0 to hold the chassis solid, flat and predictable in hard cornering and under aggressive acceleration and braking.

Braking is phenomenal; the electronic power steering could use a touch more road feel but responds quickly, intuitively and accurately, especially in the amped-up Track mode. 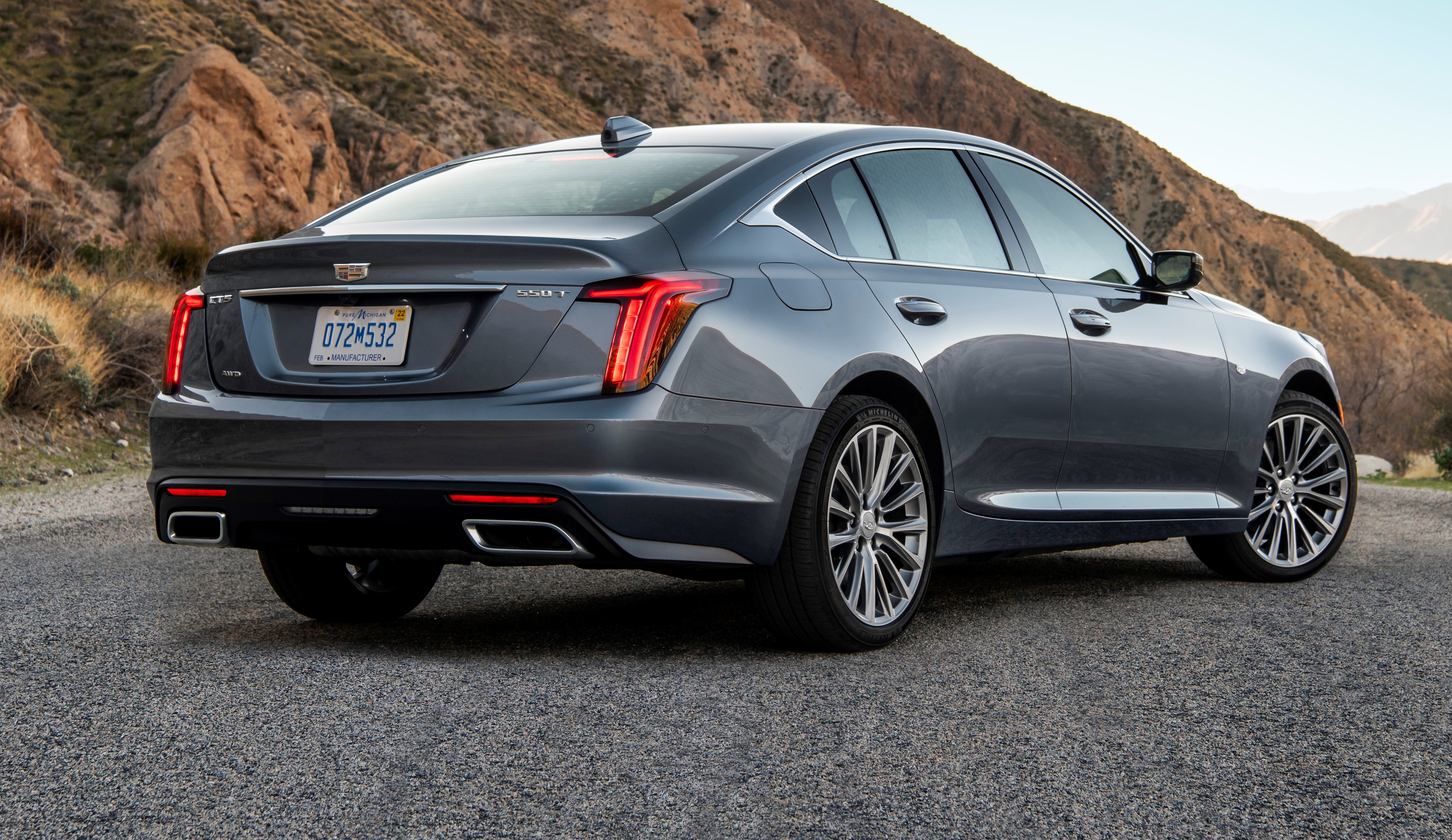 Inside the ride is quiet and relatively isolated but not vault-like, with enough engine and exhaust sound making its way into the cabin to be enjoyable without being overbearing. Thanks to the adaptive dampers, the car seems to glide over road imperfections. Seat comfort is supportive without being over-bolstered – it feels like one could ride here for many miles without fatigue.

We drove the $60,190 CT5-V back to back with the CT5 Premium Luxury trim (pictured above), a $4,620 downgrade. Compared to the V, the Premium Luxury model drops 25 hp but maintains the 405 lb.-ft. of torque from the same 3.0L twin-turbo engine, swaps active suspension for passive dampers, exchanges summer tires for Michelin Primacy Tour A/S Selfseal run-flats and eliminates the high-strung Track mode and V Mode button.

The V’s lightly massaging driver seat also goes away, but the Premium Luxury’s option list gains full-range adaptive cruise control. (Super Cruise comes to CT5 in the ’21 model year.) The changes combine to make the CT5 a smooth cruiser compared with V, with a much more subdued cabin.

Especially laudable in either CT5 is a cockpit and user experience that feels as though Cadillac, after years of zigzagging from one interior extreme to another, has finally settled on a nearly perfect combination of handsome materials, functionality and craftsmanship, exuding luxury with a sense of purpose.

Vehicle controls are accessible through multiple avenues – voice, touchscreen, multi-function controller, steering-wheel buttons and hard knobs and switchgear – but without the hard-to-comprehend interfaces of the recent past or the almost toy-like plastic buttons dating back to the original CTS.

A perfect example: Gone is the artsy but oddly touch-sensitive volume slider, replaced by a simple volume knob. An adjacent knob controls tuning for audio, but automatically swaps to other purposes such as a map magnifier when the navigation function controls the 10.0-in. (25.4-cm) high-resolution center screen. Simple and highly functional. 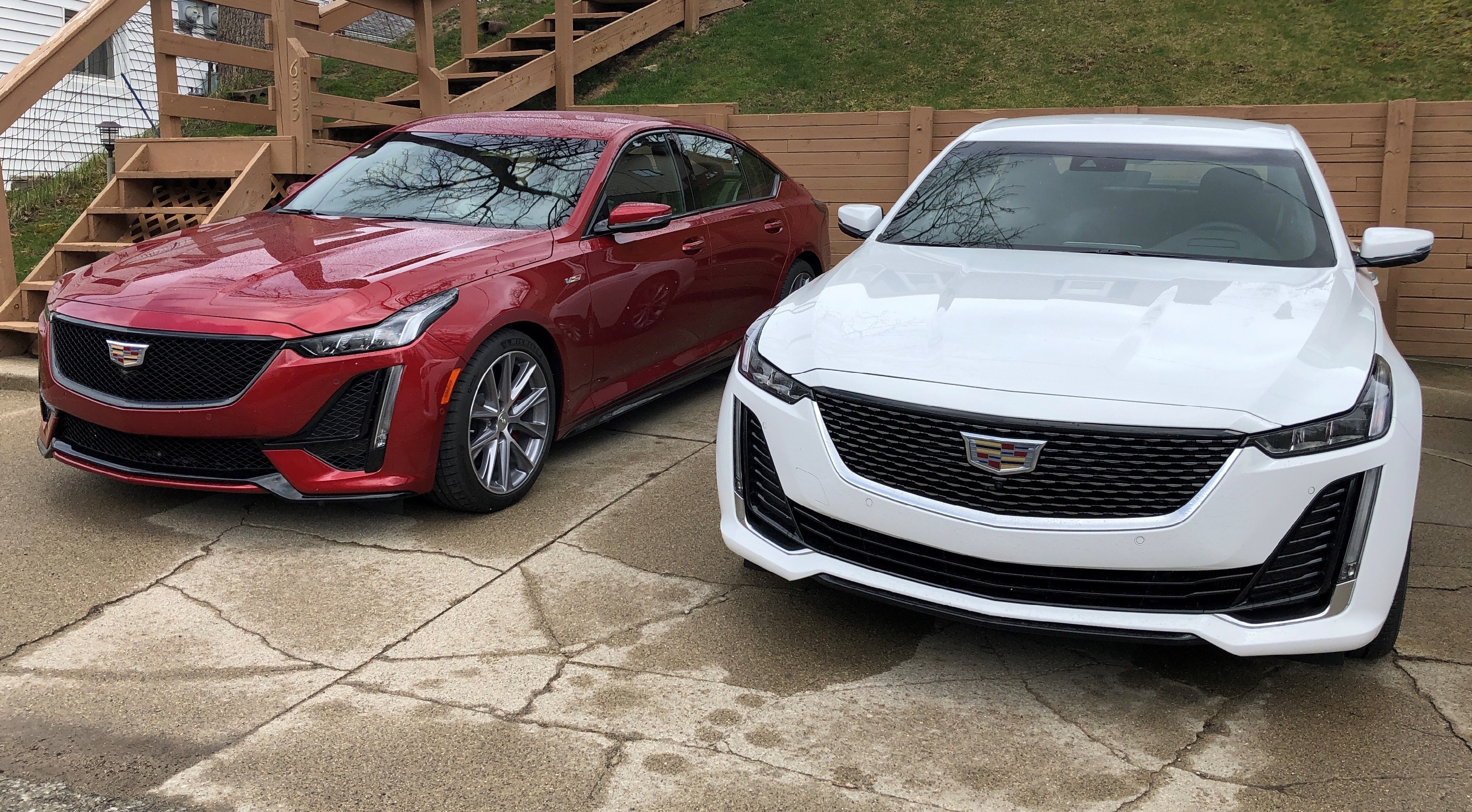 Cadillac engineers point out the CT5 and its smaller sibling, the CT4, benefit from GM’s new Vehicle Intelligence platform, a carefully engineered and secure electronic framework that enables 5G connectivity and over-the-air updates.

Ken Kornas, CT4/CT5 product manager, says the latest V-Series models expand the range to attract customers who want a performance sports sedan, but with all-wheel-drive and all-season tires as options – and a lower price.

For those who demand the kind of track-level performance packaged with V-Series past, Cadillac says the next level is on the way in the CT5 Blackwing due in mid 2021 (along with a CT4 Blackwing).

Despite the name, don’t look for the 550-hp Blackwing 4.2L twin-turbo V-8 under the hood. GM says that engine won’t fit in the Alpha platform but reports indicate another V-8, the 640-hp 6.2L supercharged beast from the predecessor CTS-V, may find its way into the CT5-V Blackwing. The CT4-V Blackwing’s engine is expected to be the 464-hp 3.6L twin-turbo V-6 from the ’18 ATS-V. Both cars will be offered with 6-speed manual or 10-speed automatic transmissions.

Why the Blackwing moniker? Cadillac likes the name, which traces its lineage back to the brand’s crest that featured black Merlette ducks reminiscent of the black birds prominent on the coat of arms of Detroit founder Antoine de la Mothe Cadillac.

For now, we’ll have to accept that GM’s expensive investment in the high-feature Blackwing V-8 may have achieved its half-life in the equally short-lived CT6-V that went out of production early this year.

However, Brandon Vivian, Cadillac executive chief engineer, provides some hope. On a recent episode of “Autoline After Hours” Vivian says while the Blackwing engine wasn’t the right “solution” for the CT5-V Blackwing, General Motors continues “to look for opportunities to reuse that engine.” 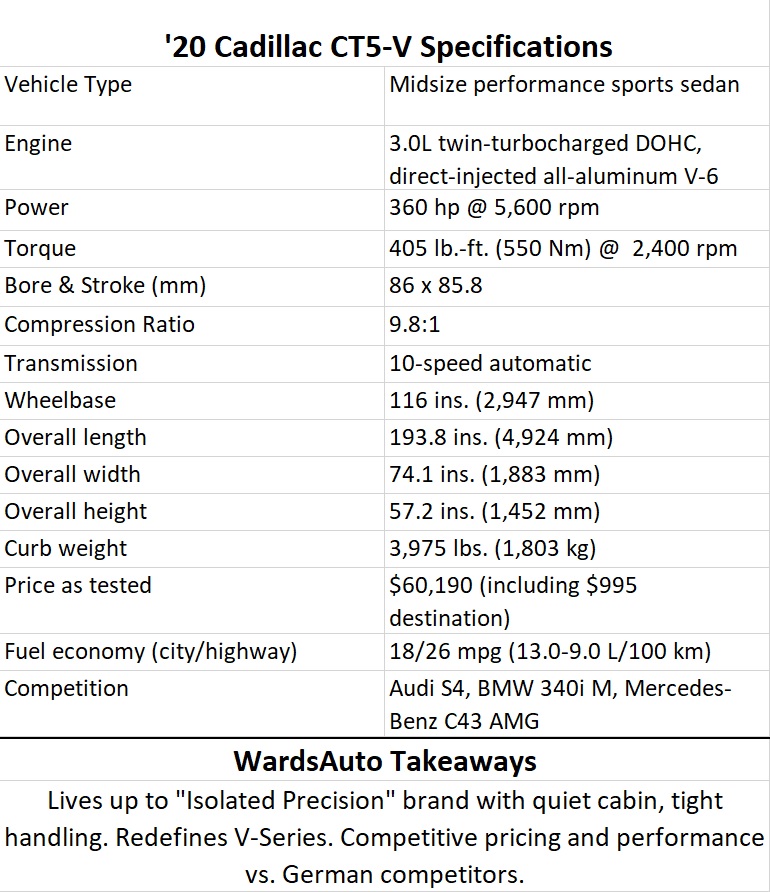