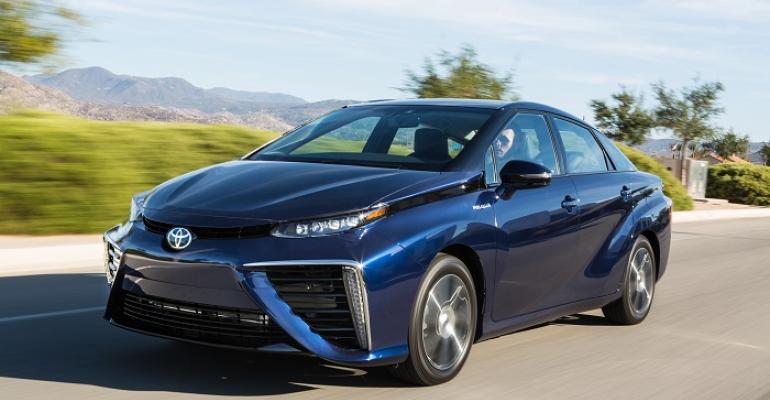 The FCV&rsquo;s fun-to-drive nature is a surprise, but so is the compressor noise and limited passenger space.

NEWPORT BEACH, CA – From the automaker that brought us the Prius comes the Mirai.

And Toyota hopes you make that connection, too.

But there are a couple things one can pick apart about the belief that the Mirai hydrogen fuel-cell car, on sale or lease in fourth-quarter 2015 in California, can replicate the success of the Prius gas-electric hybrid.

But if anyone can sell a green car to skeptical Americans, it’s Toyota. Even after the damning unintended acceleration debacle it went through five years ago, Toyota’s reputation for quality remains virtually untarnished.

And so darn many of those Priuses on the road and in American families’ garages adds a good deal of credibility to Toyota’s alternative-powertrain R&D.

Taken on a short jaunt here in suburban SoCal, the Mirai 4-door FCV, on sale in fourth-quarter 2015 in California, is less the science experiment previous FCVs were, but still has some issues that make it not quite as market-ready as it needs to be.

The car is fast off the line and fairly fling-able. However the noise generated by the Mirai’s propulsion system is more pronounced than that heard in a recent drive of the Hyundai Tucson FCV CUV, currently for lease in select California markets. It is even louder than the previous-gen Toyota FCV, the Highlander-based FCHV-adv.

That din is more noticeable in the Mirai due to the fuel-cell stack’s placement under the driver and passenger seats. The noise, caused by compressors operating, should be reduced when the car arrives in market late next year, knowing Toyota’s reputation for kaizen (continuous improvement).

Unlike the sluggish Prius, the Mirai is speedy off the line, with 247 lb.-ft. (335 Nm) of torque from its electric motor arriving at throttle tip-in.

The car’s 151-hp AC synchronous electric generator/motor is powered by electricity created by the reaction of hydrogen and oxygen in the fuel-cell stack.

The stack’s output density of 3.1 kW/L is an achievement, Toyota says, up from the FCHV-adv’s 1.4 kW/L. The next-generation Honda FCV due in 2016 is expected to match the figure.

Toyota can claim the title for the most powerful fuel-cell stack in total output for now, too. The Mirai’s stack makes 114 kW (153 hp), more than the Tucson’s 100 kW (134 hp), but the same mark the next-gen Honda is expected to hit.

The Mirai’s 300-mile (483-km) range is on par with the Tucson and forthcoming Honda.

But the make-or-break point for most of the vehicles likely will have less to do with technical specs and more to do with how livable they are.

The design of the Mirai is polarizing, but then again so was the Prius. Described by Toyota North America CEO Jim Lentz as having a “catamaran” appearance, the Mirai won’t be for everybody, but at least its outward look reflects the advanced nature of its ground-breaking technology.

The look-at-me-I’m-driving-an-FCV tact is the antithesis of the route Hyundai has taken with the Tucson FCV, which barely is distinguishable from its internal-combustion-engine brother.

If FCV intenders find the Mirai’s exterior agreeable, the car’s interior may be harder to digest.

The cabin, while comfortable, has a lot of hard-plastic trim. Yes, the Mirai technically isn’t a luxury vehicle, but at nearly $60,000 it begs for fancier finishes.

At least the capacitive-touch switches to control heating and cooling functions are befitting of the car’s price point, as are standard goodies such as a heated steering wheel, heated seats and blindspot detection.

The Mirai has seating for four, a fact borne not out of propulsion-system intrusion, but a feeling within Toyota that a bench seat is just too down-market for a car costing $57,500. Toyota, have you not heard the gripes about the 4-seat Chevy Volt? Americans want the middle seat, even if they use it just once a year.

Let’s face it, CUVs are the hottest vehicle type right now. People like to sit up high. Why Toyota didn’t continue on the FCV path with the Highlander or another CUV is a mystery.

As stated, the Mirai will be $57,500 to buy. Toyota is allowing direct sales, as research shows tech-y, first-adopter types want to own, not lease, new technology. But an outright purchase should account for only 10% of all Mirai sales, as Toyota expects 90% of buyers will lease.

Tax incentives to offset the purchase cost will be available, but it’s unclear by how much. The federal incentive of up to $4,000 for FCVs is due to expire Dec. 31; state incentives vary.

Like Hyundai has done with the Tucson, only dealers hand-picked by Toyota, likely those closest to the publicly available hydrogen refueling stations, will carry the Mirai. This avoids the potentially embarrassing issue of an owner running out of hydrogen.

Toyota, unlike Hyundai, has some skin in the game and is supporting the rollout of hydrogen stations via a loan to FirstElement Fuel and a partnership with Air Liquide. The latter tie-up will see stations in the Northeastern U.S., in the states that follow the California rules for zero-emission vehicles. Toyota expects to begin selling the Mirai in those states in 2016.

While doing something different than it has been done for more than a century is to be commended, it’s hard to see the Mirai having the same impact as the Prius, at least in the same 14-year timeframe the Prius has been available in the U.S.

Even battery-electric vehicles, with their range-limited lithium-ion batteries, can be charged via any 120V outlet, of which there are millions in the U.S.

The near-term projections for U.S. hydrogen stations puts their total number in the low hundreds through 2020.

Some like to point out there was very little infrastructure for cars in 1908, but the Model T obviously was more alluring than a horse and buggy.

Is the Mirai more alluring than a Prius, or a Camry, or a RAV4? For some, the answer will be yes. But for the next 10-20 years, most car buyers will say no.