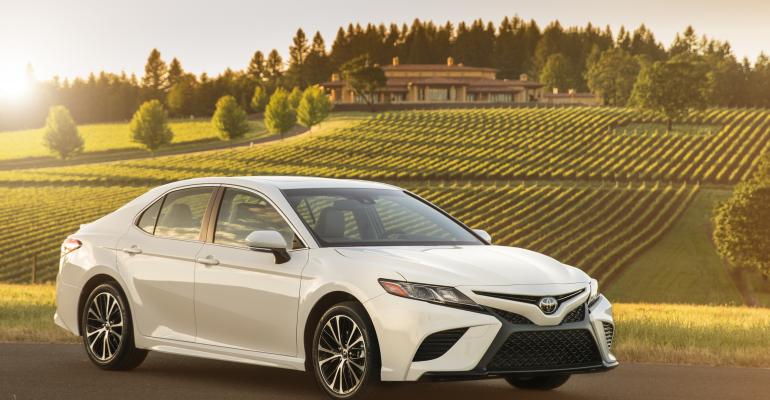 Despite segment sales being off nearly 18% so far this year, Toyota is putting full firepower behind the new Camry&rsquo;s launch, with plans for a record marketing spend that will be twice that for the previous model.

NEWBERG, OR – U.S. buyers have been avoiding the midsize-sedan market in droves as they migrate to CUVs.

But Toyota is a long way from giving up on the segment, rolling out a stable of new Camry models that cover the gamut from ultra-fuel-efficient to sporty in one of the automaker’s most aggressive efforts in the sector to date.

What’s more, Toyota largely succeeds in its mission. To say this is the best Camry ever would be damning with faint praise. More precisely, the eighth-generation midsize sedan meets its fun-to-drive objectives spot on, delivering the type of road dynamics that are likely to silence critics once and for all.

Despite segment sales being off nearly 18% so far this year, Toyota is putting full firepower behind the new Camry’s launch, with plans for a record marketing spend that will be twice that for the previous model and cover the entire media gamut from print to radio to television and the Internet.

“This will be our largest Camry effort ever,” Jack Hollis, general manager-Toyota Div. for Toyota Motor North America, says of the campaign that includes eight unique television spots to roll out in September highlighting various features of the new sedan. “We see an opportunity.”

The new model isn’t perfect – a little more could be invested in some of its interior trim, and its exterior styling, while distinctive and varied among the car’s bevy of trim levels, will be a hit or miss with consumers depending on point of view.

But overall, the Camry provides a high degree of bang-for-the-buck value in a smooth-riding, quiet and well-mannered sedan. Our test drives here progressed from the most fuel-efficient hybrid model to the base 4-cyl. and on to the top-of-the-line V-6, and the successive bumps up in power and performance never disappointed.

At the core of the hybrid powertrain is a 176-hp version of the new 2.5L that produces 163 lb.-ft. (220 Nm) of peak torque and is combined with a pair of electric motors, one of which is used only for battery charging. New is an Auto Glide Control that reduces engine braking to allow the car to coast more freely approaching a stop. It works only when the car is in eco mode and alerts the driver it is in operation through an indicator light on the instrument panel.

Also new is a sport driving mode for the hybrid that quickens response to accelerator-pedal inputs and provides a little more power to the front wheels.

Hybrids stick with a CVT, now with Sequential Shiftmatic technology enabling drivers to manually paddle-shift through six virtual gears. But other models get a new 8-speed automatic transmission as standard, replacing the outgoing car’s 6-speed.

In our driving loops through wine country here, all three powertrains meet expectations. The base, highest-mileage hybrid is not at all unpleasant to drive. With its battery now packaged neatly under the rear seat and no longer compromising trunk room, weight is balanced more optimally and you don’t feel as if the car’s tail is dragging.

Power is adequate, and the CVT largely goes unnoticed throughout our test. But the biggest wow factor is the fuel economy. The Camry delivers Prius-like numbers in what many will consider a more attractive and usable package that’s worth the extra money. Our drive confirmed the EPA data, as we averaged better than 53 mpg.

The base 4-cyl. (the volume seller that is expected to account for roughly 85% of volume) offers a good compromise between performance and fuel efficiency. Tooling around in traffic, the engine initially appears rather pedestrian, but pinning the throttle as the elevation climbs elicits strong response. The 8-speed can get busy at times, but shifts are smooth and for the most part noticeable only if you’re paying close attention.

If more power is needed, the V-6 is the answer. Although maximum output is a bit lower than that offered by the all-wheel-drive Ford Fusion Sport’s V-6, the front-drive Camry evens up the score by tipping the scales at a few hundred pounds less.

But the real surprise and delight comes from car’s new emphasis on handling. Never a hallmark for Toyota, chassis engineers nailed it when it comes to the driving dynamics of the new-generation sedan, thanks in part to careful tuning of the car’s new double-wishbone rear suspension. In a comparison with some competitors, the Camry still may lean toward the softer end of the scale, but the balance struck here between precise steering and a comfortable ride is impressive none the less and a likely perfect fit with what buyers will demand.

If there was a miss with the last-generation model it was with the car’s styling. Although Toyota tweaked all exterior body panels on the ’12 Camry, it had little visual effect, making side-by-side comparisons with the ’11 model the only sure way to tell the difference.

This time around, designers followed CEO Akio Toyoda’s no-more-boring-cars edict and shook off any urges to play it safe. Like it or not, the NASCAR-inspired ’18 Camry strikes a much bolder stance.

Among exterior features are a new 2-piece grille Toyota says is meant to be a hallmark of the Camry’s new “Keen Look” design philosophy. Grille and fascia treatments are different among the hybrid, 4-cyl. and V-6 models to help distinguish the trim levels. The car also boasts a lower beltline, wider stance, more expansive windshield, optional LED headlamps and available 19-in. wheels on XSE models.

The design is a welcome departure from past Camrys, but it allows the car merely to catch up to the pack, not pass it by, as other midsize models longer on the market, such as the Mazda6, Fusion, Kia Optima and Chevrolet Malibu, still appear fresher and more forward-leaning to us.

Inside Toyota has cleaned up the instrument panel, with the focus around a single infotainment screen ringed by convenient dials for radio volume and tuning and climate-control operation. Sweeping lines and layers give the IP its share of styling flair.

Some things could have been executed better, particularly in the lower-priced trim levels. The center console in the base hybrid, for example, features a large, texture-less flat-black panel that exudes bland. Inner-door panel designs also would benefit from a little more imagination. But most of that clears up as you progress into higher trims.

There’s plenty of tech stuff, including a new-generation Entune connectivity system with 4G WiFi that can accommodate up to five mobile devices. An 8-in. (20-cm) center screen is standard in V-6 models and optional in others, and there’s also an available 10-in. (25-cm) color heads-up display that is a Toyota first. Standard navigation works via an app on your smartphone, but V-6 models can be purchased with an onboard navigation system that includes over-the-air map updates as part of a complimentary 3-year subscription service.

Safety Sense (including pre-collision system, pedestrian detection, radar cruise control and lane-departure warning) is standard, as is blindspot monitoring and rear cross-traffic alert. The available bird’s-eye-view parking-assist system is a Camry first. Also new is the electronic parking brake offered in some models, which includes a brake-hold feature activated via a button on the console.

Sadly, neither Android Auto or Apple CarPlay are available, a big miss in our book, particularly if enticing younger buyers is a key part of the marketing agenda.

Toyota paid a lot of attention to minimizing noise, vibration and harshness in the seventh-gen Camry launched for the ’12 model year to great effect, and engineers built on that effort to further improve the ’18 rendition that hits showrooms in mid-July.

The new TNGA platform (Toyota New Global Architecture) offers 30% increased torsional rigidity, Toyota says, enhanced with laser screw welding for increased joint rigidity and high-rigidity urethane adhesive around the windshield and rear window. Stepped-up sound-absorbing insulation at the hood, fenders, firewall and other areas equal that found on luxury cars, the automaker says. We find that to be true; the Camry is ultra-quiet for a sedan in this price class.

For Toyota buyers looking to move up from a Corolla or replace their current Camry, the ’18-model midsize sedan may be a no-brainer. But with its new emphasis on style, handling and performance, as well as eye-popping fuel-economy numbers in hybrid form, the new Camry also should have greater appeal to shoppers coming from other brands.

At least, that’s what the new model is designed to do as Toyota makes its biggest bet yet on the staying power of the U.S. midsize-sedan market.