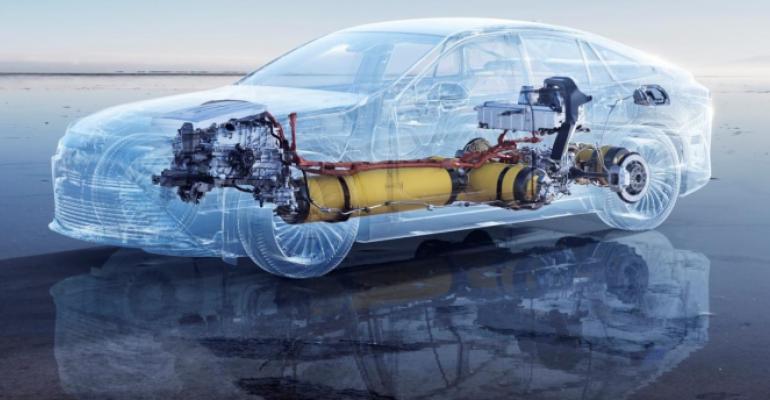 Toyota Doubles Down on Fuel Cells With Redesigned ’21 Mirai

Steam methane reforming is the most common method of producing hydrogen fuel, according to Shell’s New Energies division.

This process generates carbon emissions because it uses natural gas. Fuel-cell electric vehicles (FCEVs) require hydrogen fuel to work, and while they emit nothing but water vapor and heat, the procedure to manufacture the hydrogen has come under fire by critics of the technology and of the investment necessary to build a supporting infrastructure.

Additionally, Shell is collaborating with Toyota to build hydrogen refueling stations for a fleet of Kenworth heavy-duty trucks equipped with the automaker’s fuel-cell powertrain technology, the first step toward replacing the source of 70% of air pollution in the state of California, according to the California Air Resources Board.

Toyota is committed to FCEVs, both for commercial and personal transport. As evidence, the sensational new 2021 Toyota Mirai encapsulates the company’s state-of-the-art approach to the technology, wrapped in seductive new body work and equipped with the latest infotainment and driver-assistance systems.

Mirai moves to a rear-drive platform for 2021, the same GA-L component set that forms the foundation of the Lexus LS. The switch improves the car’s design, packaging and driving dynamics, which ought to make it more appealing to customers in California, where hydrogen refueling infrastructure for the car exists and is growing. A handful of Mirais also will be offered in Honolulu, HI.

Equipped with more power and greater driving range than the original version of the FCEV, the ’21 Mirai employs a smaller and lighter 650V fuel-cell stack generating 128 kW of power. According to Toyota, this is a 12% increase over the previous Mirai.

The car’s rear-mounted electric motor produces 182 hp and 221 lb.-ft. (300 Nm) of torque, an increase of 31 hp and decrease of 26 lb.-ft. (35 Nm). A Toyota spokesperson explains that because the motor spins faster and uses a different drive ratio, it actually makes more torque, but due to standard calculation methods the figure appears to be lower.

Excess electricity is stored in the car’s air-cooled battery and is used to power the Mirai during initial acceleration before handing off the source of propulsion to the fuel cell.

In the ’21 Mirai (pictured below), battery construction switches to lithium-ion instead of nickel-metal hydride, and, similar to the fuel-cell stack, it is smaller and lighter but offers higher capacity. The battery lives between the rear seat and the trunk, and while cargo space measures just 9.6 cu.-ft. (272 L), Toyota says the Mirai can hold three sets of golf clubs.

Three 10,000-psi carbon-fiber-reinforced high-pressure storage tanks hold approximately 11 lbs. (5 kg) of compressed hydrogen fuel. Two are mounted transversely under the Mirai’s back seat, while the third is located longitudinally in the middle of the car.

Toyota assures us the tanks are engineered to comply with global safety regulations governing compressed hydrogen storage, and says it performs a range of safety tests to ensure their integrity in a collision.

During a brief drive of the ’21 Mirai in Southern California, the car’s added power, lower center of gravity, lighter components and more sophisticated suspension produce dramatic improvement in driving dynamics (interior pictured below). 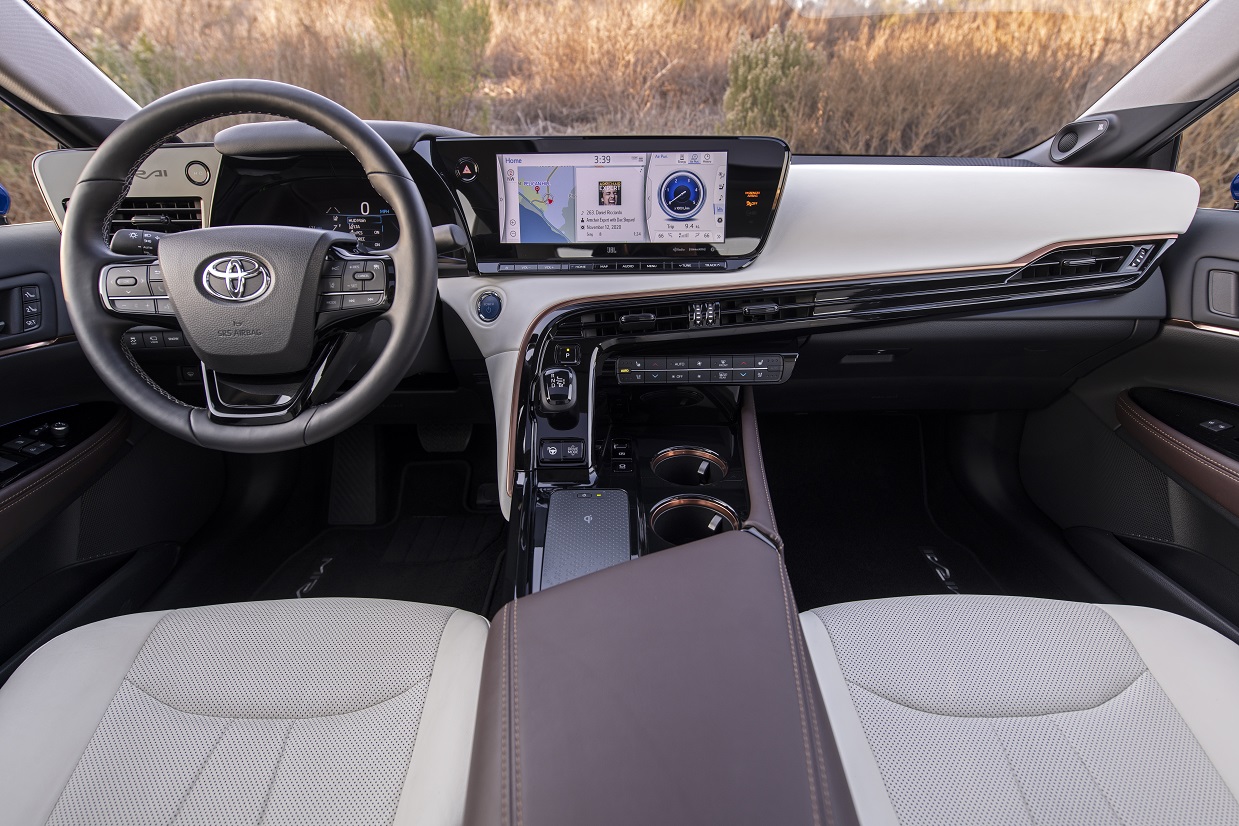 Though the Mirai will get left in the dust of a Tesla Model 3, it supplies plenty of the low-end grunt and mid-range responsiveness that is most useful in daily driving. It certainly feels quicker than the claimed 9.2-second acceleration time to 60 mph (97 km/h). 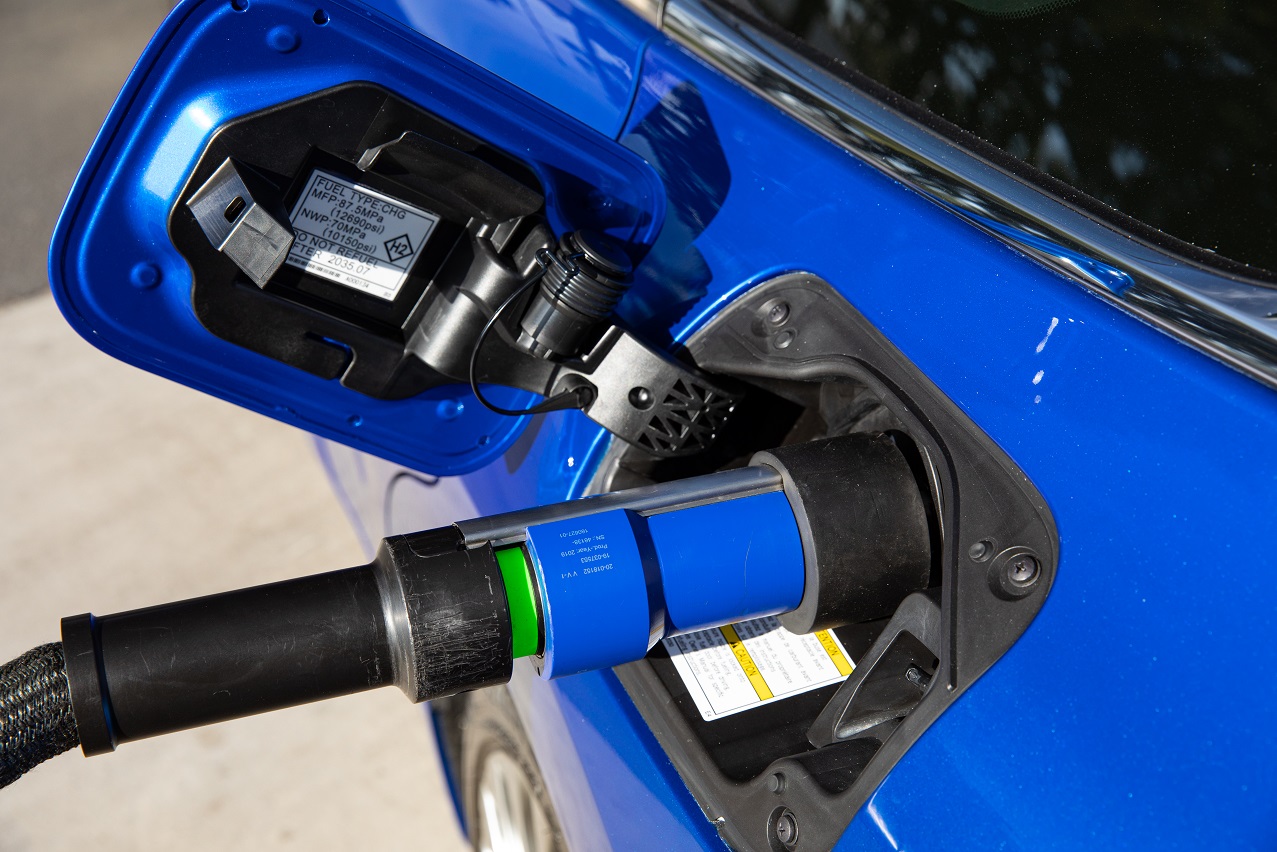 We did not get a chance to explore the maximum range in the real world, but upon completion of a 74-mile (119-km) test drive the trip computer said the car averaged 53 MPGe. Keep in mind this included mountain driving, acceleration testing and switching between Eco, Normal and Sport driving modes (fueling process pictured above).

Toyota does a great job with the Mirai’s ride and handling. Multi-link front and rear suspension designs expertly manage the car’s 4,255-lb. (1,930-kg) curb weight, and while the steering offers little in the way of road feel, its predictable and linear response and effortless electric assist are perfect for parking, commuting and long freeway stints.

Switching the car into Sport mode firms up the steering for a more engaging sensation. The regenerative brakes behave well, too, though on occasion they feel grabby and difficult to modulate.

Designed for five passengers but best used for four, the Mirai is comfortable for the driver and front passenger. Rear-seat room is tight, but shorter adults won’t complain. Interior quality and materials impress, and the Mirai Limited looks and feels more like a Lexus than a Toyota, inside and out (underhood pictured below). 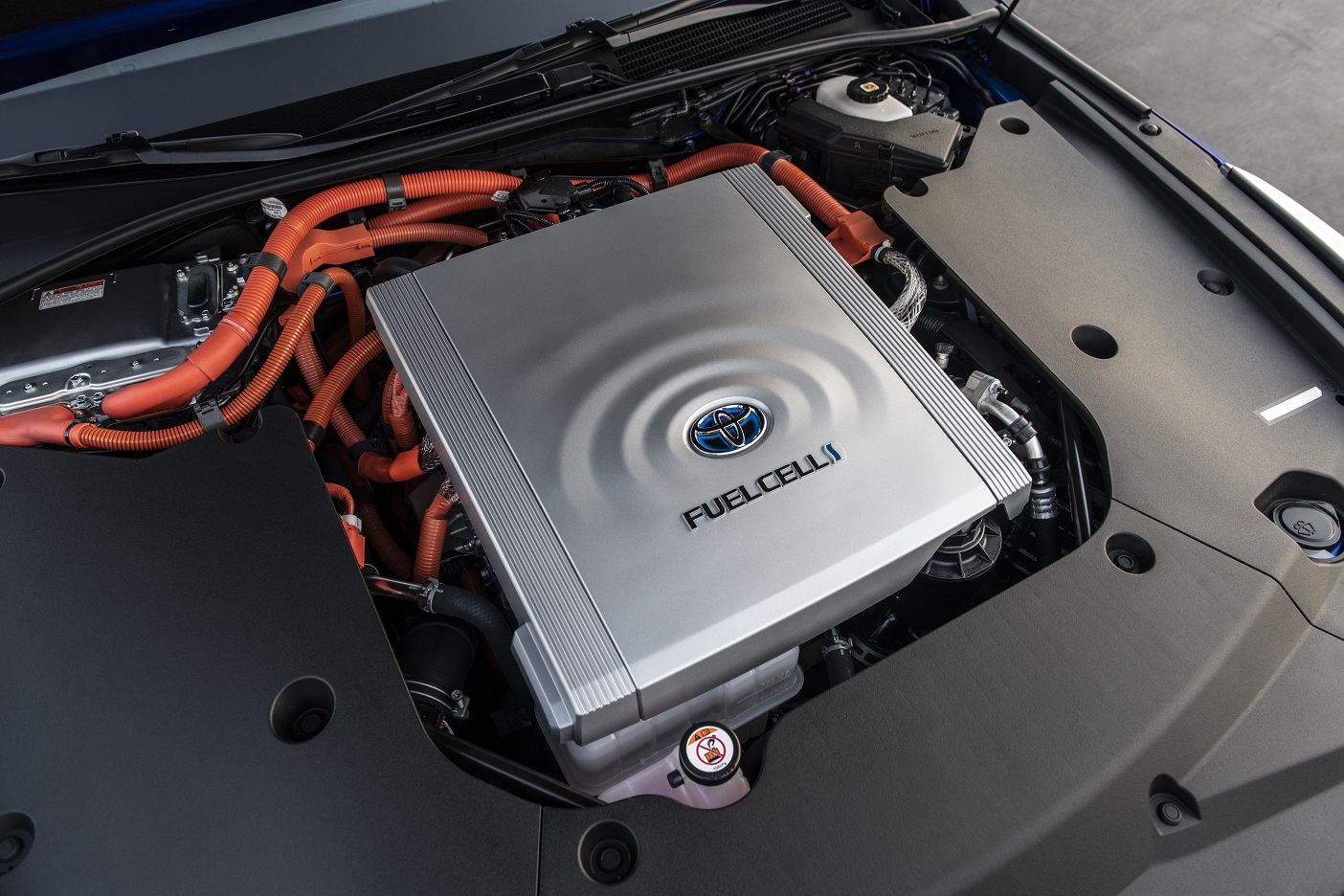 Digital instrumentation and a 12.3-in. (31-cm) touchscreen infotainment system are standard, and Toyota equips the ’21 Mirai with its full collection of connected services, dynamic voice recognition and dynamic navigation.

Toyota Safety Sense 2.5+, the automaker’s latest suite of advanced driving assistance systems, is also standard. During our drive, the Mirai’s technology proves intuitive to use and both accurate and effective.

Available in XLE and Limited trim, the ’21 Mirai is priced from $49,500 before applying the federal income tax credit or state and local incentives. That’s $9,050 less than the previous-generation car. You can purchase the Mirai outright or you can lease the car for $499 (XLE) or $549 monthly (Limited). 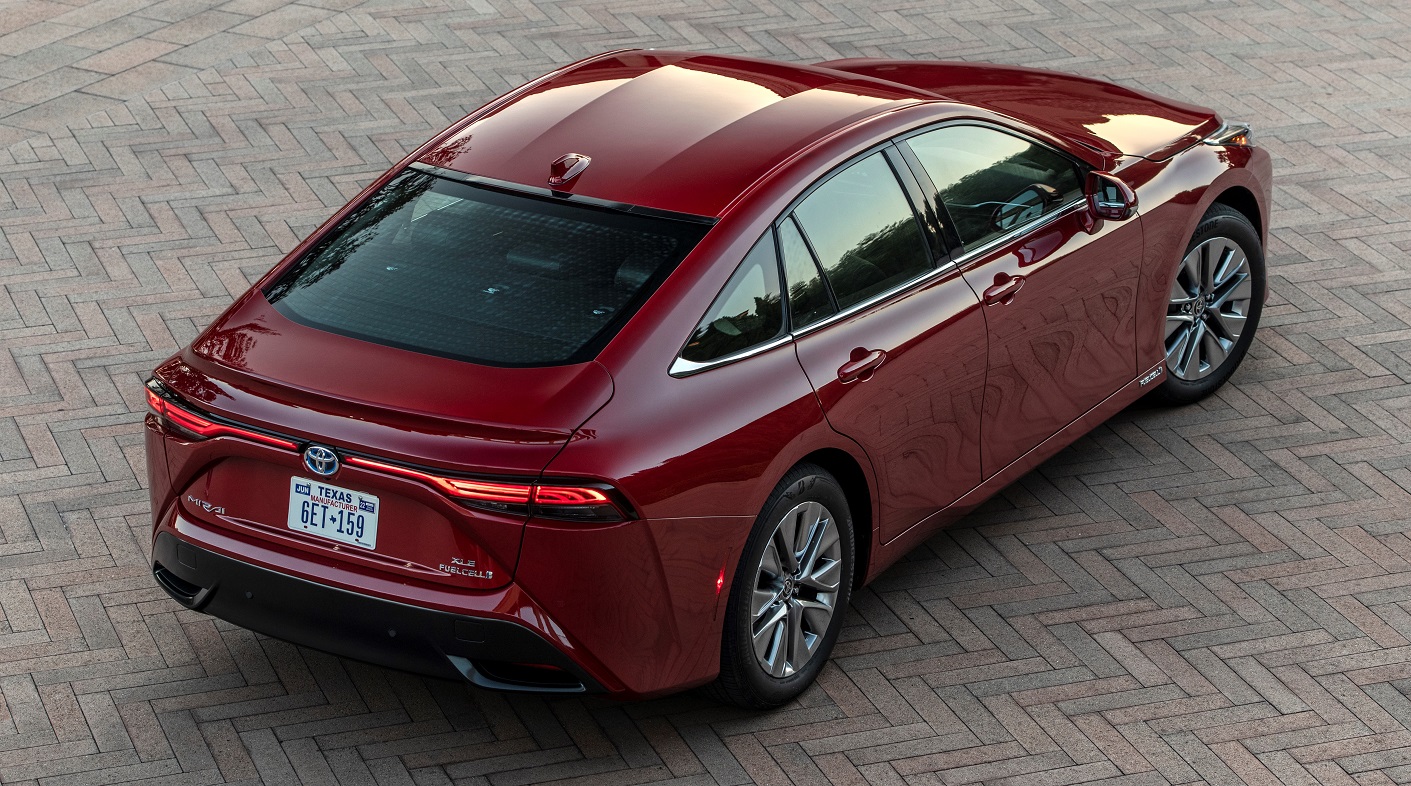 Every Mirai includes $15,000 in free hydrogen fuel issued via debit card, but you must use it within three years of purchase or lease initiation.

The ’21 Mirai (interior pictured below) arrives in selected California dealerships at the end of December. 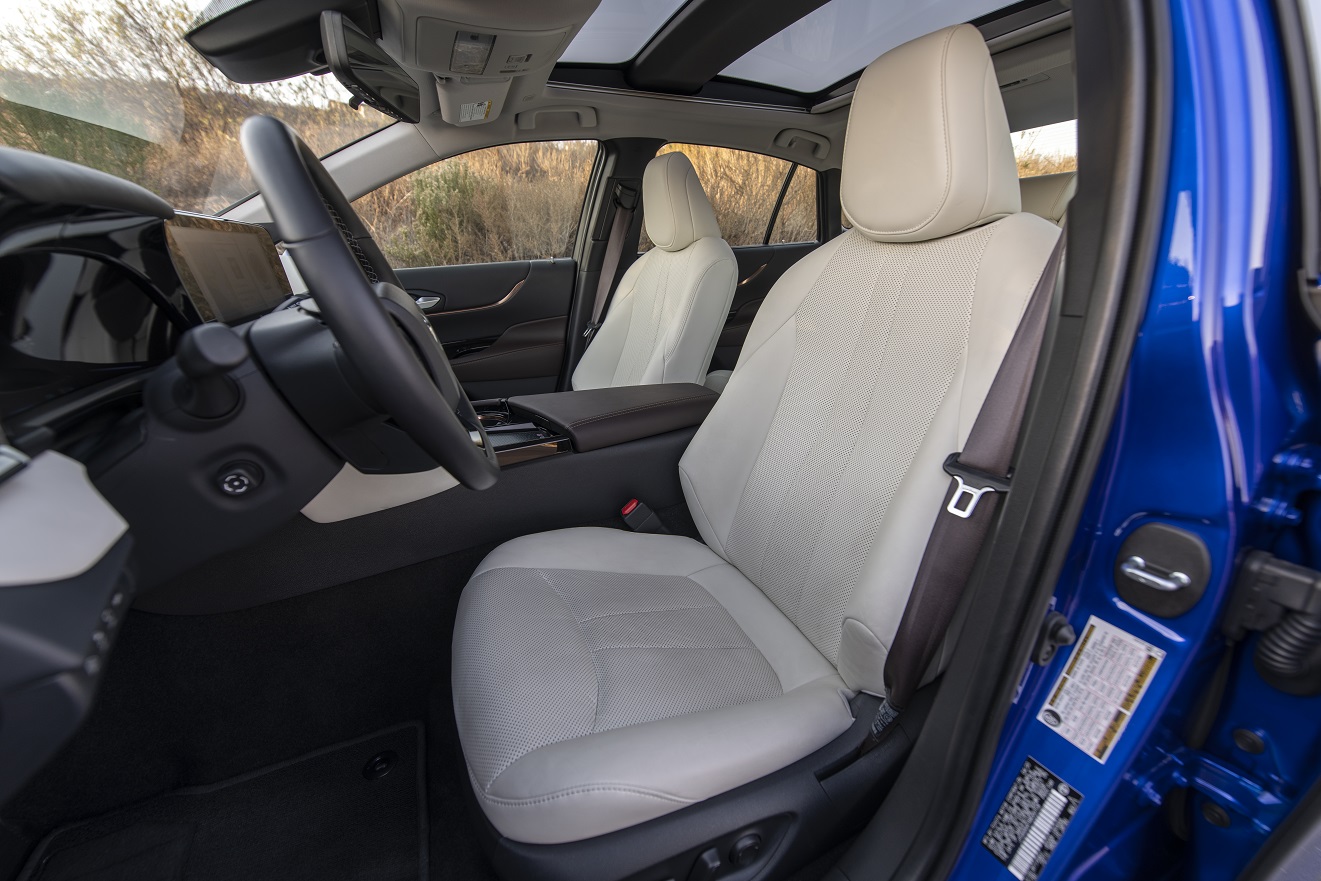 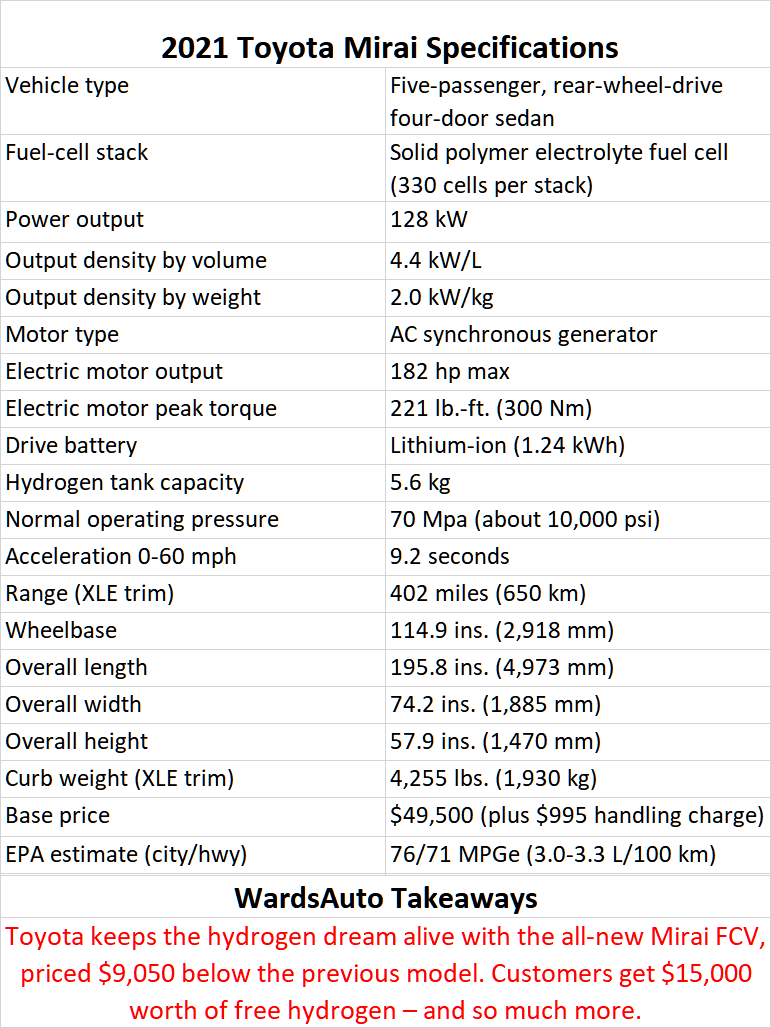