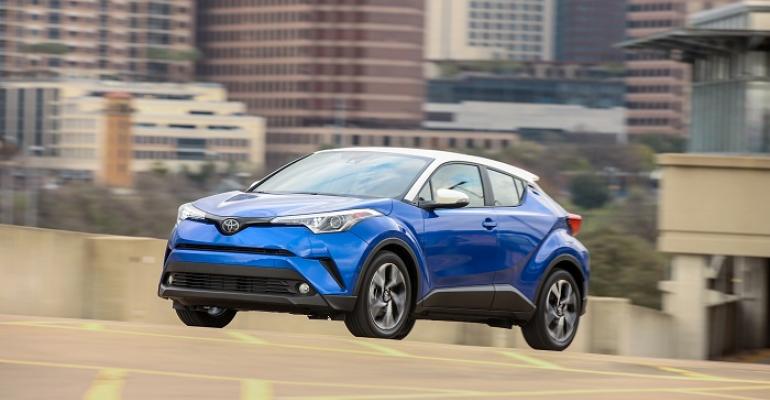 Toyota&rsquo;s first swipe at the small-CUV segment in the U.S. is strong on handling and style, but needs a torquier engine and more interior color and technology.

AUSTIN, TX – To say small CUVs are on fire in the U.S. is an understatement.

Next month Toyota will join the fray with the 18th entrant, the all-new C-HR.

Developed for Europe, the C-HR (meaning “coupe-high rider”) was slated to arrive stateside as a Scion, but was shifted to Toyota last year when Scion was put out to pasture.

That ends up being a good thing. The C-HR has the sort of fun-to-drive character and wild design Toyota wants and needs.

The new front-wheel-drive CUV isn’t a speed demon, given its weak 144-hp 2.0L engine, but it is fling-able on the curvy roads of greater Austin. And yes, it has style in spades, although we wish the interior had more color, as well as advanced creature-comfort technology (advanced safety tech is standard).

With C-HR development starting seven years ago, it is clear Toyota was looking at the Nissan Juke, which debuted in 2010, as a guide. Both CUVs push design boundaries, but unlike the bulbous Juke the Toyota CUV has an edgy appearance with many angles and creases. Large wheel-well flares emphasize its road-hugging, sporty character.

The C-HR may look odd in photos, but up close it all works.

A steeply raked windshield and fastback roofline not only give it style, but also improve aerodynamics.

Toyota pegs coefficient of drag at 0.34. That’s far from Prius territory (0.24) but not bad for a taller vehicle, besting the new Jeep Compass’ 0.35 Cd.

Toyota’s claim the C-HR handles better than anything else in its segment is a bit of a stretch – the Juke, aged as it may be, still carves canyons pretty well, but it is one of the better-handling small CUVs to come along lately. It’s a mostly flat-cornering vehicle, although Austin has some extreme twisties that result in excess body roll if taken too quickly.

Deputy Chief Engineer Hiro Koba says the C-HR was tested at Germany’s Nurburgring to dial in the suspension and steering settings. The Ford Focus and Volkswagen Golf were handling and agility benchmarks, Koba says.

The C-HR has a MacPherson-strut front suspension with angled strut bearings and a double-wishbone rear suspension. Beefy stabilizer bars and Sachs dampers are used front and rear, with the latter employed for the first time in a Toyota-brand model, Koba says. The rear dampers have urethane upper supports, another Toyota first, that when paired with the CUV’s aluminum-cast upper-support housing make for more efficient absorption and a claimed improvement in agility, cabin quietness and passenger comfort.

Agility and comfort, perhaps, but cabin quietness is lacking due to excessive engine and wind noise. It’s likely sound insulation was sacrificed to keep costs down (the C-HR starts at $22,500).

The high-strength/low-weight/low-center-of-gravity Toyota New Global Architecture platform also plays a large role in the C-HR’s driving dynamics. Originally on another Toyota platform when development first began, the CUV shifted to TNGA, used by the new Prius and forthcoming next-gen Camry and destined to underpin all new Toyotas.

The C-HR’s electric power steering, with a rack-and-pinion gearbox on the front suspension, is heavily weighted with higher feedback at higher speeds and lower feedback when puttering around town.

The 2.0L’s relatively weak torque is most apparent on the highway and higher-speed country roads under hard acceleration, such as when passing. But the engine has decent get-up-and-go for darting around the city, which Toyota envisions as the most likely home for C-HR buyers.

If you’re looking for faster acceleration, there is a sport mode, if you can find it. Hint: It’s in the gauge-cluster menu, not accessed via a handy-dandy button. That needs to be remedied, but once it’s engaged sport mode gives the throttle more urgency.

The engine is paired to a CVT with seven virtual gears. It’s one of the most stereotypical CVTs we’ve tested lately, given its delayed response to acceleration. But again, that is most apparent at higher speeds, not in urban driving.

Henry Ford said you can have any color, so long as it’s black. Toyota agrees, at least when it comes to the C-HR’s interior. A single colorway reduces the number of buildable combinations, a money-saving move for an automaker. But the C-HR’s black cabin could use bright, bold colors to break up the darkness. The red of the buckle receptacle is the most hue we can find.

Speaking of darkness, the backseat will be a tough space to occupy for anyone with claustrophobia. It’s short on headroom and light thanks to a high beltline, small windows and the sloped, rounded ceiling at the C-pillars. Maybe the young singles and empty-nesters expected to buy the C-HR won’t transport passengers very often.

Despite the lack of color, the C-HR interior’s diamond design elements are cool, specifically the quilted hard plastic on interior door panels. The CUV’s door sills and ceiling also have diamond-shaped details.

Touchscreen and audio controls leave a lot to be desired. The plug-and-play-looking screen, a holdover from Scion, is a stretch to reach and needs more open space around virtual buttons. It’s easy to accidentally select the wrong thing. The physical audio buttons are tiny and also hard to zero in on with a road-jostled hand.

Infotainment is more “tainment” than “info” due to the lack of navigation and Apple CarPlay or Android Auto. Toyota is a long holdout on the latter two features, while Scion never cared much for navigation.

Something to note: Toyota is complying with NHTSA voluntary requirements to limit touchscreen distraction while driving by eliminating album art and radio-station logos. Generic logos will replace both while the C-HR is in motion.

HVAC controls – yet another area where the diamonds appear – are first-class: easy to reach on the lower center stack and with big buttons or tabs.

While the C-HR does have the Toyota name to count on, one strongly associated with quality and reliability, the lack of some creature-comfort tech and a higher starting price than other sporty CUVs such as the Juke and Mazda CX-3 make the goal of selling 60,000 annually a stretch. But with more engine choices, better interior technology and all-wheel drive (already available in Europe), it could happen.