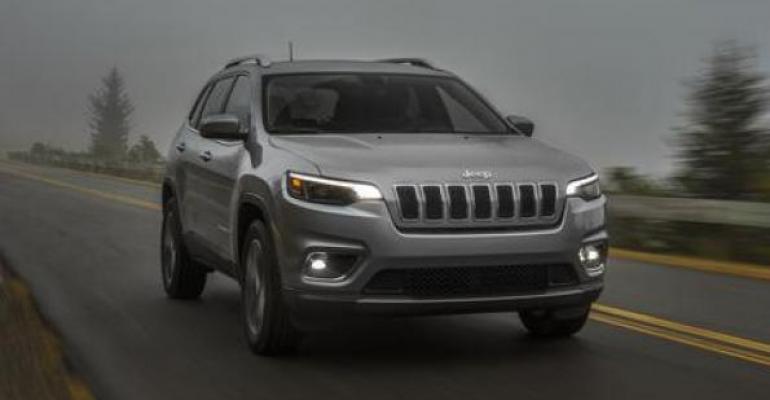 A Tale of Two Jeep Cherokees

FCA refreshes its midsize SUV to stay competitive in a hot segment.

LOS ANGELES – It was the best of roads, it was the worst of roads. This is a tale of two Cherokees, followed by a story of great expectations from Fiat Chrysler Automobiles’ go-anywhere brand. (Sorry, Charles Dickens.)

One of those vehicles is the Jeep Cherokee Limited, the other, a beefed-up variant, the Cherokee Trailhawk. They are among five trim levels ranging from $23,995 to $37,775 (not including a rather hefty $1,195 destination charge).

The refreshed ’19 Cherokee arrives at dealerships this month. Jeep says it’s more than a midcycle facelift but less than a full redo. The added touches aim to enhance Cherokee refinements that give it a look that’s similar to its Grand Cherokee big brother.

The Cherokee once looked like two boxes fused together. Now, with a sleeker design and more accoutrements, it moves closer to the premium segment without completely crossing into it.

We drove the Limited version on coastal and canyon roadways that offer vista views of the Pacific Ocean (a low-tech driver distraction). The roads were steep and twisty, and we drove fairly aggressively but cautiously enough not to unintentionally re-enact a Hollywood movie scene of a vehicle going off a cliff.

The Cherokee Limited took everything we threw at it, showing it’s not just another pretty SUV.

But the Limited is not made for the type of rugged offroading we did at a ranch nestled in the Santa Monica Mountains. (It was the setting for the old M.A.S.H. TV show’s opening scene of helicopters coming in for a landing in what was supposed to be Korea.)

There, we switched into the Trailhawk to do serious offroading that included treacherous conditions including rocks jagging out every which way and steep sandy inclines.

Throughout it all, the vehicle kept its cool, which is more than I did during some white-knuckle moments. At one point, I was just waiting for a jagged rock to gouge into the vehicle’s underbelly. But that didn’t happen, and if it did protective plating would have taken the impact. Moreover, the Trailhawk’s wheels articulate with amazing agility. So, there’s little chance of natural rock meeting fabricated metal.

The Cherokee is the second best-selling Jeep (Grand Cherokee is first) with 169,882 deliveries last year, according to WardsAuto Intelligence. That’s a 14.9% drop compared with 2016, so the refresh was in order.

An enhanced 9-speed automatic transmission is tuned to match the performance of the new 2.0L.

For a Cherokee owner who tows a lot, the V-6 is the engine that makes the most sense. The turbocharged 2.0L can do the job, but with more strain and lower fuel economy.

The former look of the Cherokee “might have been considered polarizing,” designer Brian Nielander says. “That was intentional; we wanted it to stand out. Now, we want to make it more premium.”

The brand spent much design time on the grille, focusing on how it integrated with the new aluminum hood, part of a lightweighting effort that shaved 150 lbs. (65 kg) off the vehicle. Contributing to that cause is a new composite plastic liftgate. The LED headlights are positioned higher, which, among other things, increases forward illumination. Bigger wheels give the vehicle a more-planted stance.

Designers reworked the instrument panel and carved out more room for storage, both in the console box and rear-cargo area that’s 3.3 ins. (85 mm) wider. That was done by recessing some mechanisms. The glovebox is big enough to lose something in there.

The Cherokee was the first SUV with a unibody (rather than body-on-frame) platform dating to 1984. It improved the ride, but it still felt like a truck. That truck-like feel is gone today. No longer are Cherokees and SUVs in general compromised rides.

Cherokee competes in the midsize SUV market. It’s the biggest SUV sector with sales of about 2 million. The Honda CR-V is the segment leader. Other competitors include the Ford Escape and Hyundai Santa Fe.

Although Jeep has repackaged and repositioned the Cherokee, the brand keeps its offroad capability cachet.

The Cherokee is designed for Trail-Rated adventures, with the rear suspension providing up to 7.8 ins. (19.8 cm) of clearance. The front independent suspension with MacPherson struts and a rear independent multi-link suspension absorb plenty of obstacles from rocky surfaces to roads riddled with potholes.

When road conditions are tricky, the drive system detects which wheels are slipping and where traction is needed. Braking and torque are delivered accordingly.

The “brain” of the system constantly adjusts for conditions such as the rugged offroad course the Trailhawk tackled with the agility of a mountain goat. The engine-control module constantly monitored wheel movement from one rock to the next.

Most owners who drop more than $35,000 on a Cherokee will not put them through offroading exercises. But the lure of the Jeep is that you know you can do that.

For the truly adventurous, there are automaker-sanctioned events such as Jeep Jamborees held in various parts of the U.S., such as California and Colorado.

The late Mark Smith, a legendary offroader who ran the Jamborees for many years, told me he once considered a wintertime expedition that would attempt to cross a frozen section of the Bering Strait between Alaska and Russia.

That project never materialized. It ultimately was deemed too risky, Smith said. Worst-case scenario, a Jeep might have ended up atop a broken sheet of ice last seen floating toward Vladivostok.

Tallon tells me about someone proposing an expedition that calls for a Jeep caravan traveling from the bottom of South America to the top of North America. That also was deemed too perilous, mainly because of treacherous stretches of land near the tip of South America.

It’s one thing for driver error to result in a Jeep slipping down a ravine on the Rubicon Trail in California. It’s another thing for a vehicle to disappear into quick sand.