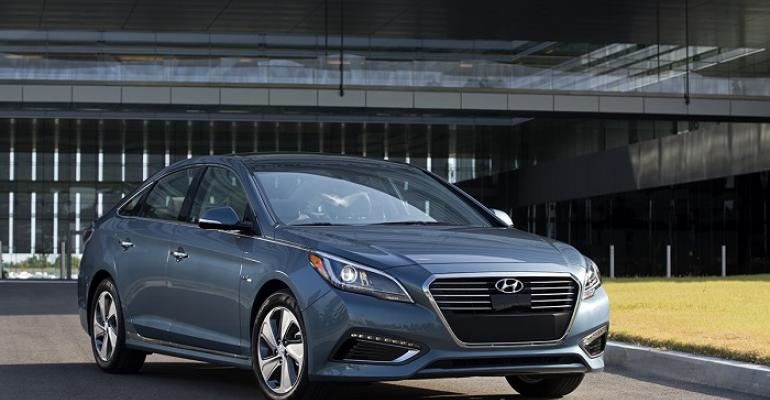 The next generation of Hyundai&rsquo;s midsize hybrid sedan is just on par with the Ford Fusion and Toyota Camry, and underperforms the Honda Accord. The plug-in, thanks to its class-leading range, is a winner.

HUNGTINGTON BEACH, CA – It’s a lousy time to launch a hybrid and a plug-in hybrid.

Gas prices are down, and without a sensible energy policy that discourages Americans from buying thirsty light trucks, sales of most green vehicles will remain down, too.

So why would any automaker launch new hybrids and PHEVs? Because of CAFE and the California Air Resources Board.

California has the most stringent emissions’ rules in the nation. Some other states also follow those rules, mostly in New England. Thus, the redesigned Hyundai Sonata Hybrid and all-new Sonata plug-in hybrid are arriving soon at U.S. dealers to meet CARB emission quotas.

First, the bad news: The second-generation Sonata Hybrid doesn’t raise the fuel-economy or performance bar much beyond the model it replaces and is basically on par with the Toyota Camry and Ford Fusion hybrids.

It underperforms the nearly 3-year-old Honda Accord Hybrid in many key metrics.

The good news is the all-new Sonata PHEV is better, and it’s an intriguing proposition for those who may be tempted to go electric but are too scared to bite the bullet and get a pure EV.

While this is a 10% improvement from the ’15 model, it’s the same fuel economy as the Fusion Hybrid.

Neither top the Accord Hybrid, still best in the segment with a combined fuel economy rating of 47 mpg (5.0 L/100 km), although that’s been an elusive target for WardsAuto and several other media outlets.

Still, there are people shopping these cars who will look at what the Accord Hybrid does on paper and rule out anything with worse stated mileage.

Hyundai’s fuel-efficient driving guide shows most of that leg (59%) is in the normal range, with 23% of our driving economical and just 18% aggressive.

The Sonata Hybrid’s rack-and-pinion, engine-speed-sensing power steering is perfectly weighted and direct, with acceptable play in the wheel.

The ride was well-damped on smooth California surfaces, but final suspension judgment will be reserved until we drive the car on Michigan’s rougher roads.

The Hybrid and PHEV have the same makeup as the conventional Sonata, with more than 50% of the bodies composed of advanced high-strength steels, leading to a 41% increase in torsional rigidity for the ’16 Sonata Hybrid vs. the ’15 model.

An advancement from the current-gen Sonata Hybrid is an 11.3% increase in energy captured for the regenerative braking system.

Both cars’ 6-speed automatic transmissions see the addition of an efficiency-improving high-voltage electric oil pump and a move from natural-air cooling to water cooling.

While the Accord PHEV exceeds the Sonata PHEV on MPGe and hybrid-mode mpg, most people shopping plug-in hybrids are concerned with two things: How far and how fast can I drive on electric power?

Here, the Sonata plug-in, on sale this summer in California and Oregon, shines.

We consume range at a rate of 1:1 before switching from EV to HEV mode to preserve the battery’s remaining 6 miles (10 km) of range for another driver.

We’re proud of our 79% economical/21% normal/0% aggressive score, although it takes some concentration, even in EV mode, to accelerate gently enough away from a stop to keep the engine off.

Hyundai has the smallest motor in the midsize-PHEV-sedan segment and the biggest capacity Li-ion, at 9.8 kWh.

The plug-in hybrid has a 3.3-kW onboard charger, the same as the Fusion Energi, but the Hyundai’s larger-capacity Li-ion recharges at a slightly slower pace, about nine hours vs. the Energi’s seven hours on a 120V outlet and roughly three hours compared with 2.5 hours on a 240V Level II charger.

Like the hybrid, the Sonata PHEV also exhibits good ride and handling characteristics, with a missed turn off course onto twisty, hilly roads resulting in an impressive display of the car’s canyon-carving abilities.

Both the PHEV and hybrid have MacPherson-strut front and independent multilink rear suspensions with high-performance-damper shock absorbers. The PHEV’s front stabilizer bar is slightly thicker than the hybrid’s.

The whole midsize hybrid/PHEV segment is rather meh, so exterior styling, or lack thereof, probably won’t kill a sale.

Hyundai has made a few tweaks to the Sonata’s design, mostly in the name of better aerodynamics for its new green twosome.

All the aero work helps the Sonata Hybrid and PHEV achieve a 0.24 coefficient of drag, Hyundai says, a number that matches the benchmark Tesla Model S.

The hybrid’s SE and Limited grades have a honeycomb-mesh grille, while the Limited hybrid with an Ultimate Package has horizontal chrome bars, the same look as the conventional Sonata and the PHEV.

Interior modifications for the Hybrid and PHEV include unique displays, such as the energy-flow indicator between gauges.

Energy flow also can be viewed on the car’s touchscreen, as can charge settings and nearby charging stations.

Like its exterior, the Sonata’s interior is well laid out and ergonomical, but it lacks visual pizzazz.

Hyundai kicks the Hybrid and PHEV cabins up a notch with Blue Pearl interior, although sadly it’s not standard, available only with the leather seating of the Limited and Limited Ultimate grades.

The dark-blue seats with ivory trim are beautiful and unique, not only within the hybrid/PHEV segments, but in any segment we can think of (the eighth-gen Honda Civic Hybrid had a blue-cloth interior). Most automakers are using reds and tans as options for black/beige/gray.

The Hybrid and PHEV interiors have the same high-quality materials and fit-and-finish as the conventional Sonata, as well as class-leading passenger and cargo space.

The Sonata Hybrid’s cargo space grows from its predecessor as the battery pack moves from behind the rear seat to under the trunk floor, where it sits in the spare-tire well.

There’s really no “base” Sonata Hybrid or PHEV, as all grades have scads of content.

Not surprisingly, with hybrid and PHEV deliveries tanking, Hyundai is being cagey about the sales potential for both vehicles.

While the Sonata Hybrid will be a 50-state vehicle, the PHEV technically will be relegated to the CARB states, although a dealer in non-CARB states will be able to order the car. Sales in Connecticut, Maine, Maryland, Massachusetts, New Jersey, New York, Rhode Island and Vermont begin in the fall.

It is shame the PHEV isn't getting a bigger marketing push because the car does move the needle in the segment.

However, most hybrids and PHEVs are sold in California and, judging by $4-ish gas prices at the time of our visit, the automaker should at least have decent success in the Golden State.