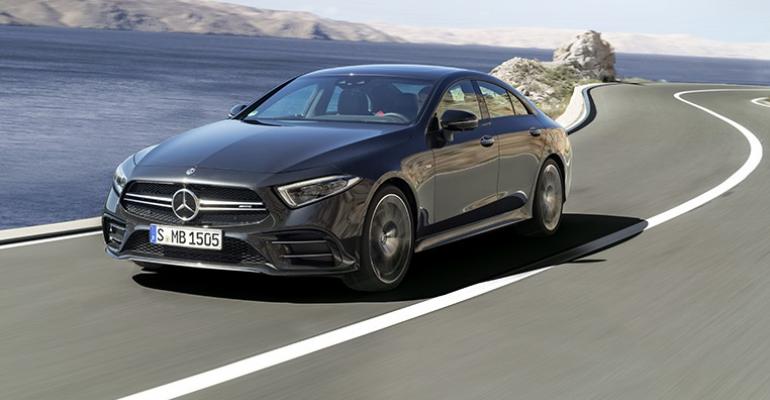 ST. HELENA, CA – Mercedes-Benz is discovering intelligence is a replacement for engine displacement as the German automaker seeks efficiency without sacrificing performance in its high-output AMG powertrains.

Based on the same I-6 introduced late last year in the ’19 CLS450, and now in the ’20 GLE450 SUV, the AMG 53 variant – codenamed M256 – incorporates an AMG-exclusive electric auxiliary compressor, a 48V integrated starter-generator dubbed EQ Boost and a larger turbo. The four E-Class-based models are the first electrified series-production cars for AMG.

The Mercedes and AMG relationship, dating back to the 1980s when the pair teamed up to offer an E-Class dubbed the “Velvet Hammer” for its seductively punchy powertrain, has for years touted “no replacement for displacement” as its guiding principle.

But now the automaker is realizing that if AMG’s performance machines are going to soldier on in a new era of ever-tightening emissions and fuel-economy regulations, intelligent systems will need to supplant displacement going forward.

Call it the “Intelligent Hammer,” if you will. The AMG 53 E Coupe sprints off the line, powered by a full load of torque at just 1,800 rpm, enabled by a smart setup in which the auxiliary compressor spools to 70,000 rpm in a third of a second to produce an instant 8 lbs. psi (.55 bar) of boost pressure. At the same time, the EQ Boost motor chips in 21 hp and 184 lb.-ft. (249 Nm) of torque from a standstill, however Mercedes stresses the EV boost isn’t additive, but rather replaces engine power under certain circumstances. EQ Boost also allows fuel-efficient “gliding” under certain circumstance. 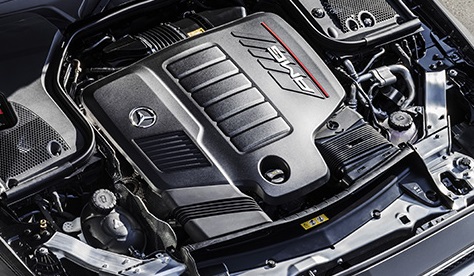 As engine speed increases, the auxiliary compressor hands off as exhaust pressure takes over to spin the turbo, providing boost across the rev range with torque holding steady through 5,800 rpm. The electric supercharger can re-engage if necessary in midrange driving to juice the turbo if exhaust pressure drops off.

Up top, the electronically controlled Camtronic valvetrain gear provides high and low lift on the intake valves for power and efficiency, respectively. The system, first introduced in Mercedes’ 1.6L 4-cyl in 2012, functions much like Honda’s VTECH variable-lift control.

The effect is miraculous, as though a punch on the gas pedal seems to provoke the same level of response regardless of vehicle or engine speed, with just the 9-speed automatic transmission’s brief downshift delays standing between the driver and another sledgehammer burst of acceleration.

At the same time, our observed fuel economy never dipped below 21 mpg (11.2 L/100 km) over a 123-mile (198-km) route and despite a preponderance of heavy-accelerator driving, during which the EQ Boost earned nearly 15 (24 km) “bonus” miles in which added propulsion from the gasoline engine wasn’t needed. Earlier highway drives achieved 27 mpg (8.7 L/100 km).

Despite the premium prices, Mercedes-Benz USA reports the high-performance models are popular: March sales of Mercedes-AMGs totaled 3,435, up 27.4% year-over-year, with 9,684 vehicles sold year-to-date, up 27.1%.

Among the technological advancements offered on the ’19 models is Pre-Safe Sound, a system that emits a crash-like noise prior to an imminent collision. Mercedes says the sound activates a natural reflex in the human ear that helps protect against hearing damage in an accident. 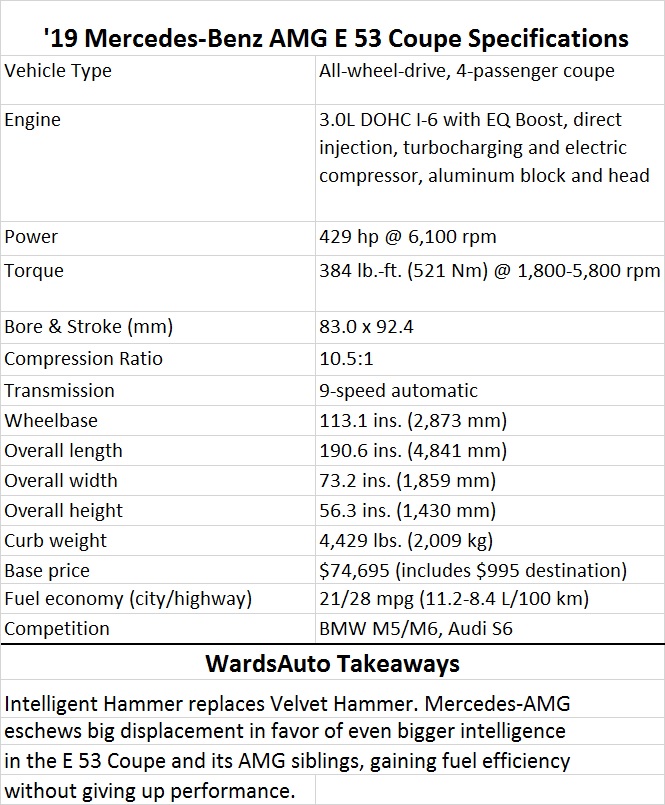