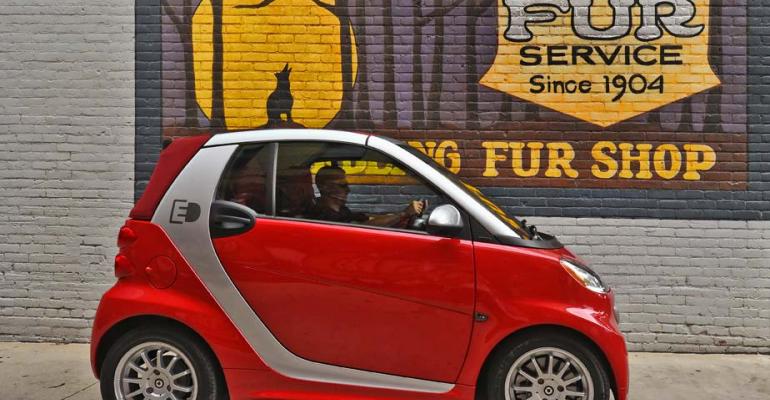 Daimler&rsquo;s minicar, already an also-ran, sparks little inspiration in an EV market that is growing despite a dearth of exciting vehicles.

ANN ARBOR, MI – Daimler quietly enters the mass-market electric-vehicle arena with something of an oddity in the Smart Electric Drive, a plug-in electric version of its Fortwo runabout.

An electrified Fortwo debuted in the U.S. last year but was not sold to customers. Insiders at a media drive here say the response to the possibility that one might come to market pushed forward production of the EV.

Daimler desperately needs the Smart Electric Drive to be a hit. The brand has underperformed since its 2008 arrival in the U.S., and rumors have persisted the plug would be pulled. Nearly every quality survey ranks Smart poorly.

However, sales of gasoline-powered Smart Fortwos are inching upward, having tanked at 5,208 units in 2011.

Along comes the Smart Electric Drive, which will be hard-pressed to reverse the brand’s sagging fortunes. Some say the biggest hurdle to EV acceptance is either purchase price, which can be high even with government incentives, or hesitation toward alternative-propulsion vehicles.

Electric cars also may be slow sellers because they lack style.

For all the talk of millennial buying habits and how the next generation of drivers will “make a statement” with what they drive while carrying the future of the environment in their hands (goodness, that’s a lot of responsibility), there seems to be little effort toward putting some personality into EVs.

It’s understandable that development of such vehicles takes a lot of time and money, but the recently launched EVs really are nothing more than electric versions of existing vehicles. There’s no differentiation, just plenty of homogenization.

Which brings us to the Smart Electric Drive. Everything about this launch seems rushed, probably because the brand is on life support in the U.S.

To be fair, insiders say engineers worked on the electric powertrain for more than six years. But the technology deserves a better vehicle than the current-generation Fortwo. Yes, the EV is available as a convertible, but even that comes with caveats.

Breaking into the EV market is hard enough, but how many people aspire to own an electric version of a car used to transport schwarma?

The Smart Electric Drive wins styling points for its firm seating material similar to what’s in a Sprinter van, which engineers have taken care to make ergonomically comfortable for long-haul trucking. And a unique fabric is stitched around body panels (an option offered at no charge) that sandwich the center stack, glove compartment and instrument panel.

Other interior features, such as levers on the steering wheel for the turn signals and windshield wipers, feel clumsy, disproportionate and cheap. The knob on the gearshift is flimsy, as if it could break at any minute.

Even the touchscreen controls for switching between navigation, audio and other applications is a chore. Prompts are confusing, and clear identification of functions is hard to find on some screens.

The Smart car has never been a dynamic driver, and the EV is no different.

The battery is centered underneath the floorpan, and drivers can feel every bit of it, even along straight roads. In a slight swerve to avoid a bump, for example, the extra mass pulls the car offline more than to our liking.

The weight in this otherwise-tiny car is most noticeable when turning. Steering is stiff and requires extra effort on the part of the driver.

The Smart Electric Drive doesn’t scoot around corners but instead lumbers with the grace of an aging Rottweiler. Snapping back in line takes way too long.

A surprise is how smoothly the car accelerates. Despite the battery weight, it’s easy to push the Electric Drive to optimal speed and keep up with brisk traffic. That said, a Smart EV won’t win any races.

A key component of EV ownership is the ease of measuring range and battery power, something else that proves tricky with the Electric Drive.

The Electric Drive manages to hold that 80% charge for most of our short trip. But when air-conditioning becomes necessary for six miles (10 km), the needle drops to the 60%-range, which is troubling.

As for the convertible option: A control in the cabin lets the top down with ease at any speed. But for a true top-down experience, the driver must stop the vehicle and manually remove roof rails connecting the A- and B-pillars and find a place to store them in this tiny car. Worth the hassle? Depends on the circumstance.

Smart’s saving grace is its leasing option, which no doubt will attract some thrifty consumers. With a $1,999 down payment, a qualified buyer can lease the EV for $139 monthly for three years, so long as driving is limited to 15,000 miles (24,000 km) a year.

The price and no-frills approach to the Electric Drive make it an attractive option for current Smart owners looking to take their eco-consciousness to the next level.

Unfortunately for the rest of us, it’s a lackluster entry into the EV market.