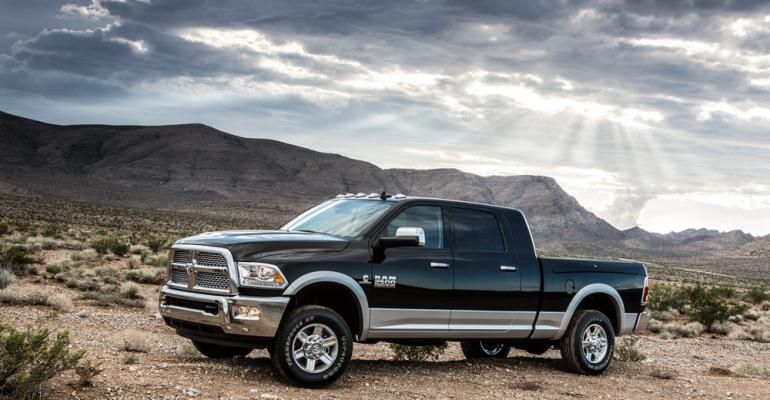 The interiors are softer and the engine is quieter, but Ram 2500 is monstrously capable when it comes to moving heavy loads.

CHELSEA, MI – How fierce is the fight among OEMs to dominate the pickup-truck market? It’s comparable to a pack of hungry wolves fighting over the smallest kill, each hoping to gnaw on the meatiest part of the flesh.

Auto makers regularly tout that even the tiniest gain in share is worth gold as a new crop of customers and a returning generation of pent-up buyers begin to crowd dealerships. Neither may be as loyal to a brand as buyers had been two decades ago.

Chrysler’s Ram division, still relatively new but trading on nostalgic nomenclature, has been on a roll with three years of sales gains, boosted by a refresh of its 1500 pickup last year. That momentum spreads to the 2500, 3500 and other heavy-duty pickups and chassis cabs, which get their own updating for ’13.

Chrysler invites auto writers to test its 2500 and 3500 pickups, available with gasoline and diesel engines, at its proving grounds here and on rural roads in Washtenaw and Jackson counties.

Ram’s new CEO Reid Bigland takes the reins from Fred Diaz, who now is in an executive sales position at Nissan and likely lured over to reinvigorate that auto maker’s Titan pickup. The Titan isn’t a direct competitor to the 2500 and 3500, but the sudden appointment of Diaz, who steered the refresh of the award-winning 1500, only affirms the cutthroat nature of the U.S. pickup business.

Chrysler executives, engineers and designers here take us through a typical heavy-duty trucker’s day with a variety of challenges.

Most of the testing puts us in a Ram 2500 4x4 with an improved inline 6-cyl. 6.7L Cummins diesel mated with a 6-speed 68RFE automatic transmission.

Heavy-duty trucks are just as significant to auto makers as their light-duty counterparts because they bring in higher profits. Just as importantly, buyers who find quality in the vehicle they use in their work life may be more apt to carry over the brand – whether a Chrysler midsize car or another Ram pickup – to their home life.

That in mind, much of the same attention to detail found in the heavy-duty trucks is present in the smaller 1500.

Most of the heavy-duties available for testing come with the Laramie Longhorn package, Chrysler’s top-end truck trim that won a Ward’s 10 Best Interiors trophy this year.

There is no skimping on interior features; the same supple leathers appear as in the 1500, as does burled woodgrain, firm seating, soft touchpoints, a well-organized center stack and Chrysler’s UConnect system, all trimmed in brown to suggest the old American West.

For the test drive, each flatbed is loaded with 10,000 lbs. (4,536 kg) of cargo, whether it’s bales of hay, steel beams or some other heavy item to transport. We’re just a timecard short of being actual truckers.

At idle, the diesel engine chugs, but engineers have tuned it to quiet much of the stuttering. Compared with raucous diesels of the past, it’s a relative hum.

Taking into account the massive load on the flatbed and the payload in the truck, we’re taken aback by how easily the 2500 comes off the throttle. Stomping too hard, a natural instinct, proves to be too much; an average push is all that is needed to get it going.

Like the 8-speed automatic transmission on the 1500 pickup, the revised 6-speed also delivers smoother shifting and improved fuel economy. Shorter ratios make for gear changes that are less noticeable, but downshifting is inevitable on a highway through hilly terrain.

Engineers also switch to a different grade of high-strength steel for this model, intended to keep cargo balanced and drivers in place as they go around corners. Surprisingly, even with the added cargo, it works. We keep our balance through wide turns with little risk of tip-overs or fishtailing.

On top of that, fuel-economy numbers clock in at a respectable 16.1 mpg (14.6 L/100km) during the drive. Budget-conscious fleet managers will approve.

Customers who don’t need so much brute strength can opt instead for the 5.7L gasoline-powered Hemi V-8. For the first time, the 3500 will offer the Hemi powerplant alongside the Cummins diesel.

In the right light, with its chrome accents and glistening paint, the 2500 is easy on the eyes, too. The aggressive front end is Ram through and through and also borrows directly from the 1500. But designers are careful not to make the pickup too large; even on the narrowest of roads we are comfortably within the lane markers.

Back at the proving grounds here, drivers are able to experience other Ram heavy-duties.

A 3500 Laramie Longhorn model with no cargo proves adept at high speeds along Chrysler’s test course, and the smooth-shifting capability seen in smaller models carries over well to this large truck.

A 2500 with the lowest-end Tradesman trim, designed for utilitarian customers, features an upgraded conventional trailer hitch. One drawback with the base trim is higher noise levels.

That said, the goal here is a no-frills utility vehicle and not a yacht on wheels.

Chrysler improves its volume Ram 1500 and equally impressive HD models that differ little in presentation except for hauling and towing capability.

It’s too soon to predict how many buyers will be swayed by these changes, but it’s safe to say the auto maker will be counting every one of them.