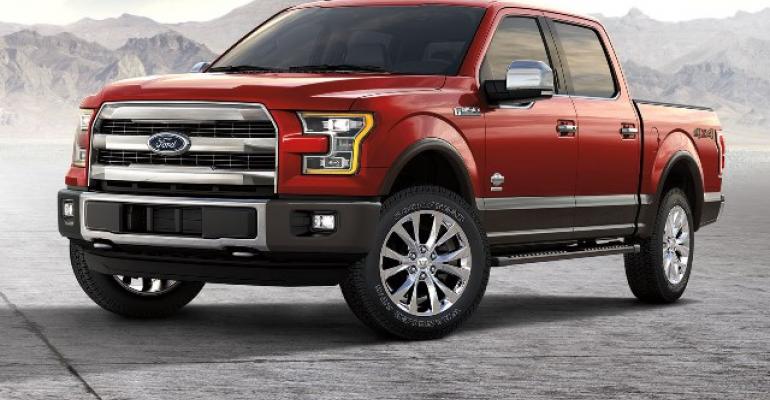 Ford kicks off a 2-year midcycle makeover of its best-selling F-150 light-duty pickup with a heavily revised 3.5L EcoBoost V-6 and an all-new 10-speed automatic transmission. A diesel and a new base V-6 are on tap for the &rsquo;18 model year.

Among the nominees in our 2017 Wards 10 Best Engines field was a hidden gem, the Ford F-150 fullsize pickup and its heavily reworked 3.5L turbocharged V-6 engine and 10-speed automatic transmission.

Updates to the 3.5L EcoBoost engine, codenamed D35, focus on improving efficiency while reducing weight and engine noise. The all-new transmission jumps ratios by four over the carryover 6-speed still offered with all other F-150 engines.

Although the F-150’s powertrain didn’t take home a Wards 10 Best Engines trophy, it did earn kudos for meeting many of the objectives set forth by the engineering team, most notably gaining power and efficiency over the first-generation 6-cyl. EcoBoost.

The biggest change comes in the fuel-delivery system, where Ford engineers added low-pressure port injection to augment high-pressure direct injection already in place on EcoBoost engines. The extra fuel-delivery system allows engineers to shut down the direct-injection system and its mechanical pump at low speeds and under low loads, reducing friction losses and emissions. Employing both systems at start-up cuts cold-start emissions as well, Ford says.

The compression ratio now is 10.5:1, up from 10.0:1, although the lower ratio continues for the high-output version of the engine in the F-150 Raptor.

Credit the 10-speed gearbox with the efficiency gained. Designed, engineered and produced by Ford in a joint program with General Motors, the all-aluminum transmission features three overdrive ratios and one direct-drive ratio to help improve highway fuel efficiency. The unit also has a built-in electric fluid pump that maintains pressure to ensure quick transmission response in stop/start driving.

Ford’s focus on powertrain updates for the light-duty pickup and launching its all-new ’17 Super Duty heavy-duty lineup means the F-150 sees little additional change for the model year. Focusing on the powertrain during our Wards 10 Best Engines evaluations revealed strong points and shortcomings with the new engine and transmission combo.

That’s good news for those who occasionally tow or carry loads because, while the EcoBoost engines provide good low-load efficiency, the turbocharged engines have been criticized for poor fuel economy when taxed. Ford recommends the 5.0L V-8 as the best choice for those who regularly tow or haul, but if our brief experience is any guide, those once-in-a-while haulers will be well-served by the turbo engine.

We found the powertrain surprisingly smooth for a truck, including the barely detectable operation of its stop/start technology, which only restarts once the brake pedal is released, unlike some stop/start systems that re-engage when turning the steering wheel.

Thanks again to the 10-speed transmission, the engine motors along at just 1,100 rpm at 50 mph (80 km/h) and only 1,550 rpm at 70 mph (113 km/h), less than 900 rpm above idle. Under most low-load driving, the gearbox seems to spend the majority of its time in eighth gear or above, with a detectable low-level thrum accompanied by steering-wheel and pedal vibration in ninth and 10th gears.

That said, the F-150 suffers no lag from a stop, pulling crisply from a standstill and roaring to speed with authority, especially for a 4,890-lb. (2,218-kg) truck.