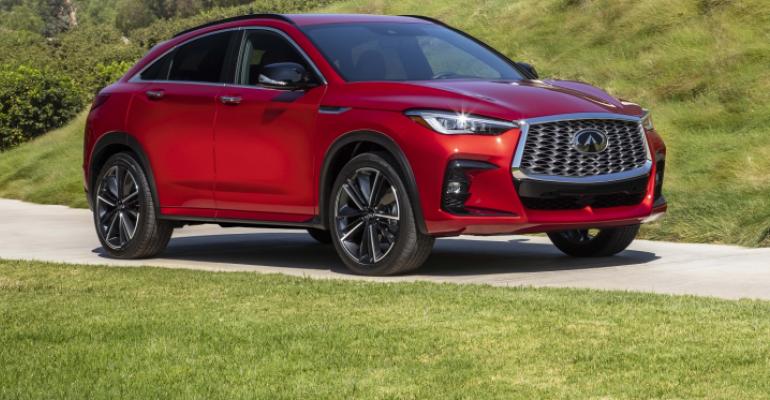 New QX55 on sale in April in U.S.
Vehicles>Test Drives

The new fastback is more stylish than the Infiniti QX50 from which it’s derived, but just as fun to experience, although the driver-assistance technologies don’t always work as intended.

The current-generation Infiniti QX50 CUV is a stylish, powerful midsize luxury crossover that quickly won a slew of industry accolades, from Wards included. We gave it a 2018 Wards 10 Best Interiors award, largely for deft use of color and shapes, and its powerful-yet-smooth VC-Turbo engine won Wards 10 Best Engines trophies in both 2019 and 2020.

It’s no surprise then that Infiniti has decided to build upon the success of the current QX50 by introducing a derivative model, the QX55.

The Nissan-owned luxury brand is calling the model a “crossover coupe.” A spiritual successor to the original Infiniti FX (a stylistic rebel when it was introduced in 2003), the new QX55 occupies the same niche segment as current fastback luxury CUVs the BMW X4 and Mercedes GLC coupe.

As the QX55 rides on the same platform as the well-liked QX50 and shares an engine, interior and suspension system with that vehicle, our impressions during test drives in early March around metro Detroit are favorable, as they were for myself and the Wards staff with the QX50 throughout 2018.

The interior largely is copied from that model, but without a quilted interior option. Other elements carry over, including a 2-tone wave of color, swooping down from the side of the center stack onto the center console.

This trim in our $57,050 Sensory all-wheel-drive grade (AWD is standard across the board) is an eye-catching red and black, a bolder combination than the soothing ivory and navy in the QX50 we tested in 2018.

As in that model, the QX55 has soft surfaces galore, including on the console box lid and the entire upper instrument panel. That’s covered in soft black leather (or pleather – it’s so convincing we can’t tell the difference) with white stitching. The front of the IP and upper doors also are trimmed in soft, leather-like material (pictured below).

Red and black seats are full semi-aniline leather per Sensory grade specifications. Open-pore, textured wood trim decorates doors. The wood is stained a trendy dark gray, matching well with the red and black. In keeping with the tip-top materials, the headliner and pillars are covered in a circular knit fabric. 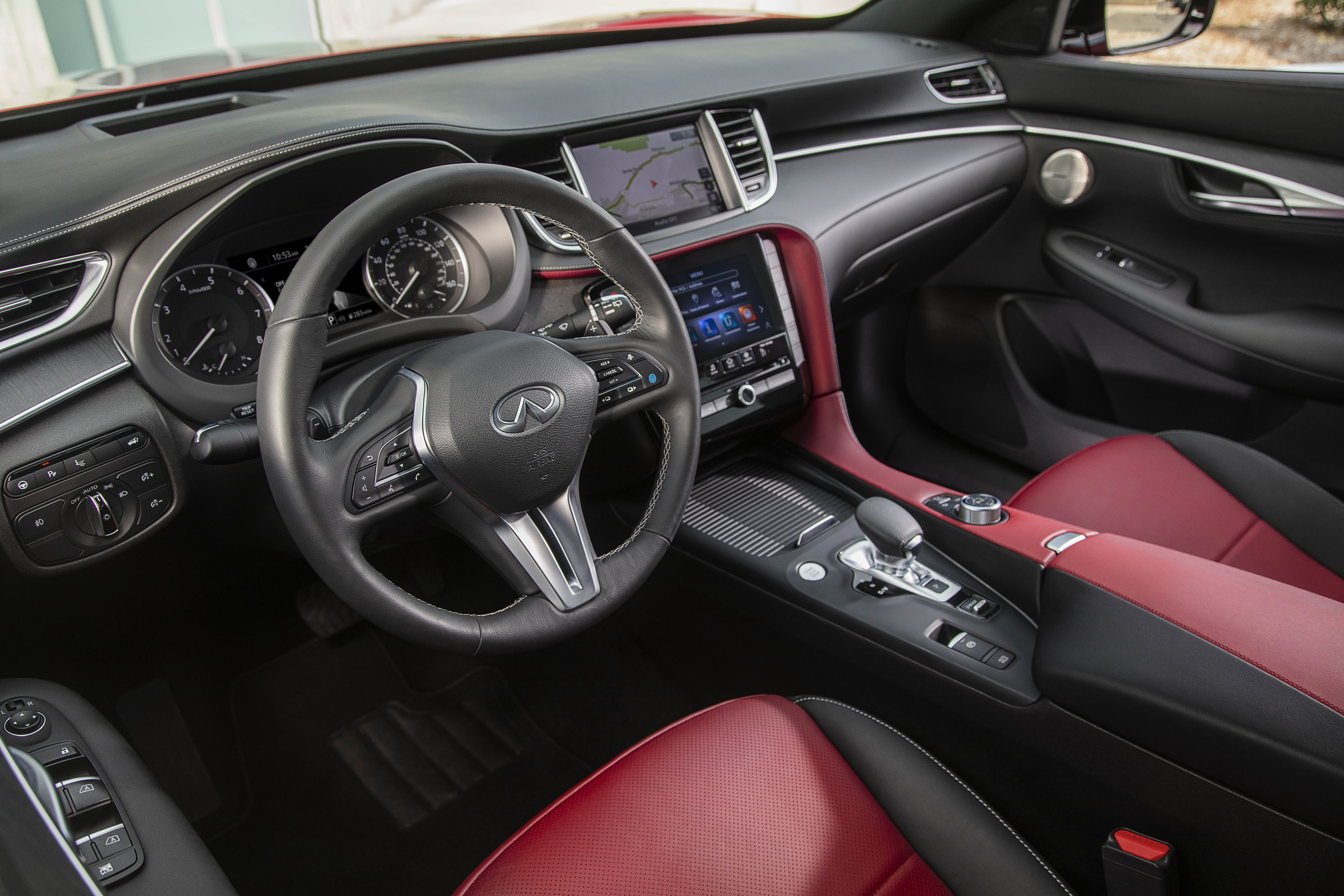 While the interior of the QX55 hews closely to the QX50, the exterior is adapted for the sportback profile.  Infiniti’s signature double-arch grille shape remains, with mesh undulations inspired by origami.

At the rear, 45 LEDs housed in one unit allow for a piano-key-style light sequence. For a cleaner look, Infiniti hides the liftgate release button in the triangle of the Infiniti logo on the tailgate.

The QX55 is chock full of technology, as is to be expected with any luxury vehicle.

Under the hood lives Infiniti’s VC-Turbo: a 2.0L 268-hp 4-cyl., making 280 lb.-ft. (380 Nm) of torque. The variable-compression turbocharged engine instantly can vary stroke length, up to 6 mm, and change compression ratio from 8:1 to 14:1, providing power when you want it, as well as improved fuel efficiency.

We do love the power over our 70-mile (113-km) route, allowing us to pass slower moving traffic with ease. A slightly sore neck, but smiles result from testing Sport mode, which quickens acceleration. We average 24.6 mpg (9.6 L/100 km) during the journey, about the same figure we earned when we tested an AWD QX50 in Los Angeles in 2018.

Safety technology is plentiful, but it doesn’t always work, or work well for that matter.

As in the QX50, we have several issues with ProPilot Assist in the QX55. ProPilot is Infiniti’s semi-autonomous technology, pairing adaptive cruise control with adaptive steering (both must be separately activated, however) for stop-and-go driving and relaxed (but not hands-off) steering.

We find the system to be just as temperamental as we did in 2018, despite updated sensors and cameras. 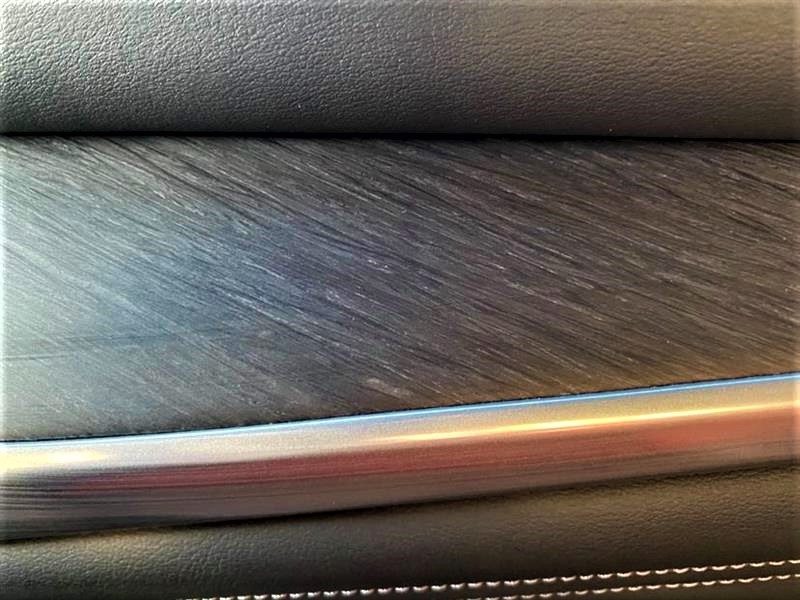 Lane detection, or lack thereof, is an issue for our QX55 tester. Even thick painted white lines sometimes go undetected.

As for steering, we are consistently pulled left, not centered. Riding with tires on left lane lines puts us too close for comfort to nearby traffic, so we intervene and nudge the steering wheel right.

At least the ACC works well, bringing us to a stop several times and sometimes resuming by itself (stops have to be shorter than three seconds for that to occur).

There were some glorious moments when ProPilot worked perfectly, detecting lane lines and steering us, for instance, on a giant curve approaching I-75, but they were few and far between.

A bright, sunny day, as we have during our testing, can present problems for sensors and cameras. So can gray cloudy days. And rainy days. And snowy days. Pretty much every weather condition can foil consistent and/or accurate detection of lane lines.

Infotainment technology is a mixed bag, but not nearly as objectionable.

The QX55 has the familiar Infiniti two-screen center stack design (pictured below), which we are schooled in and are comfortable using, although others may find it maddening. The upper screen essentially is map view, but also is touchable.

There still is a lot of physical switchgear, including a large knob that zooms the map in and out. Buttons along the left and right of the lower screen make for easy access to a variety of features, and some also are duplicated within the lower screen, such as some climate functions.

Voice recognition is improved from our last experience in an Infiniti. You can skip saying category names (i.e. audio or navigation) and just say after hitting the push-to-talk button: “Navigate to.” Our commands are understood, with results returned quickly. However, results aren’t always what we are after. Despite being within a mile of a Meijer, the results list showed Meijer stores much farther away. Weird.

An exciting feature of the new QX55 is its wireless Apple CarPlay. The Infiniti end of it worked flawlessly, with quick phone pairing and the CarPlay menu showing immediately on the upper screen. But Verizon’s network was taxed the day of our test so some of our commands to Siri to play a song weren’t fulfilled. (FYI: A long hold on the vehicle’s push-to-talk button brings her to life). 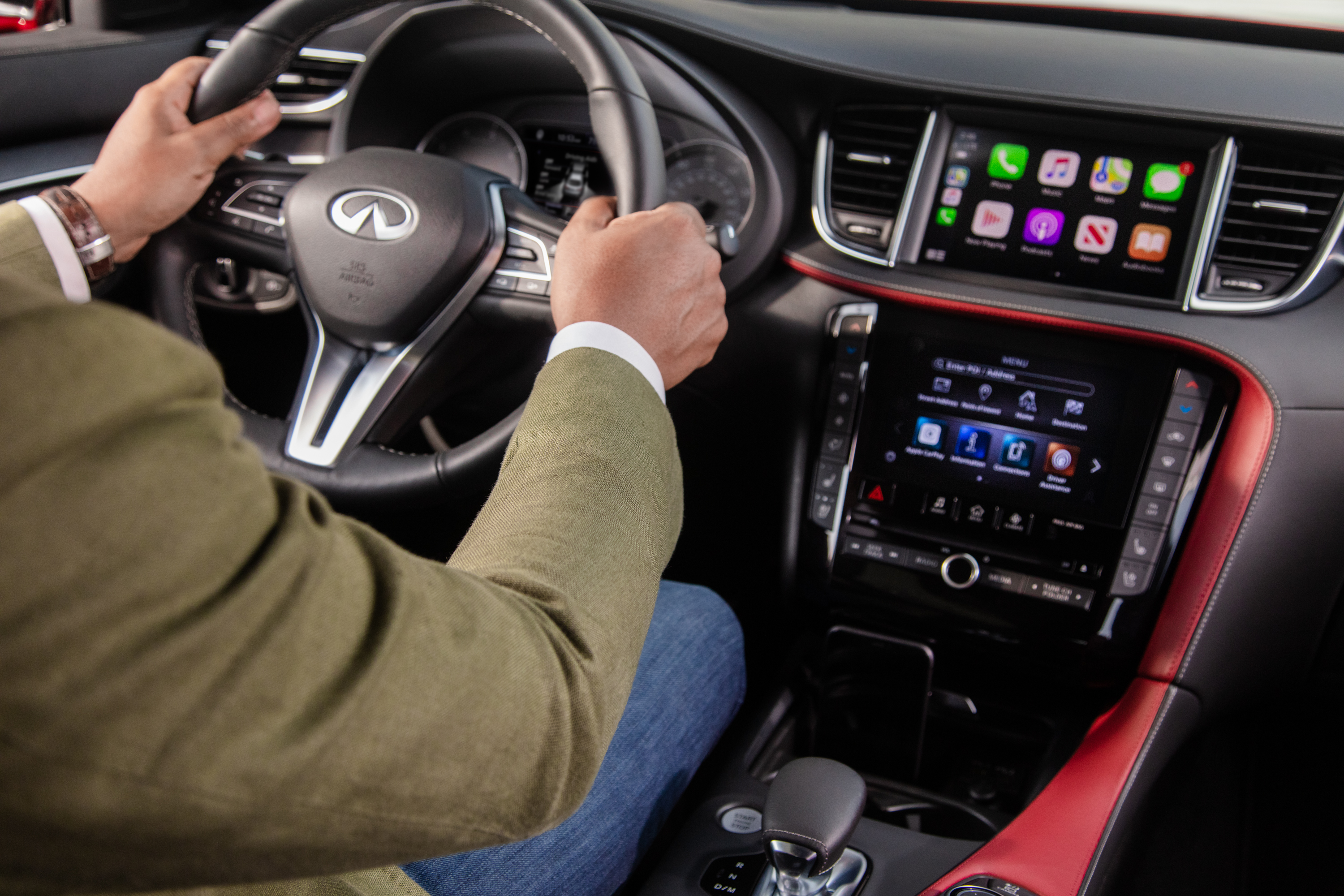 For interior comfort, we prefer the flatter back seats vs. the front buckets, which, try as we might, never contort to our liking.

Legroom is good in both front and rear. Headroom isn’t as compromised as you might expect in the rear despite the fastback roofline.

There are three USB ports in front and one in the rear, as well as Wi-Fi with up to seven device connections possible.

Overall, we like the QX55 and find it a more stylish alternative to the QX50 with a lot of the same functionality. The engine and interior design remain impeccable, but some of the safety and infotainment tech is disappointing.

Hopefully better cameras and sensors are just around the corner, as it’s hard to imagine the average consumer putting up with poorly functioning ADAS that costs thousands. This isn’t just an Infiniti problem, but an industry-wide one that needs to be solved to instill confidence in partial or full self-driving capability. 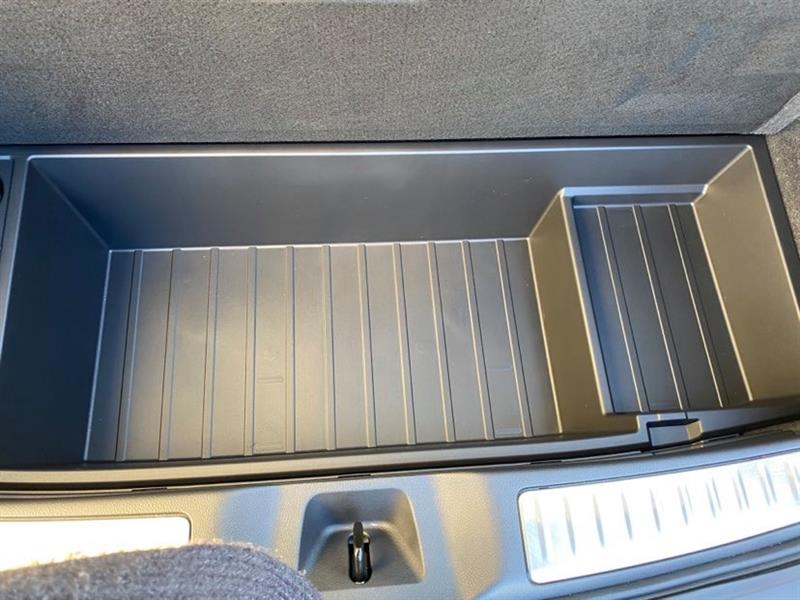 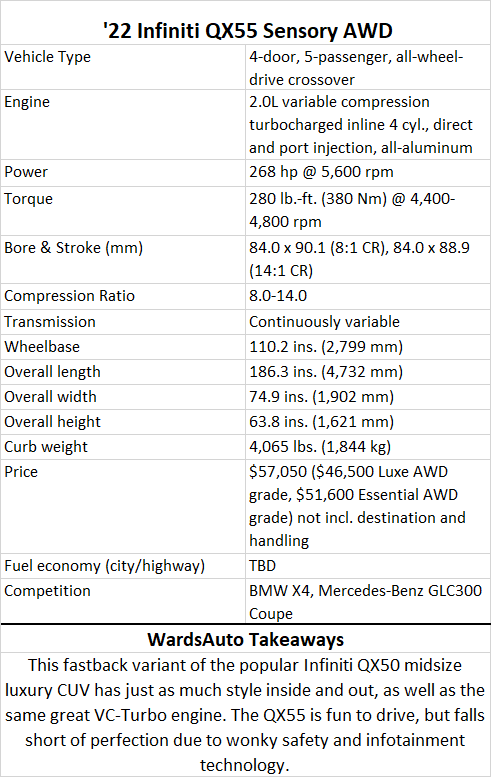