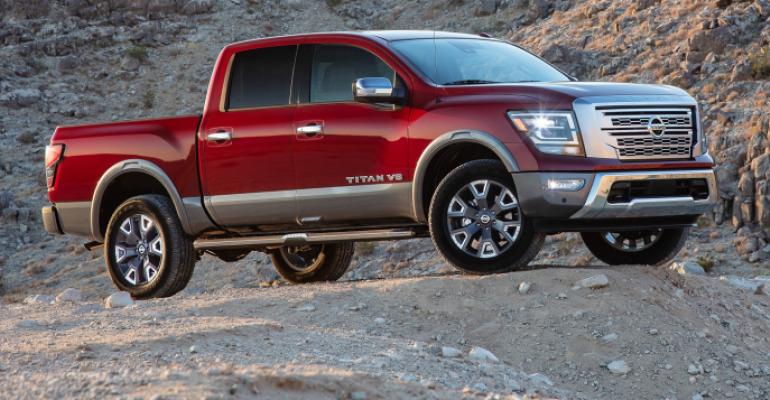 For the ’20 model year, the Titan gets a refresh costing $230 million. It corrects some issues the outgoing ’19 model had and puts it on more even ground with the competitive set, but deficiencies remain.

PARK CITY, UT – You have to hand it to Nissan. For 16 years they’ve been plugging away at the fullsize pickup segment in the U.S., frankly without much success.

The Titan remains well behind the Detroit Three’s offerings. Wards Intelligence data shows the Titan’s share was 1.4% through October vs. 35.2% for the No.1 Ford F-150 and its best segment share (3.5%) occurred 14 years ago.

But Nissan perseveres in the hopes of getting the large truck a footing in the marketplace.

For the ’20 model year, the Titan gets a refresh costing $230 million, Nissan says here at the truck’s media drive last week. It corrects some of the outgoing ’19 model’s deficiencies and puts it on more even ground with its competitors, but issues remain.

We noted the lack of active safety technologies such as lane departure warning in our 2016 test of the half-ton crew cab Titan, so it’s nice to see Nissan correcting that with the ’20 model by adding its Safety Shield 360 suite of advanced driver assist technologies as standard.

While Nissan said three years ago LDW was difficult to use on a pickup because their width almost guaranteed you’d always be near a lane line, the system was not overly active or intrusive during a drive of a ’20 Platinum Reserve 4x4 crew cab here.

AVM proves helpful in the Platinum Reserve Titan, allowing us to maneuver the truck through parking lots and in and out of parking spots designed for compact and midsize vehicles. It should be standard on this pickup and every pickup sold in the U.S.

Nissan offers a rearview monitor with trailer guidelines on the Titan for easier towing. A trailer already was connected to one SV king cab grade of the truck in a towing test here, so we can’t say for certain how tricky (or not) a hookup can be, but likely it’s not as easy as in the Chevy Silverado and GMC Sierra with their trailer see-thru views.

Underwhelming displays also had been a drawback of the Titan vs. its competition. So after upgrading the standard screen size in ’18, Nissan goes bigger still with an optional 9-in. (23-cm) touchscreen for ’20 (pictured below). The automaker touts the screen’s WXGA resolution as higher than that of a HD screen. The standard screen grows to 8 ins. (20 cm), making it the largest standard screen in the class, Nissan says. 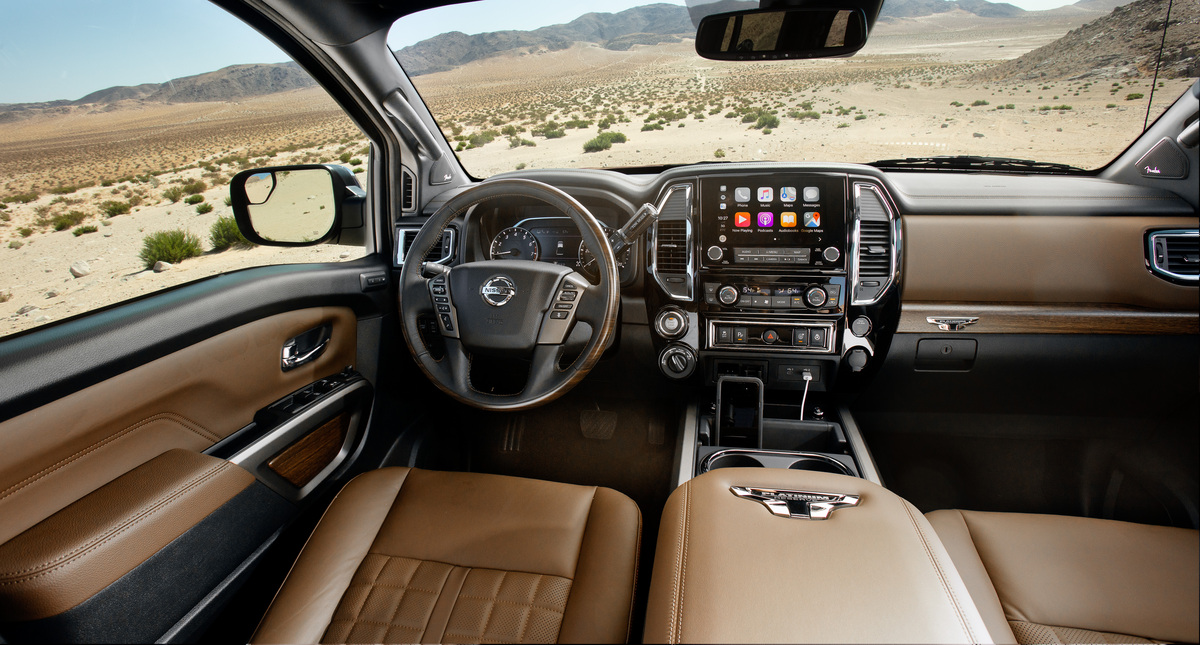 The screen resolution is indeed an improvement, although fonts and graphics are carryover.

The infotainment system acts up a bit. In a few instances hitting icons for SiriusXM preset stations we experience weird lag time, or no response at all, necessitating use of the hard seek buttons on the center console.

Nissan has seriously improved its voice recognition system. Two tests, both asking for SiriusXM stations by name – a feat you couldn’t do just a few short years ago – give fast and accurate results.

The Titan ups its connectivity game, adding an internal Wi-Fi router able to connect as many as seven devices at speeds up to 45 Mbps; Apple CarPlay and Android Auto are standard. There’s also a slew of ports and plugs, including new USB-C outlets for faster charging of devices.

As with Nissan’s Rogue, over-the-air software updates are possible via the NissanConnect telematics service. Updates able to be done over the air include items for safety and security, software and firmware, says a company official.

Design changes to the interior include newly positioned grips, bigger door storage cubbies and a new smartphone holder/charging system. The latter works OK, once you get your phone in.

The tabs are tight, and trying to position our phone results in us pulling the whole contraption out of the center console (don’t worry – it’s meant to be removable).

Disappointing was the lack of expected finery in the cabin of our Platinum Reserve tester. While it has a padded and stitched upper IP and leather seating, the wood trim in our test vehicle appears simulated (per the spec sheet it’s real) and upper doors have hard plastic trim instead of soft-touch material. Nissan hasn’t announced pricing yet for the ’20 Titan, but the ’19 Platinum Reserve stickered around $60,000.

On the fit-and-finish front, we also find some sharp edges on the bin on the side of the center console and at various spots on the passenger-door bin.

Showing that $230 million doesn’t go as far as you’d expect is the lack of powertrain options for the Titan.

Nissan has discontinued the Cummins diesel in the ¾-ton Titan XD, and a long-discussed V-6 option will not happen for this generation, per a Nissan engineer. So the only mill for the half-ton remains the 5.6L V-8.

It’s a serviceable engine with lots of breadth across its power band, from takeoff to midrange to full throttle. It exhibits no strain or lack of power here towing a trailer with two 4-wheelers up some inclines, impressive given the high elevations around Park City.

A new Jatco 9-speed automatic replaces a 7-speed auto and exhibits smooth, purposeful gear changes, not the hunting that occurred with some of the early multi-gear ATs.

Powertrain noise intrusion into the cabin is minimal, thanks to NVH mitigation measures such as laminated glass and exhaust tuning that stifles whining. 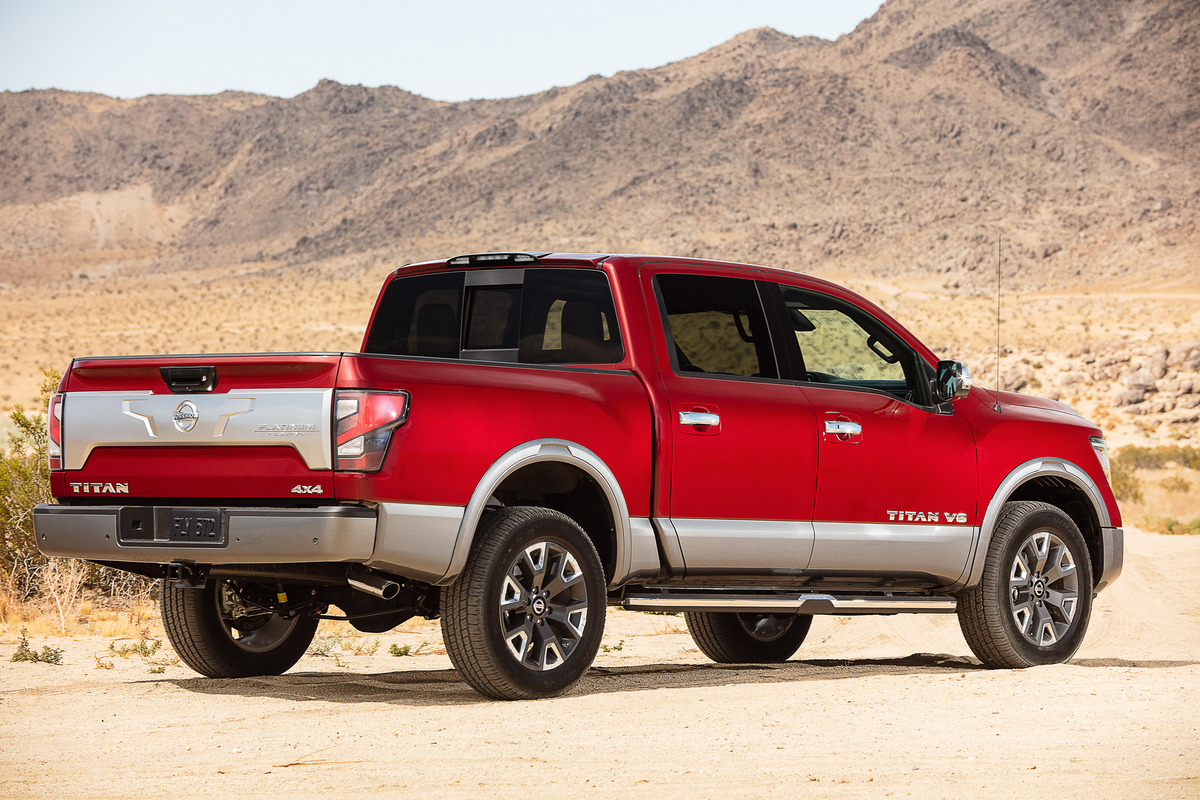 The new 9-speed also helps enlarge the crawl ratio in PRO-4X grades set to 4-wheel-drive low, as first gear goes from 4.8 to 5.9 and the rear differential grows from 3.6 to 3.9. In a test here of the new ’20 off-roader we tackle steep rocky hills with ease and little wheel spin.

In a fullsize pickup segment with claims full of asterisks, Nissan says it now has the highest-horsepower standard gasoline V-8. But again, this is running premium fuel. Refueling a pickup already is a pricey endeavor with regular unleaded, so we wonder how many buyers will even bother to use premium to get that 400-hp figure.

But those are just base V-8s. All the trucks save for the Tundra have additional V-8s, plus V-6s and diesels, while GM also has a 4-cyl. Given all the options available from the competition, Nissan needs more engine choices for buyers, especially something providing better-than-expected mpgs.

The refreshed ’20 Titan goes on sale early next year in the U.S. The pickup continues to be assembled at Nissan’s Canton, MS, plant. 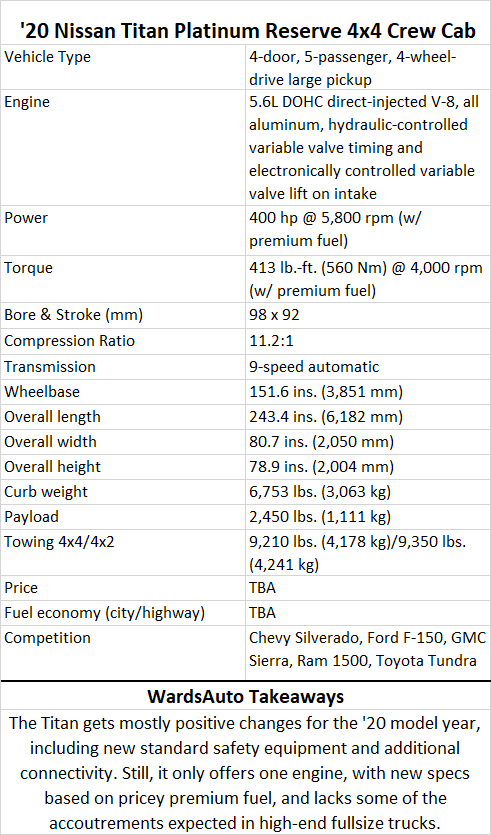