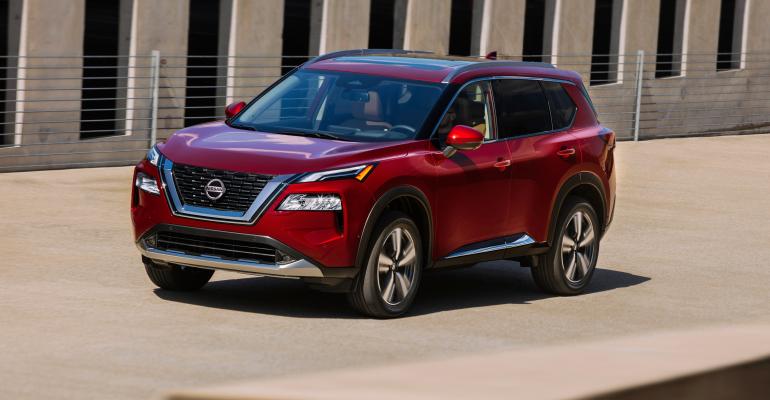 The latest generation of Nissan’s compact CUV matches the competition in features and performance, with in-vehicle technology getting a much-needed upgrade.

DEXTER, MI – Thirteen years ago Nissan debuted its first compact CUV, the Rogue, wisely gauging that segment was going to get much bigger.

But the Rogue has some hefty competition in the form of Toyota’s RAV4 and Honda’s CR-V. Its two top Japanese rivals regularly outsell it – a situation Nissan hopes to rectify with the redesigned 2021 CUV on sale now.

Bringing much of the same refinement seen in its competitors and the excellent new Nissan Sentra compact car, a Wards 10 Best Interiors winner for 2020, we think the Rogue has a good chance of luring RAV4 and CR-V intenders.

We test drive a new ’21 Rogue Platinum front-wheel-drive grade (pictured below) in and around this bucolic small town adjacent to Ann Arbor. Our route consists of city streets, two-lane country roads, state highways and one interstate.

The ’21 Rogue rides on an updated version of Nissan’s Common Module Family platform for compact and midsize vehicles. The Sentra is on the same platform and future models from Nissan’s alliance partners Renault and Mitsubishi also will use it.

The heavier Rogue doesn’t have the same engine as the lighter Sentra though, with Nissan employing the Altima midsize sedan’s 2.5L direct-injected gasoline 4-cyl.

We liked the naturally aspirated 2.5L when we drove the Altima two years ago, for its speed off the line and extreme refinement. It was 95% updated at the time from an older design, with the direct injection added, as well as an integrated exhaust manifold and cooled exhaust-gas recirculation.

The 2.5L is mated to a Nissan-standard CVT with simulated gears. Differences between the Rogue’s drive modes (standard, eco and sport) are most apparent when engaging our Platinum’s paddle shifters to downshift to a faux low gear.

A stereotypical rubber-band feeling, when acceleration trails throttle input, is occasionally experienced with the CVT but is not a major gripe. Nissan has switched to an electronic shifter to free up center-console space, albeit one that looks and functions like a traditional lever.

A switch from a trailing-arm rear suspension to a multilink design allows for more rear passenger space in the vehicle, including headroom. Legroom is generous too, big enough for this 5-ft.-8-in. reviewer without needing to reposition front seats.

The styling of the ’21 Rogue was spawned by the 2018 Nissan CrossMotion concept. While competing models’ exterior designs seem to fall into one of two categories – soft or angular – the Rogue nicely blends softness with angularity.

But the CUV’s interior is the real draw.

The Rogue Platinum lives up to its luxurious badging. It has the same diamond-within-diamond quilt pattern seen on the Sentra’s seats. At $35,000-ish to start, you’ll find striated and etched trim on the center console, as well as handsome faux-wood film on the instrument panel.

Besides quilted seating (pictured below), the other big wow factor inside the Rogue Platinum is its standard digital gauge cluster.

Nissan displays have lacked size and clarity, but those issues are gone in the Rogue Platinum. Its 12.3-in. (31-cm) digital cluster and 9-in. (23-cm) touchscreen, plus a head-up display, are stellar. All are big and bright, with bold and clear lettering and icons. Easy-to-read screens make solo navigation a snap. 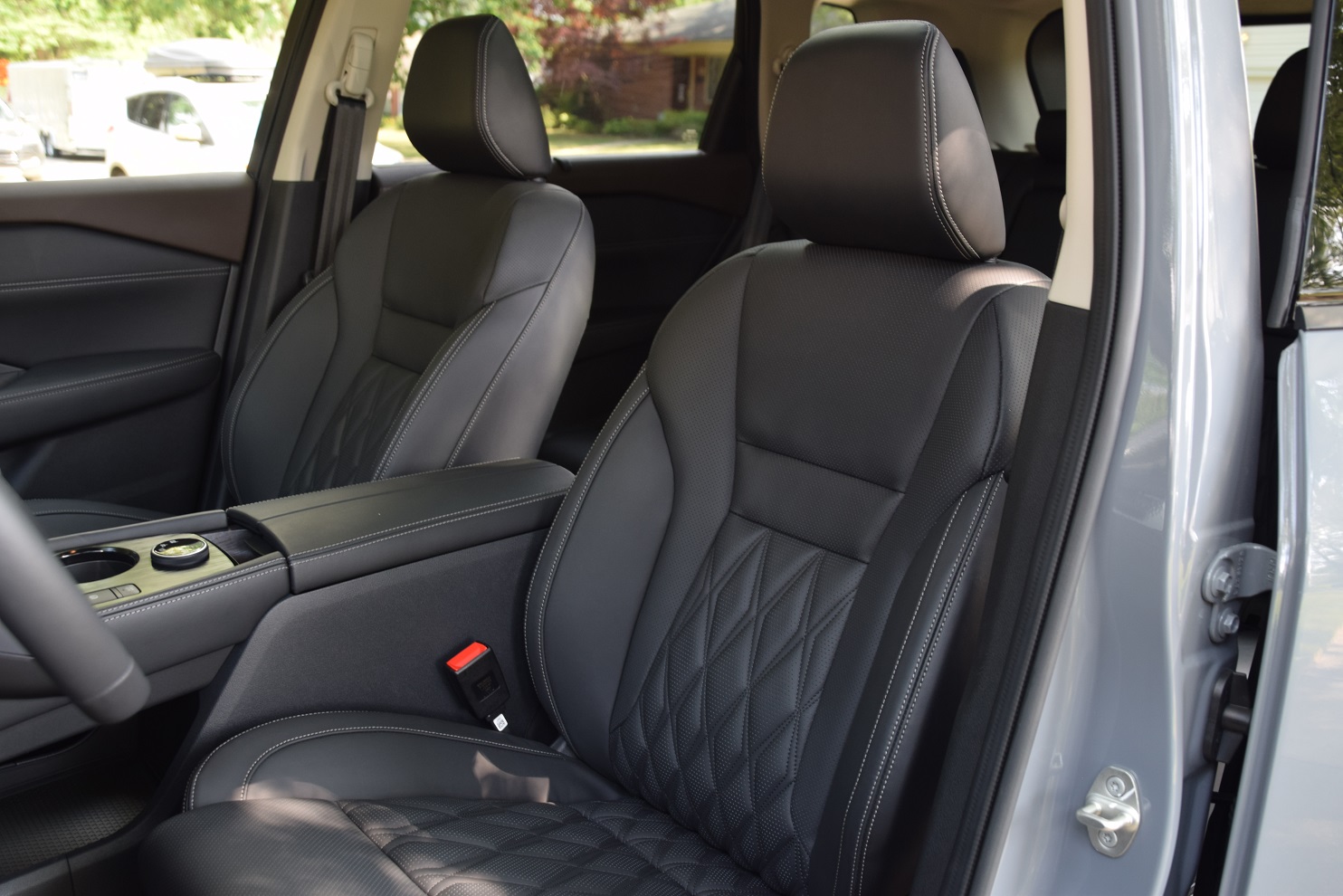 Volume and tune knobs adjacent to the screen are topped with glossy black trim, and frankly are not great ergonomically as their shallow depth makes them difficult to grip.

We briefly inspect a mid-grade Rogue SV and spot a few differences from the luxe Platinum: Seats are cloth (albeit cool-looking), the touchscreen is smaller while knobs are deeper, a copper metallic film replaces a faux wood film on the mid IP, the rear seats are not heated.

But it still has many of the same materials (soft-touch upper front doors, cupholders with retractable nubs and a removable textured bottom) and is an attractive package.

The SV and Platinum have a 12V outlet, Qi wireless phone charger and two USB ports (one USB-C) at the base of the center stack, as well as two rear USB ports.

Activating the new wireless Apple CarPlay is a breeze. Checking out the in-vehicle entertainment, using voice recognition to change stations, is simple and fast.

Nissan’s voice recognition remains somewhat structured – we need to say “Audio” before a radio station command, for instance. Although later we flout the rules of how to structure a navigation command and the system still pulls up our intended destination.

Like many new Nissans, the Rogue has standard Safety Shield 360, a suite of advanced driver-assist systems including automatic emergency braking with pedestrian detection, blindspot and lane-departure warning and rear automatic braking. Ten airbags are standard.

Available on our Rogue Platinum is Nissan’s ProPilot Assist, which combines adaptive cruise control with assisted steering. It is a semi-autonomous way to drive but not perfect, like many similar systems.

It operates better than prior experiences with ProPilot Assist in other Nissan and Infiniti models. Nissan says next-generation radar and camera technology debuts this year, giving “smoother braking, better steering-wheel assist feel and improved detection performance when other vehicles cut in the lane.”

We have first-hand experience with the latter point, when a beat-up Honda Civic cuts in front of our Rogue on U.S.-23. It’s close, but we delay hitting the brake, waiting for the vehicle to react. It does. Crisis averted.

But shortly thereafter in a similar scenario, when our Rogue detects a Lincoln ahead (as indicated via a HUD icon), it doesn’t slow so we have to manually brake. As we note with any ADAS system in any vehicle, it is important for a driver to remain aware and ready to resume control.

A limitation in the Rogue’s success is its name recognition lags the CR-V and RAV4, which have been in market since the 1990s and rack up roughly 300,000 and 400,000 annual sales, respectively in the U.S.

As the Rogue matches (and sometimes exceeds) the CR-V and RAV4 in features, Nissan’s antidote needs to be heavy marketing to woo compact CUV intenders. 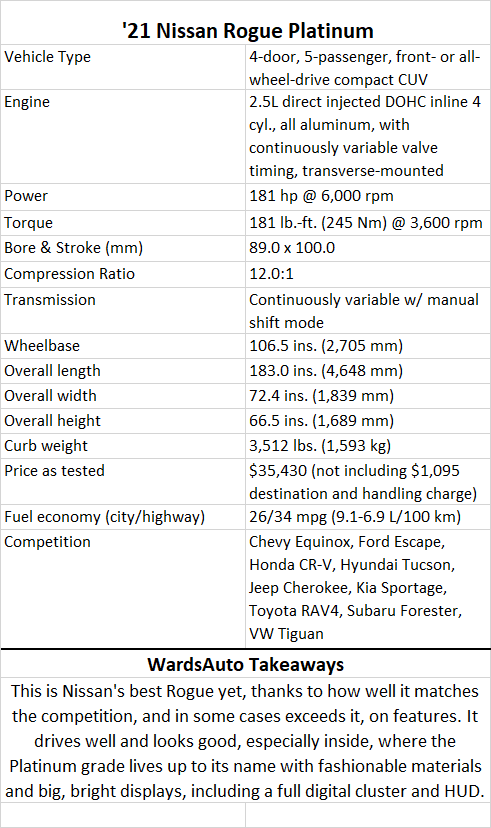