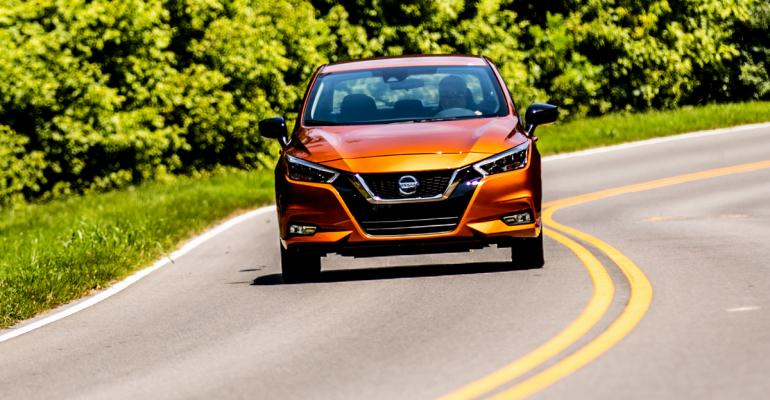 Lots of standard tech for under $20,000, plus some snazzy interior elements and good fuel economy, makes the redesigned ’20 Versa subcompact a great deal.

NASHVILLE, TN – With the average price of a new vehicle in the U.S. somewhere in the mid-$30,000 range, it’s easy to forget there still are people wanting, and buying, basic, affordable transportation like subcompact cars.

The good news is there’s nothing really basic about the Versa, on sale at U.S. Nissan dealers.

Redesigned for ’20 and now available only in a sedan body style (the prior-gen hatchback was outsold by the sedan and Nissan now has the Kicks small CUV to fill the 5-door slot), the car has many of the same creature comforts we’ve come to expect in bigger, higher-priced models.

You want USB ports to charge your phone? The Versa has three of them. Siri and Google voice assistants? The Versa has both standard. Power windows and doors, automatic emergency braking with pedestrian detection and rear automatic braking are all here, too.

The entry-level Nissan also has as standard a 7-in. (18-cm) touchscreen and lane departure warning, both features rarely seen in this segment without stepping up to a higher trim level or opting for an option package.

Prior generations of the Versa sedan were…how shall we say it…ugly. Stubby and ill-proportioned, their appearance screamed: “My owner is too poor/frugal to deserve better style.”

The new Versa is the most visually appealing generation of the car yet, because like most redesigned cars of today, it’s longer, lower and wider than before, adding sleekness.

Unlike the outgoing generation, the new Versa visually belongs in the same showroom with Nissan’s other sedans, the Altima and the Maxima, wearing their same V-motion grille, floating roofs and wraparound headlamps and taillamps. 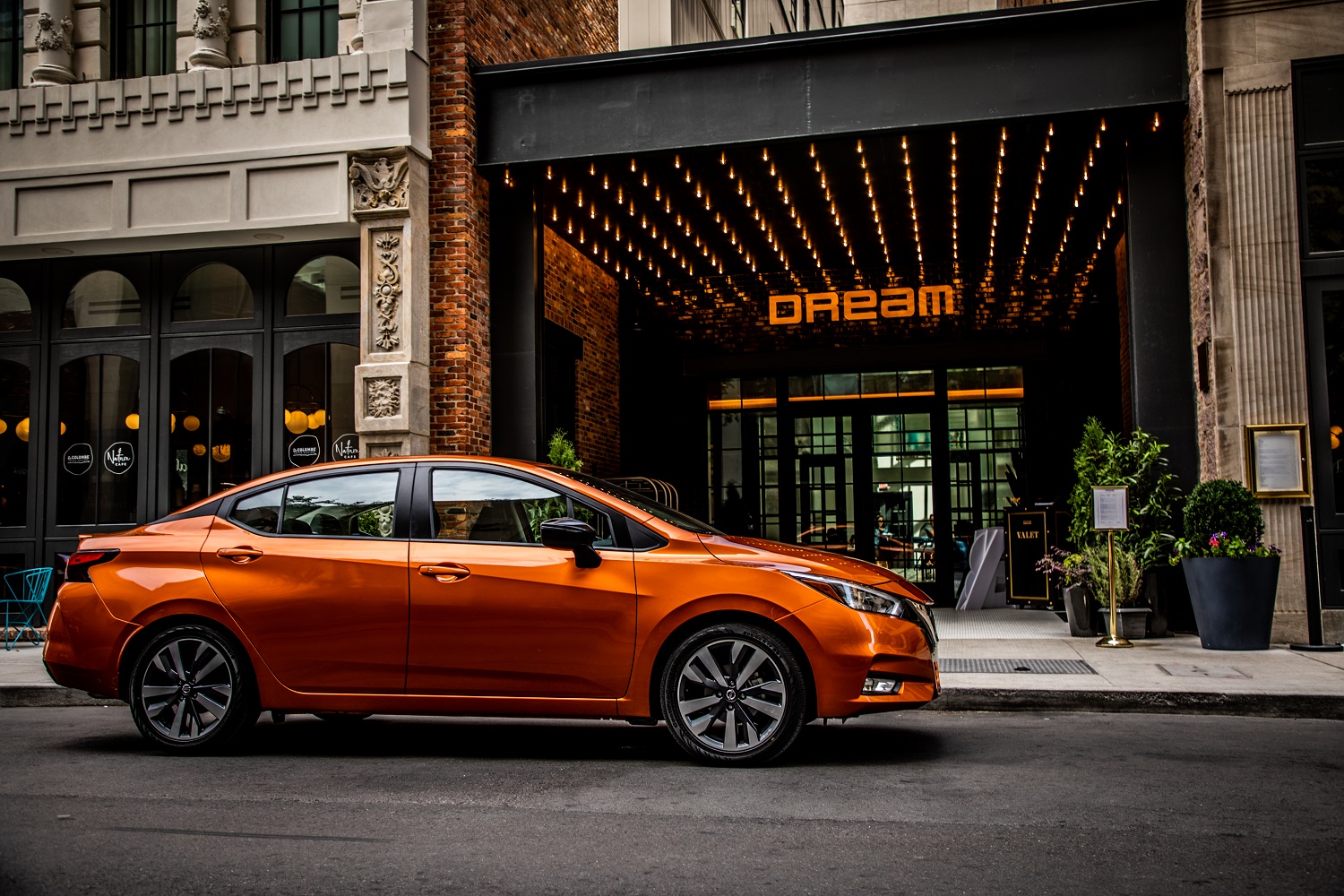 This being a Wards review, we thoroughly examine the interior design and materials and deem the Versa above average on both counts.

The SR grade of the Versa we spend a day test-driving here bears a strong resemblance to the SR grade of Nissan’s Kicks small CUV, winner of a 2019 Wards 10 Best Interiors award. Both effectively use orange as an accent color on black surfaces. The Versa’s instrument panel and door pads have orange stitching, while black cloth seats have a black-orange fabric on cushion edges as well as down their centers.

A painted matte silver trim decorates portions of the door, as does carbon-fiber-look plastic trim. In photos of the mid-grade SV (netting buyers Apple CarPlay and Android Auto, blindspot warning and rear-cross-traffic alert) white is the accent color on the faux-leather soft pad of the IP as well as seat edges.

Most physical controls are large, although seek buttons unfortunately are a bit of a stretch to reach for a driver as they are placed to the right of the touchscreen.

The shorn-rat-fur headliner and hard-plastic visors also are unfortunate, but probably a sacrifice to pay for that touchscreen and the nicer materials elsewhere. (To be fair, the visors are huge with big extenders, something you don’t always find in luxury cars).

We’re on record as not loving Nissan’s touchscreens as they seem rather cramped, but the color and resolution of this one, and the menu structure, are good like in the Kicks.

Powertrains almost never are a highlight of subcompacts, unless you’re talking performance B-cars like the Hyundai Veloster N, but the Versa’s now 7% torquier and 12% more powerful 1.6L DOHC 4-cyl., paired to a CVT, is sufficient for most roadways.

The SR has a civilized feel from behind the wheel on most flat routes here due to its quick and quiet acceleration. Nissan CVTs use simulated shift points to feel more like step-gear automatics and the automaker says it upgraded the shift logic of the Versa’s CVT to create faster response and smoother gear transitions.

In some hillier areas, where a heavier throttle is required to climb inclines, engine drone predictably rears its ugly head. If you like quiet and live in a mountainous state, subcompacts are not a great choice for you.

One of the best things about the new Versa is the ability to get adaptive cruise control, affordably. The car’s ACC is part of a $300 package on the SR that also comes with heated seats.

In numerous tests of ACC, it slows us to nearly a full stop more than once – and a few times doesn’t. And, like many lane-departure warning systems, this one only sometimes picks up on the painted lines. That’s why they call this stuff advanced driver assist systems, folks, so don’t let your guard down when using any ADAS tech.

Rear door alert, reminding drivers to check the rear seat, is a great standard feature that can save kids’ and animals’ lives and should be used by all OEMs. If the driver opened and closed the door before a journey it reminds him or her to check the back seat when they exit the vehicle.

Ride and handling is OK – again not usually a strong suit of subcompacts, other than they tend to be fling-able in turns due to their relatively light weight. Nissan ups cornering stability thanks to a more rigid body than the outgoing Versa, and a 15% lower roll angle.

The Versa is more expensive than before, but you get a lot more for the roughly $2,300 increase in base price over the ’19 model.

Ranging from $14,730 to $18,240 (not including an $895 destination and handling fee) the ’20 Versa is a great deal with some technologies not available on its most cross-shopped competitors the Hyundai Accent and Toyota Yaris, such as blindspot warning and rear-cross-traffic alert, or for which you’d have to spend more money to get (push-button start, AEB) on those rivals.

Hyundai, never one to rest on its laurels, most likely will answer back with the next-gen Accent, but right now the Versa is overall the best vehicle in the segment. If you’re on a tight budget, and want a well-featured new car, you should check it out. 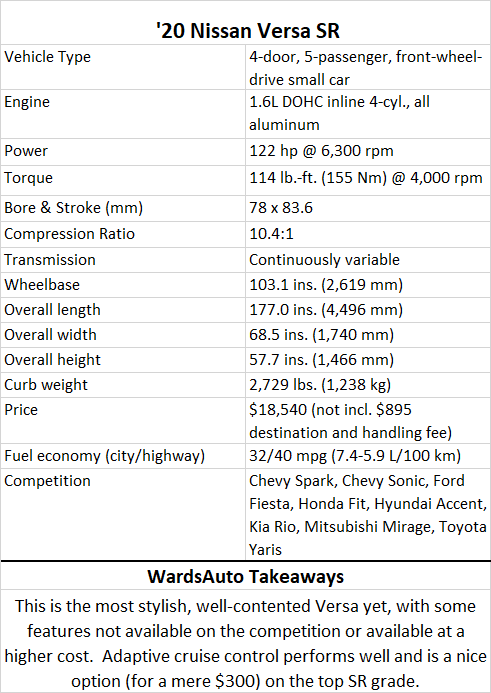