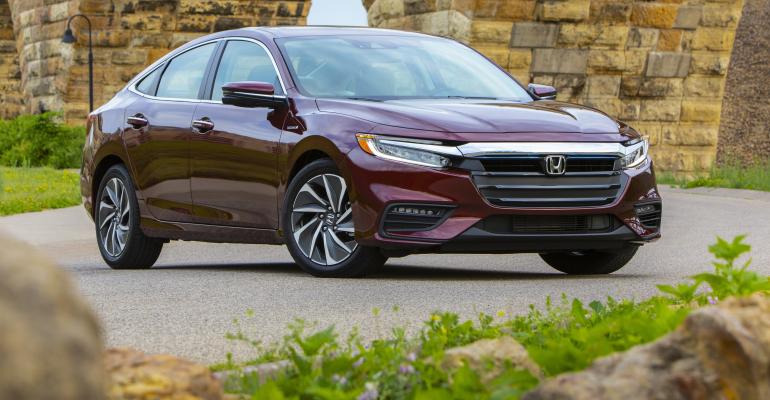 The third-generation Insight isn’t a space pod or Prius wannabe. It is a beautiful, bullet-proof Honda that will look good in anybody’s driveway and starts at less than $23,000. That’s a value proposition that will put dents in CUV sales charts.

MINNEAPOLIS – In 1999, Honda introduced the first-generation Insight hybrid-electric vehicle in the U.S. It was designed to look like a car from the future and displayed its green credentials like a peacock. Buyers were not impressed and it exited quietly in 2006.

In 2000, Toyota launched its Prius sedan in the U.S. and the rest is history. The sleek 5-door second-generation design debuted in 2004 and the Prius has dominated the conventional hybrid segment since.

Honda introduced a new Insight in 2010 that looked a lot like the Prius and billed it as “the world’s most affordable hybrid,” but it was axed in 2014.

Now Honda is launching a third-generation Insight with a very different strategy: It’s not flaunting the car’s innovative hybrid-electric powertrain or trying to imitate the Prius. It’s touting the new car’s good looks, roomy interior and long feature list. It mentions 52 mpg (4.5L/100 km) combined fuel economy almost as an afterthought, in case you sort of care about saving piles of money at the pump. (The top-of-the-line Touring trim version, which we tested, has a slightly less impressive 48 mpg [4.9L 100/km] combined rating, but we digress.)

It’s a wise strategy. The hybrid market is not a good place to be these days. Despite the availability of three dozen highly competent HEV models, interest in conventional hybrids is evaporating. Efficiency-conscious buyers are migrating to plug-in hybrids and battery electric vehicles or just going back to traditional gasoline powertrains. Through May, hybrid sales were down 9.4% overall in the U.S., according to Wards Intelligence data.

Mighty Toyota introduced a dramatic, polarizing redesign for the Prius in 2016 to shake off the cobwebs, but it didn’t work. Reviewers savaged the new sharp-edged styling and deliveries are down 30.1%, to just 22,436 units through May. But following the trend – and tax incentives that can make plug-ins cheaper than standard hybrids – year-to-date sales of the Prius Prime PHEV variant are up almost 50%, to 12,018 units.

All this explains why the new Honda Insight looks like an entry-level luxury sedan rather than an angry spaceship.

And indeed, it is. Sitting on the current Civic platform, with the same wheelbase, the new Insight is slightly longer in front and a bit shorter in back than the Civic. Its metal skin has been pinched and pulled in all the right directions to give it great proportions. It has a low, wide stance and features subtly sculpted surfaces and an understated grille instead of the garish lines, gaping mouths and busy, origami-like edges that are part of so many of today’s aggressively styled cars.

But that doesn’t mean Honda designers and engineers were holding back. With so much of our attention today focused on powertrain, interiors and the user experience, we were surprised how much time we spent simply admiring Honda’s prodigious manufacturing prowess: perfect panel gaps, beautifully formed sheet metal and spectacular finishes.

The optional metal-flake paint gives the car a jewel-like quality in the light, shifting shades according to viewing angle to accentuate the car’s subtle curves, like a concept car on display at an auto show.

Few automakers have mastered the art of manufacturing like Honda and it shows in the Insight. Kudos to the folks in Greensburg, IN, where it is built.

With a price ranging from $23,000 to $28,000 (not including $895 dealer delivery) the Insight slots between the Civic and the Accord, which now is a big car and a bit pricey. The Insight is aimed at a more mature demographic than Civic that includes almost equal portions of Millennials, Gen X and Boomers. Put the demos together and they boil down to grownups looking for a sophisticated but sensible car.

Honda says the primary competition includes the Prius One and Hyundai Ioniq Blue hybrids as well as non-hybrids such as the Mazda3 Touring and Volkswagen R-Line.

A key reason the Insight can compete with conventional gasoline powertrains is because it offers comparable power and torque numbers and has a real trunk and fold-down rear seats. Most hybrids have trunk space compromised by the vehicle battery, but the Insight’s has been moved underneath the rear seat.

The hybrid power unit is Honda’s latest two-motor system which debuted on the ’18 Accord, except the Insight’s is mated with the automaker’s 1.5L Atkinson cycle engine rather than the Accord’s potent 2.0L.

The system allows the Insight to operate as a series hybrid, a parallel hybrid or an EV, switching seamlessly between these three operating modes based on the demands of the driver and conditions. In most situations, the Insight operates as a series hybrid, with the electric propulsion (traction) motor providing mechanical power to the front axle with energy supplied by the batteries or the generator motor.

Unlike many competing hybrid systems, Honda’s operates without using a conventional stepped or continuously variable transmission. Instead it uses a high-capacity lock-up clutch that connects the engine/generator motor combo to the propulsion motor. This allows power to be supplied directly from the engine to the front wheels, supplementing the propulsion motor under certain conditions for either maximum power or efficiency.

This system makes the car feel like an EV at slow speeds and in traffic, but under hard acceleration or going up hills the ICE will rev loudly without providing corresponding acceleration, which can be confusing unless you understand the engine is making electricity to send to the wheels rather than turning them directly.

Like you would expect, the engine is at its best darting around in city traffic. Putting it in sport mode and mashing the accelerator is less satisfying.

But maximum system output is 151 hp and 197 lb.-ft. (267 Nm) of torque, more power and the same fuel efficiency as its compact hybrid competition and similar output and far better efficiency than its non-hybrid competitors.

Inside, the Insight shows Honda is continuing to improve its interior design. After threatening to remove all knobs and buttons not long ago, the Insight offers two big, fat knobs for climate control functions and a smaller volume control knob, in addition to steering wheel controls. Most user-experience experts say the center stack should offer at least two big knobs for basic controls.

There also is a nice carve-out next to the electronic shifter for all sizes of smartphones, although wireless charging is not available. High quality materials are used for all trim levels and interior fit and finish is top notch throughout.

Many believe consumers no longer want to buy cars, but that isn’t accurate. Consumers are favoring CUVs over cars from many manufacturers, but not all. Honda proudly points out it has sold 680,000 cars so far this year, and that the compact car segment is the third largest in the U.S. after fullsize pickups and midsize CUVs. And the Civic is the No.1 selling car in the U.S.

The third-generation Insight isn’t a space pod or Prius wannabe, it is a beautiful, bullet-proof Honda that will look good in anybody’s driveway and starts at less than $23,000. And in case anybody is worried about gas prices, it averages about 50 mpg (4.7 L/100 km). That’s a value proposition that will put a few dents in CUV sales charts.