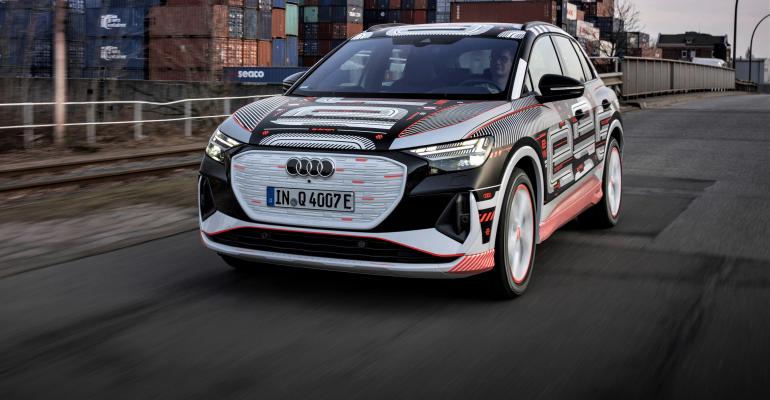 Originally previewed as a concept at the 2019 Geneva auto show, the fourth dedicated electric-powered Audi model is planned for North American delivery before the end of the year.

HAMBURG, Germany – The car you see here beneath the camouflage is Audi’s new Q4 e-tron CUV – and Wards has been invited to drive the pre-production prototype ahead of a planned unveiling in April.

Originally previewed as a concept at the 2019 Geneva auto show, the fourth dedicated electric-powered Audi model is planned for North American delivery before the end of the year. It joins the e-tron quattro CUV, e-tron Sportback and e-tron GT quattro in the German automaker’s lineup of zero-emission models.

It is not the only upcoming Q4 e-tron model, though. As hinted at by a second concept revealed in 2020, Audi also is set to launch a more sporting Q4 e-tron Sportback featuring a more sloping, liftback-style tailgate. Together, they take aim at the BMW iX3, Mercedes-Benz EQA and Tesla Model Y in what is expected to become a hard-fought compact electric CUV market segment in the U.S.

The two new Q4 e-tron models are based on Audi parent company Volkswagen’s MEB electric car platform. They share their drivetrain, lithium-ion battery, charging technology and chassis among other components and functions with the Volkswagen ID.4 and SEAT el-Born, alongside which they will be produced in Volkswagen’s Zwickau manufacturing plant in Germany, as well as the Skoda Enyaq iV produced at Mladá Boleslav in the Czech Republic.

The Q4 e-tron CUV has progressed into a pre-production phase of development with few stylistic changes over the earlier concept. The overall proportions are similar to those of the ID.4, el-Born and Enyaq: All four cars share the same manufacturing hard points, though the styling is clearly Audi in character, and with a claimed drag coefficient of 0.26 suitably aerodynamic.

Audi has worked to ensure its new CUV is seen as a dedicated model in its own right. This is reflected within the interior (below), which receives its own unique dashboard, including a newly styled steering wheel with touch-sensitive controls, a 10.25-in. (26-cm) digital instrument display and a standard 10.1-in. (26-cm) (optional at 11.6 ins. [29-cm]) MMI infotainment touch display featuring a “Hey Audi” voice control function and an augmented reality head-up display as optional.

Despite similar external dimensions to the latest Q3, the Q4 e-tron’s flat floor helps provide it with interior space comparable to the larger Q5 CUV, most notably in the rear which features a bench set 2.8 ins. (7 cm) higher than the front seats and offers an impressive amount of leg-, head and shoulder room. 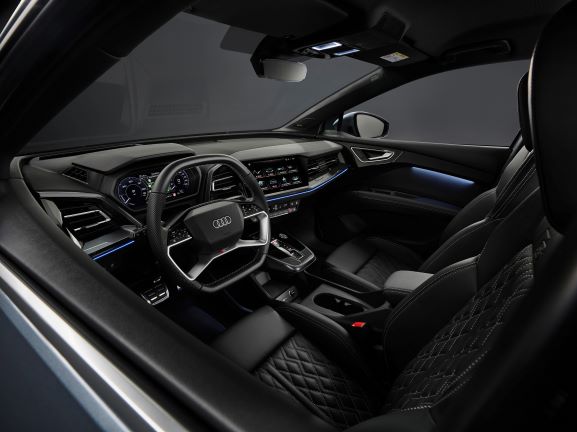 There’ll be an extended range of Q4 e-tron models featuring both single-motor rear-wheel-drive and dual-motor all-wheel driveline setups in combination with either a 52-kWh (net) or 77-kWh (net) Li-ion battery and a charging system supporting 11-kW AC and 125-kW DC recharging.

To get under way you draw a slider-like shifter mounted on the center console (below) backwards into D (Drive) and nudge the throttle. There’s instant response and genuinely strong accelerative qualities up to and beyond typical city speed limits, as we’ve become accustomed to with the modern crop of electric CUVs. 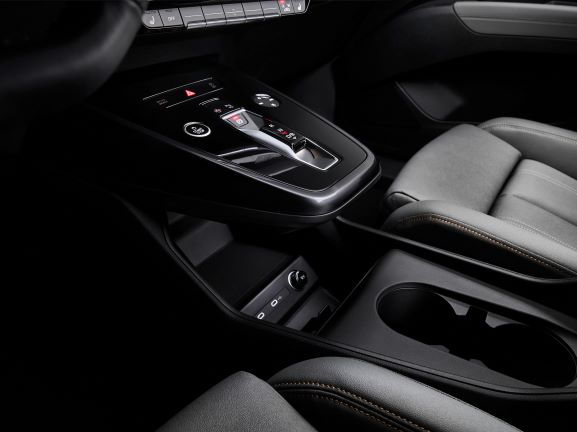 Audi estimates 0-62 mph (100 km/h) acceleration at “around 6.0 seconds.” Increasing aerodynamic drag and rolling resistance reins in acceleration and overall performance at higher speeds, though there are sufficient reserves for a limited 112-mph (180 km/h) top speed.

There is a faint whine to the operation of the electric motors under load and some wind buffeting around the exterior mirror at highway speeds. But this is a prototype, so we’ll reserve judgment until we drive the production version later this year.

Generous space within the front wheelhouses makes for a tight 33.5-ft. (10.2-m) turning circle and excellent maneuverability. The steering is quite light at low speeds but weights up nicely as speeds increase, with a precise action albeit without much feedback.

With the battery mounted low within its dedicated platform structure and an evenly balanced front-to-rear weight distribution, the handling is well controlled with good response upon turn-in, low levels of body roll together with strong grip and excellent traction in tighter corners.

The sports suspension used by the prototype we’re in sits 0.6-in. (15-mm) lower than the Q4 e-ton’s standard underpinnings. It can be ordered with adaptive damping control in combination with a drive select program offering four driving modes: Efficiency, Comfort, Dynamic and Individual.

With 20-in. tires shod with 235/50 profile front and 255/45 profile rear tires, the ride is fairly compliant in Comfort mode, though the sheer weight of the new Audi does occasionally challenge the otherwise controlled qualities on uneven road surfaces.

Paddles on the steering wheel alter regenerative braking in three stages; the lower level simulates the braking force of a conventional combustion engine while the higher settings provide greater retardation and energy harvesting.

Expect an official WLTP range around 311 miles (501 km) on the larger of the two batteries, albeit less in real-world driving. The regenerative braking is certainly impressive, but as with rivals the operation of ancillary functions such as the air conditioning and seat heaters tend to lessen the overall range. 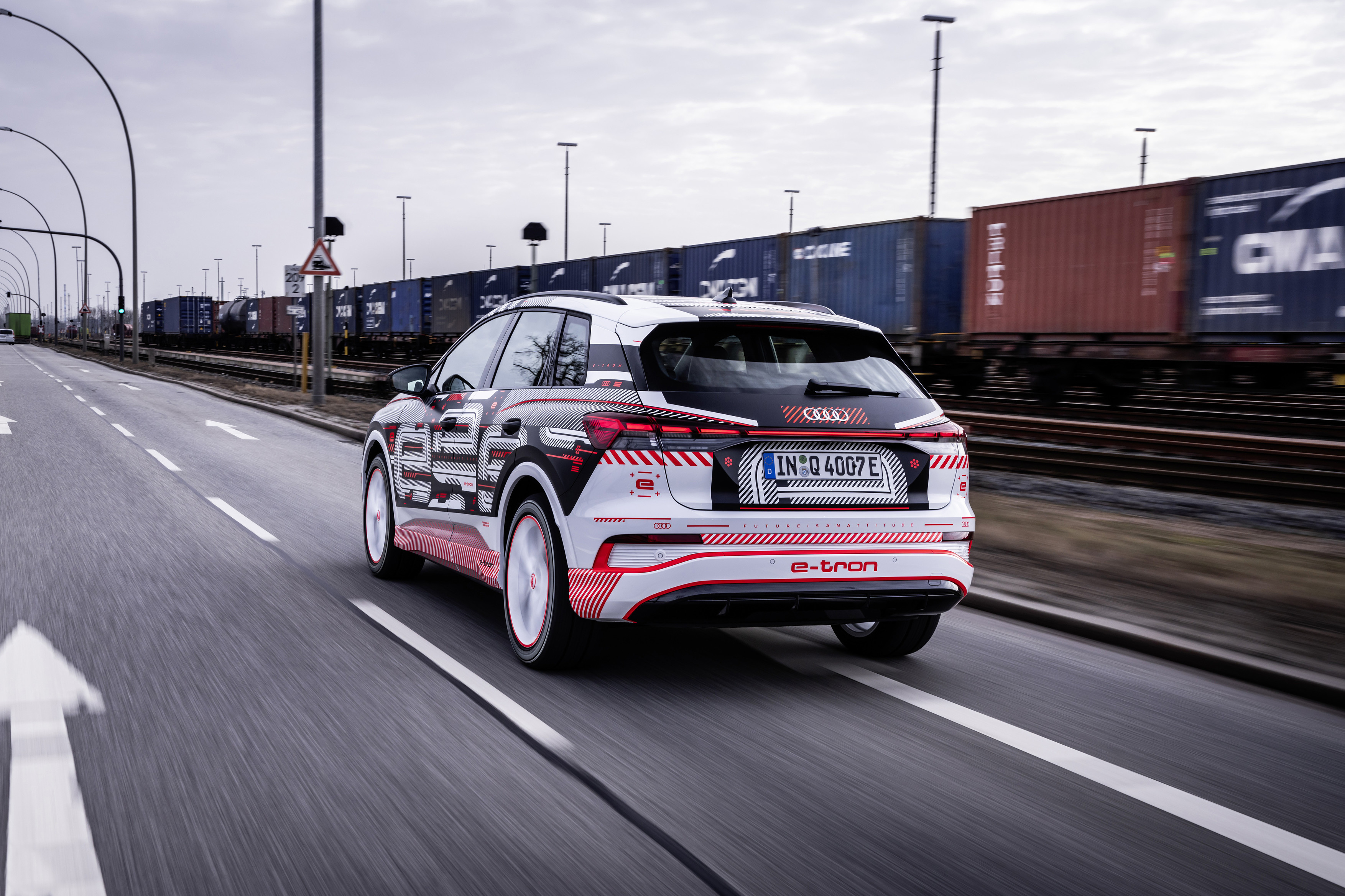