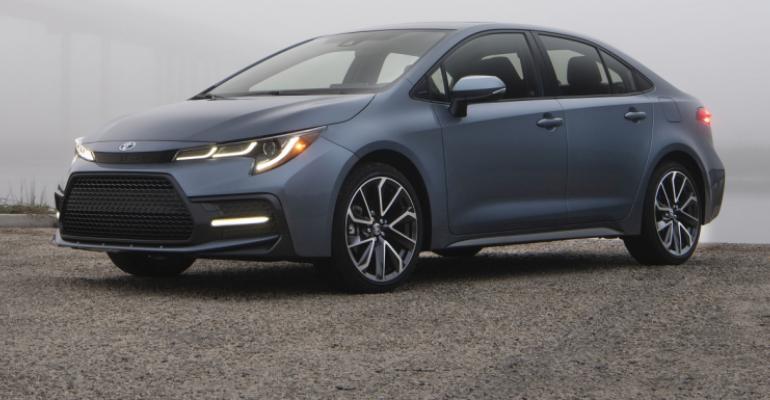 New 2020 Toyota Corolla Has Much to Offer

The latest generation of Toyota’s venerable C-segment sedan has great fuel economy, especially from its new hybrid grade, and lots of standard technology for not a lot of money.

SAVANNAH, GA – As one of the best-selling car nameplates in the history of the U.S. light-vehicle industry – 11.2 million sold since 1970, per Wards Intelligence data – the Toyota Corolla has a lot to live up to.

The good news is the redesigned ’20 Corolla sedan, on sale now in the U.S., is the best version of the compact 4-door we’ve driven and boasts a great new hybrid version, too.

The bad news is the appetite for cars of any size is waning in the U.S. and elsewhere as drivers embrace the utility and higher ride height offered by CUVs in a time of relatively cheap gas.

The Detroit Three have decided to exit the segment, sales of their entrants declined so much.

Corolla sales fell last year and are expected to fall further even with the new generation 4-door.

But the car remains a big seller – 285,865 U.S. sales in 2018 – and Toyota is hopeful the new generation has enough allure for those who still want a compact.

While the outgoing Corolla’s fuel-efficient-but-unexciting 1.8L 4-cyl. and CVT combo continue on in the L, LE and XLE grades, sport grades of the sedan, the SE and XSE, get the same 2.0L “Dynamic Force” 4-cyl. found in the new Corolla Hatch. The 2.0L is smaller and lighter than the 1.8L and has Toyota’s power- and efficiency- minded D-4S direct- and port-injection technology. (We don’t test an available 6-speed manual in the 2.0L SE.)

But the big news for the ’20 Corolla lineup is the addition of a hybrid variant. It’s been available in other markets for years. Based on our Savannah test drive, it has phenomenal fuel economy. More on that later.

The Corolla hatch and now sedan ride on Toyota’s new TNGA-C platform, which is more rigid than the outgoing Corolla’s thanks to more ultra-high-tensile steel and structural adhesives.

A multiload-path front structure is “totally new,” Toyota says, able to better absorb and disperse energy in frontal collisions to help keep the passenger compartment intact. Meanwhile, side collision severity should be lessened due to squared figure-eight-reinforced ring-shaped door structures.

The Corolla’s ride is quite comfortable, even when we veer off course onto some potholed streets. No doubt Toyota’s change to a multilink rear suspension from the outgoing Corolla sedan’s torsion beam helps soften blows.

The car still has a MacPherson strut front suspension but it has been “totally revised,” with new shock absorbers and a strut bearing mounted coaxially to lessen the impact from road craters.

Without Scion around anymore, as it was when the outgoing Corolla launched in 2013, Toyota can amp up its compact sedan’s performance without stepping on any toes.

The Corolla’s chief engineer, Yasushi Ueda, was noncommittal when asked if Toyota would ever pursue a challenger for the Civic Si. The Civic is the Corolla’s chief rival in the compact segment, and last year was the No.1-selling C-car in the U.S. while Corolla placed second.

The 52-mpg combined rating is the same as the Prius’ LE, XLE and Limited grades and at $2,000 less than the Prius LE, and with less polarizing styling, we predict the Corolla Hybrid will overtake the Prius as Toyota’s best-selling hybrid car.

Many automakers, Toyota included, continue to step up the style in the cabins of their lowest-priced vehicles in an effort to distract from affordable but sometimes unsightly hard-plastic trim.

The XSE grade does this with eye-catching black-and-blue seats, as well as blue accent stitching on the instrument panel. The LE and hybrid grades tested here have an hourglass-style stitch pattern on the seats.

The hybrid and XSE have thickly padded upper door panels for soft touchpoints. Fit-and-finish throughout all grades we drive here is good.

The Corolla’s touchscreen, similar in size and layout to those in other newer Toyotas, including the C-HR and RAV4 CUVs, isn’t a favorite. Its virtual buttons are close together, making it easy to hit the wrong button. As with the screen in the new RAV4, resolution is fuzzy.

We also aren’t a fan of hard-to-reach audio switchgear placed right of the screen, but thankfully the car’s standard voice-recognition system accurately and quickly responds to audio and navigation commands.

Like most new Toyotas, Apple CarPlay is standard in the Corolla, as is WiFi (pending a Verizon subscription).

Toyota’s Safety Sense 2.0 suite of advanced driver-assist technologies (ACC, LDA, BSM, etc.) is standard on every Corolla, a remarkable thing considering many German luxury brands still upcharge for those features and the Corolla ranges from just $19,500 to $25,450 sans handling fees.

Like the Corolla hatch, newer ADAS features such as road-sign detection and lane-centering technology are included, with the latter thankfully not too intrusive during testing.

With decades of reliability under its belt, the Corolla should continue to be a top-selling vehicle in the U.S. The 250,000 annual sales Toyota forecasts, although down from the 300,000-plus of the past, sounds right in the current market and should be easy to achieve, as should a hybrid take-rate of 10% given the green car’s $22,000 starting price and great mpg.

Assembled in Blue Springs, MS, or Takaoka, Japan, the new Corolla sedan is on sale now at U.S. Toyota dealers. 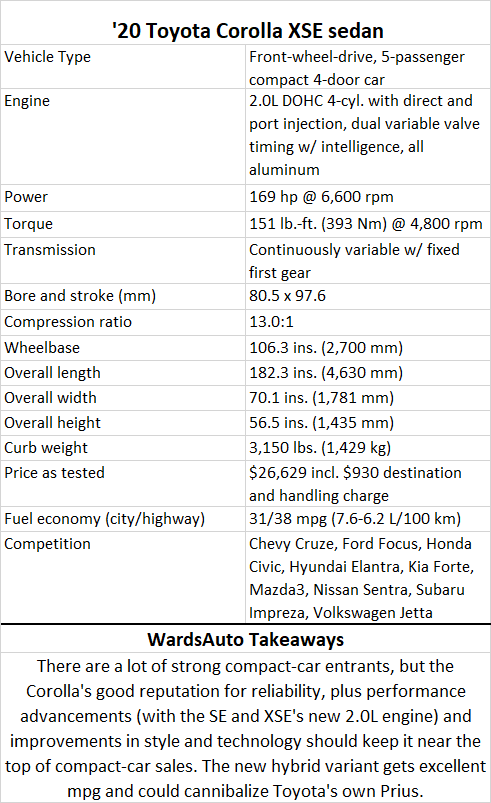