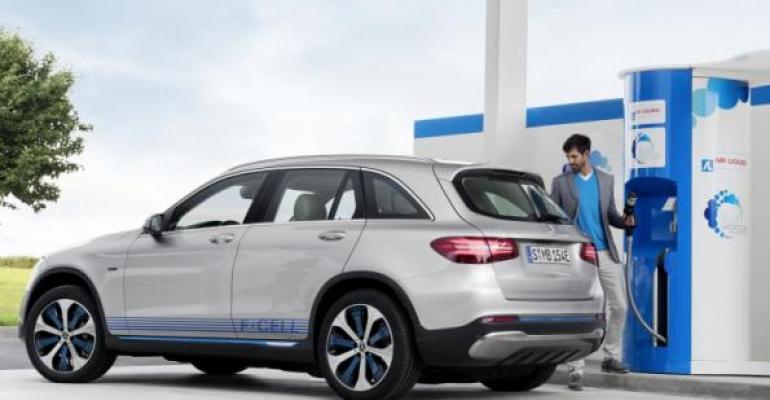 The GLC F-Cell takes hydrogen fuel-cell vehicles to a new level, leapfrogging the efforts of Toyota with the 2-year-old Mirai, which until now has proved the benchmark in the class.

STUTTGART, Germany – As global automakers seek to improve the range and reduce the charging times of battery-electric vehicles, we’ve been hearing more and more about the potential of fuel cells.

But despite efforts to establish a global hydrogen fueling infrastructure, their complex nature and high production costs mean they appear destined to remain a fringe solution as a potential power source for road cars in the foreseeable future.

Yet this hasn’t deterred a growing number of automakers from pouring vast amounts of money into the development of hydrogen fuel-cell technology, which can provide a car with range commensurate with conventional gasoline-engine models while emitting nothing but water in the form of steam. The latest example is the new Mercedes-Benz GLC F-Cell, joining a limited number of hydrogen-fueled road cars to reach production maturity and be offered to the public.

The advanced new SUV is the result of a development program at the German automaker that kicked off in 1994 with the unveiling of the commercial-vehicle-based NECA 1. Available for lease in selected countries, it was followed by the B-Class F-Cell, of which some 200 examples were produced between 2011 and 2017 in what is described as the largest fleet of hydrogen fuel-cell vehicles yet established for testing purposes.

The GLC F-Cell takes HFCVs to a new level, leapfrogging the efforts of Toyota with the 2-year-old Mirai, which until now has proved the benchmark in the class. Mercedes’ secret weapon is a fuel-cell stack that not only is 25% lighter and 30% more compact but also offers 40% greater power while using 90% less platinum than the unit employed in its predecessor.

The stack sits on the same engine mounts as more conventional gasoline and diesel engines in the new Mercedes-Benz SUV, producing electricity from a combination of hydrogen and oxygen that is sent to a battery to power an electric motor mounted within the rear axle, driving the rear wheels.

The only outward signs of the advanced powertrain technology are some blue highlights within the grille and sills together with unique alloy wheels and F-Cell badges at the rear. Otherwise, it looks like any other first-generation GLC SUV.

Along with its newly developed fuel-cell stack, the GLC F-Cell accommodates two carbon-fiber hydrogen tanks – one mounted within the center tunnel and the other underneath the rear seat, each pressurized to 10,153 psi (700 bar). This permits a refueling time similar to that of gasoline and diesel versions of the SUV in less than three minutes. With 4.4 kg (9.7 lbs.) of hydrogen on board, it promises to deliver a range of up to 438 km (272 miles).

FCV, PHEV All in One

In a setup mirroring that of the GLC 350e plug-in hybrid, Mercedes-Benz has combined the fuel-cell stack with a 13.8-kW/h lithium-ion battery mounted within the floor of the cargo compartment. This allows the GLC F-Cell to be plugged in via a port within the rear bumper to increase its range by a claimed 48 km (30 miles), giving it a potential range of over 483 km (300 miles).

The decision to engineer it exclusively with rear-wheel drive cut both complexity and weight. However, the addition of the Li-ion battery and associated power electronics still sees the new Mercedes-Benz tip the scales above other GLC models at 2,038 kg (4,530 lbs).

While it sounds complex, the GLC F-Cell seems just like any other modern-day battery-electric vehicle to drive.

A Mercedes-Benz development engineer is behind the steering wheel for our introductory ride, which takes in country roads around the automaker’s R&D center near here. To move off, you nudge the Drive Select column-mounted gear lever into D and apply some throttle.

The initial step-off is programmed to be achieved through electrical energy from the battery alone, so as to allow the fuel-cell stack to build pressure as it begins to generate electricity from the hydrogen and oxygen from air channeled to the engine bay. Generous torque from the electric motor provides urgency as we set off, acceleration swift and silent.

On the move, the FCV is nicely refined, running whisper-quiet at posted speed limits. Delivery of power is seamless, even when our driver begins switching through the various driving modes. One noticeable absence is the customary vibration caused by the pump used to feed the fuel-cell stack with hydrogen. It has been an annoying feature in FCVs we’ve driven previously, including the Mirai.

The suspension has been tuned to cope with the added weight brought on by the battery. But while it manages to provide acceptable comfort on smooth surfaces at higher speeds, it tends to become a little unsettled with increased impact harshness when faced with utility-access covers and the like at lower speeds. From the passenger seat, it feels much like the GLC 350e plug-in hybrid running in electric mode.

Best of Both Worlds

Several subtle changes within the interior separate the GLC F-Cell from its more conventional siblings, including Mercedes-Benz’s latest multi-function steering wheel featuring touchpads within the upper spokes and a 12.3-in. (31-cm) digital instrument display with individual readouts showing the amount of hydrogen in the two tanks as well as the state of charge of the Li-ion battery.

An energy flow display within an infotainment monitor also allows you to keep tabs on what power sources you are using, while a toggle switch next to a touchpad-equipped controller for the new car’s infotainment system within the center console is used to call up the different driving modes.

In terms of practicality, the new Mercedes-Benz can’t quite match its gasoline- and diesel-powered siblings. The packaging of the rear hydrogen tank has raised rear seat height 40 mm (1.6 ins.), reducing headroom in the process. The mounting of the Li-ion battery within the floor of the trunk reduces cargo capacity. Still, there’s more than enough room for daily use.

These packaging compromises aside, the GLC F-Cell is well conceived, offering prospective customers the best of both worlds. It combines the zero-emission qualities of a battery-electric vehicle with the potential range of a traditional gasoline-fueled car. In this respect, it could be driven every day without demanding any significant change in driving habits.