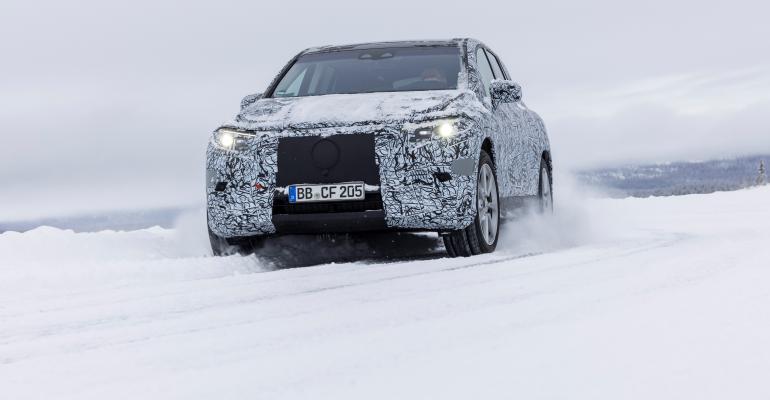 Our brief encounter with a prototype of the new 7-seat EQS on the frozen surface of Mercedes-Benz’s winter testing facility has taught us that performance and dynamic finesse will be among the BEV’s stronger attributes.

ARDVISJAUR, Sweden – Mercedes-Benz isn’t holding back when it comes to launching electric models. It’s been just 2 1/2 years since the EQC CUV arrived to mark the German automaker’s somewhat belated entry into the battery-electric-vehicle ranks.

Since then, there have been five more zero-emission offerings with the three-pointed star, including the EQV, EQA, EQS, EQB and EQE – seven if you include the Smart ForTwo (coupe and cabriolet) and ForFour, both introduced prior to Mercedes-Benz’s decision to off-load half of its underperforming city-car division to Chinese automaker Geely in 2020.

In addition, Mercedes-Benz’s commercial-vehicle division has launched the eVito, eCitan and eActros in recent months.

Still, despite the impressive show of intent up to now, the push to establish Mercedes-Benz at the forefront of the premium-brand BEV set continues to gather pace.

Welcome, then, the new EQS.

Based on Mercedes-Benz’s dedicated EVA (electric vehicle architecture) platform, the same structure that underpins the recently introduced EQS liftback and EQE sedan, the plush new battery-electric SUV is set to become the flagship of the EQ range when it goes on sale in North America later this year following a planned world premiere at the 2022 Beijing auto show. 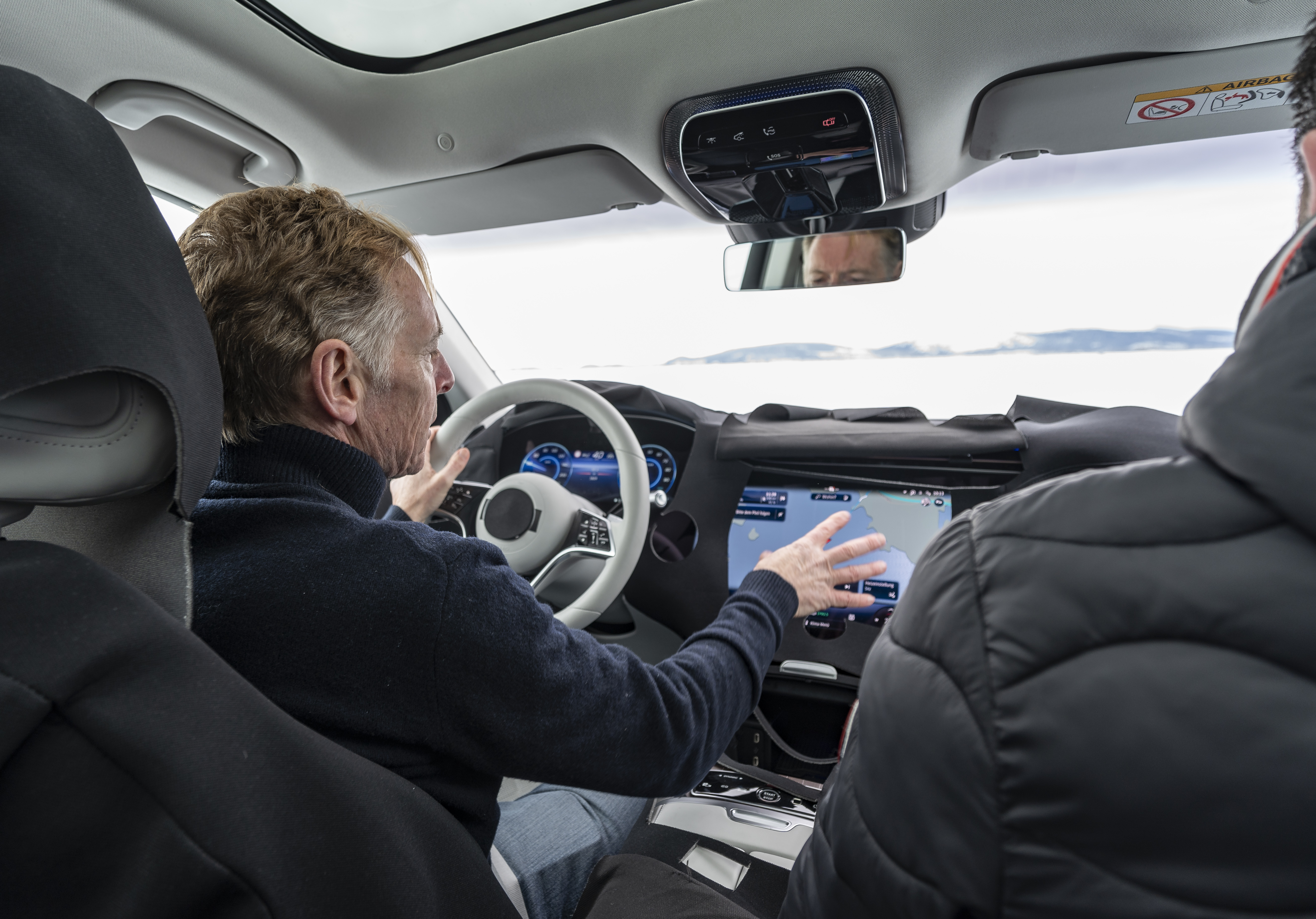 It also will be the first electric-powered model to be produced at Mercedes-Benz’s U.S. plant in Tuscaloosa, AL, where a new battery-production facility is set to go online this week, accompanying existing production operations for the combustion-engine GLE, GLE Coupe and GLS SUV at the site. Other electric models to be produced there include the smaller EQE CUV, which is planned to be unveiled later this year.

The EQS SUV prototype driven here for the first time is one of a number of new EQ models currently being tested by Mercedes-Benz engineers in the icy climate of northern Sweden. The tests follow a similar program carried out in the deserts of Nevada.

“The extreme temperatures are paramount to the development process,” says Holger Enzmann, head of digital integration for the EQ model line. “We rely on them to help us calibrate the various driving-assistant systems as well as the comfort functions, not to mention factors such as sealing and ventilation.”

The thinking is, if they all work as they are supposed to in below-zero temperatures on a lonely frozen lake not far from the city of Arvidsjaur, they’ll work anywhere.

We won’t get a proper look at the specifications of the EQS SUV until closer to its unveiling next month, but at more than 205 ins. (5,207 mm) in length, it is positioned two classes higher than the 187-in. (4,750-mm) -long EQC. Its extra-large dimensions become apparent when we spot it among a throng of Mercedes-Benz prototypes and get to view it up close for the first time. 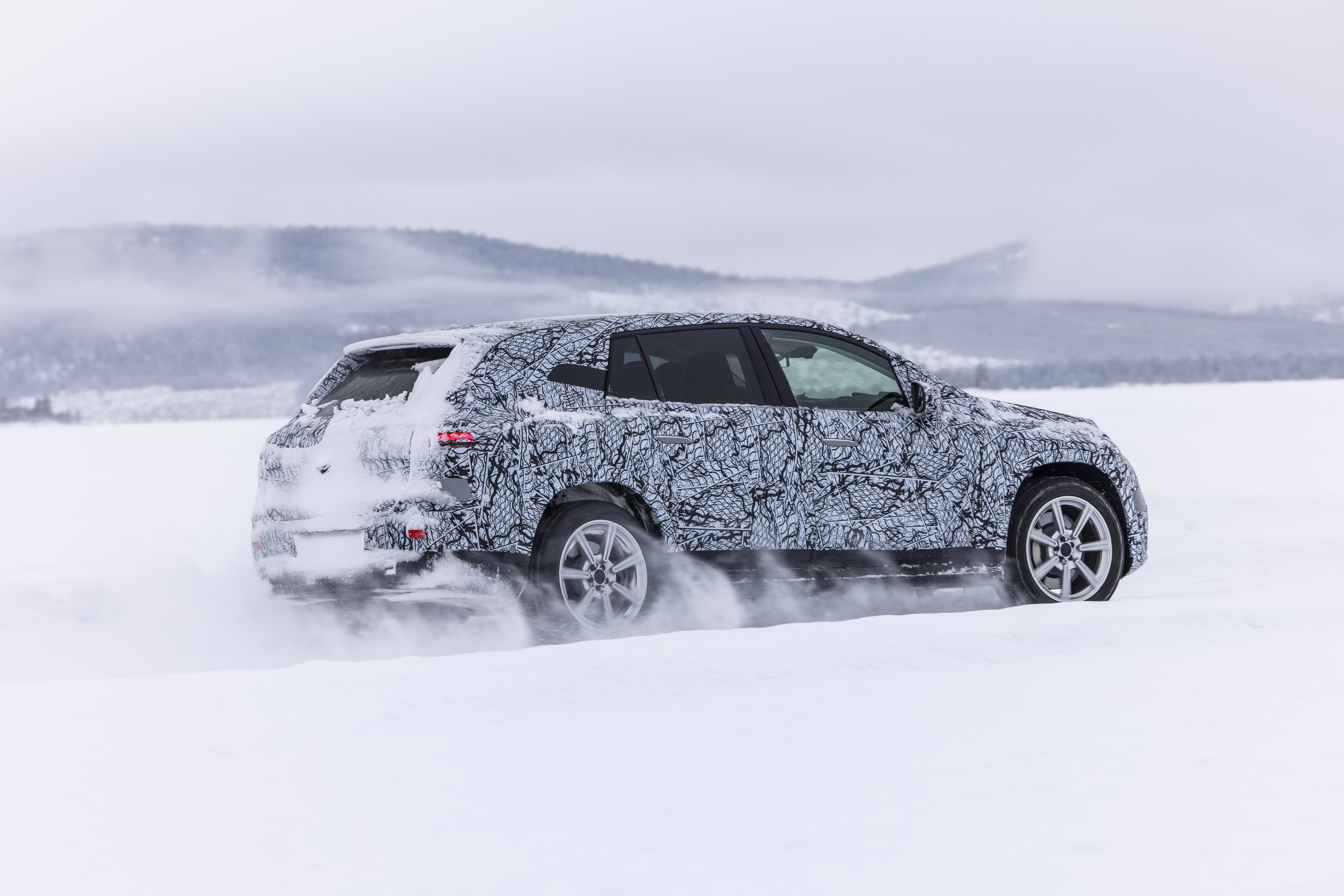 The proportions of the big SUV, which is set to sire an even more luxurious Maybach variant that will compete against the upcoming Rolls-Royce Spectre BEV by the middle of the decade, differ quite a bit from Mercedes-Benz’s more traditional-combustion engine SUV models: There’s a shorter hood, longer wheelbase accommodating a large cabin and relatively short rear overhang.

“It’s not a conversion design,” says Enzmann, suggesting the EQS SUV hasn’t just been adapted from a combustion-engine model, as is the case with the smaller GLC-based EQC CUV. “Rather, it has been developed from the ground up without the compromises you eventually run into when backing onto an existing platform.”

In its extensive disguise, there’s obviously not a lot we can tell you about the styling of the new Mercedes-Benz model that you probably won’t already have gleaned from the photographs here.

Underneath the plastic wrap covering the exterior, characteristic cues such as the black-panel grille, fixed clamshell-style hood and a windshield-washer-bottle port within the front left-hand flank provide direct design links to the EQS liftback.

The significantly taller EQS SUV does include new design elements, though, including running boards underneath its big doors which, unlike the openings of the EQS and EQE, feature a framed design. Enzmann says they help improve aerodynamic efficiency by providing a smoother flow of air down the side of the body. The tailgate includes an angled window but is otherwise vertical, opening at bumper level.

The prototype we got to drive out on the ice of Mercedes-Benz’s test facility wore 21-in. wheels, though we’re told the EQS will offer even larger 22-in. rims when sales begin in the U.K. during the second half of the year. 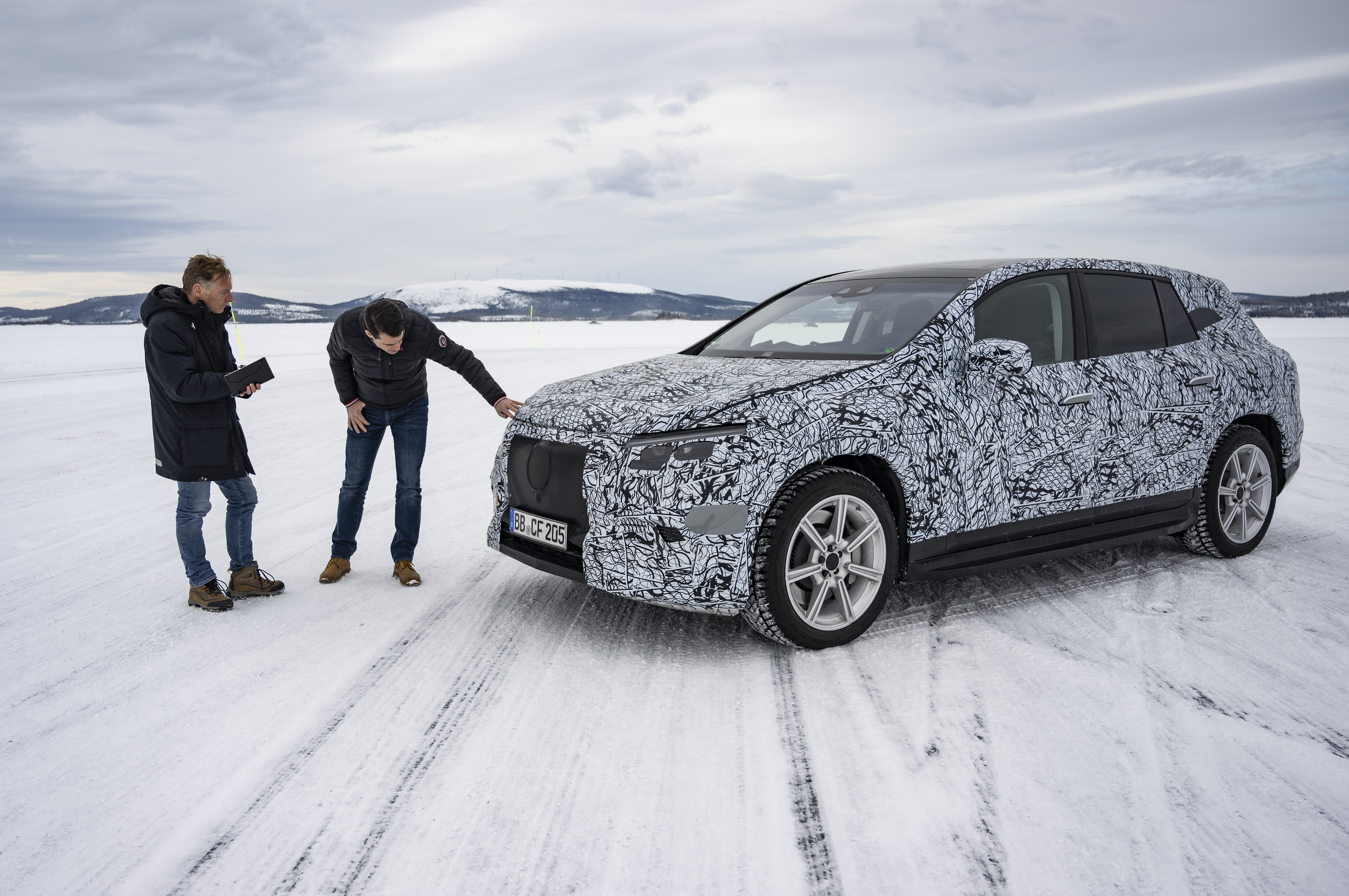 It is quite a climb into the cabin even though the door apertures, both front and rear, are generously dimensioned.  Once inside you find a luxurious interior that shares many of its design cues and upmarket materials with the EQS liftback and EQE sedan. The dashboard of the prototype features the integral Hyperscreen fascia with three individual displays, including one positioned in front of the passenger. It can be operated on the move but is immediately paused when an eye-detection monitor detects the driver’s attention is focused its way.

You sit 3.1 ins. (8 cm) higher than in the EQS liftback, with a commanding view forward. A high-set center console runs backwards through the cabin between the front seats. At the rear are two further rows of seats, providing the EQS SUV with room for up to seven; those at the rear are able to be folded down into the floor of the trunk via an electronic mechanism.

The EQS will offer up five different driveline combinations, including two from Mercedes-Benz’s AMG performance-car division.

The increase in output, says Enzmann, is to compensate for the increase in weight, which is expected to see the new Mercedes-Benz model tip the scales at close to 5,730 lbs. (2,599 Nm) in the guise shown here.

Electric energy is provided by a 107.8-kWh battery operating at up to 400V. It consists of three distinct modules and is housed within the floor, offering preconditioning properties and a charging rate of up to 200kW on a high-speed DC charger.

Predictably, it offers strong performance, even on the icy surface of Mercedes-Benz’s cold-weather testing facility. The EQS is silent off the mark, but also extremely urgent and terrifically smooth, too.

A determined stab of the throttle pins you back within the broad expanse of the driver’s seat as the generous torque reserves are deployed individually to each wheel via a single-speed gearbox and electronic all-wheel-drive system providing so-called Torque Split qualities for outstanding traction despite the icy conditions.

Nothing’s official at this stage, but we’d expect the EQS SUV to post a 0-62-mph (100-km/h) time of under 4.5 seconds in Sport – one of four different driving modes, including a dedicated off-road setting that will feature on both of Mercedes-Benz’s upcoming EQ-badged battery-electric SUVs. 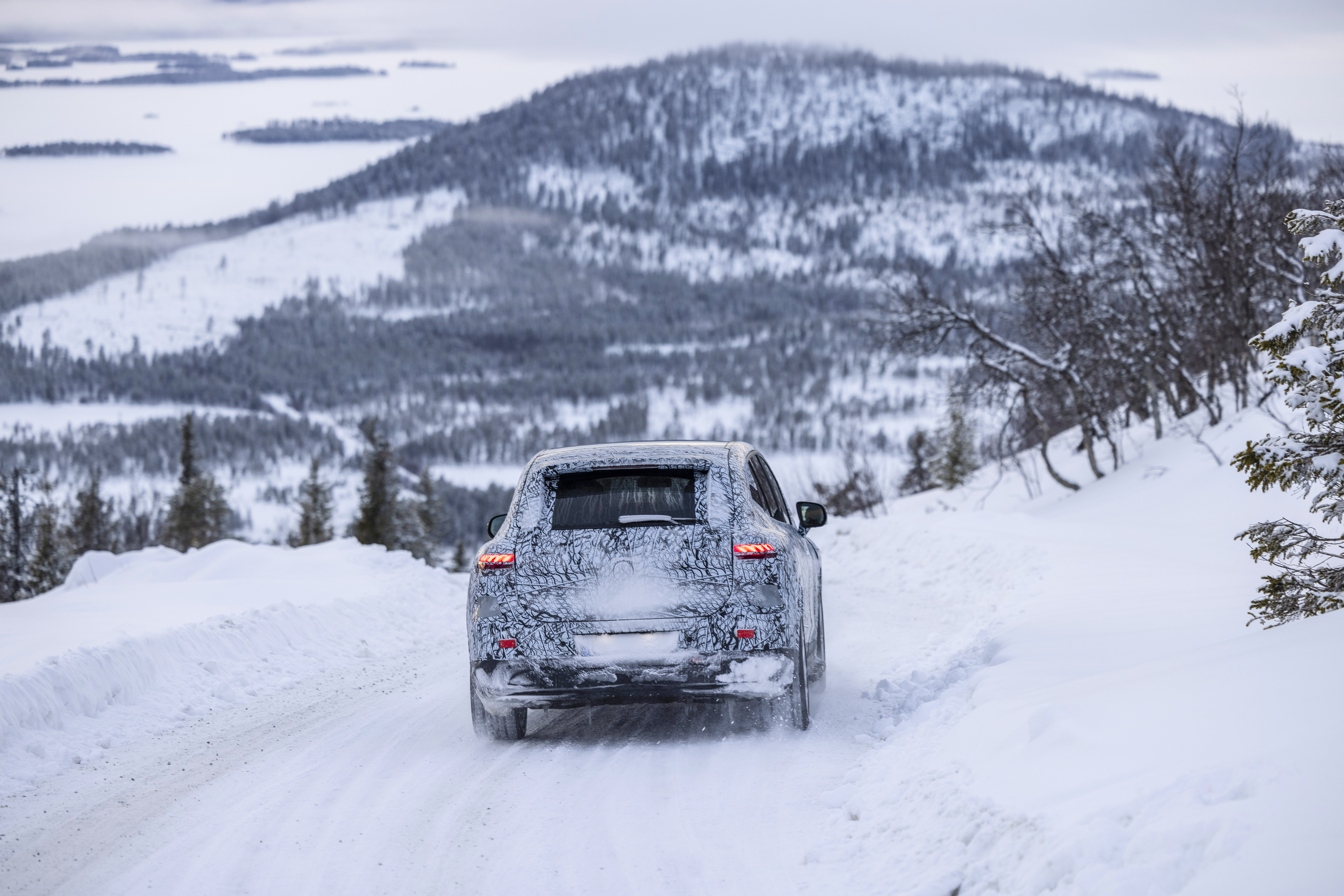 There is also solid roll-on acceleration; the EQS SUV gathered pace rapidly on the long snow-strewn straights of the Mercedes-Benz test track, displaying impressive stability similar to that of the EQS sedan despite its larger frontal area and greater ride height. There’s an underlying effortlessness to the overall operation that already establishes it as a clear rival to the likes of the BMW iX and Tesla Model X.

With its large battery mounted within its platform, the EQS SUV also corners in a lively manner, changing direction smartly and with great response for such a large vehicle with raised ride height and such a heavy battery. The steering is well judged, offering light and easy qualities at lower speeds along with greater heft and feel as the pace increases.

It remains collected when hustled down an icy handling road at speed with a full complement of passengers. The advanced air suspension allows a small degree of body roll but builds in a progressive manner and is ultimately well controlled.

You never lose the sense of its outright size and weight. However, brisk reactions and the ability of its various electronic systems to react quickly to any given driving situation endow the EQS SUV with dependable yet spirited handling traits. It feels very sure-footed and ultimately smaller than it is.

Interestingly, Mercedes-Benz has forgone electrically operated anti-roll bars to control body movement. Instead, it uses the air springs to provide resistance to lean, with two different levels of ride height depending on speed and driving mode.

One of the keys to its spirited handling is Mercedes-Benz’s Rear Axle Steering. As in the EQS liftback and EQE sedan, it generates up to 10 degrees of steering angle at the rear, contributing to all-round maneuverability and agility. It is the first time Mercedes-Benz has applied it to an SUV model.

It will be several months before we get to drive EQS SUV on public roads, but our brief encounter with a prototype of the new 7-seat model on the frozen surface of Mercedes-Benz’s winter testing facility has taught us that performance and dynamic finesse will be among its stronger attributes. Benefiting from the development already put into the EQS liftback and EQE sedans, it feels terrifically well-engineered.

And the range? With inferior aerodynamics, the EQS SUV is not expected to match equivalent EQS liftback models. Still, the EQS580 4Matic should be good for between 342 miles (550 km) and 373 miles (600km), hints Enzmann, citing further improvements in Mercedes-Benz’s brake-energy-recuperation system software.

Big, luxurious and highly sophisticated, the EQ flagship looks ready to leave its mark on the luxury BEV ranks. 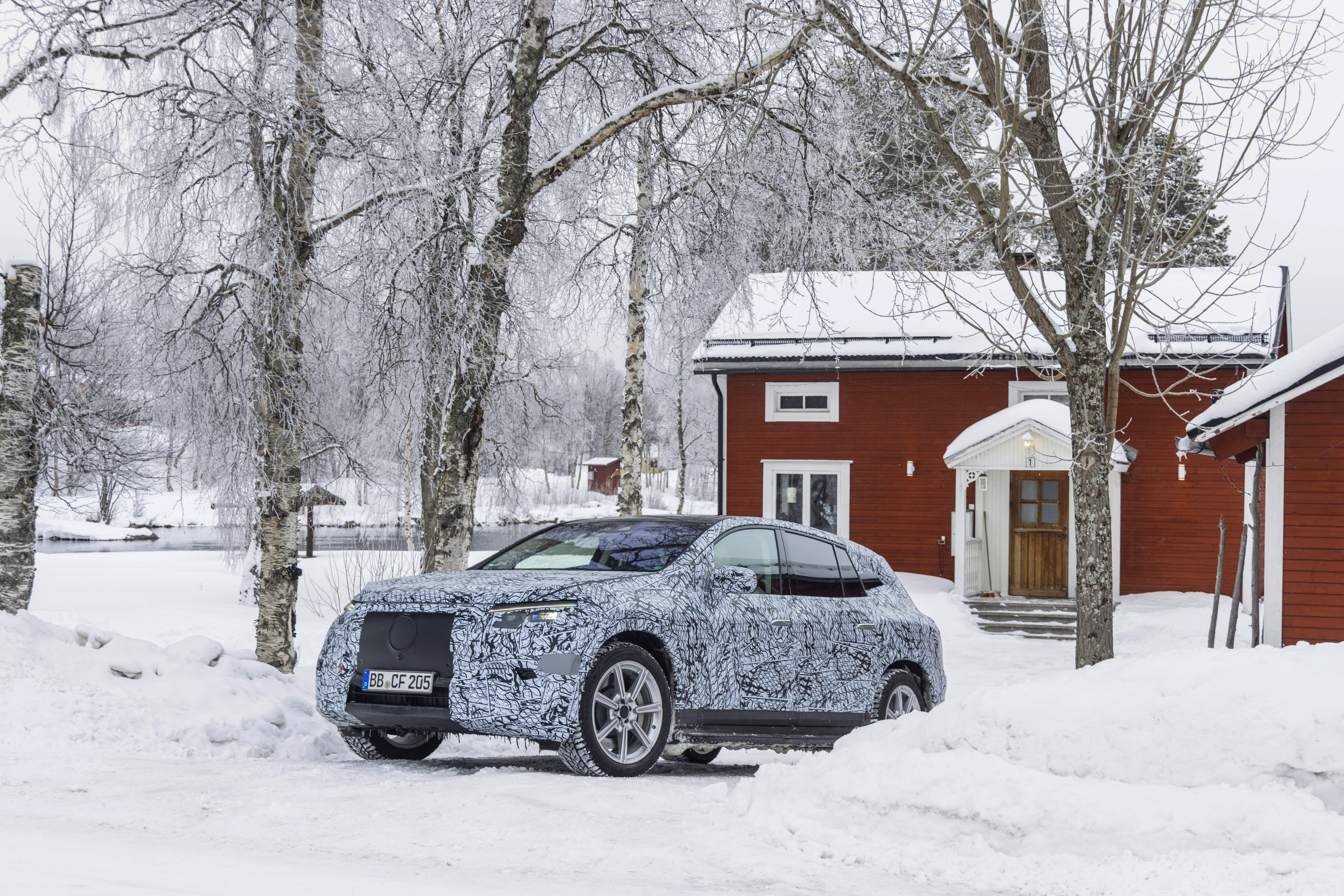