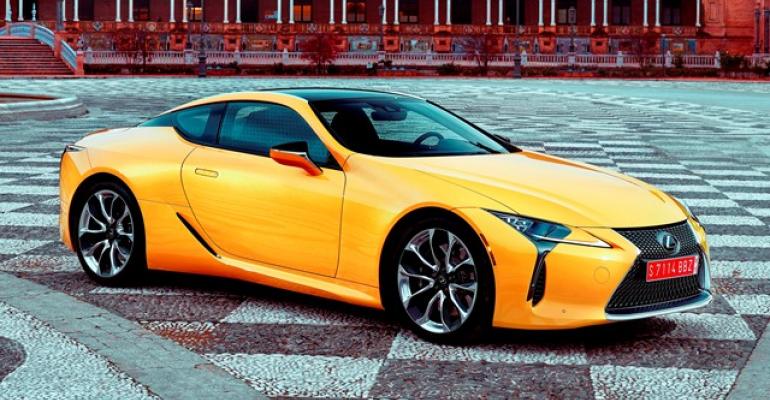 The hot as Hades road hugger, with hybrid efficiency, V-8 power and a seductive bright orange, blue and white interior, sets a new course for Lexus. If the LC can&rsquo;t redefine what makes a great Lexus &ndash; and what makes Lexus great &ndash; then nothing will.

SEVILLE, Spain – Nothing quite gets the blood pumping like a run-in with the policia, especially when the few words they know in English are “prison” and “jail.”

Thankfully, this altercation occurs at the end of a full day of driving, in rush-hour traffic a long way from the countryside (and racetrack) that witnessed speeds well beyond legal.

My documents were in order, but the officers were trying to shake us down for driving a prototype car with red license plates they deemed unacceptable. It all happened a few blocks from our hotel in this town that ironically served as the cradle of the Spanish Inquisition in the 15th century.

Lexus representatives sprinted to this downtown intersection teeming with pedestrians and tourists to argue with the officers that journalists have been driving these cars for two weeks – why the hassle at the end of the last day?

Lexus has a well-groomed image for its luxury cars, but it richly deserves some bad-boy mojo for launching the V-8-powered LC 500 and hybrid-electric LC 500h – a pair of 2+2 coupes that could catch the eye of Porsche 911 intenders. Lexus plans to sell about 400 units a month, with V-8 models making up 95% of the mix.

Going on sale in May in the U.S., this dramatically styled road hugger with up to 398 lb.-ft. (540 Nm) of torque and a seductive bright orange, blue and white interior sets a new course for Lexus. If the low-slung, hot as Hades LC can’t redefine what makes a great Lexus – and what makes Lexus great – then nothing will.

Inside and out, the car cries out to be ogled, from the short overhangs, flared haunches and narrow, angular wrap-around headlamps and taillamps to the deeply chiseled interior door trim, deployable rear wing and a windshield with about as much slope as a bunny hill.

It retains much of the pizzazz of the 2012 LF-LC concept car, which is exactly what top management wanted. The LC is so boldly styled that the angry trapezoidal grille, for which Lexus has been criticized mercilessly on more pedestrian vehicles, looks right at home.

Some might consider the LC to be overstyled, trying too hard to impress, even surpassing the styling language of the Lexus LFA, the brand’s first attempt at a supercar that saw production in Motomachi, Japan, of 500 units from 2010 to 2012. The new LC comes from the same plant.

But every brand needs a performance halo. Chevrolet has the Corvette. Dodge had (for a time) the Viper. Ford, the GT. Nissan, the GT-R. It’s about time Toyota’s luxury brand has one, too. (Let’s hope the Toyota brand also gets a halo, in a revived Supra.)

The powertrain offerings are a mix of old and new.

The 5.0L naturally aspirated V-8 in the LC 500 is rated at 471 hp and carries over from the RC F coupe and GS F sedan, both slightly less potent at 467 hp. With 16 fuel injectors, the V-8 employs both port- and direct injection, a distinctive Toyota approach dubbed D-4S.

The extra power comes from intake and exhaust tuning. Within the intake manifold, a secondary opening allows in more air at higher engine speeds, increasing airflow into the engine.

Lexus powertrain engineers are rightfully proud of the V-8’s rich exhaust note, enhanced by a resonator in the cabin piping in authentic induction sound – nothing electronically generated. The system is designed to let the occupants enjoy the engine hum without being overwhelmed by it.

The volume cranks up in Sport and Sport+ modes, and it sounds even better in late prototypes driven at wide-open throttle on Monteblanco Circuit, a private racetrack west of here in rural Andalusia.

Slightly more expensive (starting at $96,510) is a hybrid version, the LC 500h, which takes Toyota’s undisputed expertise in gasoline-electric powertrains to a new level of sophistication and performance.

The LC 500h represents the world premiere of Lexus’ Multi-Stage Hybrid system, which pairs Toyota’s corporate 3.5L V-6 (with port- and direct-injection) with two motor/generators and two transmissions – a 4-speed automatic and a continuously variable unit.

There is no dedicated starter in the hybrid, so motor generator 1 handles those duties and will restart the car at stoplights, where it will shut down if the lithium-ion battery pack has enough juice. (The LC 500h also happens to be the first production Lexus to use a lightweight Li-ion battery.)

Motor generator 1, by itself, will never turn the wheels. But it recharges the accessory battery, helps the CVT select gear ratios and produces electricity to drive motor generator 2.

In normal driving conditions, motor generator 2 will turn the wheels, so long as there is enough electricity in the Li-ion battery. If the driver needs more power, the gasoline V-6 will turn on immediately and begin working in tandem with the CVT (acting as a power-split device), the 4-speed automatic and both motor generators.

The meshing of the two transmissions, motor/generators and engine is an engineering marvel.

From a standstill, the hybrid launches in the first of the four mechanical gears in the 4-speed automatic, which is always engaged. At that point, the first mechanical gear works in tandem with three additional gear ratios as selected by the CVT. The same thing happens with the second mechanical gear to achieve gears four, five and six with the CVT. Likewise, the third mechanical gear yields gears seven, eight and nine.

The car has been accelerating all this time and now is approaching maximum speed – pegged at 155 mph (250 km/h) – so 10th gear is a combination of one CVT virtual gear with the fourth mechanical gear for overdrive.

Along the way, no matter if “normal,” “eco” or “sport” mode is selected, the driver is hard pressed to tell which transmission is shifting or that there is so much powertrain intelligence at play. The hybrid will coast at speeds up to 87 mph (140 km/h).

But Lexus boasts the LC 500h is the first hybrid that can spin its wheels on dry pavement, a claim independently confirmed. It’s billed as a grand tourer and truly delivers.

Not bad for a car with total output of 354 hp. Enabling the V-6 to switch seamlessly between Otto and fuel-saving Atkinson combustion cycles surely helps efficiency. It’s worth noting the Multi-Stage Hybrid system can be scaled down for a lower-priced vehicle with a smaller engine.

The LC is the first Lexus springing from the all-new global architecture for rear-wheel-drive luxury cars (GA-L), which also underpins the new fifth-generation ’18 Lexus LS flagship. The sedan was unveiled at Detroit’s North American International Auto Show in January and arrives this fall.

Expect this platform beneath a number of future vehicles, as it was developed to meet global crash regulations for the next 10 years, a Lexus engineer says.

While the LS is a front-engine model, the LC is considered front-midship because the powertrain center of gravity is 3.5 ins. (90 mm) behind the front axle, improving handling by keeping the nose lighter.

The chassis is a grab-bag of innovative materials: steel, high-tensile steel, carbon-fiber reinforced plastic and aluminum, joined by laser welding, laser screw welding, adhesives and rivets, augmented by a series of braces to form honeycomb structures for extra rigidity.

Doors, front fenders and the hood are aluminum. Available is a carbon-fiber roof panel (in place of standard fixed glass), and carbon sheet-molding compound (another material borrowed from the LFA) is used for the trunklid and door innards.

Nevertheless, the car handles well and responds quickly and progressively to steering inputs. Available rear-steering makes the car more nimble by turning the rear wheels up to 2 degrees in the same direction at high speeds (in freeway lane changes, for instance) or in the opposite direction in tight maneuvers.

The LC’s interior is magnificent, and the hybrid’s cabin is just as sharp as that of the V-8. The predictable shades of black and beige are available, but the colors that best fit the coupe’s persona are Rioja Red and Bespoke White.

Exclusive to LC, Bespoke White will shock traditional Lexus shoppers. Vivid orange door panels and the shift lever surround contrast with a bold blue steering wheel, instrument panel and center armrest. The artistically sculptured (and supremely comfortable) white seats rest like a dollop of whipped cream on top. It took two years and 50 trial prototype seats to come up with the ideal one.

Takumi craftsmen get credit for the extreme attention to detail, hand-stitching the steering wheel, gearshift lever and achieving the grooved “draping” effect of the Alcantara door trim.

Lexus customers will find the controls easily understood and within reach. Designers incorporated switches for stability control and mode selection into two stalks that protrude like the bolts of Frankenstein’s neck from either side of the brow covering the instrument cluster. Despite their awkward appearance, the controls are intuitive.

So how was my quarrel with the policia resolved? An English-speaking officer eventually arrived and gave me a stern warning to drive straight to the hotel (just around the corner) and park the car – or risk having it confiscated.

I did as told, but the unfortunate incident could not erase my fond memories behind the wheel.