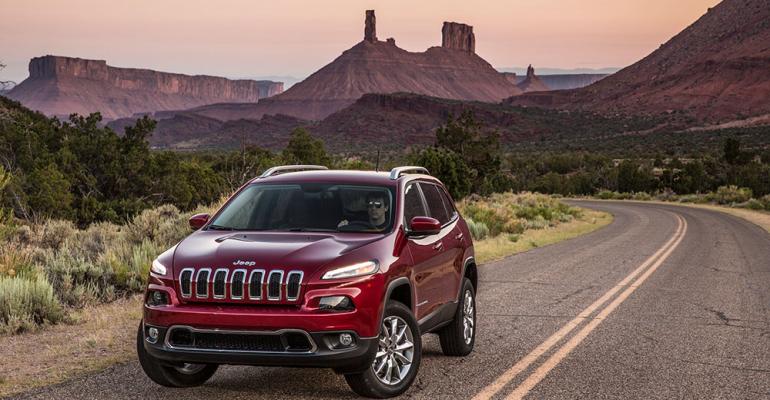 The avant-garde exterior styling may have some doing a double-take, but behind the wheel there’s no mistaking Chrysler’s new Cherokee for anything but a Jeep.

And that’s a good thing.

The ’14 Cherokee, which replaces the Liberty in the brand’s U.S. lineup, has Jeep DNA through and through, which means it stands a good chance of carving out its own niche in the increasingly crowded Middle CUV segment, which now has some 22 entries and counting.

It also means the Cherokee might not be for everyone.

We drove the trail-rated Trailhawk model equipped with Chrysler’s newest Pentastar V-6, a 3.2L listed at 271 hp and 239 lb.-ft. (316 Nm) of torque, in daily commutes around Detroit as part of our 2014 Ward’s 10 Best Engines evaluation.

Also onboard is the all-new ZF-engineered 9-speed automatic, which hiccupped the vehicle’s market launch for several weeks as engineers scrambled to rewrite the transmission’s software to smooth performance.

Chalk it up as problem solved, if our tester is any indication. Although the Trailhawk is decidedly skewed toward off-roading, our test routes don’t take us off the beaten path. But in all matters of on-road driving at least, the Cherokee never lacks for power, and shifts – in some cases big jumps down from 8th to 4th gear during hard acceleration – mostly are smooth. The 9-speed does hunt around somewhat at normal cruising speeds, but it’s nothing that would be considered a deal-breaker.

Fuel economy is vastly improved from what we remember getting in the outgoing Liberty (Chrysler says its 30% better), and the 19.8 mpg (11.9 L/100 km) we averaged here with a number of drivers in various commutes totaling more than 300 miles (483 km) appears competitive with other V-6s in the segment, and could even be a slight difference maker for comparison shoppers.

Either way, having a V-6 available at all is a clear advantage, with prime competitors such as the Honda CR-V, Toyota RAV4, Ford Escape and Subaru Forester offering only 4-cyl. engines.

Ride, at least in this Trailhawk version with its 17-in. wheels and all-terrain Firestone Destination A/T tires, leans more toward the Wrangler than Grand Cherokee. That may turn off buyers who intend only to cruise suburbia, not tackle the Rubicon, but it also is part of what infuses the new model with its Jeep DNA.

Even though it’s not quite up to Grand Cherokee’s high standards, the lower-priced Cherokee still is remarkably good for its segment when it comes to keeping its cabin quiet. Rear-seat room is ample, and the 60/40 split bench reclines and can move a few inches fore and aft to either expand cargo room or maximize passenger comfort.

But what may be the Cherokee’s most appealing facet is its macho design. Neither a CR-V nor RAV4 – or many others in the segment for that matter – will want to be trapped in a dark alley with the Jeep. This thing just screams aggressive.

And while many may have been taken aback by the new exterior design when Chrysler first unveiled it, the Cherokee’s styling begins to grow on you after a while. With its oversized, menacing grille and squinty front lamps, the midsize CUV looks as if it is ready for a long stare-down, almost daring you to call it a “cute-ute.”

There’s a rugged feel inside as well, despite all the amenities afforded by the Trailhawk package, which starts at $29,495 (a $6,500 jump from the base model) and includes the 9-speed automatic, Active Drive Lock all-wheel-drive (one of three AWD systems offered), Chrysler’s Uconnect system and leather-wrapped steering wheel.

The cabin’s centerpiece is Chrysler’s now ubiquitous 8.4-in. (21.3-cm) touchscreen (standard on the Trailhawk) that controls radio and climate functions, and in this case offers navigation.

It is among the best in the business, providing large graphics that are easy to access, even while driving. A voice-activation system means the touchscreen can be bypassed if desired. Two USB ports, audio jack and SD card slot add to the possibilities for the entertainment system.

All in all, the new Cherokee stands out in its segment as a true off-roader with some pretty good on-road manners as well. Those seeking a midsize ute that’s not so cute may find what they’re looking for in the newest Jeep.