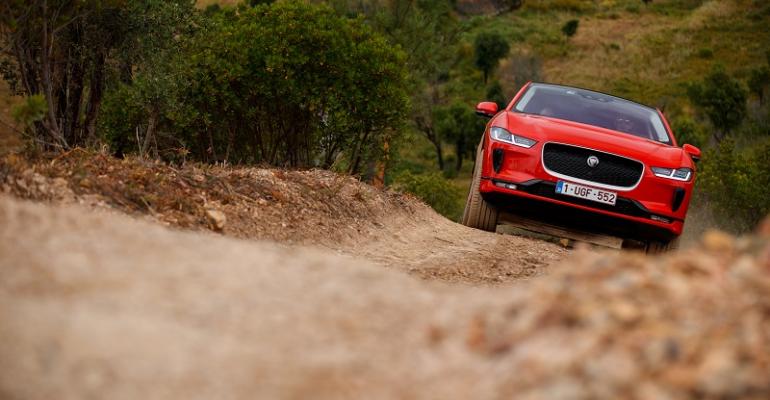 The I-Pace is dumbfounding, too, for how a relatively tiny U.K. engineering outfit could deliver the goods ahead of R&D juggernauts in Germany, Japan and, especially, Detroit.

The ’19 Jaguar I-Pace easily is the best, if not the least expensive, fully electric vehicle on the market. Priced from $69,500 before government incentives, the 5-passenger CUV is an indulgence of British luxury and a shrieking tomcat of a performance car.

Models tested here were First Edition units costing about $17,400 more for their exclusivity. Additonal trim levels include the base S model, SE and HSE.

The I-Pace is dumbfounding, too, for how a relatively tiny U.K. engineering outfit could deliver the goods ahead of R&D Goliaths in Germany, Japan and, especially, Detroit. That’s looking at you, Cadillac and Lincoln: Make one of these babies and you wouldn’t have to lean so hard on marketing glitz to elevate your brands.

The I-Pace puts Jaguar instantly, and for its rivals enviably, in the company of Tesla, which despite its manufacturing pratfalls and automated-driving woes remains among the top three most reputable companies in America. The world loves a startup, and Jaguar more resembles one every day.

But unlike Tesla EVs, the I-Pace can be purchased from any neighborhood Jaguar dealership. In fact, availability to the brand’s 200 North American stores is under way after $1.5 billion worth of renovations to accommodate new models such as the I-Pace. Dealership personnel also have undergone training to sell and service the EV, which is the first of many electrified Jaguars coming.

Talk about getting out of the gates quickly, too. The first electric vehicle from Jaguar proves its mettle time and again during an extensive test drive here, where it silently drifts through the narrow, cobblestone streets of sleepy seaside villages; takes down mountainous switchbacks with the confidence of a much smaller sports car; claws up potted, off-camber trails like an SUV; and displays some old-fashion Jaguar racing grit on the track.

Hell, the tightly sealed I-Pace isn’t even afraid of water. It boasts a wading depth of 19.7 ins. (500 mm), which was more than enough for an extended splash here through a roadside stream. How’s that for an electric cat?

Speaking of electricity, there’s enough here to light FC Porto’s home stadium. The guts of the I-Pace is a 90-kWh lithium-ion battery with nickel manganese cobalt chemistry making 388V and tipping the scales at 1,329 lbs. (603 kg). It is sourced from LG Chem.

That big battery, which powers a pair of permanent magnet synchronous motors linked to front and rear drive axles, means loads of instant power. The all-wheel-drive system puts out 512 lb.-ft. (694 Nm) of torque, evenly split fore and aft with the capability to variably distribute twist. The drive unit comes from American Axle, built to Jaguar specifications. The propulsion system generates instantaneous and seemingly endless EV torque to create smiles for miles. Dip into the throttle at highway speeds and the I-Pace eagerly passes slower-moving traffic. It darts through roundabouts and from a standstill launches like, well, a leaping cat. Hard throttle returns a pleasant, albeit synthetic growl.

Adjust the regenerative braking to its highest degree and the I-Pace practically brakes itself with one-pedal driving. Traffic jams never have been so painless.

The sizable battery comprising the floor of the I-Pace between its axles combines with the low-fitted motors for 50-50 weight distribution, which gives the I-Pace outstanding balance. It also pushes the curb weight to more than 4,000 lbs. (1,814 kg), so the car feels as stout as a Chevy Tahoe, while a stiff aluminum architecture buttons the car up nicely.

But the weight also betrays. The I-Pace is not nimble, evidenced by a few laps around the Algarve International Circuit, a track known locally as the Portimao Circuit. The 2.9-mile (4.7 km) loop with 14 highly technical turns reveals understeer, which was heightened by a couple warmup laps in an awesomely adept rear-wheel-drive Jaguar F-Type.

At the same time, few owners will ever track their I-Pace, so the heft hardly is a deal breaker.

There was a curious electrical snafu plaguing some cars. Jaguar officials say it is a simple software update that was not performed on some units used in the drive, and it never happened to any of our three separate testers but two others stalled along the route. The fix was to effectively reboot the car after seven minutes. It sounds more dramatic than it was, but important to note nonetheless.

In fact, the more controversial element of the car might be its styling. The absence of an internal-combustion engine permits a distinct cab-forward design, as well as a nifty front boot to complement lots of rear storage, but it may not be everyone’s cup of tea.

The rear end also appears chopped off. It was done to improve aerodynamics, and I-Pace styling chief Wayne Burgess says Jaguar wanted the car as slippery as possible (0.29 Cd) to improve its range to a confidence-inspiring 240 miles (386 km). For our money it creates an awfully abrupt end to an otherwise beautifully flowing profile.

There is not a lot of rearward visibility, either. A standard backup camera helps, but it is odd to look through the rearview mirror to a window no larger than the queen’s hat, which ironically it closely resembles. The interior is downright delectable. Its highlight is a center stack, which for good reason Jaguar calls the flight deck. It is a handsomely styled command center housing items such as the gear selector, driving modes and multi-function HVAC controls that are easy to use. An HD display helps passengers navigate climate controls.

A more traditional, but brilliantly vibrant, infotainment screen wrappd in polished nickel trim, an execution seen throughout the cabin, serves as the gateway to items such as audio, navigation, apps and the I-Pace battery-management system. The system utilizes artificial intelligence to learn driver preferences to tailor the experience accordingly.

An available 4G Wi-Fi hotspot for up to eight devices worked seamlessly over two days of test drives. There are six USB ports and three 12V sockets. The I-Pace marks the first vehicle from Jaguar with the capability for over-the-air updates to keep content fresh throughout the ownership period. A remote app for smartphones allows owners access to key vehicle features and set charging preferences.

Racing-inspired seats are comfortable and supportive, while the artsy steering wheel could hang on a wall and there is a lot of room to move in both the front and rear. However, there are a couple hard surfaces unkind to your elbows and it is unimaginable why the I-Pace, an electric car, would not have inductive phone charging. There are discreet cubbies in the rear to safely stow devices.

With a combination of first-class trappings, good looks and go-anywhere performance, the car would be a winner regardless of its propulsion. But adding zero-emissions makes the I-Pace a giant killer.