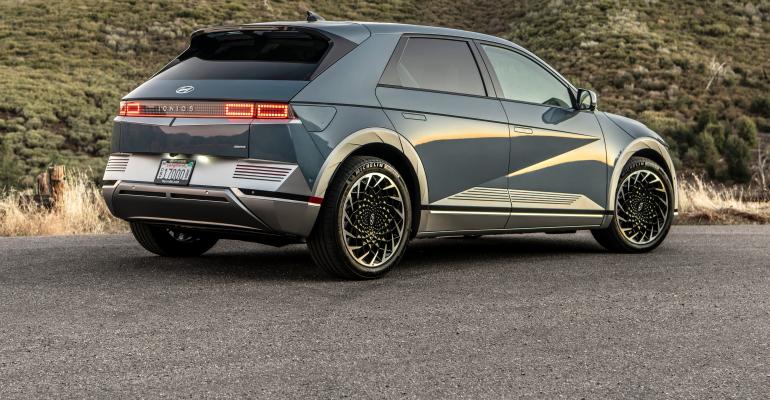 Hyundai’s new Ioniq 5 immediately becomes a top contender in the crowded BEV CUV space given its outstanding range and performance.

Now Hyundai’s launching an even more impressively spec’d BEV, the Ioniq 5. Unlike the existing Ioniq, this new model is a CUV, and built on a dedicated platform, Hyundai’s new E-GMP (Electric-Global Modular Platform) that will underpin more BEVs, including a larger CUV and sedan recently shown at the L.A. auto show, plus a slew of BEVs from sister-brand Kia.

The Ioniq 5 (pictured below, left) has better range than the Kona Electric: 303 miles (488 km) for the 225-hp rear-wheel-drive model. That’s one of the longest ranges yet in a BEV from a legacy automaker, and on par with certain Teslas. 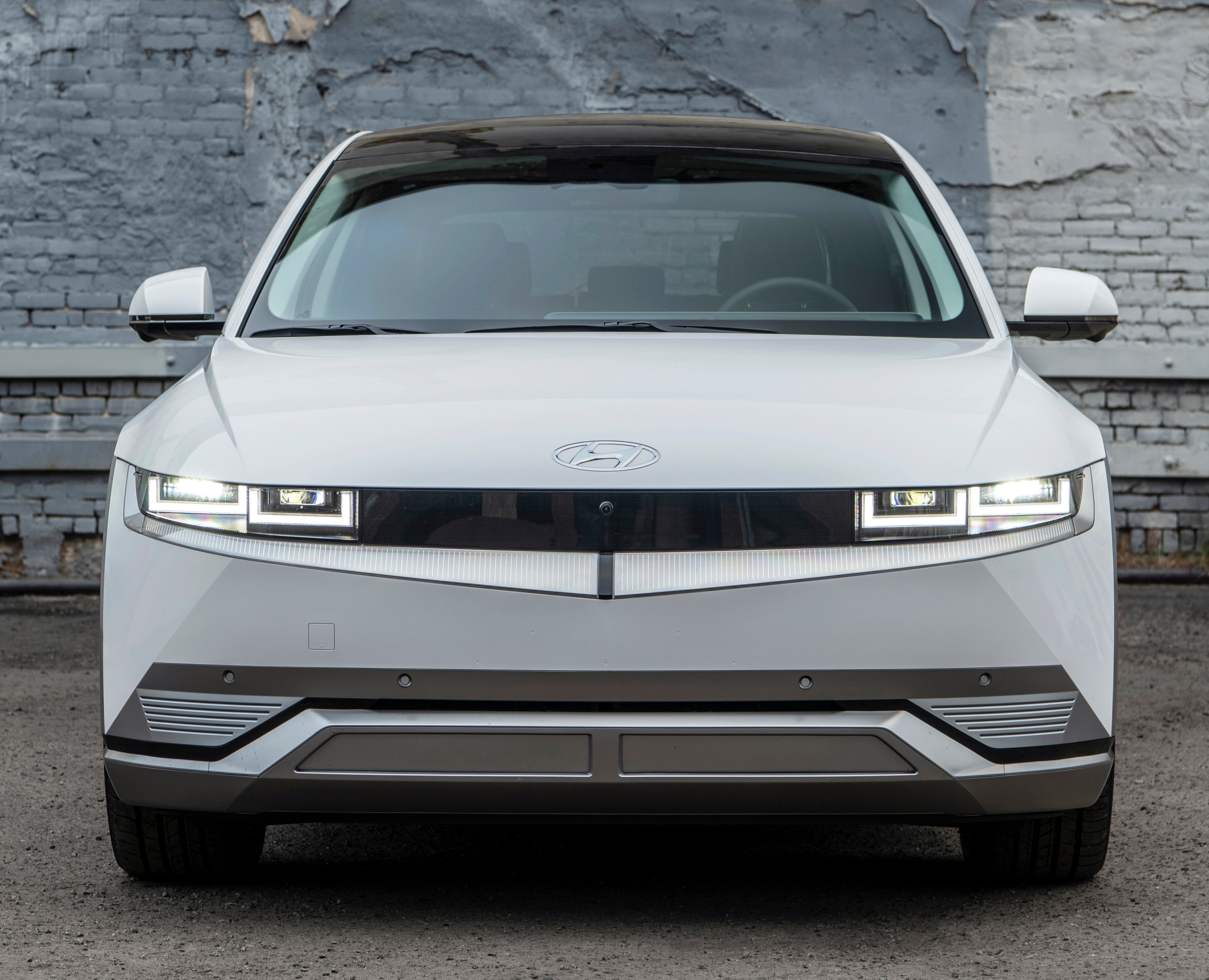 But the biggest draw may be its ability to juice up quickly on the newest-generation ultra-fast chargers, thanks to its 800V electrical architecture standard across all grades. Hyundai is touting just 18 minutes to take the lithium-ion battery pack from 10% to 80% full on a 350-kW charger.

We are impressed after spending a day in an Ioniq 5 320-hp dual-motor all-wheel-drive model (with 256 miles [412 km] of range), but there are drawbacks.

BEV range is dependent on weather and driving style, but despite some aggressive maneuvers on a cold, rainy day we use just 47 miles (76 km) of range covering 44 miles (71 km) on our first leg. An eager accelerator combined with our test vehicle’s massive 446-lb.-ft. (605-Nm) of torque from a standstill – and the twists of CA-79 from San Diego to Julian – squashes our desire to hyper-mile. We do partake on a later leg, traveling 36 miles (58 km) but using just 23 miles (37 km) of range, achieving 5.4 miles/kWh.

The Ioniq 5 has three drive modes to suit your mood: Normal, Eco and Sport. Compared with ICE models with these modes, the difference between them in this BEV is more obvious, transforming the vehicle’s personality.

In Sport mode, acceleration is blistering from low speeds. Unsurprisingly, the always-aggressive Hyundai is considering ratcheting up the vehicle’s performance credentials even more with a sport or N variant.

In Normal drive mode, the Ioniq 5’s acceleration leans more riotous than subdued, while Eco firms up the accelerator so it’s not easy to compress – far too restrictive for the driving we want to do that day, but nevertheless a nice feature if you want to retain range in dense suburban driving. One reason to use Eco: we observe a 5-mile (8-km) bump in range by going into the mode. In comparison, we lose 5 miles of range switching from Normal to Sport. 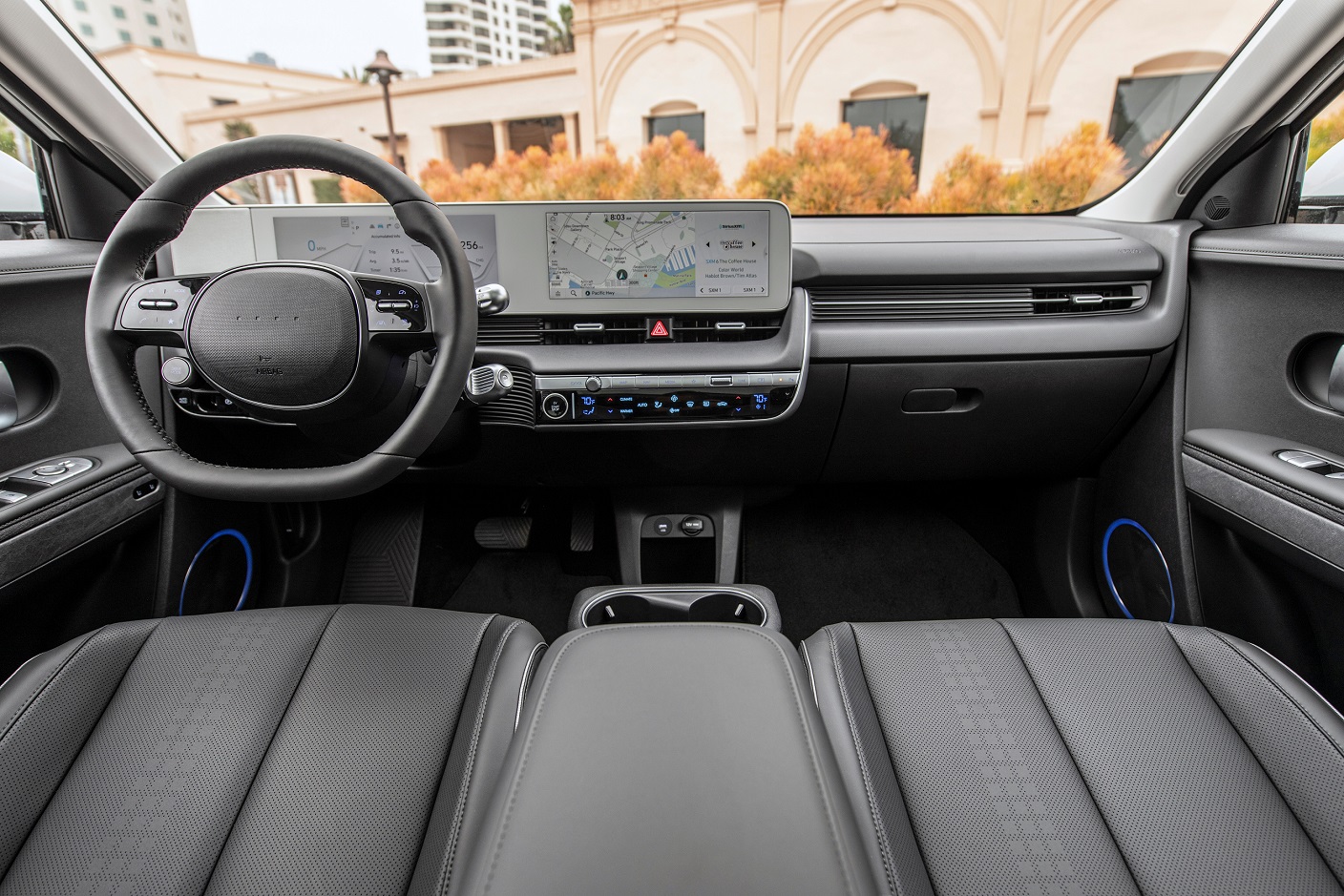 Our tester, with MacPherson-strut front and multilink rear suspensions, handles well and corners tightly in Sport mode on the sharpest curves of CA-79.

But our time behind the wheel is marred by intrusive advanced-driver-assist-system technology.

The lane-centering feature, when on, firmly torques the wheel, so much so that we fight the vehicle for control. Thankfully it’s easy to turn off via a steering-wheel-mounted push button.

The automatic lane change feature is a mixed bag, needing in our experience more intervention than a mere turn indicator (i.e. you need to nudge the wheel), but then it’s hands off, planting us between the lines in the next lane over.

However, the smart (a.k.a. adaptive) cruise control performs well on a busy I-805 in late afternoon, keeping pace with traffic ahead and braking us naturally. Hyundai says machine learning helps SCC mimic a driver’s acceleration style.

The infotainment system is easy to use, with a familiar Hyundai main menu, albeit on a brighter background and with quicker response time to inputs than in other Hyundais. Cluster-screen graphics neatly convey information about driving style, such as a bar that grows bluer with a lead foot. 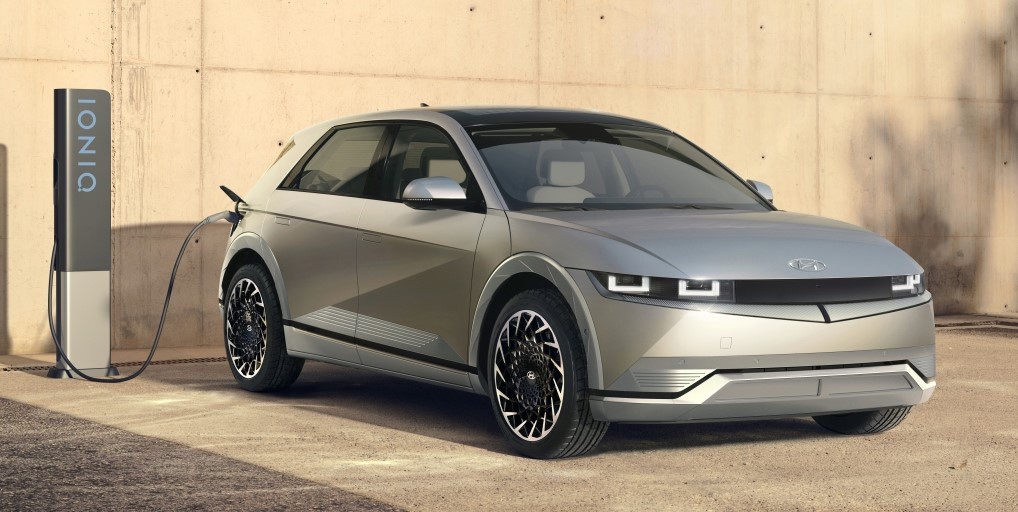 Interior materials are low-gloss and attractive, although largely gray and black. Color comes from ambient lighting, including around speaker grates on doors.

Interior comfort is high with plenty of legroom front and back. A feature from the minivan segment, the center console slides rearward. It can act as a table for backseat passengers who may want to rest their laptop on it. There’s a 115V outlet back there to power devices.

Speaking of powering devices, you can draw on the Ioniq 5’s battery pack to power a variety of things, like a compressor to inflate an air mattress while camping, by purchasing an adapter that plugs into the charge port.

Kudos to Hyundai for not watering down too much its design concept, but, if we have any reservation about the Ioniq 5, it feels and looks like other BEV CUVs. It’s becoming difficult to distinguish an Ioniq 5 from a Model Y from a Volkswagen ID.4, etc.

Not helping matters is every OEM is mimicking Tesla’s barren, futuristic style. Hyundai takes minimalism to a new level in that the Ioniq 5’s steering wheel has no Hyundai logo – just four small square pixels. While they echo pixels throughout the exterior and interior, the lack of a logo on the steering wheel, as well as no jazzy startup animation – as in the Ford Mustang Mach-E – make this feel anonymous.

Without an exhaust tone, pedestrian noise is one way OEMs can distinguish their BEVs, but the Ioniq 5’s hovering spaceship hum sounds a lot like other BEVs. How about some Mozart or Motley Crue instead, sound engineers? 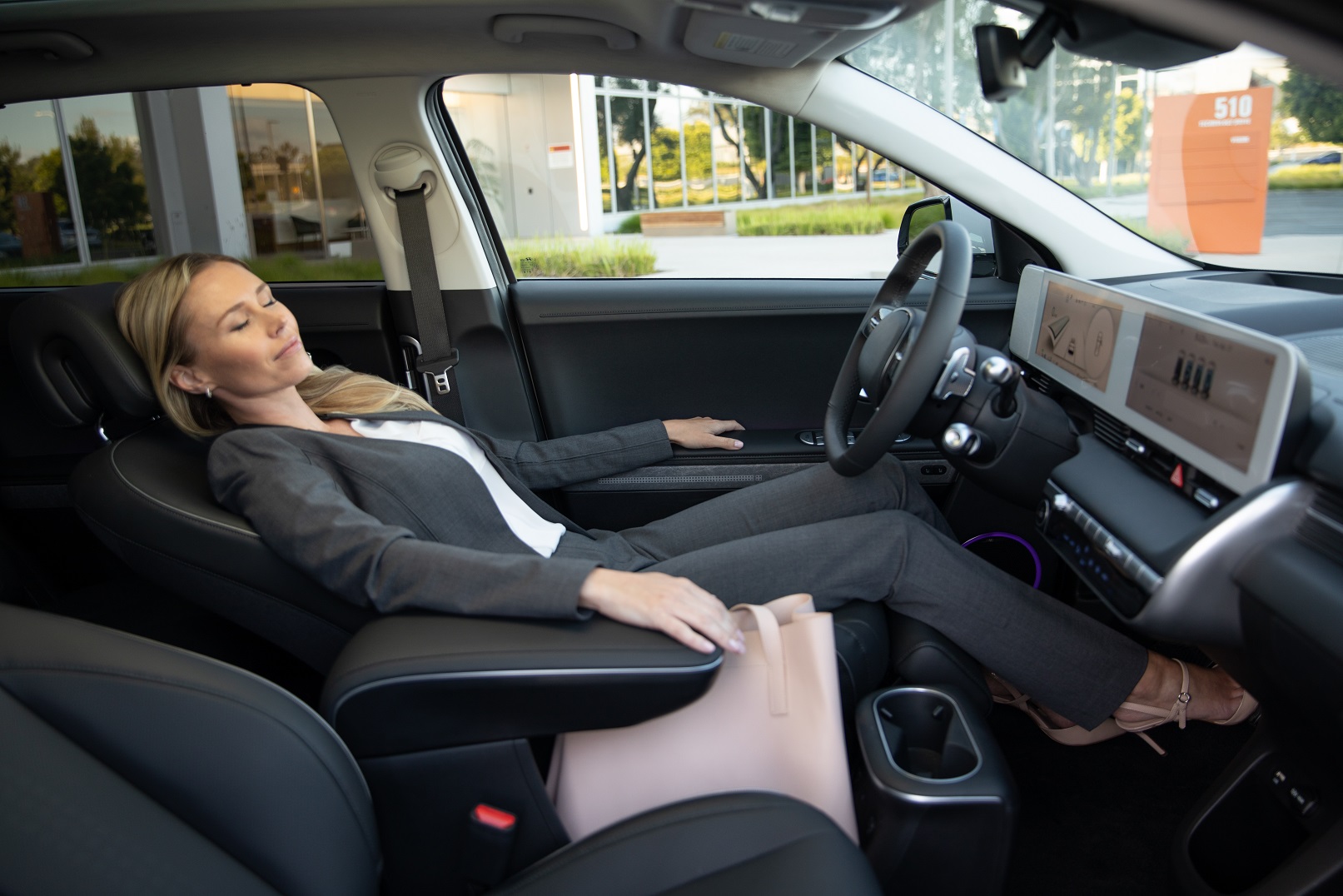 Overall though, we think this, on range alone, will be a tough contender.

It took 15 minutes to take our battery from 44% to 80% on one of EA’s new 350-kW DC fast chargers used here, with a maximum observed speed of 132 kW -- below the 235-kW maximum speed the Ioniq can accept. The discrepancy could be an issue with the charging equipment, the local grid or the Ioniq's battery management system. Some other reviewers reportedly got close to 235 kW in their test vehicles while using the same station's chargers.

The Ioniq 5 starts at $39,700 for a 168-hp base model with a 220-mile (354-km) range and hits $54,500 for an AWD Limited. it is assembled in Korea and just going on sale in the U.S. Initial units will go to dealers in states following California’s strict zero-emission-vehicle rules, Hyundai says. 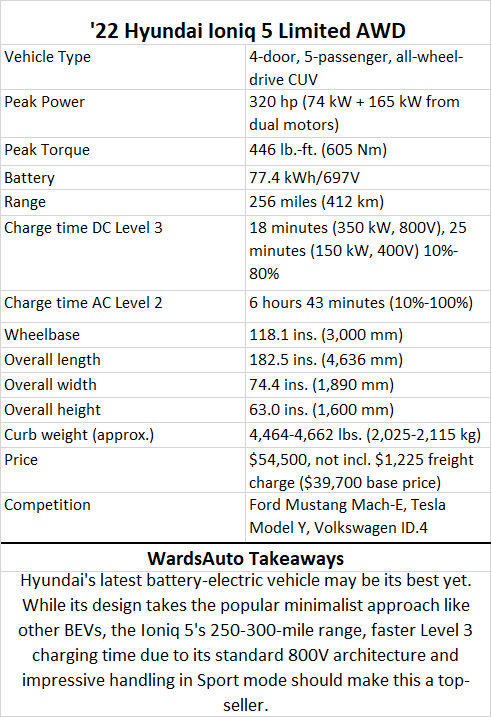