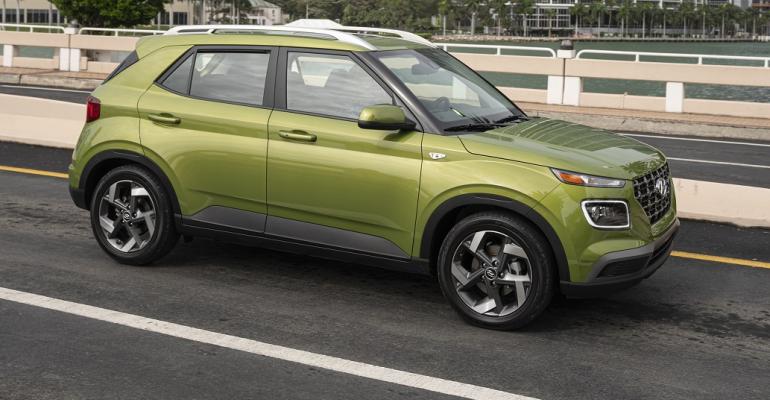 In typical Hyundai fashion, the Venue subcompact CUV is a screaming deal, roughly priced between $17,000 and $23,000 and filled with class-above elements like oodles of standard safety tech.

Many of the group’s top-selling models in 2019, such as the Jeep Compass and Hyundai’s own Tucson, are either compact, riding on C-platforms, or they use B-platforms but are on the large side of small, such as the Buick Encore, Chevy Trax, Mazda CX-3 and CX-30, Honda HR-V and Toyota C-HR.

However, Hyundai thinks there’s room (and tolerance among Americans) for models that are truly B-size and just this month has begun retailing its Venue model in the U.S. 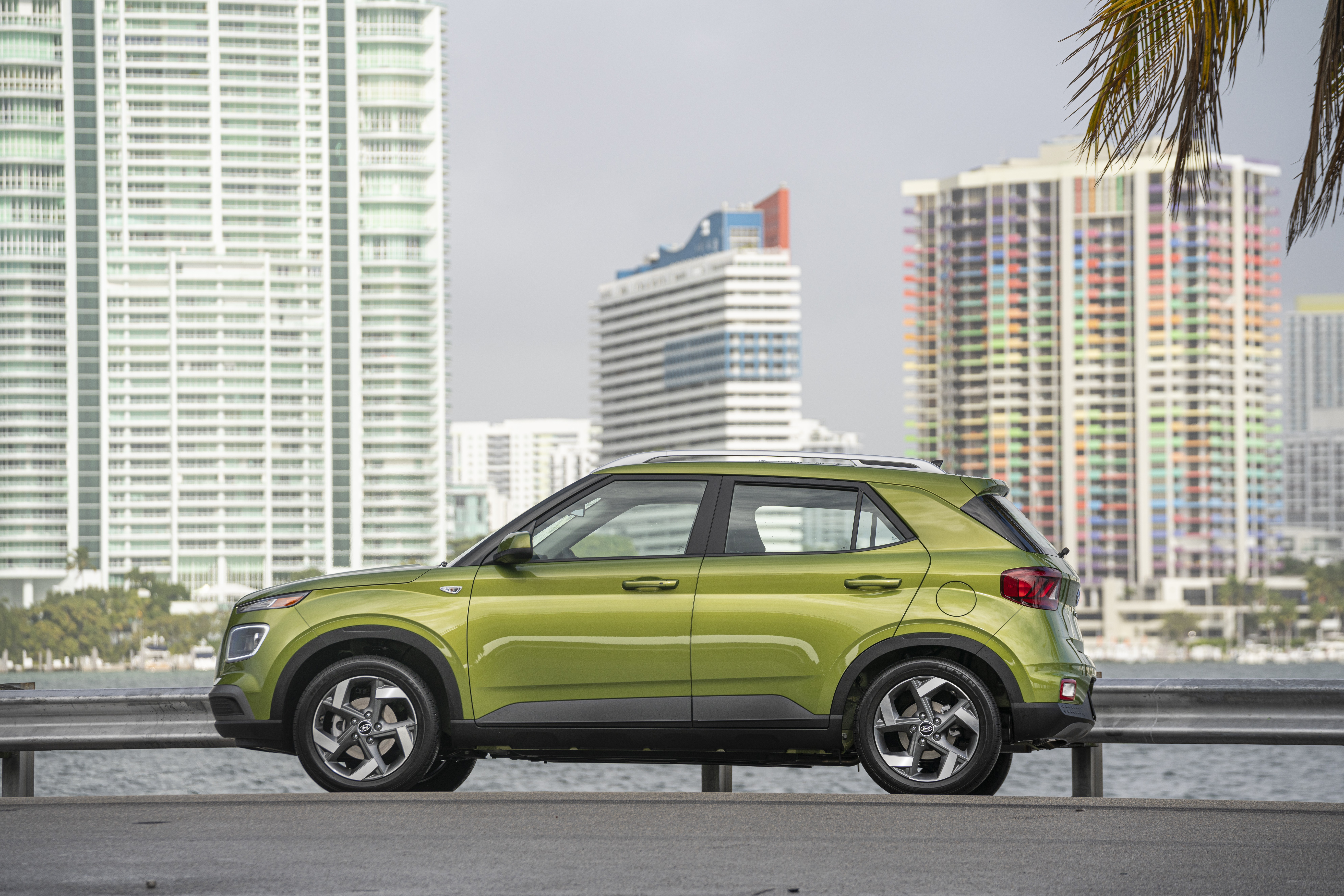 If those dimensions turn you off, the price may change your mind: $17,350 to start, well below the $20,000-plus starting prices of most of the competition.

Yes, in typical Hyundai fashion, the Venue is a screaming deal. Even the top-grade Denim Edition we spend the day in here is just $23,180 (including $1,095 freight and handling charge). To refresh your memory, the average transaction price for a new vehicle in the U.S. is over $36,000.

While there definitely are some elements that let you know you’re in bargain transportation, Hyundai as usual includes some surprising up-level features.

Standard on even the base SE grade with a 6-speed manual transmission (Hyundai’s intelligent variable transmission is additional $1,200) is remote keyless entry, an 8-in. (20-cm) infotainment touchscreen with Android Auto and Apple CarPlay, power windows and door locks, Bluetooth, audio steering-wheel controls and automatic headlights with high-beam assist. There’s also a slew of standard ADAS (advanced-driver-assist system) technologies including lane-keep assist, driver attention warning and forward collision avoidance assist with pedestrian detection. As required by law for new vehicles in the U.S., all Venues also have a rearview camera.

Moving up to an SEL mid grade ($19,250) with Hyundai’s intelligent variable transmission nets buyers disc brakes and alloy wheels, plus drive modes, dual USB charge ports in the front and a center console with an armrest.

The Denim Edition we drive here adds a blue exterior and interior color and a white roof and contains most of the content from the SEL option packages, such as a leather-wrapped steering wheel, blindspot collision warning with rear-cross-traffic alert, LED headlights and taillights, heated front seats and side mirrors, and an 8-in. touchscreen with navigation and SiriusXM.

The engine churns out 121 hp and 113 lb.-ft. (153 Nm), enough to motivate the relatively small vehicle quietly on lower-speed city streets with heavy traffic.

We try out Normal and Sport modes and come away preferring the former. Using Sport produces higher engine revs and a raucous clamor during cruising on less-congested Key Biscayne. Switching back to Normal immediately kicks us up a gear and quells the racket.

Because it’s a small, naturally aspirated engine with a high torque peak (4,500 rpm), any aggressive throttle inputs, no matter your selected drive mode will result in audible engine noise. But, at a price point below $25,000, you can’t expect perfection in terms of NVH.

The Venue’s transmission is an IVT, not a CVT, because it uses a chain belt, not a push belt, and has a wide-ratio pulley system, which Hyundai claims helps improve efficiency and fuel economy. Fake “shifts” seem to occur at expected intervals. Hyundai says its Shift Control Strategy makes for better linearity between acceleration and driver inputs, lessening the dreaded rubber-band feel CVTs can exhibit.

The ride quality is good, at least on Miami’s relatively pothole-free streets. The CUV has a MacPherson-strut front suspension but a torsion-beam rear axle. However, twin-tube shock absorbers are used in front and back to limit any large or small inputs. Road noise is prominent here, due to the worn nature of roadways. On smoother streets it thankfully fades.

The Venue’s interior is reasonable for the price point, with flourishes that disguise or distract attention from cheaper elements. For instance, the instrument panel is hard plastic, not soft-touch, but it has an attractive dimpled texture (not a typical faux-leather grain), done in a dark-blue hue in our Denim Edition tester, to give a class-above appearance.

The cloth on our Denim Edition’s seats, surrounded by a blue faux leather with white piping, indeed looks like denim but has some white horizontal and diagonal lines (see pic below) for added style. 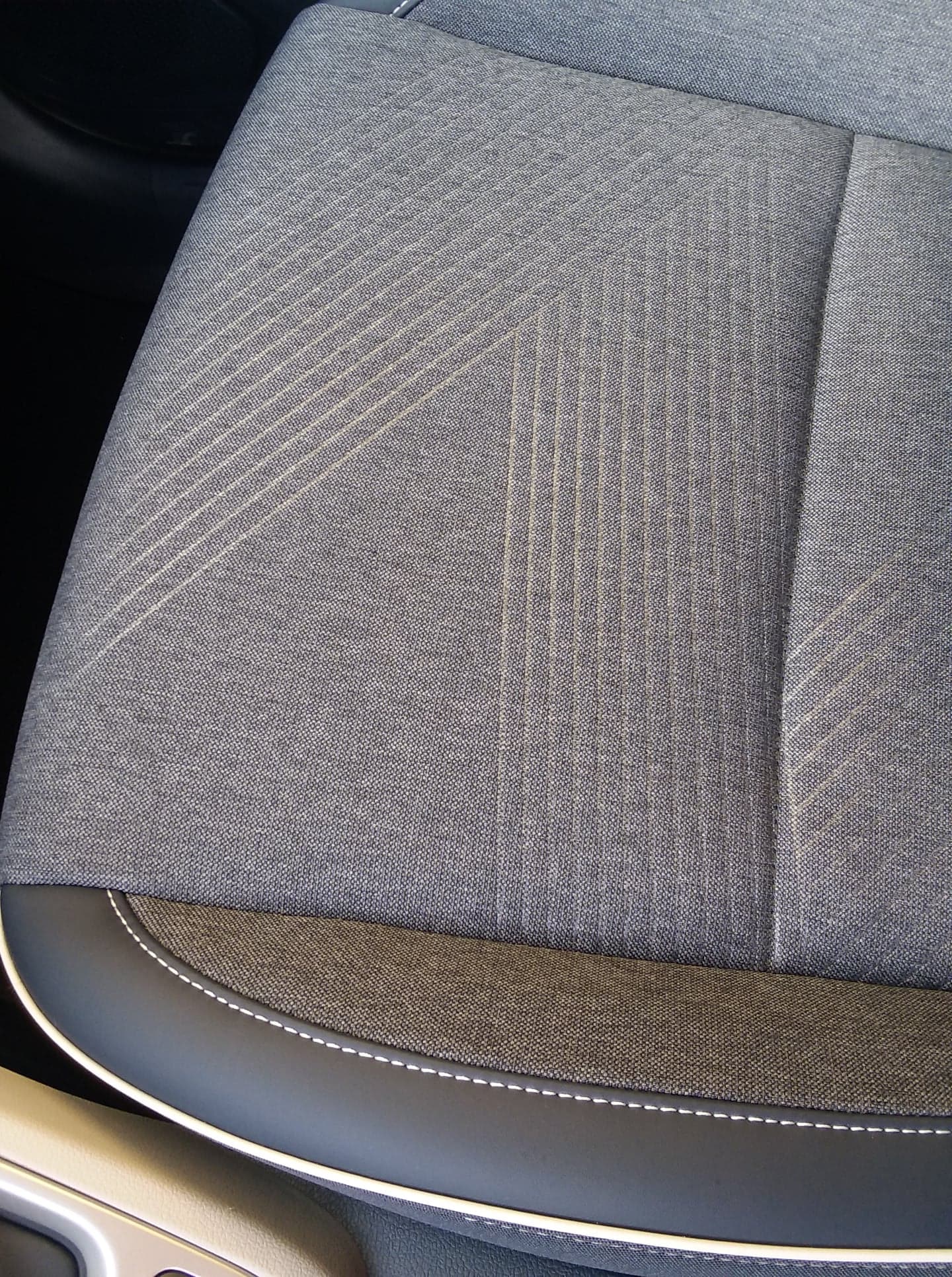 Door trim is almost entirely hard plastic, and in a faux-leather texture, but a beefy armrest is wrapped in an ivory vinyl with tonal stitching to dress things up.

Given Hyundai wants the vehicle to appeal to younger buyers, who have lived their whole lives in front of screens, the standard 8-in. touchscreen is a no-brainer and rare to find in a vehicle below $20,000.

We’ve been fans of Hyundai’s menu structure and the relative ease of deciphering and accessing infotainment features, but a lot of time spent using the in-vehicle navigation system to map our way around Miami brings up a user-experience issue: the decreasing distance bar that shows how close you are to an intended turn is small. What’s more, it’s placed on the edge of the split-screen maps, making it difficult for our eyes to quickly zero in on it. Making that bar bigger and moving it away from the edge of the zoomed-in map would make recognition easier and get a driver’s eyes back on the road quicker.

Our complaints, again given the price point, are few, but we do find the lack of a USB port for rear-seat passengers disappointing. There isn’t one in the console box either, so if a passenger seated in the back wants to charge their phone, they better have a long cord to reach the front ports at the base of the center stack.

We have scant experience using the Venue’s ADAS technologies, although a few times lane-keep assist springs to life and nudges us back into our lane when we slightly drift near the line, fortunately in a non-annoying manner.

The small CUV’s packaging and features, plus good powertrain and fuel economy, make it hard to envision a scenario where the automaker doesn’t sell a healthy number of these.

Because of its small size, the Venue likely won’t surpass six figures in sales as has the Tucson, or tally the 73,000 Konas sold last year in the U.S., but volume of at least 50,000 a year is likely given the subcompact’s status as a crossover, Hyundai’s low pricing and the relative lack of competition below $20,000.

The ’20 Hyundai Venue, assembled in Ulsan, South Korea, is on sale now at U.S. Hyundai dealers. 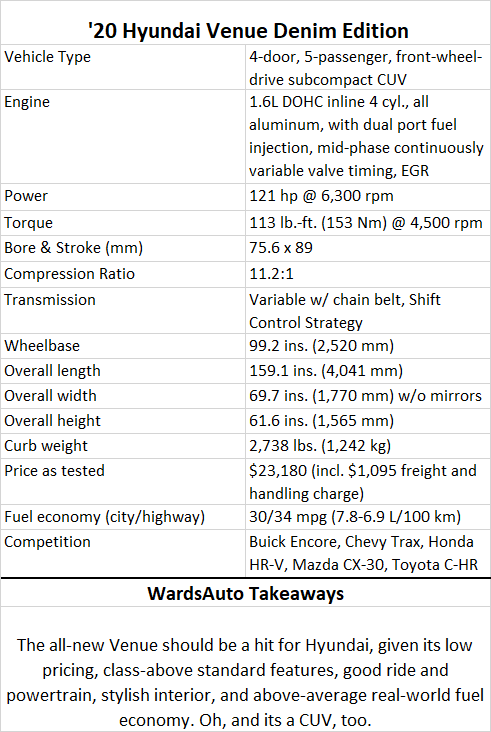