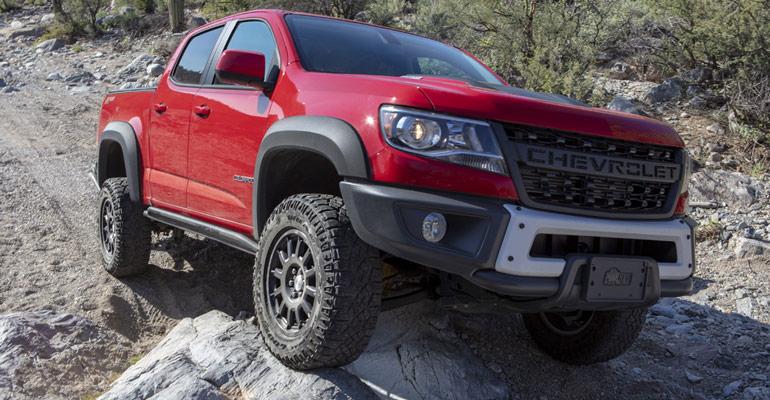 If there’s a message in the hubris of its blacked-out grille emblazoned with large “Chevrolet” script in all caps, cold steel bumpers and 31-in. off-road tires it is this: Get in or get out of the way.

TONTO NATIONAL FOREST TRAILHEAD, AZ – The ’19 Chevrolet Colorado ZR2 Bison is hardly modest, but when you’re crawling over boulders the size of Cadillacs it is no time for humility.

The ZR2 Bison, an even beefier version of the Colorado ZR2 rock-jumper released last year, is an over-the-top, go-anywhere, in-your-face midsize pickup. If there’s a message in the hubris of its blacked-out grille emblazoned with large “Chevrolet” script in all caps, cold steel bumpers and 31-in. off-road tires it is this: Get in or get out of the way.

The genesis of Chevy’s first collaboration with American Expedition Vehicles, a Wixom, MI-based manufacturer of off-road parts and accessories supplier known mostly for its work with the Jeep Wrangler, the ZR2 Bison is as capable in the wild as its namesake.

AEV also penned the truck’s stamped-steel front and rear bumpers, which contain provisions for a winch and standard fog lamps. Recovery points – should they ever be needed – are integrated into the rear bumper.

Sophisticated damping technology carries over from the standard Colorado ZR2. Supplied by Markham, ON, Canada-based Multimatic, the Dynamic Suspension Spool Valve technology appears on a number of high-profile motorsports programs and a few years back General Motors added it to the ’14 Chevy Camaro Z/28.

DSSV uses some clever valve work inside the aluminum damper housing to provide precise ride and handling whatever the conditions. In an off-road situation it gives drivers confidence to push the truck to the limits of its capabilities and sprinting along gravel roads here laden with chatter bumps the ZR2 Bison’s nose stays pointed straight ahead.

Additional details include Bison decals on the cargo-bed sides, as well as an AEV Bison logo for the tailgate, floor liners and front head restraints.

And like Colorado ZR2, the ZR2 Bison receives a rear track 3.5 ins. (89 mm) wider than a base Colorado and a 3.42 axle ratio for additional low-speed torque. An AEV-designed snorkel for wading and enhanced filtration is available exclusively to the ZR2 Bison.

Out on the trail here, a ZR2 Bison outfitted with GM’s workhorse 3.6L V-6 and an 8-speed automatic transmission feels unstoppable as we tackle a seemingly impassable rock formation. 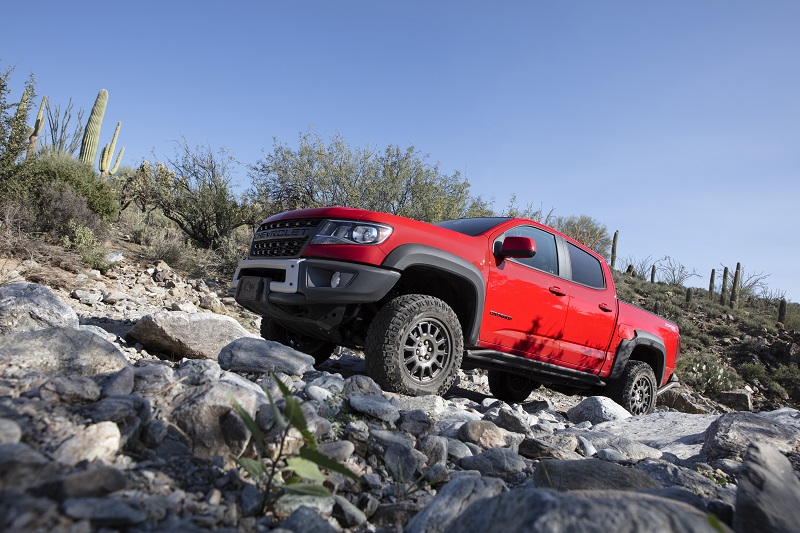 With a little coaching from spotters, the ZR2 Bison crawls over big boulders and walks up craggy rock stairs with the Eaton-sourced front and rear lockers providing cloven-hoof traction. But unlike the Colorado ZR2, when this truck descends off a rock with the startling crash of steel meeting earth it is encouraging to know the underbody is protected by a veritable force field. The only damage our Safari saw was to aluminum exhaust pipes that probably would need to be re-routed for hardcore off-roaders.

As outrageous as the ZR2 Bison may seem on paper and despite just fractional sales within the Colorado line, the truck plays an important role. It gives the Colorado a bit of late-game momentum as it enters its fifth model year. In fact, the biggest drawback to the ZR2 Bison is a dated interior.

The ZR2 Bison also serves as an answer to Fiat Chrysler’s Jeep brand, which is the cash-earning envy of industry rivals. Out of the gate, GM sees the ZR2 competing with the Jeep Wrangler Unlimited Rubicon at a few hundred dollars discount (the ZR2 Bison is a $5,750 premium to the Colorado ZR2). The ZR2 Bison’s head-to-head competition comes in the second quarter of next year with the arrival of the ’20 Jeep Gladiator pickup, which has not been priced yet.

The ZR2 Bison is built for a narrow, discerning group of off-roaders. But with a full factory warranty behind the truck, as well as the utility of a cargo bed, the ZR2 Bison piggybacks the Chevy brand deeper into new territory. 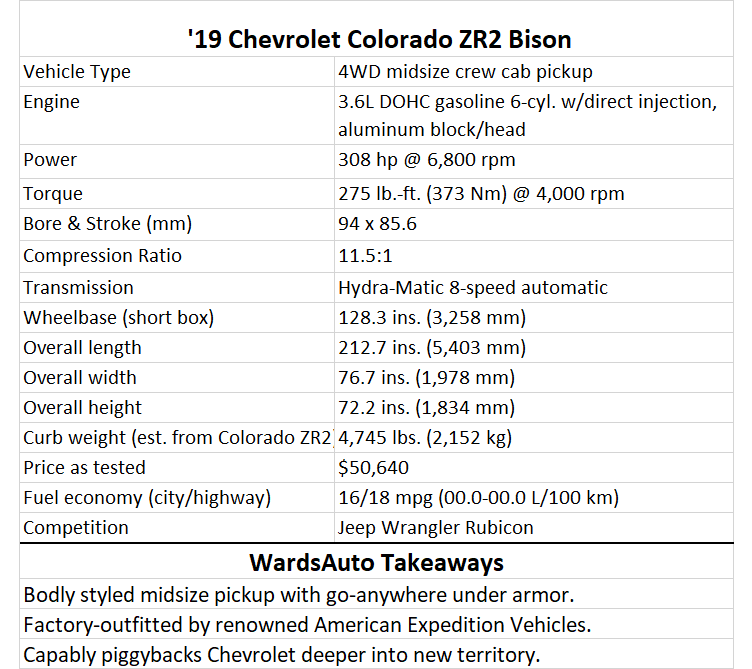