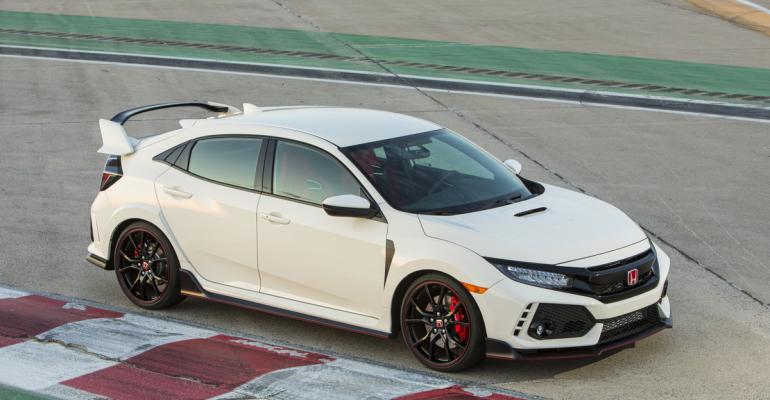 The 5-door Civic Type R hatchback comes with a red-hot interior, a boy-racer wing that adds 66 lbs. of downforce, an aggressively tuned suspension, sticky tires and a throaty 3-way exhaust. With 306 hp, it&rsquo;s the most powerful Honda ever sold in the U.S.

SEATTLE – We all know the story of the Honda Civic: Reliable, affordable, sensible, fuel-efficient, its luster marred by a half-hearted ’12 model-year redesign that was fixed three years later with a masterful roof-to-rubber do-over. Until November, it was America’s best-selling passenger car.

Now in its 10th generation, the Civic adds a completely new (and long overdue) dimension to its legacy – one that will catch off-guard even the Civic Si loyalists who craved more power, more track-ability. If Subaru could have the STI and Mitsubishi the (dearly departed) EVO, then why shouldn’t Honda customers have something equally lust-worthy, the thinking went.

Satisfaction comes in the 5-door Civic Type R hatchback, now available in U.S. showrooms with a red-hot interior (literally, the only color available), a boy-racer wing that adds 66 lbs. (30 kg) of downforce, an aggressively tuned suspension, sticky tires and a throaty 3-way exhaust.

And don’t forget the 306-hp 2.0L turbo-4 that propels the ’18 Type R on its way like a pinball – purposeful and momentarily straight, but ready for whatever careening good times lie ahead. It’s the most powerful Honda ever sold in the U.S.

This is the first time the Civic Type R has been available to Americans, although five previous generations of the hot hatch have been offered in other markets, beginning in 1997.

Most impressive about this new package is the stability with which 295 lb.-ft. (400 Nm) of twist is transmitted to the pavement under the front wheels with so little torque steer, thanks to active dampers and a slick dual-axis strut front suspension design.

With boost pressure of 22.8 psi (1.6 bar) and weighing in at only 3,117 lbs. (1,414 kg), the Type R by all rights should be bucking like an angry bronco. Instead, the car tracks predictably as intended and actually is a perfectly good daily driver, especially in comfort mode.

Honda has made all manner of enthralling 4-cyl. engines in vehicles such as the Prelude, S2000 roadster and Acura RSX, but all those powerplants were naturally aspirated, which required steady caning at high rpm to ring out the full potential. That high-revving formula was alluring to many but could be hard on the ears.

The new Type R uses single-scroll turbocharging to solve that quandary. Peak torque comes as early as 2,500 rpm, virtually eliminating turbo lag. This engine’s sweet spot is around 4,000 rpm, revving happily and always willing to slam up against the 7,000-rpm redline.

There’s only one transmission available in the Type R – a short-throw 6-speed manual – and S2000 lovers will enjoy the standard rev-matching feature by switching to third at 80 mph (129 km/h) while on the highway, just for old times’ sake. Even then, this all-aluminum 4-pot assembled in Anna, OH, will respond in kind, without excessive buzzing or vibration.

In “+R” track mode, rev matching is always on. When not on the track, the system can be shut off. This is the first time the Type R has been offered with rev matching. A water-cooled oil cooler in the transmission helps keep operating temperatures down.

Premium fuel is recommended, but the Type R will run on regular as well. European customers able to find 98-octane will see 315 hp, Honda promises. With low-octane unleaded, the engine will produce about 290 hp.

The redesigned Honda Accord uses a similar all-new 252-hp 2.0L turbo-4 with lower boost pressure, different connecting rods and a different turbocharger. That engine also is in the hunt for 2018 Wards 10 Best Engines.

The Type R’s intercooled, twin-cam 4-cyl. achieves an impressive specific output of 153 hp per liter by combining variable cam timing on the intake and exhaust sides with a revised version of Honda’s VTEC variable valve lift.

On earlier naturally aspirated Honda engines, VTEC provided additional valve lift by switching to a different cam lobe at high rpm. A sharp ear could detect when that shift occurred and the valves would stay open longer, delivering a surge of power.

The execution is slightly different in the new turbocharged engine, which deploys VTEC only on the exhaust valves. Instead of doing its job at high rpm, the updated system operates at lower engine speeds, opening the exhaust valves wider to dump more exhaust into the turbocharger to spool it up more quickly – a simple but effective anti-lag device.

The low-inertia turbocharger uses an electric wastegate, which also helps it spin faster. In-cylinder temperatures stay low with the help of oil jets to cool the pistons, which makes for cleaner combustion and more power.

The turbocharger is bolted to the two-piece exhaust manifold, which is water-cooled to help dissipate heat from the turbocharger. The lightweight forged steel connecting rods help reduce rotating inertia, allowing the engine to respond more quickly to throttle inputs.

A lightweight single-mass flywheel spins up faster than the heavier dual-mass flywheel used on the previous Type R. An air scoop on the hood routes more air above the engine, then down along the firewall, helping cool the engine bay and prevent a certain degree of lift.

The drive-by-wire throttle tuning makes the car more responsive and controllable, coupled with a helical limited slip differential that is mechanical rather than brake-actuated.

Below the rear bumper is an odd site for a sports car, literally: three exhaust pipes, rather than two or four. It’s a purely mechanical system – no fancy flaps. One center pipe carries exhaust from the engine through the catalyst to the rear, where it forks into three paths feeding three resonators behind the rear axle.

Once exhaust starts flowing faster, the main center resonator fills up and the excess air begins feeding the two larger outboard resonators. At high rpm, the exhaust note is as throaty as a lightweight muscle car should be, but the rest of the time the sound is subdued, enhancing daily drivability.

Inside, the Type R is dramatic, bright and bold. Unlike Hondas geared for a mainstream audience, this cabin is charcoal and bordello red, which seems fitting based on how the aggressively bolstered microsuede seats hold one’s backside, even during track flogging.

The red accents are everywhere – on the instrument panel, doors, steering wheel and shifter boot – and punctuated with carbon-fiber-like trim pieces. The gauges also glow in bright crimson, especially at startup, when yellow lights flash in sequence, like a drag strip “Christmas tree.”

In the center of the steering wheel (as well as on the grille, liftgate and the 20-in. alloy rims) is something American customers have never seen: a red Honda logo. Only the Type R has sported this red badge (overseas, of course), although counterfeiters have been known to shop them on the aftermarket.

It’s kind of a big deal that Civic buyers in the U.S. – accustomed to generations of sedans and coupes – have access to a hatchback at all. Once the automaker decided its new global Civic platform would be used for every 2-door, 4-door and 5-door body style in every part of the world, the U.S. product planners made it known the Type R needed to reach American shores.

When the decision was made final, internal celebrations ensued as the U.S. team looked forward to the hatchback. First came the standard model (with a 1.5L turbo-4), which went on sale in September 2016. Year-to-date, about 20% of Civic buyers have opted for the hatchback.

It’s been more than 15 years since Honda offered a Civic hatch in the U.S., and the automaker is convinced the new offering is attracting a younger audience for the car.

The Type R, manufactured in Swindon, U.K., comes along at a higher price point ($33,900, about $10,000 more than a less-potent Civic Si), but it will add incrementally to the sales tally. By the end of this year, Honda expects to sell about 2,500 Type R hatchbacks and to double that number in 2018.