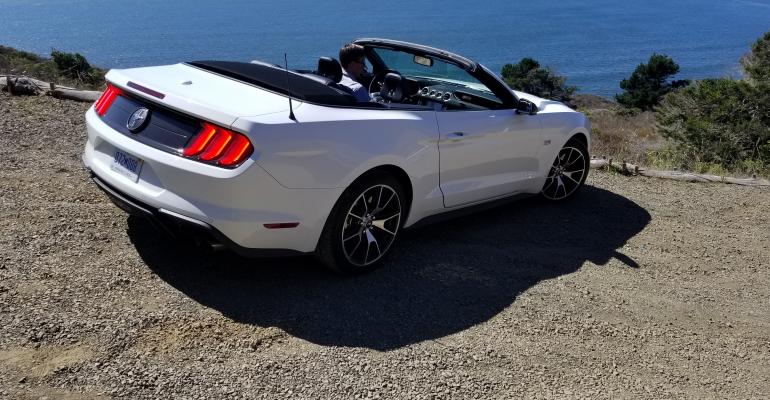 Acceleration with the new EcoBoost engine is linear, and it feels much more stout than the base 310-hp 2.3L, which tends to run out of breath at high rpm. On paper, these two engines are separated by 22 hp, but it feels like so much more.

SAUSALITO, CA – When Ford took the bold step in 2015 of introducing a turbocharged 2.3L EcoBoost 4-cyl. in its iconic Mustang, few people would have predicted that engine would make up the majority of sales four years later.

Those percentages are about to change again, and not solely because Ford is about to launch an all-new 760-hp 5.2L supercharged V-8 in the GT500 that will be priced too high to compete in the 2020 Wards 10 Best Engines & Propulsion Systems competition. Vehicle base price is capped at $65,000 this year.

No, the ’20 Mustang will have another powertrain offering: a 332-hp High Performance version of the 2.3L EcoBoost 4-cyl. that was the heart and soul of the short-lived Ford Focus RS hot hatchback. In the front-wheel-drive Focus, the engine was placed transversely and adapted for all-wheel drive.

In the rear-drive Mustang, that EcoBoost I-4 runs north-south under the hood, so accessory drives and engine mounts have been adapted. But the bore, stroke, compression ratio, valvetrain and nearly all the hardware carry over directly from the Focus RS to the new Mustang application.

The biggest changes for the engine – beyond tuning and calibration – come in the redesigned quad-tip exhaust system and in an all-new turbocharger with low backpressure that makes 22 psi (1.5-bar) of boost with a twin-scroll compressor that is 5% larger than the one used for the Focus RS. 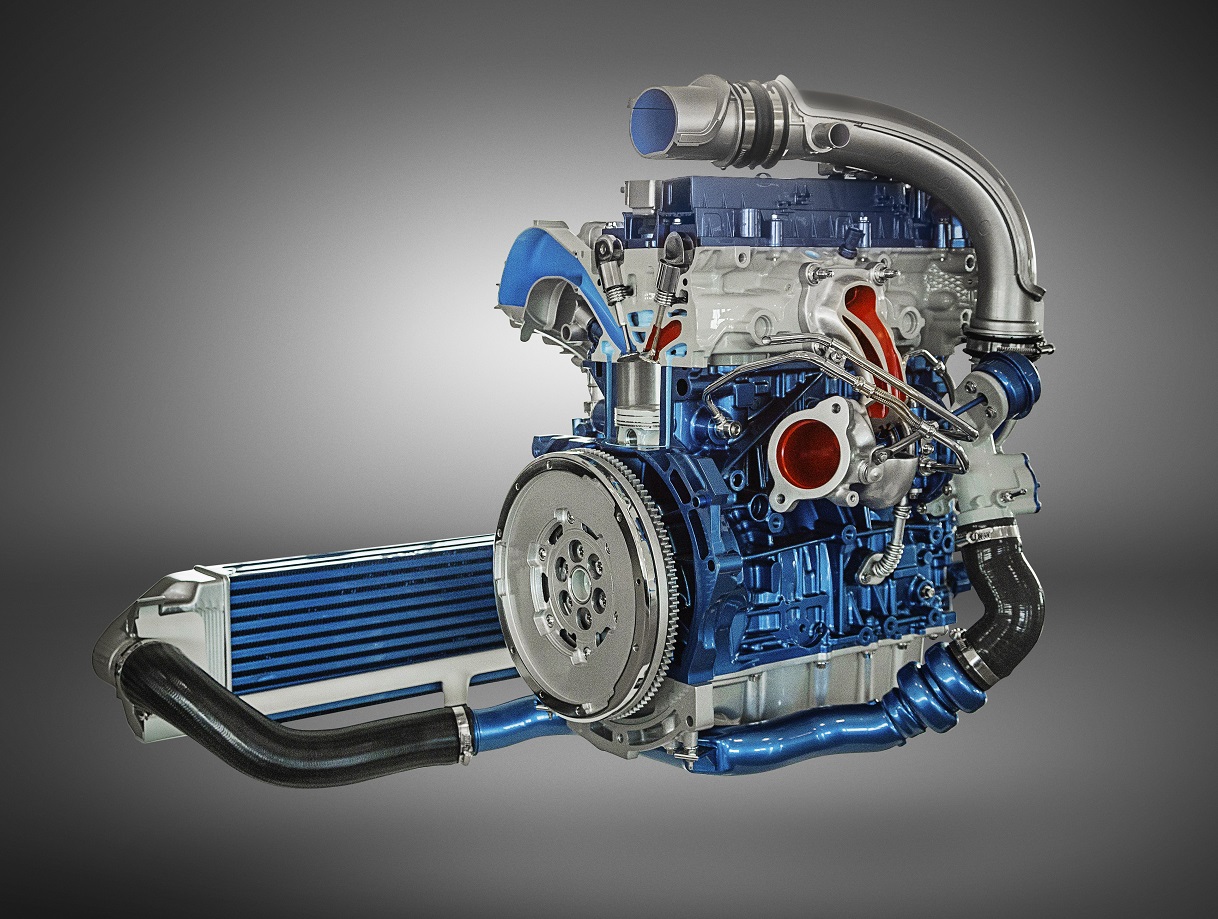 2.3L EcoBoost as it was used in Ford Focus RS two years ago, with smaller turbo.

Mustang shoppers wanting a V-8 are awfully hard to sway and probably snicker at the notion of a 4-cyl. muscle car. But it would be foolish to sign on the dotted line for a V-8 without at least test driving this new High Performance 2.3L, which is more powerful than the 300-hp 4.6L V-8 that arrived with the all-new Mustang in ’05.

On a test drive along the winding California Highway 1 from here to Bodega Bay and back, the new 2.3L EcoBoost is a spirited companion that ably conquers elevation changes, feels light and nimble up front and never runs out of breath as the 6,500-rpm red line approaches when shifting manually.

This is where the engineers earned their keep, by allowing for sustained high-rpm flogging and achieving a torque curve that delivers 90% of peak thrust between 2,500 and 5,300 rpm – a big gain over the standard 2.3L.

Maximum torque is rated at 350 lb.-ft. (475 Nm), same as in the Focus RS, but the peak did not arrive until 3,200 rpm in the previous application. The new high-output engine achieves an impressive 143 hp per liter.

Acceleration is linear, and the new EcoBoost feels much more stout than the base 310-hp 2.3L, which tends to run out of breath at high rpm. On paper, these two engines are separated by 22 hp, but it feels like so much more.

Dare I say, there never was a moment in motion when I yearned for the V-8.

The only time I would have appreciated the V-8 was standing outside the car before we departed. Frankly, the 2.3L EcoBoost sounds a bit crude from the outside at idle. But behind the wheel, the sound is less objectionable, and there are four exhaust modes to choose from.

My favorite exhaust setting was – oddly enough – Quiet, with the drive mode set for SportPlus for a stiffer suspension, while shifting manually with paddles mounted on the steering wheel. 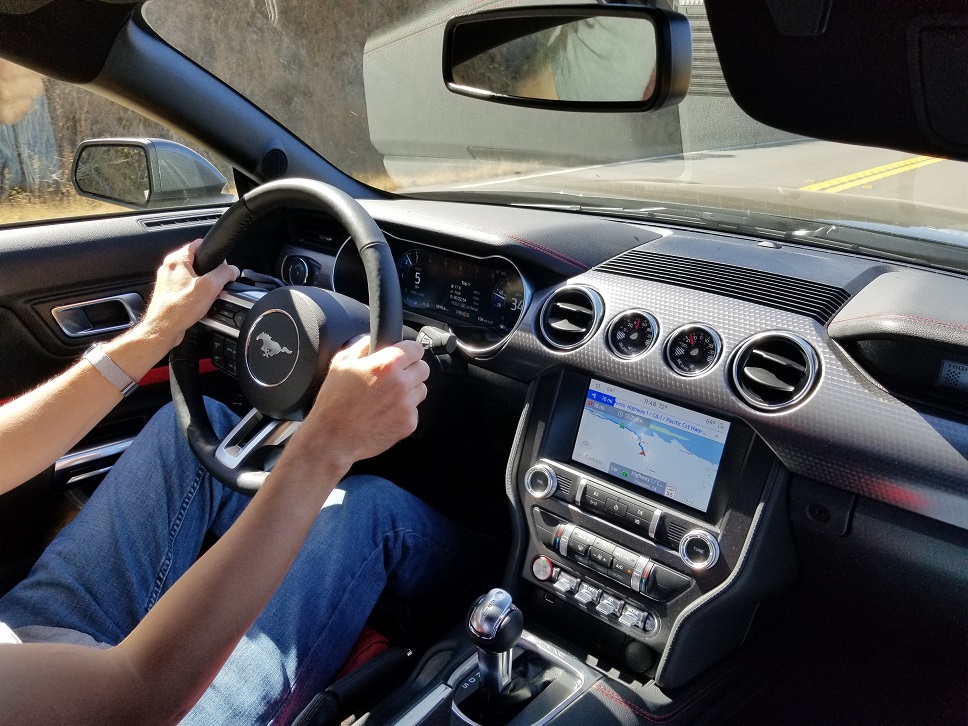 This combination, enhanced by a large tachometer that sweeps all the way across the top of the digital instrument cluster, makes for an exhilarating drive that is more than enough for just about any muscle-car intender.

In addition to the 10-speed automatic transmission, a 6-speed manual is available – and is lots of fun. Through the first six months of ’19, more than 78% of Mustang buyers in the U.S. have opted for the automatic.

The EcoBoost High Performance is attractively priced, starting around $33,000, a step-up of about $5,000 over the base 2.3L EcoBoost. The package includes larger brakes from the Mustang GT, a 3.55:1 limited-slip rear axle and 19-in. machined aluminum rims and summer tires.

Mustangs with the newly available powertrain are on the way to showrooms now.