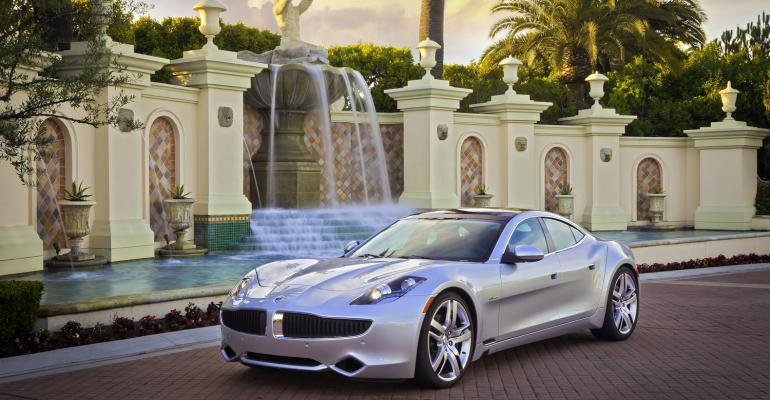 BEVERLY HILLS, CA – Buddhism teaches that karma divides the fortunate from the less fortunate. The ’12 Fisker Karma does the same.

Consider that, under optimal conditions, the Karma emits only good vibes, thanks to a 20k/Wh lithium-ion battery that powers two rear-mounted traction motors.

And its interior wood, reclaimed from scorched hilltops and Lake Michigan’s chilly bottom, preserves precious forests one tree at a time.

Sensual styling is not among these. If the Karma were a book, it would be ‘The Kama Sutra.’
Even here in the car-conscious outskirts of Tinsel Town, where Maseratis seem mundane and Bentleys almost bore, the Karma is an eye-catcher.

A hipster in an Aston Martin V8 Vantage flashes the “OK” sign near Wilshire Blvd., which elicits a chuckle from Fisker founder and CEO Henrik Fisker, who once led Aston Martin. “I designed that car,” he says of the Vantage.

The resulting proportions suggest a cheetah in full flight, the auto maker says.

This comparison creates unfair expectations because the Karma is not a nimble sports car. It is, however, a rock-solid grand touring car given to satisfying acceleration, able braking and flat cornering.

In electric-only “stealth” mode, the Karma is pleasingly quick, considering its 5,300-lb. (2,404-kg) mass. Aided by a Fisker-designed, single-ratio transmission/differential combo, acceleration is as smooth as the Dalai Lama’s head.

As the name implies, stealth mode delivers near-monastic silence. On the inside.

In deference to vision-impaired pedestrians who depend on noise to judge traffic conditions, Fisker commissioned the movie-effects wizards from ‘Batman’ and ‘Tron’ to come up with a signature warning sound for the Karma.

Audible up to 25 mph (40 km/h), after which road noise provides sufficient heads-up, the alert brings to mind a combination of rushing wind and mechanical hum – the way flying cars will announce themselves, if ever they get off the ground.

Equally entertaining is “sport” mode, which reduces battery depletion by tapping the Karma’s 2.0L turbocharged I-4 to generate juice for the motors. Their blended output: 403 hp.

Two “hill” settings also draw on both power sources, with bias toward the A123 battery. The result is palpable boost.

All modes are activated with paddle shifters. Except for “charge-sustain,” which automatically triggers the engine to spark the Karma’s 175 kW generator – an event that occurs after the battery has been sapped of its 50-mile (80-km) electric-only range.

WardsAuto flat-lines the battery after some 80 miles (128 km) of toggling between stealth, sport and hill modes in conditions that range from urban gridlock to moderate highway flow, with a little canyon-carving in between.

Navigating the route’s twistier sections actually is made easier by the battery. Mounted on the floor and weighing 605 lbs. (275 kg), which is slightly less than a trio of Indian elephant calves, it establishes a formidably low center of gravity.

Packaged inside a structural tunnel that runs longitudinally down the center of the cabin, the battery also affords balance that complements the car’s patent-pending short-spindle, short-long-arm suspension and rear self-leveling dampers.

Credit the Karma’s aggressive regenerative braking protocol and Fisker’s unique take on the sun roof for any battery-range bonus. Laced with photovoltaic cells, which also provide a striking graphic, the roof can offset 0.5 kWh of energy per day.

This translates to 200 miles (321 km) of gasless, emissions-free driving per year, the auto maker says.

Disappointingly, there is no hint, in any mode, of torque approaching the car’s monstrous peak rating of 959 lb.-ft. (1,300 Nm), which Fisker says is available at tip-in. (See above pachyderm reference.)

The Karma’s overall refinement is commensurate with 4-door luxury cars such as the Panamera Hybrid S and Mercedes-Benz S400 Hybrid. But at low speed, the transition to charge-sustain is met by slight spikes in vibration and harshness.

WardsAuto observes peak fuel economy of 41 mpg (5.7 L/100 km) and an average of 36 mpg (6.5 L/100 km), which in an outrageously stylish luxury car, delivers a serenity consistent with the car’s ultra-modern interior, where the green theme continues.

Swathed in suede-like Alcantara, the EcoChic trim level is devoid of materials derived from animals. Even trees are spared as Fisker offers walnut trim crafted from the remnants of California wildfires.

The oak-trim option comes from old-growth wood discovered, perfectly preserved, at the bottom of Lake Michigan – a legacy of pioneer-era lumber mills.

Even when a Karma is equipped with leather, as in its EcoSport models, the material’s carbon footprint is minimal. Scotland-based supplier Bridge of Weir fuels its processing plants with oils rendered from animal hides.

Buddhism urges the attainment of enlightenment, partly through the observance of karma. Appropriately, expect the Fisker Karma to establish a higher plane in the luxury-car market.

Quiet as a monastery / No monk can afford