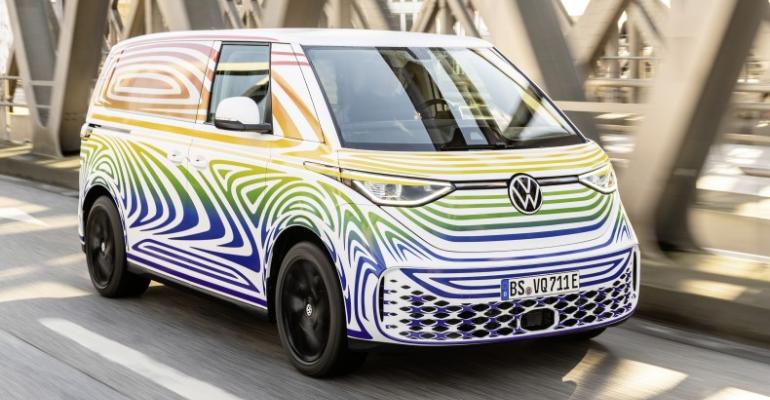 Volkswagen’s ID.Buzz near-production prototype proves itself worthy to carry on the Microbus tradition, in an electric form.

HAMBURG, Germany – There can’t be many more iconic commercial vehicles than the original rear-engined Volkswagen Microbus. First launched in 1949, the forerunner to today’s modern-day delivery van has built up a true cult following over the past 73 years.

The mobility of choice for a generation of family-car buyers, tradespeople and tie-dye wearing hippies, it has long entered automotive folklore as a boxy but class-agnostic vehicle with adequate performance, outstanding versatility and a charm matched by few if any competitors.

The Microbus has been called a lot of things, but the most enduring description is as “a van for the people.”

Over the years, VW has often considered resurrecting the packaging ideas behind the original Microbus as a more contemporary lifestyle-oriented sibling to the modern-day Multivan. However, it wasn’t until the German automaker decided to develop its own dedicated MEB electric-car platform that plans for a rear-engine van really began to take shape.

The ID. Buzz concept debuted at the 2017 Detroit auto show and four years later that concept has now matured into an electric-powered production car of the same name. The prototype we drive here still has its exterior somewhat disguised, but we’re told the vehicle is “very close to the final specification.”

Produced in the same commercial-vehicle factory as the seventh-generation Multivan in Hanover, Germany, the new VW model will be sold in Europe and other markets in civilian and commercial-vehicle versions, the latter called the ID. Buzz Cargo.

We drive the civilian version, a five-seat, standard-wheelbase model that goes on sale in October in Europe. A seven-seat, long-wheelbase variant is headed for the North American market next year and will also form the basis of a new ID. Buzz California camper planned for 2024.

Both feature conventionally hinged front doors and sliding side doors, along with a large single liftgate that opens at bumper level to a generous luggage area. The more rugged two-seat commercial model will come with one or two sliding side doors and either a liftgate or wing doors at the rear.

Smaller than the original concept, the standard wheelbase ID. Buzz is shorter, wider and lower than the seventh-generation Multivan launched in 2021. The 117.6-in. (2,987-mm) wheelbase is the longest yet for a car based on VW’s MEB platform. The long-wheelbase model that will be sold in the U.S. will allow it to accommodate three rows of seats and up to seven passengers.

The rear-wheel-drive ID. Buzz prototype we’re testing has a 77-kWh Li-ion battery (same as the ID.4) within the floor structure, providing it with a low center of gravity. Officials tell Wards the long wheelbase model likely will get the 111-kWh battery as previewed on the ID. Buzz Cargo concept revealed in 2018.

Propulsion for the initial model comes by way of a rear-mounted synchronous electric motor, shared with the ID.4, developing 201 hp and 229 lb.-ft. (310 Nm) of torque.

The ID. Buzz offers a comfortable and ergonomically sound driving position in a uniquely styled cabin. The front seats are set 10.3 ins. (262 mm) higher than those of the ID.4, providing a commanding view of the road and excellent all-round visibility.

The high-mounted dashboard is uniquely designed and houses both a small digital instrument display and standard 10-in.(25.4-cm) infotainment touchscreen (12 in. [30.5 cm] is optional). Whereas other ID. models use a rocker-style controller mounted high up on the end of the instrument display for gear selection, the ID. Buzz uses a steering-column-mounted lever.

There is a minimalist look to the fascia, with a conspicuous lack of buttons and switches. The materials appear sterile, but they’re mostly agreeable to touch and should wear well over time. To help break up the large surfaces, VW offers a range of color schemes, including a two-tone treatment. There is also optional ambient lighting to brighten various elements.

The perceived quality of the pre-production prototype was high, though a final assessment on the fit and finish will have to wait until we get to drive production versions of the ID. Buzz later this year.

Perched up high on firm, broad and supportive seats with generous adjustment, you get a real impression of spaciousness in the front. It is in the rear though that the packaging advantages inherent in the MEB electric car platform are really obvious. The second seat row offers loads of legroom, and a flat floor means the middle-seat occupant is not forced to straddle a transmission tunnel. As part of VW’s efforts to make it as practical as possible, it has also integrated folding plastic tables in the backrest of the front seats.

The rear-mounted electric motor is not exactly overflowing with power, but the instant onset of torque helps to propel the ID. Buzz off the line with great response and good deal of purpose. The bluff-nosed VW initially feels quite brisk as it accelerates away, but the potency begins to tail off once you’ve pushed beyond typical urban limits as both rolling resistance and aerodynamic drag builds.

Dig deeper to unleash the maximum electric reserves, and the performance continues to feel compellingly authoritative up to typical highway speeds. VW promises more powerful versions, including a dual-motor, four-wheel-drive GTX model boasting up to 220 kW and 339 lb.-ft. (460 Nm) of torque.

The electric driveline is pleasantly smooth and very quiet, making for a relaxing drive with the primary source of noise coming from the tires and a bit of wind around the mirrors.

The new VW is precise with lightly geared steering that requires little effort but is short on feedback. With a tight turning circle, it is highly maneuverable and quite agile in city driving for such a heavy and tall car. In this respect, it actually feels a lot smaller than it is. A multitude of parking sensors and VW’s Park Pilot system makes parking an easy affair.

It also impresses out on the open road with good body control and resistance to gusty side winds up to a limited top speed of 90 mph (145 km/h). While its dynamic expectations are perhaps not as high as those for lighter and smaller electric-powered ID. models, it proves assured and stable.

In D (Drive) mode, the ID.Buzz rolls on without any discernable mechanical drag when you lift off the throttle at speed. Twist the gear selector to B (Battery) and it pulls up quite smartly as the electric motor acts as a generator, accumulating kinetic energy and stowing it back into the battery for added efficiency, with quite a noticeable braking effect as a result.

The battery can be charged at up to 22 kW on an AC system and at up to 170 kW on a DC system. A Plug & Charge function allows the ID. Buzz to communicate credit-card data with the charger on compatible stations. It also supports bi-directional charging on a DC wall box, allowing you to use the ID. Buzz to directly power household appliances or top-off a home battery.

We’ve waited a long time for a true rear-wheel-drive successor to the original VW Microbus. The ID. Buzz does not disappoint. Its size and electric driveline clearly won’t suit everyone, but its sheer functionality and practicality is sure to find appeal among a certain group of customers.

It is a pleasing car to drive with both brisk and agile qualities in everyday driving. It also offers outstanding refinement by commercial-vehicle standards and a genuinely comfortable ride. It feels very complete and ready to take on the electric-powered rivals like the Mercedes-Benz EQV, even in this pre-production prototype form.

Like the original, it is a vehicle to do everything, including eat, sleep, play, work and…much more. 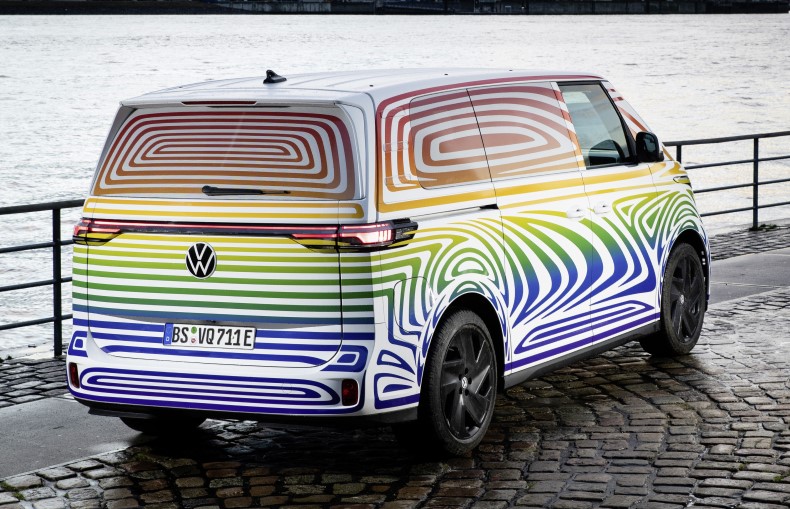