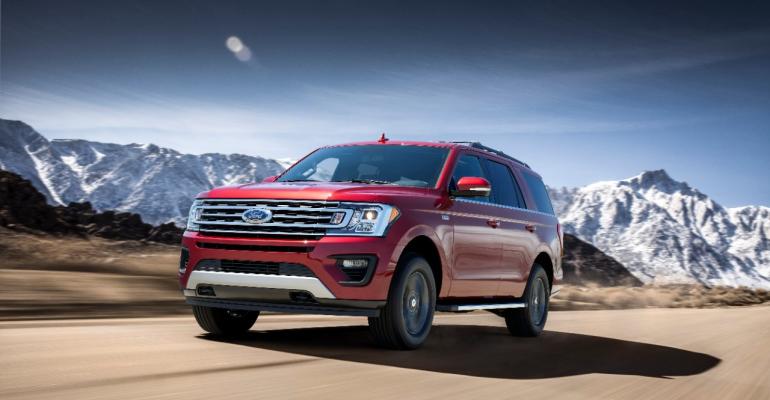 Ford’s fullsize Expedition SUV gets a complete makeover for ’18 including an aluminum body, a 10-speed transmission and impressive on- and off-road capabilities.

Upgrades to the ’18 Expedition include a lightweight aluminum body that shaves 300 lbs. (136 kg) off the curb weight, a more fuel-efficient powertrain, a revamped interior and a wide range of trim and option levels to accommodate everyone from adventurous off-roaders to long-distance travelers towing trailers.

The standard gearbox is a 10-speed automatic compared with the previous model’s 6-speed, contributing to a 5% gain in fuel efficiency.

The upgraded engine feels up to the task, with the extra torque providing good pull from a standstill and the added power sufficient to comfortably maintain cruising speed. The new automatic is smooth and quick-shifting, readily jumping as many as a half dozen gears to match the engine’s sweet spot when extra power is demanded.

On-road balance and control is a high point as we pilot the big rig through winding roads in the foothills, the electrically assisted power steering helping lighten the load without making the truck feel disconnected. Brakes are particularly responsive. The ride is steady and quiet.

Off-road, the Expedition is relatively easy to thread through a hilly and twisty gravel route, and is particularly impressive tackling steep downhill grades with Hill Descent Control activated and handling all the braking to limit speed between 2 mph (3 km/h) and 20 mph (32 km/h). In addition to HDC, the FX4 Off-Road package includes an electronically locking rear differential and a front skid plate.

Inside, the Expedition is all about creature comfort for up to eight passengers, with sliding second-row seats for legroom flexibility, 15 cupholders, two USB ports in each row and Wi-Fi connectivity for up to 10 devices.

Drivers will note the elimination of a center shift lever, replaced by a rotary shift knob and the Terrain Management Control knob allowing easy selection of powertrain assistance depending on conditions. We deliberately tested the electronic shifter’s ability to automatically switch to Park as we attempted to step out of the driver’s seat with the vehicle still in Drive. Thankfully, yes, it works.

The new Expedition launches into a challenging market. As much as Ford’s F-150 is the perennial truck sales leader, the Dearborn automaker’s Expedition can’t make a dent in the annual deliveries of body-on-frame fullsize SUV competition from General Motors.

After hitting a high-water mark of 233,125 deliveries in 1999, Expedition sales steadily declined, dipping to just 31,655 units in 2009, WardsAuto data shows. The numbers improved to nearly 60,000 last year, but GM’s combination of Chevrolet Suburban/Tahoe and GMC Yukon/Yukon XL totaled more than a quarter of a million sales during the same period.

While midsize CUVs are all the rage, Ford research indicates Millennials starting families and Baby Boomers seeking taller ride height are gravitating back to traditional SUVs. McCarty says the all-new Expedition’s improved and best-in-class fuel economy, torque, towing and second- and third-row legroom give it a strong position in that growing market.