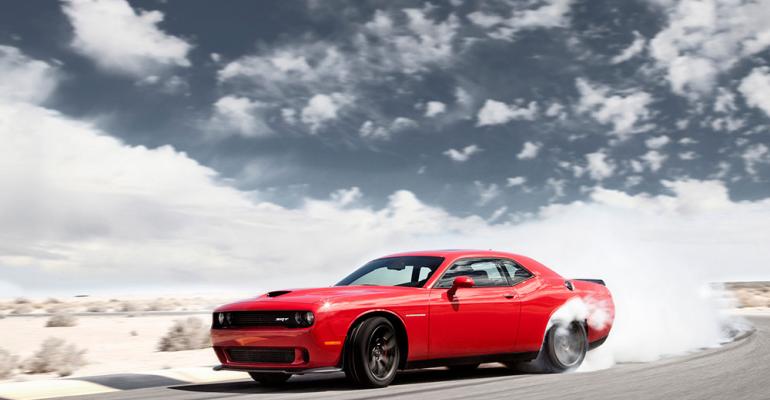 The car breaks the 700-hp barrier but isn&rsquo;t like a wild animal that turns on you.

PORTLAND, OR – What the heck, let’s state the obvious about the Dodge Challenger SRT Hellcat with 707 hp, record-breaking for a non-exotic car.

This is not a vehicle you give to your kids on their 16th birthday. And except for the little old lady from Pasadena in her super-stock Dodge, elders who prefer to drive 30 mph (48 km) in the fast lane will want something less hellish than the Hellcat.

“This car is not for everybody,” Tim Kuniskis, president and CEO of Dodge, says of the Hellcat at a media preview here. The event includes the Dodge Challenger and the RT versions, but the Hellcat takes center stage.

The Hellcat goes on sale later this summer. If it’s not for teens or senior citizens (trust me, it isn’t), who will buy it? It’s for driving enthusiasts who like life in the fast lane and have $59,995 to spend on a car that is National Hot Rod Assn.-certified for a 10.8-second quarter-mile time at 126 mph 203 km/h).

The Hellcat has generated a lot of buzz. In a recent WardsAuto reader poll, participants ranked it as the summer’s hottest vehicle introduction. Dodge bills it as the most powerful muscle car ever. No one disputes that claim.

But the thing is, despite breaking the 700-hp barrier and despite the somewhat menacing name, the Hellcat is reasonably obedient. Driving it is not like riding a tiger.

Oh, you can get in trouble if your driving-skill limits are exceeded while trying to push the car to its limits. But when driven responsibly enough, the Hellcat will not turn on you like a wild animal. You control it, rather than the other way around.

That was evident during hot laps at the Portland International Raceway, as well as driving on public roads, which is more inhibiting (“What color are Portland police cars again?”)

A lot of people love the original muscle cars of the 1960s and 1970s, and they were cool for their era. But the first ones were just ordinary cars with big engines dropped into them. When pushed, they were like out-of-control cruise missiles.

But modern muscle cars, with the Hellcat as a fine example, are manifestations of modern engineering. They are carefully balanced, ruggedly outfitted and come with sophisticated suspension systems that help keep things under control.

Yup, It's Got a Hemi

The source of the Hellcat’s power is its 6.2L Hemi V-8 engine. This is the first supercharged engine for the reintroduced Challenger. In comparison, the Dodge Viper’s naturally aspirated 8.4L V-10 engine generates 640 hp at 6,200 rpm.

To boost that, some avid Viper owners get their vehicles supercharged as an aftermarket add-on. A talented young auto technician at a New York dealership tells me he does that work, but it’s tricky to install a supercharger in a Viper because it’s a tight fit under the hood. Plus, owners all but look over your shoulder while you do it.

A factory-made supercharged engine is the way to go, if you’re going that way. The SRT (Street and Racing Technology) team engineered the Hellcat in-house. The supercharger’s 2,380 cc/rev blower features integral charge coolers and an electric bypass valve to boost pressure to a maximum 11.6 psi (80 kPa).

The car gulps premium 91-octane gasoline to get to 707 hp. The fuel line is extra-wide to feed gasoline to an engine with an appetite. Eight injectors can deliver a flow rate of 600 cc/minute each, totalling about a gallon a minute in maximum mode.

While the engine is busy slaking its thirst for fuel, the supercharger gulps a lot of air. The power-bulge aluminum hood has a center air intake and dual air extractors. Where fog lights go on regular Challenger models, the Hellcat has air intakes. An air-catcher inlet port feeds ram-air directly into the engine.

Strong and durable materials are needed to contain the power in the Hellcat engine. Its cast-iron block features unique water jackets to deliver proper cooling.

Other elements include a forged-steel crankshaft with induction-hardened bearing surfaces. The crankshaft can withstand firing pressures of 1,595 psi (110 bar), the equivalent of five family sedans standing on each piston every two revolutions.

Drive modes can crank the driving experience up or down by controlling horsepower, shift speeds, traction and the suspension.

In a first for Chrysler, the Hellcat comes standard with two key fobs: red and black.

If a valet takes possession of your car and you want to mitigate the possibility of him doing major burnouts in the parking lot, give him the black fob. It retunes the rpms, prevents the car from going into launch mode and restricts output to a safe-mode 500 hp. That’s hardly taking the fun out of valeting this car, but it provides a measure of owner reassurance.

Is it rough shifting in the rawest mode? “Absolutely,” Kuniskis says. “But dial back to street mode and it’s easier. It’s not loaded.”

When electronically reined in, the Hellcat can function as a daily driving car, Kuniskis says. That’s stretching it a bit. OK, it could serve that role. And it has a decent-sized trunk and a backseat. But this car as a daily commuter seems out of place, like a lion in Canada where, by the way, the Hellcat is made.

The first time the Hellcat was fired up at the Brampton, ON, plant, the noise was so powerful that workers ran over to investigate.

Cars with smaller engines are becoming more popular. Powertrain engineers are working wonders with 4-cyl. engines that provide surprising power and impressive fuel economy. The public likes them, as evidenced by take rates.

But there still is a small and lucrative niche for old-style Detroit muscle driven by performance buffs and affluent Baby Boomers who as kids adorned their bedroom walls with posters of slick cars.

Talk to engineers at General Motors, Ford and Chrysler who work on big engines with massive outputs, and watch them get starry-eyed discussing their work.

A current WardsAuto poll asked: “With CAFE targets toughening, where will horsepower top out for non-exotics in 2020?” In polling so far, most respondents (30%) said “over 800.”

Muscle cars once were declared dead. Now, they’re alive and well. They won’t sell in particularly high volumes, but that’s not the point.

Since Dodge announced plans to build the Hellcat, “dealers have been calling and everyone has been talking about it,” Kuniskis says. “That’s good. That’s what a halo car is supposed to do.”

Dodge to Focus on Performance; Grand Caravan Scrapped
May 06, 2014