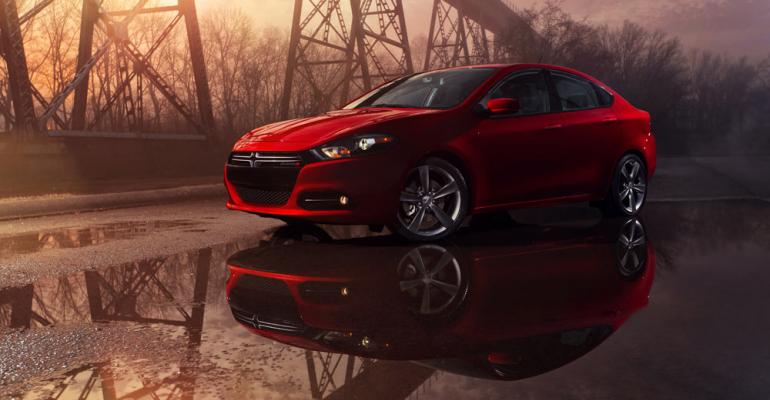 Dart GT Lives Up to Everything But Its Name

In an increasingly competitive sport-compact scene, Chrysler&rsquo;s newest entry is bound to be lost in the shuffle.

CHELSEA, MI – Sporty compacts are becoming ubiquitous as auto makers chase younger buyers who aspire to the muscle-car big leagues but for the most part place a higher value on frugality.

The market is varied, from the Ford Focus ST to the Hyundai Veloster. Combinations include optional high-output powertrains, stylish trim levels, aggressive exterior styling and racetrack-style handling so customers can get more from their daily commutes.

Enter the Dodge Dart GT, which has been described by Chrysler executives as a placeholder for a potential (but unconfirmed) SRT-tuned version of the auto maker’s newest C-segment entry.

Since the Dart’s 2012 launch, Mopar fans have been wondering if a juiced-up variant would follow in the footsteps of the Neon SRT or Caliber SRT. No word yet on an SRT Dart, but perhaps the GT is a toe in the water.

The Dart GT is the first in the U.S. auto maker’s lineup to use Chrysler-Fiat’s 2.4L 4-cyl. Tigershark with MultiAir II engine, which churns out 184 hp and 171 lb.-ft. (232 Nm) of torque. The naturally aspirated I-4 also debuts in the new Jeep Cherokee later this year.

The Cherokee aside, much of the ethos of the Dart GT also revolves around the engine. It is larger and more powerful than the 1.4L MultiAir Turbo and the 2.0L Tigershark available in lower-cost models.

But does a bigger engine mean it’s ready to play alongside other SRT-tuned models? In this case, not really.

The bright side lies in vast improvements that will make the Dart GT stand out in the compact crowd. It handily outperforms its lower-trim counterparts with a revised standard 6-speed manual or optional automatic transmission.

Whereas throttle response with both the 1.4L and 2.0L powertrains was slow and gummy, the potent 2.4L propels the Dart GT much more smoothly.

Journalists at Chrysler’s proving grounds here test drive the GT, only available with an automatic transmission, on a short track with tight curves, lengthy straightaways and varied grades and pavements.

On a track with no speed limits, it’s easy to push the needle without guilt or hesitation. The 6-speed automatic shifts crisply and gives a subtle burst each time it ratchets higher.

At idle, the engine stutters and chugs a bit, but hitting the gas makes it sing. Engineers say the exhaust was tuned not to intimidate but to remind the driver this is no average compact. In this case, it works, although the car never feels very fast.

Despite its portly curb weight of 3,348 lbs. (1,519 kg), the Dart GT takes corners cleanly with little body roll. Brakes on other Dart models are a bit too sensitive, but engineers tuned the GT’s stoppers to do the job without being so grabby.

The GT absorbs bumps and grooves as well as any compact, and road noise is minimal.

Perforated black leather seats up front are trimmed with red stitching and feature race styling. They have a firmness that’s unusual for this price class; the GT stickers at $20,995.

A wrapped gearshift and steering wheel complement the soft-touch instrument panel and center console. The passenger side offers under-seat storage, same as on the standard Dart. Other upscale features include an available moonroof and customizable thin-film transistor display.

Sporting new 17-in. wheels and blacked-out grille, the Dart GT appears to have big aspirations.

The Dart GT is a decent package, but Chrysler officials referring to it as a “next-best” alternative to an SRT model is disappointing.

It’s easy to think of last year’s Dart ad campaign, which included the catchphrase, “never too much power.”  But in the end, the GT could use a little more.