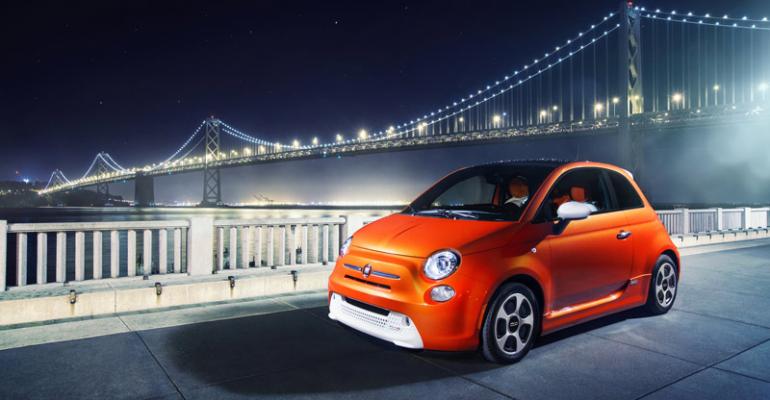 Banking on the growing popularity of the 500 subcompact, engineers in Auburn Hills combine electric power with signature Italian performance.

The Rolls-Royce Corniches and Audi R8s are still a mainstay, but so is the Toyota Prius. Spotting a Tesla Model S may be a rarity for automotive journalists coming from other states, but we lose count of the electric sedans tooling along palm-lined streets.

Electric and hybrid vehicles obviously have their place in this state heavy on green legislation, but Californians need style with their substance. Enter the Fiat 500e, which is Chrysler-Fiat’s answer to U.S. fuel-economy demands.

In the interest of full disclosure, it would be safe to say Chrysler in the U.S. was dragged kicking and screaming into the EV market. CEO Sergio Marchionne has long said the technology’s development costs far outweigh the benefits as car buyers overall remain lukewarm to EVs. Infrastructure issues outside of California also have kept the electrified market in check.

From a sales perspective, Marchionne predicts the auto maker won’t break even with 500e deliveries, but the manufacturer will try to simplify lease deals.

The EV is California-only for now, and Fiat will offer a 36-month, $199-per-month lease with $999 down. The base price is listed at $32,500, but eligible customers can combine Fiat rebates, California incentives and federal credits to receive up to $12,000 in discounts.

Fiat has said other U.S. markets will follow California in receiving the 500e, culminating eventually in a nationwide rollout. The launch here puts it squarely against the comparably sized Honda Fit EV.

Although the 500e has Italian roots, Chrysler says its electric powertrain was developed completely stateside at the manufacturer’s Auburn Hills, MI, headquarters. It’s unclear whether the technology will be seen on future vehicles.

Outside, the 500e makes an immediate statement in fashion-conscious Los Angeles, with five colors: Electric orange, white, steel grey, silver and black. The latter four all pair with orange accents in keeping with Fiat’s professed theme to avoid unexciting “eco-friendly” colors such as sky blue or celery green.

There’s something a bit more aggressive about the electric 500 than the Pop or Lounge gasoline-powered versions. Designers note the stance is slightly wider (to accommodate the battery), and the body sits lower.

Another distinguishing design trait is the bumpers, which always are a different shade from the primary exterior color. The bumper has rounded grooves that, from a distance, recall a young driver’s Lego-building days.

Inside, the interior borrows directly from non-electric 500 models except it swaps in push-button gears for a typical shifter. The wide, plastic instrument panel carries over, as well as the no-frills sound system. The passenger seat, oddly enough, sits higher than the driver’s seat, and like the current 500, backseat legroom is practically nonexistent.

But designers make up for interior frugality with stylish vinyl seating, all white with a single orange stripe through the middle and orange head restraints.

Fiat has partnered with TomTom for a standard, plug-in navigation system that fits neatly atop the dash but takes up a lot of glovebox space when not deployed. The TomTom system also points drivers to nearby charging stations.

The 500e comes with an iPhone- and Android-compatible app that can tell drivers how much juice is left in the battery; schedule a charge; help drivers find a car in a large parking lot; pre-condition climate controls; and, like the TomTom system, identify nearby charging stations. There also is a 24-hour help line for drivers, and the 500e, itself, has a built-in 3G hotspot.

Heading out, we begin with 85 miles (137 km) of range, and the weight of the 97 lithium-ion battery cells is immediately noticeable.

The otherwise zippy 500 wobbles a bit before balance is found, and extra caution is necessary if you stop on an incline and have to continue uphill.

Another observation? With all gadgets off, road noise is evident, amplified by the lack of typical engine sounds to cover up the din of wheels-to-pavement.

With the radio at a moderate level and windows down to minimize air-conditioning usage, we can’t help but notice a rapid depletion in available range. After about a half-hour of normal driving on residential roads, the trip computer says we have burned 30 miles (48 km) worth of juice, despite driving less than 20 miles (32 km).

Regenerative braking and a hill-descent mode help preserve some of the power, but the fast drop illustrates the reality of range anxiety. Somehow, a half-hour rest before a second round of driving along roads with similar elevation changes keeps the range in the mid-50s for another 20 minutes.

What the 500e does deliver is performance. It’s not an Abarth, but plenty of low-end torque and ample acceleration keep the EV on par with its gas-powered counterparts. Electronic stability control can be turned off for EV thrill-seekers.

Despite the weighty battery, the tiny 500e preserves the nimbleness it’s known for when turning around tight curves or weaving through Los Angeles traffic. Steering feels a bit loose sometimes, and grabby brakes can make for heart-stopping deceleration.

Once a groove is found, it’s easy to forget some of the typical restrictions of an EV.

The 500e has no problem getting up to 50 mph (80 km/h) but feels slightly taxed on the freeway at higher speeds.

There’s a standard battery-cooling system that engages when the 500e is turned off. Other standard equipment includes hill-start assist and an intelligent battery sensor that switches off less-critical functions as the charge reaches lower levels. Fiat’s Blue&ME telematics system (instead of Chrysler’s UConnect) also is standard.

Fiat is banking on the growing popularity of the 500, re-launched in North America in 2009, to woo potential electric buyers. But limited success for the 500e might be preferable, considering the money Fiat loses on each sale.

Still, if Chrysler must play the fuel-economy game, at least it’s putting its best player forward; only the 500 can offer nimble city driving and eye-catching style for the discerning buyer.