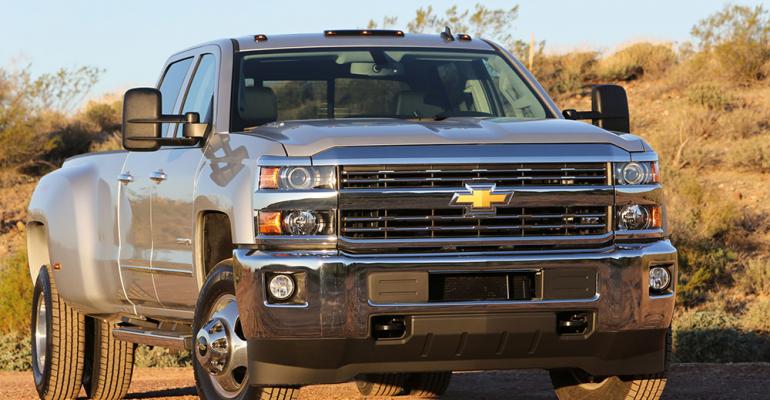 If seat-of-the-pants testing is any indication, it might be time to reverse the pecking order in the big-pickup segment.

PAYSON, AZ – In the battle for big-pickup supremacy among the Detroit Three, the principal debate mostly has been argued not on the pavement but in specifications sheets, with the automakers taking turns trumping each other in diesel-engine torque output.

Torque is the force a truck’s engine creates to turn the wheels and the greater the torque the greater a truck’s promotable pulling power. For Chrysler, Ford and General Motors recently, big has been better.

Not to be shamed, Ford answered a few months later with an available software tweak to take the PowerStroke to an eye-popping 800 lb.-ft. (1,084 Nm). Chrysler joined the tit-for-tat last year with the Cummins High-Output I-6 turbodiesel, which doles out a now-segment-leading 850 lb.-ft. (1,152 Nm) of torque in the ’14 Ram 2500.

But if seat-of-the-pants testing here is any indication, it might be time to reverse the pecking order in the three-quarter-ton segment.

Hitched with a 10,000-lb. (4,356 kg) trailer along the Rye grade, a 7% incline on Arizona Highway 87 that stretches for about five miles and brings Class 8 trucks to a crawl, a ’15 Silverado with carryover output ratings from ’11 decimates the Super Duty and Ram 2500.

Exhaust braking is a key safety feature of these diesel engines. Exhaust brakes, in short, slow a truck on downhill grades without applying the mechanical brakes. When engaged an exhaust brake reduces brake wear, especially during towing and hauling, and provides an extra bit of stopping power.

The exhaust brake on the GM trucks worked best. Setting the cruise control of each competitor at 55 mph (89 km/h) and coasting down the grade with the trailers, the Silverado consistently held its speed better than the Super Duty or the Ram 2500. Sometimes it was by an alarmingly wide margin.

Of course, the tests were hardly scientific and focused on only two features of the three splendidly capable big pickups. In fact, the ease with which these trucks trailer heavy loads makes a fella feel like he could hitch up the moon.

It’s worth noting that a recent WardsAuto diesel shootout with these three rivals using essentially the same engines saw the Ford Super Duty emerge as the top workhorse.

This test reveals, however, the difference between real-world performance and press-release rhetoric.

Pulling other loads around “Zane Grey Country,” the Silverado and its Sierra stablemate rarely break a sweat and technologies such as trailer-sway mitigation boost trailering confidence.

The trucks look good on the job, too. The Silverado and Sierra each borrow attractive exterior styling updates from the redesigned half-ton models, but get bigger, bolder grilles to match their oversized capabilities.

A new door design makes the truck cabins quiet as a tomb at highway speeds, while the available, leather-wrapped heated and cooled front bucket seats of the range-topping Sierra Denali recall the comfort and modern style of a Barcelona lounge chair.

Both trucks boast all the high-speed connectivity and various power outlets today’s contractor or rancher demands. Buttons and knobs are chunky so truckers can use them with a gloved hand.

Surprisingly, the power-assisted recirculating ball steering lacked on-center feel, especially around town. GM trucks typically receive inputs more promptly. These also are among the biggest light-duty pickups available – the Silverado HD has its own Super Bowl commercial this year, for goodness sakes – so parking-lot maneuverability is not their strong point.

The next-generation Silverado and Sierra HDs nonetheless improve on an existing formula combining finely tuned towing and hauling skills, contemporary styling and all-day-long interior comfort with a commanding road presence. But perhaps more than ever, these new big pickups can talk-the-talk and walk-the-walk.