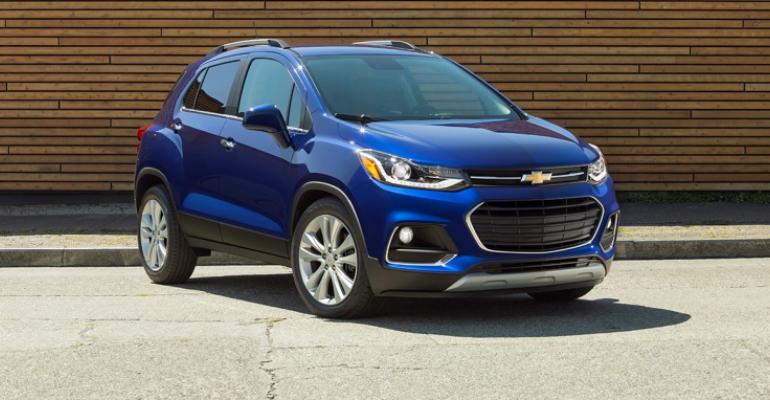 Previously, the midgrade LT trim level was the most popular with Trax buyers, but GM executives expect the mix to richen due to the addition of a number of active safety features on the new Premier trim. Overall, the interior is much improved.

CHICAGO – Of the 16 vehicles in WardsAuto’s Small CUV segment, half of them didn’t exist five years ago. So far this year, U.S. sales within the sector are up 34.6% compared with last year, while the rest of the industry is essentially flat. These pint-sized utes are a hotbed of retail opportunity.

There are two ways to view General Motors’ place in this burgeoning market: The automaker is missing the boat because the Chevrolet Trax is sorely lagging behind the Honda HR-V, Hyundai Tucson, Kia Sportage, Subaru XV Crosstrek and three popular Jeeps.

The glass-is-half-full perspective says GM is very much in the hunt when Trax sales are combined with its platform mate, the Buick Encore. Together, the two models have found their way to 110,608 customers since January. The Encore went on sale first, in early 2013.

The Trax came later, in December 2014, and now the refreshed ’17 Trax is rolling into Chevrolet showrooms across America with a nicer interior, redesigned instrument panel, gauges and 18-in. wheels and new front fenders, hood, grille, headlamps, rear fascia, taillamps and 7-in. (18-cm) touchscreen.

Let’s be frank: The Trax is not an aspirational vehicle. Priced at $21,895 with front-wheel drive, this small 5-seater with a lot of hard black plastic inside might be the first new car for a small family or recent college grad.

A lot of consumers appreciate basic, reliable transportation, as demonstrated by the success of Honda, Subaru and Jeep (Compass and Patriot) in this category. The previous version of the Trax was comparable to these rivals in terms of feature content, material quality and fit-and-finish, but this mid-cycle enhancement represents Chevy’s attempt to move the Trax more upscale.

Until now, the midgrade LT trim level was the most popular with buyers, but GM executives expect the mix to richen due to the addition of a number of active safety features on the new Premier trim, which replaces LTZ for ’17. About 40% of customers opt for all-wheel drive, and the automaker expects that mix to hold with the new model.

Boosting the car’s connectivity are standard Android Auto and Apple CarPlay, which were not available previously in the Trax and allow simple access to your smartphone apps for music, navigation, hands-free calling and other services.

A lot of customers in this segment don’t want to pay $500 for an in-dash navigation system, so there isn’t one available, making Android Auto and Apple CarPlay even more attractive. I have had success pairing my smartphone with Android Auto in a number of GM vehicles, but repeated attempts in the Trax proved fruitless.

For three months, Trax customers also get a free trial of OnStar roadside assistance and 4G-LTE connectivity, turning the car into a WiFi hotspot.

Interior Upgraded, In Some Ways

GM designers are proud of the upgraded interior, particularly the new soft-touch (and cleanly stitched) trim that wraps around the central display screen and extends to the vent, next to the passenger front door.

Pushed forward and sloping down toward the knees of a front-seat occupant, the stylish IP carries over the design language of the bigger, more-expensive new Chevy Malibu.

Look closely, however, and the cost-cutting shows in the rough-cut edge of the woven headliner, in the orange-peel surfaces on the rubbery door trim, in the use of an old-school mechanical parking brake, in the basic climate controls. Again, it’s a no-frills segment.

Mechanically, the Trax does not disappoint. It won’t win a drag race or an autocross, but the 138-hp Ecotec 1.4L turbocharged 4-cyl. engine, linked to a capable 6-speed automatic transmission, gets the job done without a lot of fuss. The engine carries over from the previous model.

We spent a day driving the Trax as most customers will: puttering through inner-city traffic and casually cruising through the suburbs. Along the way, the Trax was a willing companion, providing adequate power and torque. The short wheelbase makes for great maneuverability.

The Trax (and Encore) shares the Gamma II platform with the Sonic subcompact hatchback and springs from GM’s product-development center in South Korea.

These economy cars are important entries in emerging markets around the world, which leaves GM struggling to get enough of them from plants in Mexico and Korea to meet the needs of Chevy retailers in the U.S.

“Dealers are asking for three to five times the number of Trax that we can give them,” Betsy Flegg, Chevy’s senior manager-advertising and marketing, tells WardsAuto.