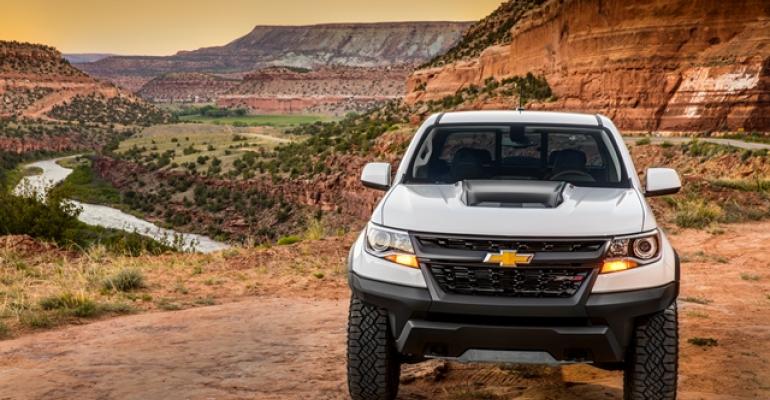 The new off-roader is a rock-climbing, trail-eating, desert-running beast certain to further reinvigorate demand for the entire line.

GRAND JUNCTION, CO – If the Chevy Colorado was a shot across the bow at midsize-pickup-segment leaders Toyota and Nissan, the rugged ZR2 variant of arguably the coolest truck out of the General Motors barn in many years scores a direct hit.

Fullsize pickups still rule the roost in the U.S. GM, Ford and FCA US line the pockets of their blue jeans with eye-popping profit margins from the trucks, and competition from foreign makes worries the brass back in Detroit about as much as a tick bird on a rhino.

But the midsize segment is another matter. The Toyota Tacoma and Nissan Frontier have ruled the roost for a good number of years, as the Detroit Three several years ago found it easier to just sell more fullsize pickups than bother with midsize offerings. Then GM upset the apple cart when in 2011 it announced a new-generation Colorado, which appears on track for a second year of more than 100,000 sales since launching in 2012.

The new Colorado ZR2 is a rock-climbing, trail-eating, desert-running beast certain to further reinvigorate demand for the entire line. So even if prospective buyers cannot afford the $5,000 premium for a ZR2 package, they likely will settle for lower-grade model in the line and push another Colorado out the door, much to the chagrin of Toyota and Nissan.

If there is a silver lining for the Japanese, it is that the ZR2 should advance the cult of the segment, or those weekend warriors who actually live the off-road lifestyle depicted in glossy magazine ads for the trucks.

In fact, the ZR2 easily could live life off the beaten path seven days a week. The pickup’s front and rear tracks are 3.5 ins. (89 mm) wider than a standard Colorado’s to give the ZR2 greater stability over uneven terrain, while its suspension is 2 ins. (51 mm) higher than the stock model to clear impediments.

But the bigger dimensions do not take away the key selling point of any Colorado, which is superior maneuverability compared to a fullsize pickup. That’s especially important in places such as the Bangs Canyon Trailhead here, where our Colorado ZR2 stealthily picked its way along narrow trails lined with rock outcroppings threatening to put a Texas-size scrape down the side of the truck.

The greatest addition to the ZR2 is a segment-first application of Multimatic Dynamic Suspensions Spool Valve (DSSV) technology.

Markham, ON, Canada-based Multimatic has supplied its DSSV damper technology to a number of winning motorsports programs over the years, including Formula One. Chevy went to Multimatic a few years ago to enhance the track capability of the ’14 Chevy Camaro Z/28, which marked the first production application of DSSV.

Chevy and Multimatic saw an opportunity to elevate the off-road capability of the ZR2 with DSSV while also giving the truck pleasant on-road dynamics for the drive to the trailhead. It is some truly clever valve work inside the aluminum damper housings that provide precise ride and handling whatever the conditions. During off-road situations, particularly, the technology gives drivers a little more confidence to push the truck harder, which is why they buy it in the first place.

Lock It to Rock It

Class-exclusive front and rear electronic locking differentials also make the ZR2 special. With the flip of a switch, a driver can lock the rear wheels together. With the transfer case in 4-wheel-drive low, the front wheels also can be locked together. The result is a pickup capable of scaling 12-in. (305-mm) rock stairs, as we did here, seemingly without breaking a sweat. A brief rain shower made the rock stairs extra-greasy, but it never affected the ZR2’s ability to go up and down Mother Nature’s steps like a bounding mountain goat.

Rock sliders are added underneath the ZR2’s rocker panels as protective plates in case it skids along the rocks, which happened often during our rock climb. The front bumper of the truck is tapered, which increases tire clearance for going over obstacles and an aluminum skid plate protects the radiator and engine-oil pan. An additional shield protects the transfer case, while control arms are cast iron for greater durability.

Hill-descent control helps keep the ZR2 composed while tackling extreme downhill grades. The driver sets a low speed for the descent and the software takes over to deliver the truck and its occupants safely to the bottom.

Unfortunately, the interface for activating HDC is not user-friendly and the truck needs a split second to gather some inputs, such as grade, before it can react appropriately. That leaves a split second going into the descent when the ZR2 feels like it is going over much too quickly. Our hearts jumped before we got used to the process.

The ZR2 comes straight from the factory shod with 31-in. Goodyear Wrangler Duratrac off-road tires wrapping 17-in. by 8-in. aluminum wheels. The big, black rubber, combined with a more aggressively styled grille and a black hood insert, gives the ZR2 an unmistakably rugged look.

The ZR2 also is built off a rock-solid midsize platform, so even across some of the most brutal off-camber terrain body flex between the cab and bed were next to zero. The pickup felt just as sturdy along the twisty canyon blacktop.

The interior of the ZR2 differs very little from a regular Colorado, except for model-specific ZR2 stitched badges on the headrests, and that is a good thing in our book because we always found the car-like cabin appealing. User interfaces such as the Chevy MyLink system are familiar, too, although the truck adds a gauge package to indicate the degree of incline or decline and camber.

Buyers can order a full-length black vinyl floor in place of the standard carpeting in case they want something easier to care for out on the trail, while a spray-in bed liner is standard and an optional, dealer-installed, bed-mounted spare-tire carrier can be added to enhance its Baja credentials.

The extended-cab ZR2 tested here featured GM’s 2.8L turbocharged 4-cyl. diesel engine (LWN) mated to a Hydra-Matic 6L50 6-speed automatic transmission. With the heart of a UFC fighter, it is hard to imagine a better engine for the ZR2 duty cycle. The low-end torque makes short work of low-speed driving along uneven terrain, and a sprint back to camp along the highway delivered 26.2 mpg (9.0 L/100 km). It would be great choice for weekenders pulling an RV or small boat to the trailhead.

But the diesel unit adds $3,500 to a truck already carrying a starting price of $40,000 with GM’s excellent, if not as grunt-worthy, 3.6L gasoline direct injection V-6 (LFX) paired to a Hydra-Matic 8L45 8-speed automatic transmission.

The heavy-duty hardware of the ZR2 adversely affects the EPA-rated fuel economy of both models, but then so does spinning around the mud all day, and there are few trucks better than the Colorado ZR2 to get your boots dirty with.