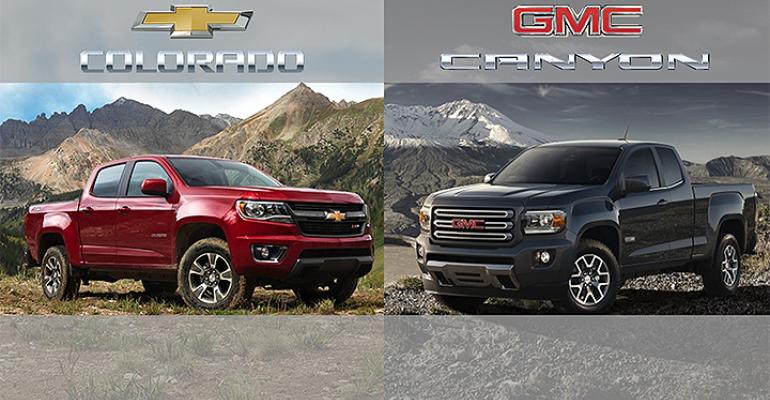 How crazy are the product planners at General Motors to commit the automaker to a multi-million dollar re-launch of the Chevrolet Colorado and GMC Canyon? Crazy like a fox, it would appear.

DEL MAR, CA – How the mighty have fallen.

There was a day, albeit some 30 years ago, when the U.S. midsize pickup-truck market would net nearly 1.5 million annual sales across 11 brands. Last year, six brands mustered a paltry 244,834 deliveries, according to WardsAuto data.

If ever there was a segment on the skids, it would be midsize pickups.

So how crazy are the product planners at General Motors to commit the automaker to a multi-million dollar re-launch of the Chevrolet Colorado and GMC Canyon, a pair of pickups its own marketers admit flew under everyone’s radar during their previous 10-year production run?

Crazy like a fox, it would appear. Because the new Colorado and Canyon, available in crew- and extended-cab body styles with two cargo-bed lengths, aren’t just two finely engineered and sharply styled trucks. They are two fists of Red Bull almost certain to get the segment back on its feet.

Toyota has taken notice. GM’s new pickups are just trickling to dealers, shipments from the automaker’s Wentzville, MO, assembly plant started last month and Toyota’s manufacturing schedulers are boosting production of their entry in the segment, the industry-leading Tacoma. Somebody else smells a comeback, too.

But whereas the Tacoma and its rival the Nissan Frontier are woefully long in the tooth – expect that to change soon, as those trucks are scheduled for redesigns in 2015 and 2017, respectively – the Colorado and Canyon are exactly what a GM-estimated 12.5 million midsize truck buyers have been waiting for while pining away in older models or turning to other segments.

The GM midsize pickups boast roomier cabins than the segment has ever seen, a key complaint of those who fled to other vehicles. And if it weren’t for a commanding view of the road, you’d swear you were in a midsize car, given all the amenities.

The center stack on the Colorado resembles that of the new Impala, for example, and that’s a good thing these days. The seats are comfortable and attractive, whether fitted in leather or cloth, and the integration of the headrests recall a Chevy Camaro more than a Silverado.

Not surprisingly, the interior of the Canyon feels a bit more upscale than the Colorado. But whether it’s so much different it warrants the extra dollars GMC will charge over the Chevy is debatable. The bigger difference between the two lies in the exterior design, where GMC plays Bruce Wayne to Chevy’s Batman.

Both trucks receive OnStar 4G LTE and Wi-Fi hotspot capability. The Wi-Fi connection is on-the-house for the first three months of ownership before a data plan or package must be purchased, while an OnStar safety, security and navigation package is free for three months before a subscription is necessary.

The Wi-Fi signal, as tested in these trucks and other GM products with the new technology, has never let us down.

The Colorado and Canyon also boast two of the beefiest steering wheels on the market, just begging you to take the trucks off-road. The gearshift feels just right in your palm, as well, although some poor fit-and-finish leaves a sharp edge under the handle of models tested.

The Colorado and Canyon ride like cars, too. A fully boxed frame and lots of high-strength and ultra-high-strength steel give the pickups rock-solid rigidity. There isn’t a lick of chassis flex between the cab and the cargo bed.

Sure, there’s a little freeway hop unloaded, but even that has been tamed to acceptable levels with shear-style and compression body mounts that work in compression and rebound.

Hydraulic mounts mitigate noise and vibration from the engine bay, although a slight thrumming in the driver’s seat at idle during testing here was disappointing and betrays the 1 million miles (1.6 million km) GM engineers spent validating the trucks.

In another disappointment, the second rows of the trucks do not receive a center head restraint despite being advertised as 5-passenger vehicles.

The powertrains are impressive, to a point. The Hydra-Matic  6-speed automatics mate nicely to both the uplevel 3.6L V-6 and the base 2.5L 4-cyl. Both engines are ready to run with good highway pickup.

The 4-banger arguably leaves the best impression, punching above its weight and returning a spot-on 19 mpg (12.4 L/100 km) unloaded in mostly city driving.

The volume-seeking V-6, one of GM’s finest engines, posts a less-impressive peak 18 mpg (13.1 L/100 km). Base trucks with the 2.5L 4-cyl. and an Eaton-sourced 6-speed manual gearbox were not available for testing.

The weak spot for these powertrains is trailering. They can do heavy lifting and the V-6 is especially qualified, but fuel economy plummets the harder they work. However, a 2.8L 4-cyl. Duramax turbodiesel is in the works for next year, and its combination of torque and fuel efficiency should satisfy buyers using the trucks for towing and hauling.

An  automatic-locking rear differential appears as standard equipment on Colorado Z71 models and Canyon SLT trim levels, and is optional with a few other specific vehicle packages. The unit provides extra traction without driver intervention via dash-mounted buttons or knobs.

GM expects buyers to use these trucks, too. With an average transaction price of $28,000, midsize pickups buyers generally could afford a fullsize truck. So while there is a Colorado starting at $20,995 for price-sensitive shoppers, GM sees most folks loading the pickups with optional equipment and dipping into a line of specially developed accessories available at Chevy and GMC dealerships.

Here in Del Mar, where the Pacific Ocean and diverse Southern California terrain make a playground for active people, midsize pickups are at every corner, and a good number of them are rigged with home-fabricated racks for surfboards, kayaks and bikes.

If that’s a snapshot of today’s midsize truck market, GM’s product planners may not only be perfectly sane, they also might be the smartest guys in the room.