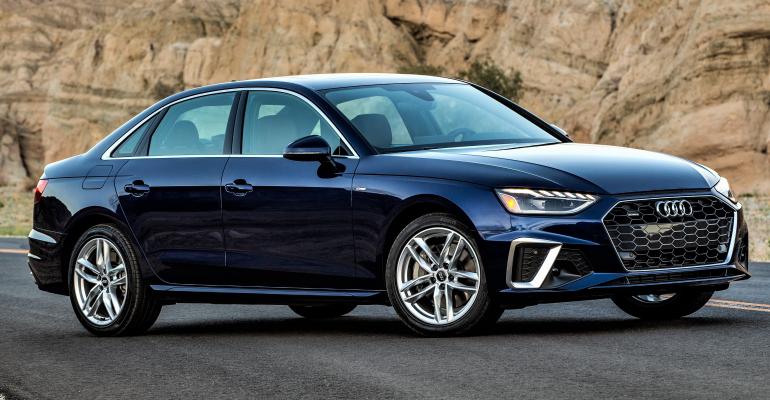 Audi says the styling refresh for the 2020 A4 and S4 is the most significant the automaker has ever undertaken. Only the roof and greenhouse escape the scalpel, yet the result remains familiar to the eye.

Inside (below), the new A4/S4 look much the same, but feature a next-generation version of Audi’s Virtual Cockpit digital instrumentation. The A4/S4 also are the first Audis to get the MIB 3 Multi-Media Interface (MMI) infotainment system. According to Anthony Garbis, product manager for the A4/S4, the MIB 3 version of MMI is 10 times more powerful than before thanks to new Samsung-sourced automotive-grade microchips. It does not offer over-the-air updates, at least not yet.

The MMI’s rectangular touchscreen display grows to 10.1 in. (25.7 cm). The resulting dashboard appearance is awkward, but no more so than what you’d find in a Tesla Model 3. It doesn’t block outward visibility unless a driver prefers a low and reclined driving position. 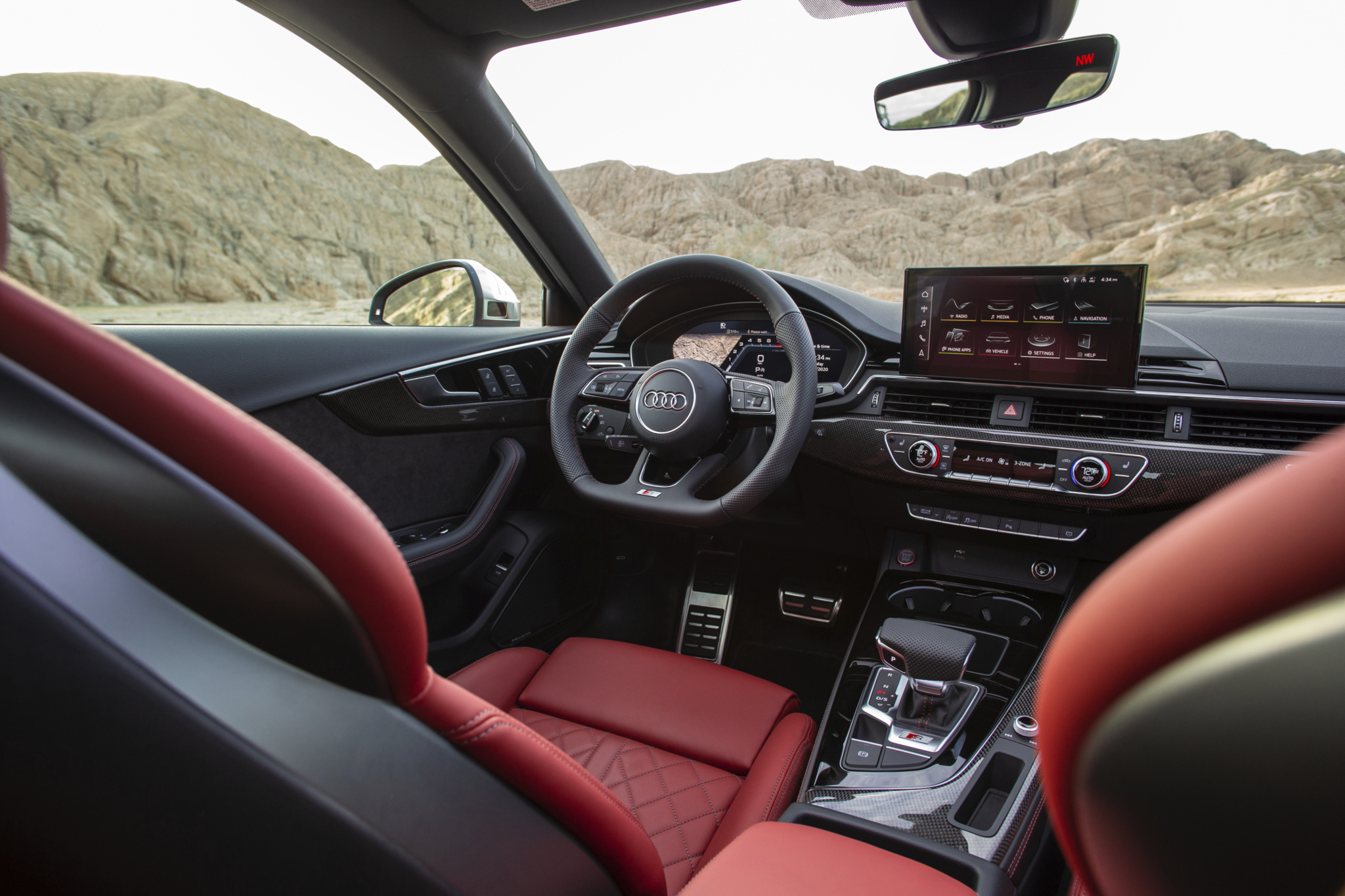 Quick to load and respond to input, the MMI is equipped with acoustic feedback when using the virtual buttons on the screen. However, the display does suffer from glare. Also, during natural voice-recognition testing it could not find the nearest hospital. Otherwise, A4/S4 owners will appreciate the fast new MIB 3 MMI infotainment system and the vivid Audi Virtual Cockpit instrumentation, the latter now available without the optional embedded navigation system.

The ’20 Audi S4 is terrific fun to drive, thanks largely to its turbocharged 3.0L V-6 making 349 hp and 369 lb.-ft. (500 Nm) of torque. The S Sport option package equips the test S4 with a sport adaptive damping suspension and a sport rear differential that adjusts torque distribution between the rear wheels.

It’s a shame the S4 isn’t offered as a wagon, because it’s far more athletic and enjoyable to drive than the taller, heavier and costlier ’20 Audi Q7 (lower left). But such a vehicle couldn’t match the Q7’s passenger space, cargo volume or available 7,700-lb. (3,493-kg) towing capacity.

Most Q7s are likely to have the new-for-’20, light-electrified and turbocharged 3.0L V-6 under the hood. It produces 335 hp and 369 lb.-ft. (500 Nm) of torque, and Audi says the torque is accessible at lower rpm and across a wider range than the previous supercharged V6. Acceleration to 60 mph takes 5.7 seconds, according to Audi.

Though the test vehicle lacks the Q7’s available 4-wheel steering system, it nevertheless proves adept in the city and rewarding on mountain roads near Palm Springs, helped in part by the Prestige trim’s adaptive air suspension and 21-in. wheels in the new Black Optic option package. More than anything, though, the Q7 proves exceptionally quiet and composed.

New advanced driving-assistance systems include Intersection Assist, a front cross-traffic alert system that operates at lower speeds as the SUV approaches intersections. And Adaptive Cruise Assist, a Level 2 driving assistant that works at speeds up to 95 mph (153 km/h), works exceptionally well during testing on Interstate 10.

While using the active lane-assist system, prolonged hands-free driving activates the new Emergency Assist function. After increasingly urgent requests for the driver to retake control, Emergency Assist presumes the driver is asleep or has suffered a medical emergency, and brings the Q7 to a staged, controlled stop in the lane of travel with the hazard flashers on. (below) 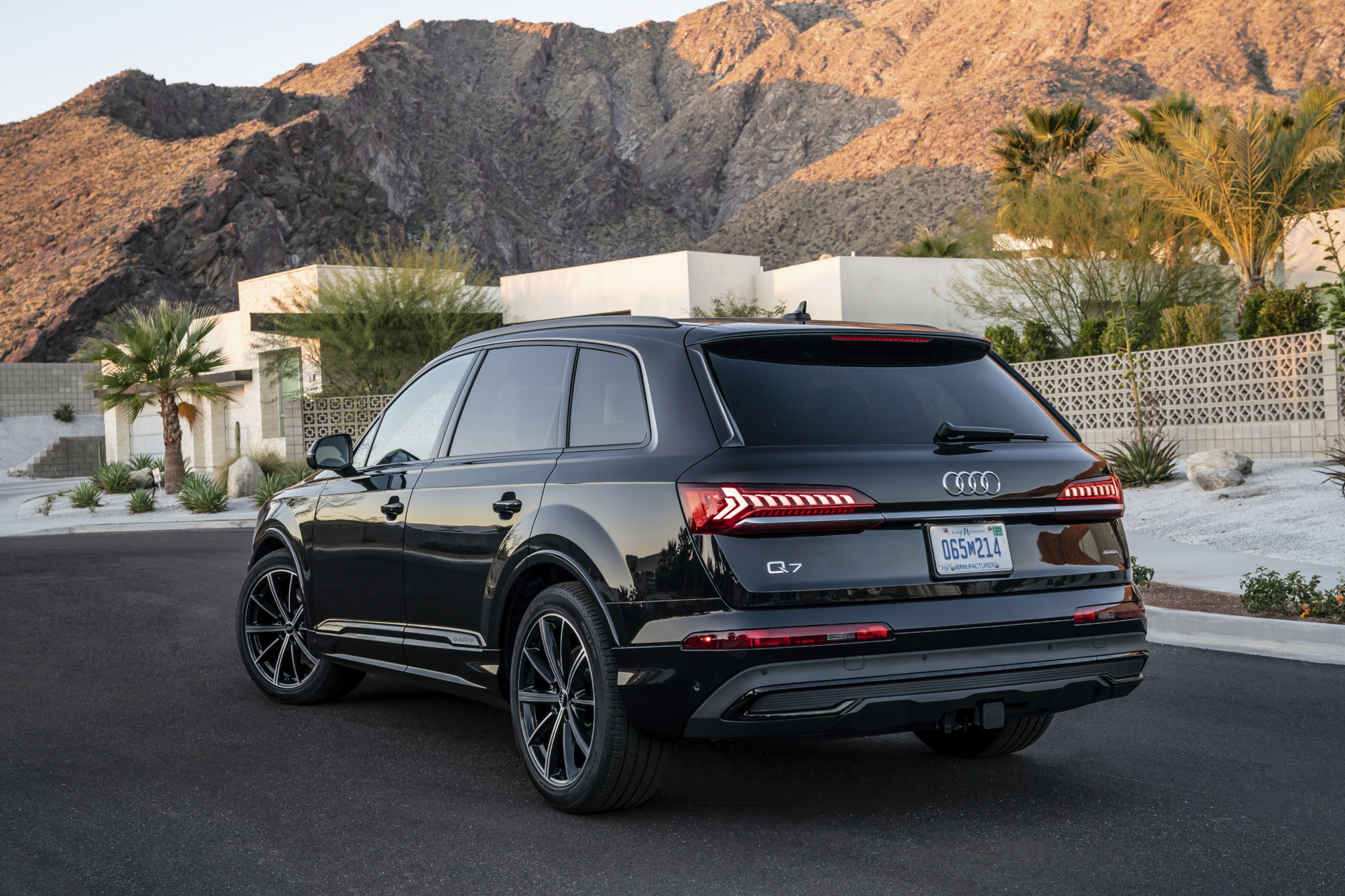 Offered through Audi Connect in a handful of cities, Traffic Light Info tells the driver the optimum speed to maintain in order to hit every green light. When unavoidably detained, it also provides timing for when the light will change to green. As more municipalities make this data available to Audi, Traffic Light Info will become more widely available.

With SUVs accounting for more than 60% of its sales, and with Audi facing competition from the more recently redesigned BMW X5/X7 and Mercedes-Benz GLE/GLS, the ’20 Q7 needs nothing more than a habitable third-row seat to ensure its appeal.

If you’re a member of the car-buying camp, the ’20 Audi A4’s updates should keep it on the consideration list, especially in the thoroughly entertaining S4 specification.