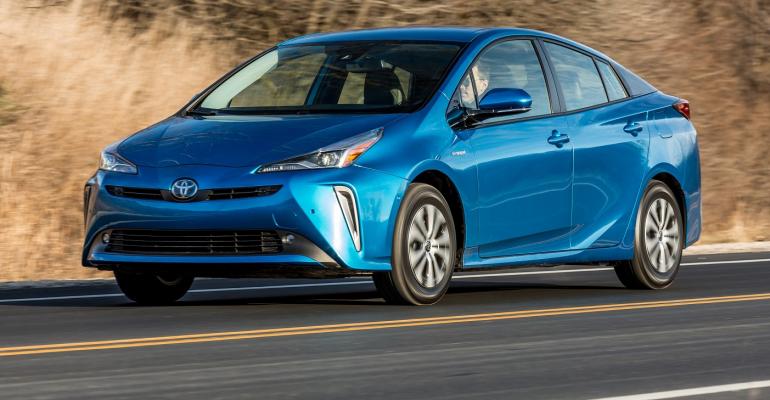 Prius’ AWD-e system always provides boost up to 6 mph and then whenever necessary up to 43 mph.
Vehicles>Test Drives

Can AWD Save Toyota’s Prius?

The ’19 Prius is now available with all-wheel drive, and more than 20% of customers are checking that box. Still, Prius sales remain abysmal.

Worldwide, Toyota is the undisputed champion of hybrids. Its gas-electric Prius launched in 2001 and was in the right place at the right time whenever fuel prices spiked and consumers were looking for efficient alternatives.

Since 2001, Toyota has sold 4.3 million Prius models globally (2.1 million in the U.S.), including plug-in hybrids and variant body styles. The high-water mark in the U.S. came in 2012, when the Japanese automaker delivered 236,659 units, including the smaller Prius C.

But ever since, sales have plummeted at an alarming rate. From 2015 to 2018, Prius volume dropped by more than half, according to Wards Intelligence data.

Stable fuel prices have conspired against the fuel-sipper, and consumers have migrated toward larger utility vehicles such as Toyota’s own RAV4 hybrid. It probably didn’t help that exterior styling of the fourth-generation model that launched in 2016 was criticized as overly aggressive.

But the automaker finds hope in another trend that has followed essentially the same timeline: growing popularity of all-wheel-drive powertrains.

Since January, the ’19 Prius AWD-e has been available with a gasoline engine to drive the front wheels and two electric motor-generators, one of them mounted in back to drive the rear wheels, always providing boost up to 6 mph (10 km/h) and then whenever necessary up to 43 mph (69 km/h). AWD is disengaged at higher speeds.

Until now, the Prius was strictly front-wheel-drive, with one electric motor helping spin the front axle.

Toyota officials say customers across the U.S. are interested in AWD availability in the Prius, even in sunny Southern California, and that residents of Hokkaido north of the Japanese mainland – where snow can be heavy – were looking for vehicles with better traction.

So far, the strategy appears to be working. Toyota management was counting on 25% of Prius buyers this year to opt for AWD, and the U.S. sales figures have been nearly on target: 22% in March, 24% in April and 24.1% in May.

With a starting price of $26,380, the Prius AWD-e carries a $1,400 premium over a comparably equipped FWD model in XLE and LE trim. Part of the additional cost is the higher-capacity nickel-metal hydride batteries paired with AWD, while the standard FWD models use Toyota’s standard lithium-ion batteries.

Like the FWD Prius, the AWD-e model offers Power, Eco and Normal drive settings to adjust engine throttle response, but the amount of electric torque to the rear wheels is the same in all three modes. 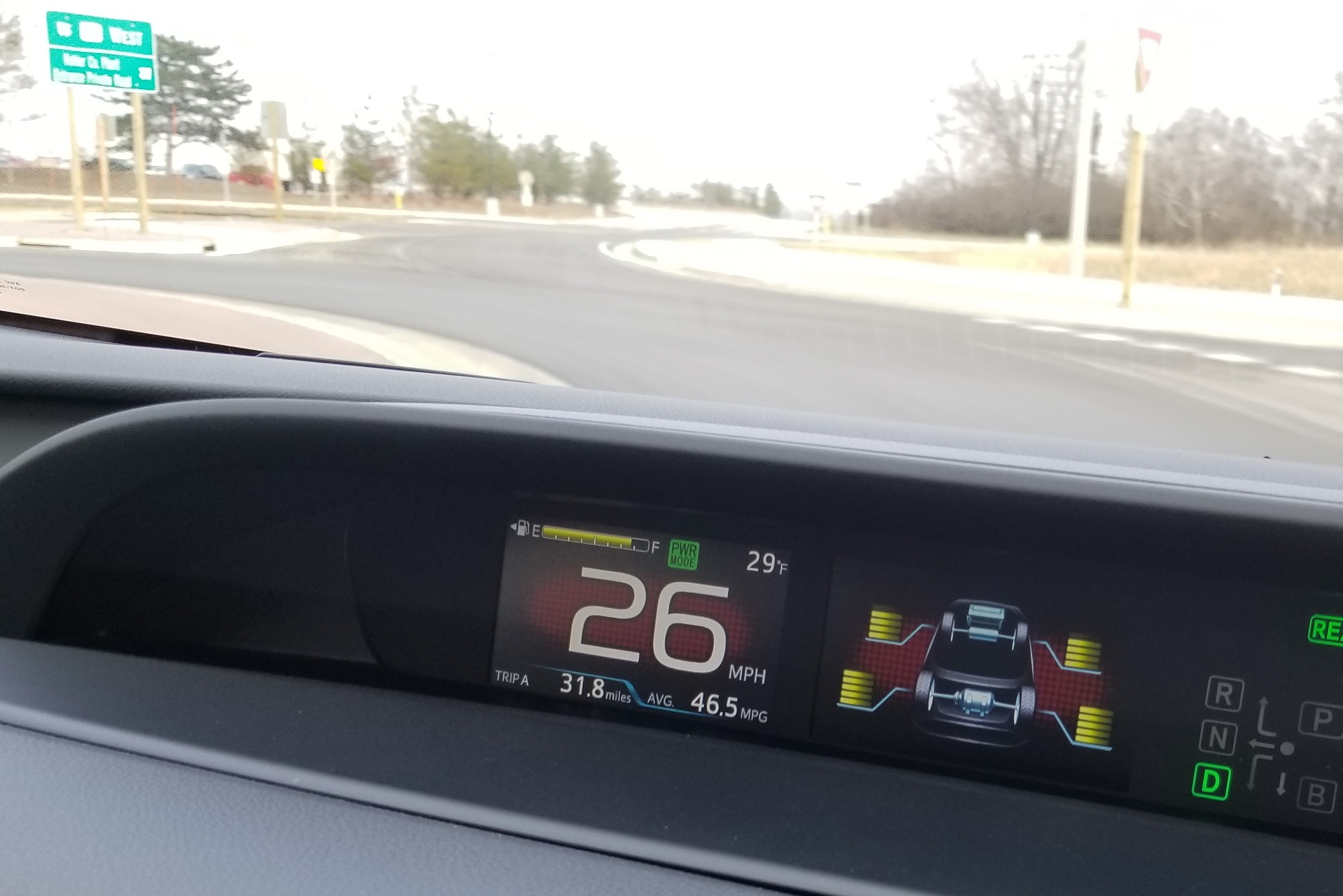 Our test drives confirm the AWD system is yaw dependent, meaning torque will be transmitted to the rear wheels through the electric motor if a heavy-footed driver is repeatedly circling a roundabout with no other traffic around (see photo above).

In that case, the central display screen will show full torque apportioned to all four wheels, and electronic stability control keeps the car headed in the right direction.

And don’t try this at home, but the AWD system also works in reverse at speeds up to 16 mph (26 km/h), which could be handy getting out of a snow bank.

In normal circumstances, the driver won’t even know when the AWD-e system is at work or at rest. The 71-hp motor-generator up front helps drive the front wheels and enables regenerative braking, while the 7-hp induction motor at the rear – weighing 64.4 lbs. (29 kg) – works purely on demand.

The two motors blend with the high-compression 1.8L Atkinson-cycle 4-cyl. that channels torque to the front wheels through a continuously variable transaxle.

AWD represents the most significant new addition in the refreshed fourth-generation ’19 Prius, but the interior receives updates as well (see photo below). 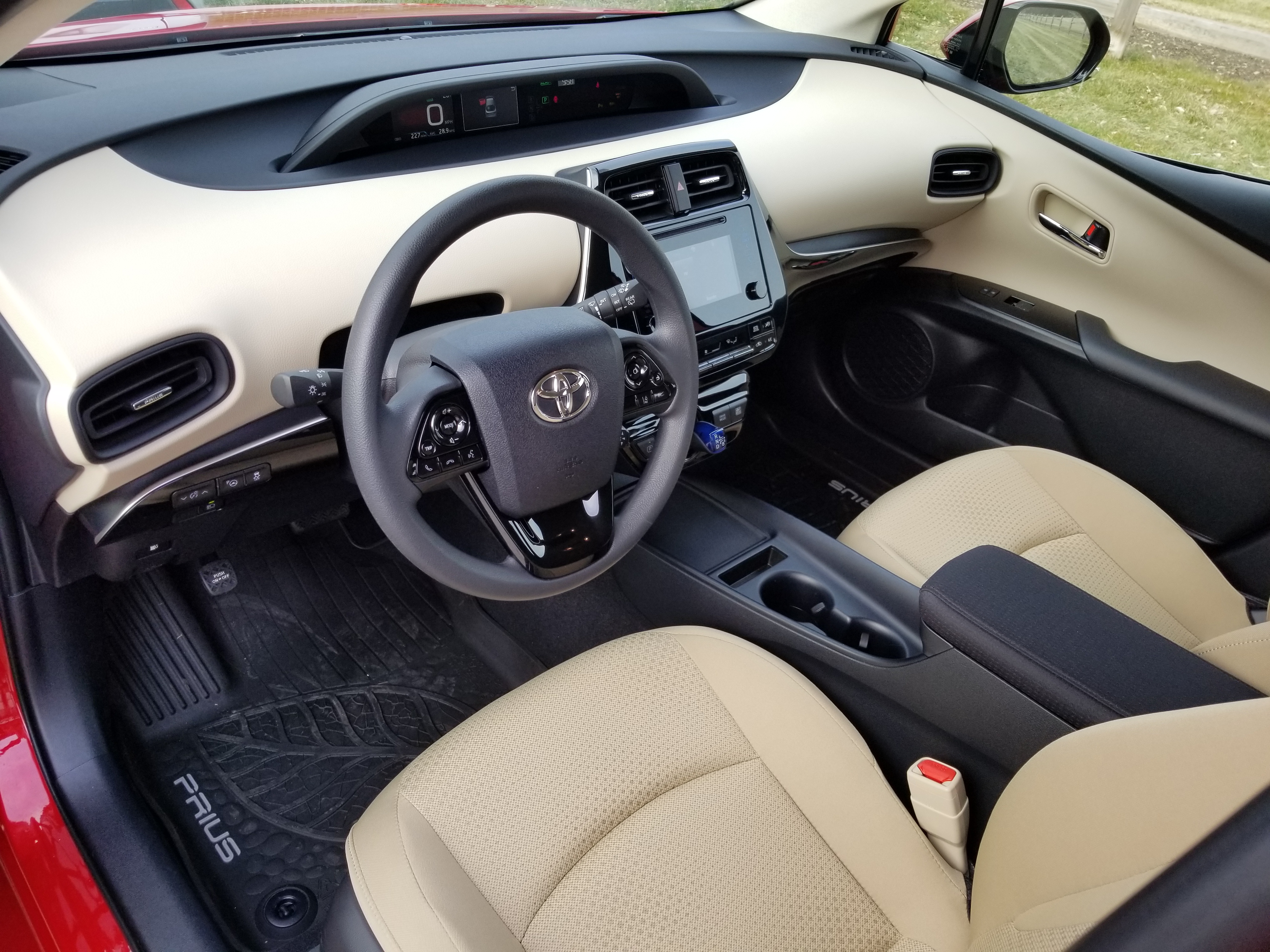 White had been available since the 2016 redesign, but that interior color is no longer offered, perhaps because the glossy white trim in the center console bore a striking resemblance to a porcelain toilet.

The Prius shook the auto industry to its core, as well-heeled, eco-minded celebrities bought them to make a statement, even embracing the quirky exterior styling.

But off-beat sheet metal doesn’t seem to seal many deals for the Prius these days, and there are lots of better-looking hybrids on the road from Honda, Hyundai and Subaru – and yes, even Toyota.

How much further can Prius sales tumble before Toyota management takes a sober look at its future? 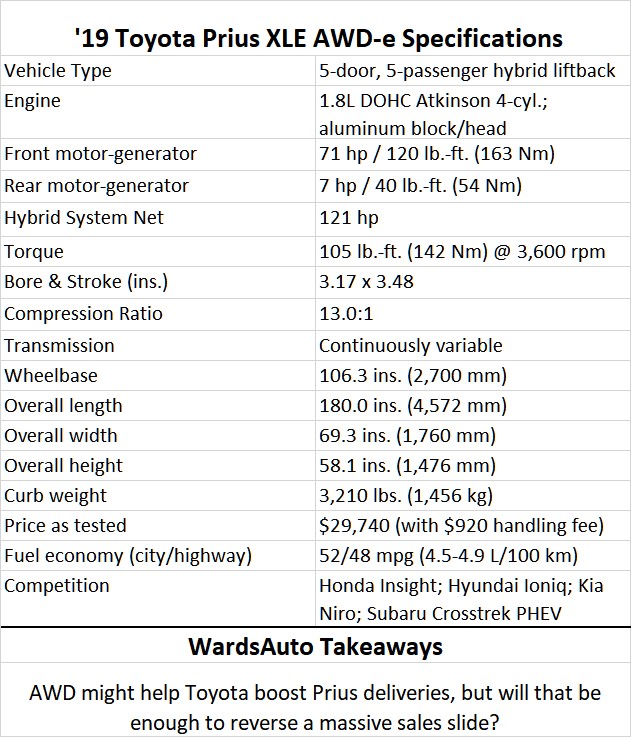