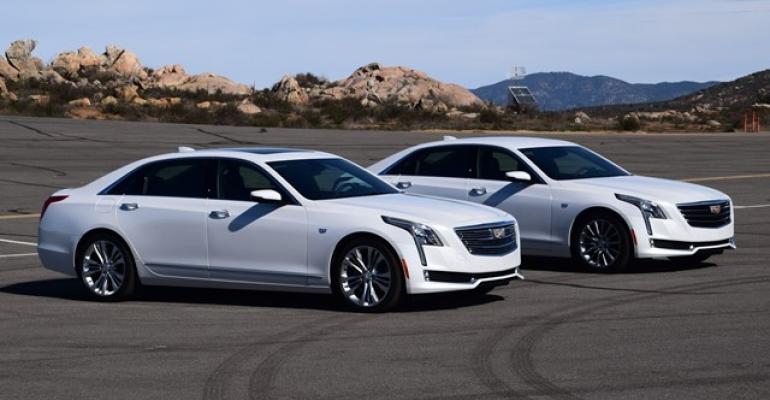 Cadillac Growing Up With CT6 Flagship

LOS ANGELES – We all grow up at some point, and it’s hard to think of a 113-year-old brand as lacking maturity. But Cadillac’s rebirth a decade ago remains a work in progress.

Edgy, angular sheet metal has established a unique styling language for respected vehicles like the ATS, CTS and SRX, and driving dynamics have gotten better with each successive model. The popular and pricey Escalade helps pay the bills.

But to be taken seriously in the luxury market requires a flagship model that showcases advanced technology, stout and quiet engines, great ride and handling, unassailable build quality, first-rate comfort and sharp looks. The Germans figured out this formula long ago, followed by Lexus.

This year, Cadillac gets a legit flagship in the CT6, a vibrant, elegant gem that proves the brand is growing up. It represents the first rear-wheel-drive Cadillac flagship since 1996, when the Fleetwood Brougham left the market.

The Mercedes S-Class, BMW 7-Series and Audi A8 are fitting ornaments atop those premium German automakers, and it appears General Motors’ luxury brand knows full well this is not a segment that tolerates corner cutting.

As a result, the CT6 is loaded with compelling features, such as a concert-quality Panaray 34-speaker Bose sound system; rear-wheel steering to improve handling; a camera-based dynamic mirror for wider rear visibility; 4-zone climate control; rear reclining seats; a touchpad in the center console that eliminates reaching for the display screen; and night vision that highlights when people or animals are spotted ahead.

That’s just the cool stuff you can show the neighbors.

In many ways, the more remarkable aspects are hidden behind the sheet metal, such as the 13 complex lightweight aluminum castings that make the CT6 so nimble; the patent-worthy joining of aluminum and steel structural components; and the Magnetic Ride Control that counteracts road imperfections and body roll and keeps the sedan absolutely buttoned down on winding, mountain roads.

The V-6s come standard with cylinder deactivation and on-demand all-wheel drive. The direct-injected 3.6L, which represents GM’s latest-generation V-6, already wins recognition as a 2016 Wards 10 Best Engines winner for its application in the Chevrolet Camaro and Cadillac ATS.

The 3.0L twin-turbo also springs from this new V-6 engine family, and GM says the use of stop/start and cylinder deactivation (shutting down two cylinders during light driving loads) will reduce fuel consumption about 6%.

This engine faces stiff competition from 3.0L twin-turbo 6-cyl. engines from Mercedes-Benz, BMW and Porsche. Likewise, Ford is introducing one in the Lincoln Continental, and Infiniti is rolling one out in the refreshed Q50. Everyone’s doing them, it seems.

On the road, Cadillac’s 3.0L is ideally suited for a no-nonsense large sedan that needs to be tame in casual motoring and uproarious when the driver is feeling saucy.

But arguably the most impressive powerplant is the 2.0L turbo, which won a Wards 10 Best Engines trophy in 2013 in the ATS. It would have been laughable 15 years ago to consider putting an engine so small in a flagship luxury sedan, but Cadillac succeeds, as does BMW with the 7-Series.

At wide-open throttle, GM’s 2.0L turbo handily gets the CT6 off the mark, and it cycles quickly through the forward gears of a new 8-speed automatic transmission. It’s quiet, smooth and feels supremely confident.

The V-6s are good, no question, but this diminutive I-4 immediately demonstrates the vast gains to be had in reducing mass.

Cadillac touts the CT6 as even lighter than the smaller BMW 5-Series and Mercedes E-Class, but with spaciousness on par with the 7-Series.

Of course, a plug-in hybrid and V-8 version of the CT6 will gain significant weight, and the car also is not available with a long wheelbase, which can hinder prospects in chauffeur-friendly markets such as China.

Keeping it Simple Inside

On the inside, the CT6 is all business, as Cadillac sticks with straightforward design themes and reasonably conventional interior color schemes, while eschewing the kind of flash and sizzle that have made the S-Class a runaway success.

Where the S-Class cabin is dramatic and offers breathtaking ambient lighting options, the CT6, like the 7-Series, is not intended to make a bold styling statement. Instead, Cadillac wants the car to speak for itself in its on-road performance. The softened exterior edges help convey this priority message and reinforce the notion that Cadillac is ready for a new aesthetic.

That’s fine, but the CT6’s interior design team should have been given a slightly longer leash to introduce at least a few clever flourishes. Interior boundaries were stretched when Cadillac introduced the ATS and CTS, but neither is selling particularly well. Perhaps the brand wants to simplify, which might not be a bad idea.

Models driven here are considered pre-production, which may explain some unsightly gaps where trim meets the headliner, or fabric pulling away from the driver’s seat bottom. Cadillac chief Johan de Nysschen vows these issues will be corrected by the time vehicles arrive in showrooms in March.

Cadillac needs a hit in the CT6. WardsAuto data show Cadillac sales were up 2.6% in 2015, and de Nysschen says CTS transaction prices are up $7,000. But the ATS and CTS are lagging in their segments, and the Escalade can only carry the brand so far.

With an attractive starting price of $53,495, the CT6 may be exactly what Cadillac needs. Fully loaded, the Platinum edition costs $87,465, which still comes in below the base S-Class and remains competitive with the 7-Series.

Cadillac still has some growing up to do, especially in market share, but the CT6 is an excellent start.