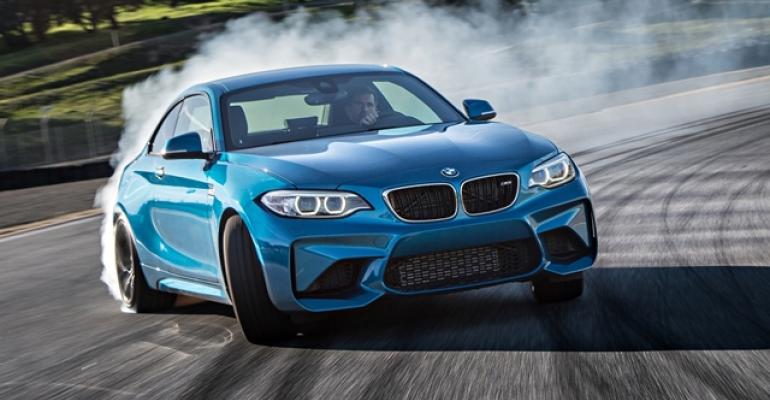 For those who thought BMW&rsquo;s excellent N55 turbo inline-6 was headed for retirement, a test drive in the M2, with a 365-hp modified N55 under the hood, shows this engine can run with the best.&nbsp;

Time to start a scoresheet to chart BMW’s embarrassment of riches in turbocharged inline 6-cyl. engines, most of them still fresh in the market.

The engine that replaced the N54, the more-efficient twin-scroll turbocharged N55, arrived in 2011, when it won the first of three consecutive Wards 10 Best Engines trophies. This has become the go-to 6-cyl. in BMW’s garage, powering utility vehicles such as the X3, luxurious 7-Series sedan and sporty 3-Series sedan and 4-Series coupe.

Eventually, the new B58 may replace the N55 in much of the lineup, but Bavarian management is not ready to send this workhorse to pasture.

Instead, the N55 leaps to the head of the pack by way of extensive upgrades enabling output of 365 hp in the all-new ’16 M2 coupe, a vehicle unveiled in Detroit at the North American International Auto Show in January.

A recent test drive confirms this direct-injected gasoline engine is all business, capable of putting big power to the rear wheels, revving freely to the 7,000-rpm redline without a hint of protest and howling joyously from the M-tuned quad tailpipes.

Weighing in at only 3,450 lbs. (1,565 kg) and exhibiting excellent chassis dynamics, the M2 arguably is the purest driver’s car in BMW’s portfolio at the moment.

There’s an efficiency play here, too, as this coupe that thrives on being pushed to the limits also musters 23.8 mpg (9.9 L/100 km) during a recent 500-mile (805-kg) test drive by the WardsAuto staff over several days.

Let’s take a closer look under the hood at updates to the N55 for the new M2.

Engine developers in Munich started with a standard all-aluminum N55 I-6 and turned it into a bona fide M product by adapting high-performance components from the twin-turbo I-6 in the bigger M4. The heaviest modifications came in the areas of the block, rotating assembly and forced-induction system.

Relative to the standard N55, the new thermodynamically optimized engine (with internal code N55B30T0) has a baffled and reshaped oil pan and oil drain pump to ensure good circulation during aggressive maneuvers on the track.

Also improved are the exhaust manifold and intake plumbing, with two intakes for better flow. The exhaust system benefits from an electrically operated flap that works in tandem with Active Sound Design, which pipes aural pleasure into the cabin through the stereo speakers.

Manufactured in Steyr, Austria, the intercooled engine has a closed-deck design, meaning the cylinder water jacket is closed at the top. The result is an engine that is extremely rigid and can endure higher cylinder pressures and accommodate more horsepower and torque.

“Do you need to do these things to a normal street engine? Probably not,” Guerrero says. “But lap after lap, if you know a car will be high-revving on racetracks, you need that. You don’t want engine failure.”

“When you are at those upper reaches, that’s where things like the additional radiator really pays off,” Guerrero says. “Because if your oil temperature and coolant temperature are running so hot, it’s inevitable to have reduced power. You can’t have that.”

With the $2,900 Drivelogic DCT, the driving mode selected will determine if gear changes are extremely fast or ultra-smooth.

A less-potent 2-Series, the 320-hp M235i, intended as a daily driver, uses an older version of the N55 engine with a standard iron crankshaft. But that engine uses the same head and has the same compression ratio (10.2:1).

Even though the track-ready M2 has a more powerful engine, extra cooling capacity and larger brakes, it’s lighter than the M235i. Trimming the interior extensively in carbon fiber surely helps the M2 stay slim.

Helping with M2 traction is BMW’s Active M Differential, which maximizes directional stability. The locking effect in this electronically controlled multi-plate limited-slip differential can vary between 0% and 100% based on the driving situation.

For now, this high-output version of the N55 only is in the M2 and the X4 M40i utility vehicle, although the latter does not benefit from overboost or track-worthy lubrication.

No word on additional applications for this engine, but we can hope.