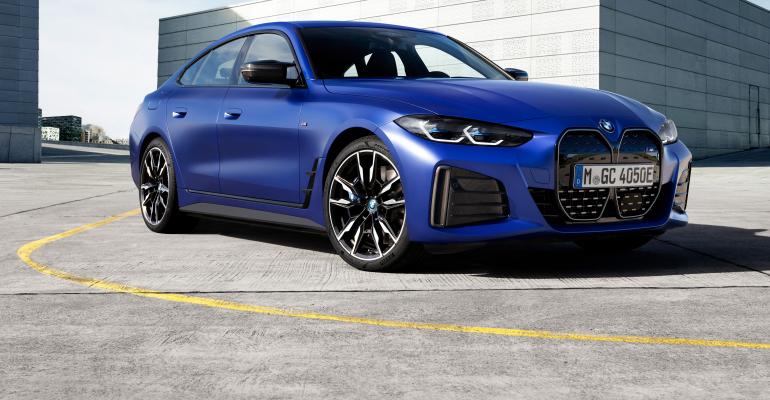 The all-wheel-drive i4 M50 takes performance honors. It gets two electric motors, one on the front axle with 255 hp and another at the rear with 308-hp. Together they develop a combined system output of 536 hp and 586 lb.-ft. of torque.

Here we go. After a rousing statement of intent from BMW Chairman Oliver Zipse, the showing of the concept car and unveiling of the production version, we’ve finally got our hands on the new i4.

Based on the upcoming second-generation 4-Series GranCoupe – alongside which it will be produced in Germany – the new 4-door joins the i3, iX3 and iX in what will be a four-strong lineup of models from BMW’s i electric-vehicle sub-brand by the end of the year.

It is one of up to 12 electric models BMW says it will offer worldwide by 2023.

The i4 is based on a heavily modified version of BMW’s existing CLAR (Cluster Architecture) platform rather than its own dedicated structure. The styling is certainly familiar, sharing many elements with the latest 4-Series Coupe and Convertible, including its bold grille which, without the need for engine-bay cooling, has been blanked off.

Farther back, the i4 gets characteristic BMW-like proportions. There’s a long hood, heavily raked windshield, frameless doors, flush door handles and a high-set, notchback-style rear end together with a small lip spoiler, which forms part of a range of unique M-styling touches on the M50 xDrive.

Inside, the i4 adopts a combination of new and existing design elements. Key here is a curved digital display panel (below) similar to that used by the iX, housing the instruments and infotainment functions. It sits atop the same lower dashboard as that found in various BMWs, including the latest 3- and 4-Series models.

The driving position and overall ergonomics feel welcomingly familiar and spot-on for a car that aims to combine genuine everyday livability with a good dose of sporting flair. Accommodation is compromised by the svelte lines, though. It’s fine up front, but the curved roof restricts headroom in the rear, and the 14.8-cu.-ft. (419-L) trunk is 2.1 cu.-ft. (59 L) less than that offered by the latest 3-Series.

The i4’s fifth-generation electric powertrain is largely shared with the new iX SUV.

The price-leading, rear-wheel-drive i4 eDrive40 runs a rear-mounted electric motor with 335 hp.

It’s the all-wheel-drive i4 M50 driven here that takes the performance honors, though. It gets two electric motors, one on the front axle with 255 hp and another at the rear with 308-hp. Together they develop a combined system output of 536 hp, some 34 hp more than the twin-turbocharged 3.0L gasoline I-6 used by the new M3 Competition.

The headlining reserves are, however, only fully unleashed in brief periods in a so-called Sport Boost mode. In other drive modes the i4 M50 delivers a milder 469 hp and 538 lb.-ft. (729 Nm).

An 80.7-kWh (net) lithium-ion battery sits underneath. It is bolted to the floorpan in a process that is claimed to add rigidity to the overall structure. There also is an additional section of the battery housed within the center tunnel in the place usually taken up by a driveshaft. 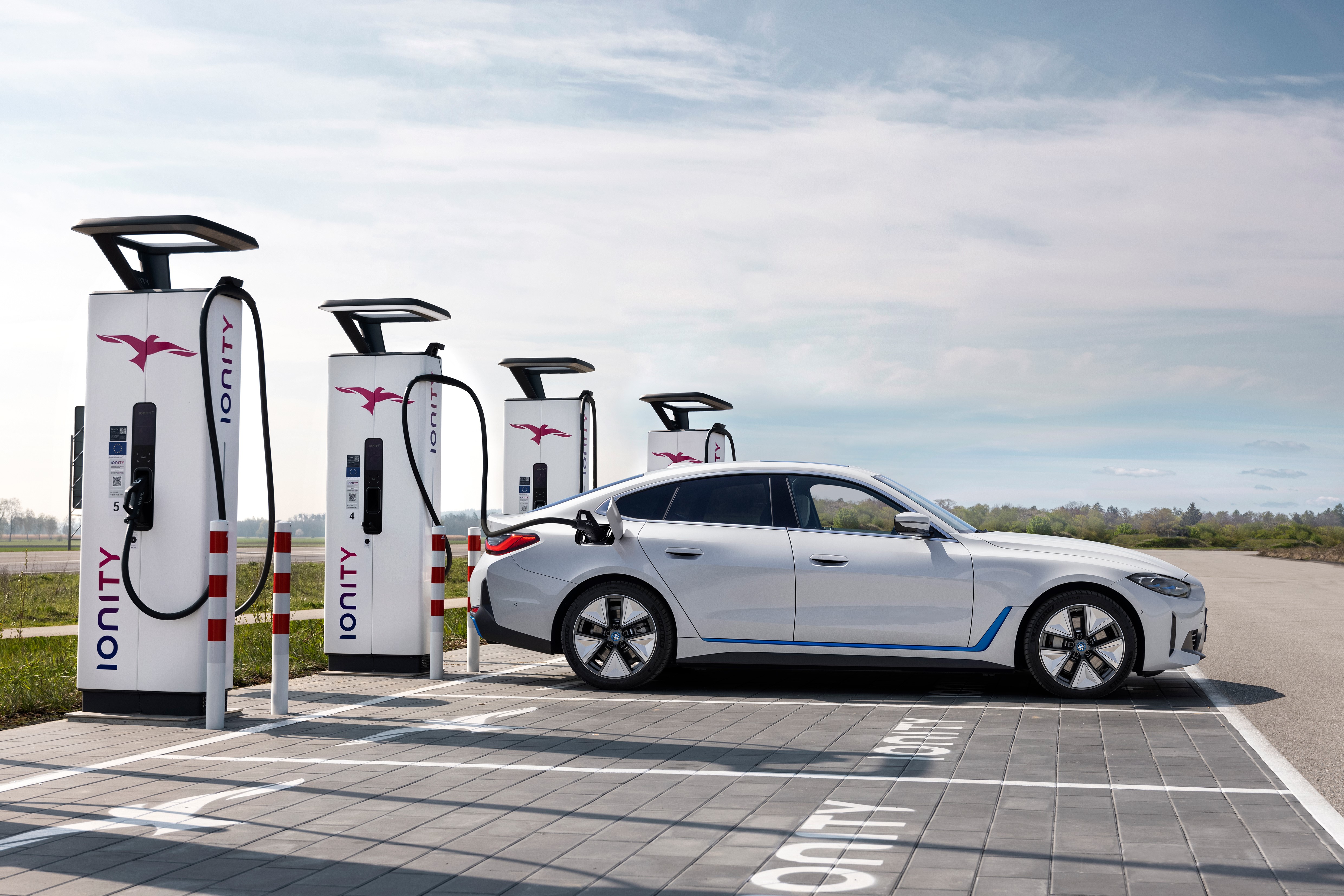 There’s no whirring of electrics, just silence as the range-topping i4 moves away in a wonderfully smooth manner. The two electric motors are highly responsive. The throttle is superbly calibrated, allowing you to meter out the power as needed. This all makes for tremendous ease of driving.

The new BMW is both tremendously well-refined and sufficiently powerful to give it very brisk qualities: The automaker claims 0-62 mph (100 km/h) in 3.9 seconds together with a limited 140 mph (225 km/h) top speed.

The quick-acting all-wheel-drive system plays a crucial role in the performance potential of BMW’s first electric sedan. The traction is quite striking in combination with 245/40 R19 (front) and 255/40 R19 (rear) tires fitted to the prototype we drove.

With a 48:52 front-to-rear weight distribution, it also feels nicely balanced. While the electromechanical steering is not exactly overflowing with feedback, the new 4-door changes direction smartly with the sort of eager qualities you expect of a car wearing the M badge.

It also has impressive grip. The all-wheel-drive system is programmed to deliver predominantly rear-wheel-drive qualities. However, it is quick to shift drive to the front wheels to keep things on a neutral footing. There’s an assured level of mid-corner purchase and, with all that torque, exceptionally strong drive at the exit.

The ride, meanwhile, is nicely composed, thanks to the air springs’ ability to adjust ride height. It is occasionally upset by high-frequency bumps and more demanding transverse ridges. However, the adaptive dampers are quick to react, leading to fitting levels of comfort.

In top-of-the-line M50 form the i4 delivers exceptional performance and is genuinely captivating to drive. With a class-competitive range, a highly efficient energy-recuperation system and high-power charging capability, it promises to prove a very creditable alternative to the Tesla Model 3 as well as other upcoming electric sedans when U.S. sales begin later this year.