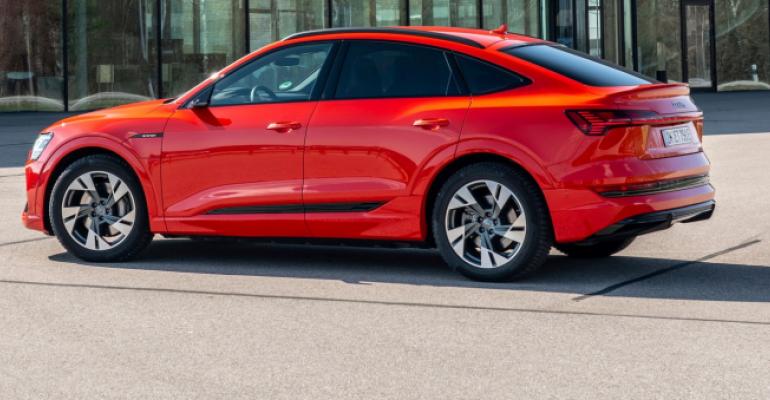 The e-tron Sportback 55 quattro is a sportier version of the e-tron quattro sold in selected markets since mid-2019. Outwardly, it’s set apart from its sibling by a more heavily curved, coupe-like roofline and liftback-style tailgate.

This is the car with which Audi aims to challenge the electric-powered Jaguar I-Pace and Tesla Model X.

The e-tron Sportback 55 quattro, as its name suggests, is a sportier version of the e-tron quattro SUV sold in selected markets since mid-2019. Outwardly, it’s distinguished from its sibling by a more heavily curved, coupe-like roofline and liftback-style tailgate. Other changes include more aggressively styled bumpers and Audi’s new digital matrix LED headlamps.

Like the e-tron quattro (alongside which it’s produced at Audi’s factory in Brussels, Belgium), the e-tron Sportback is based on a modified version of the MLB Evo platform housing a 95-kWh lithium-ion battery.

Power is sent to all four wheels via a single-speed gearbox attached to each motor. In a key departure from its more practical sister, the e-tron Sportback features a decoupling mechanism between its front and rear axles.

This enables it to send its drive exclusively to the rear wheels in everyday driving in D, giving it an additional 7 miles (11 km) of range over the e-tron, at 278 miles (448 km). It’s only when you call up greater reserves via the kickdown function in S that the other motor is called upon and the front wheels begin to do the driving. 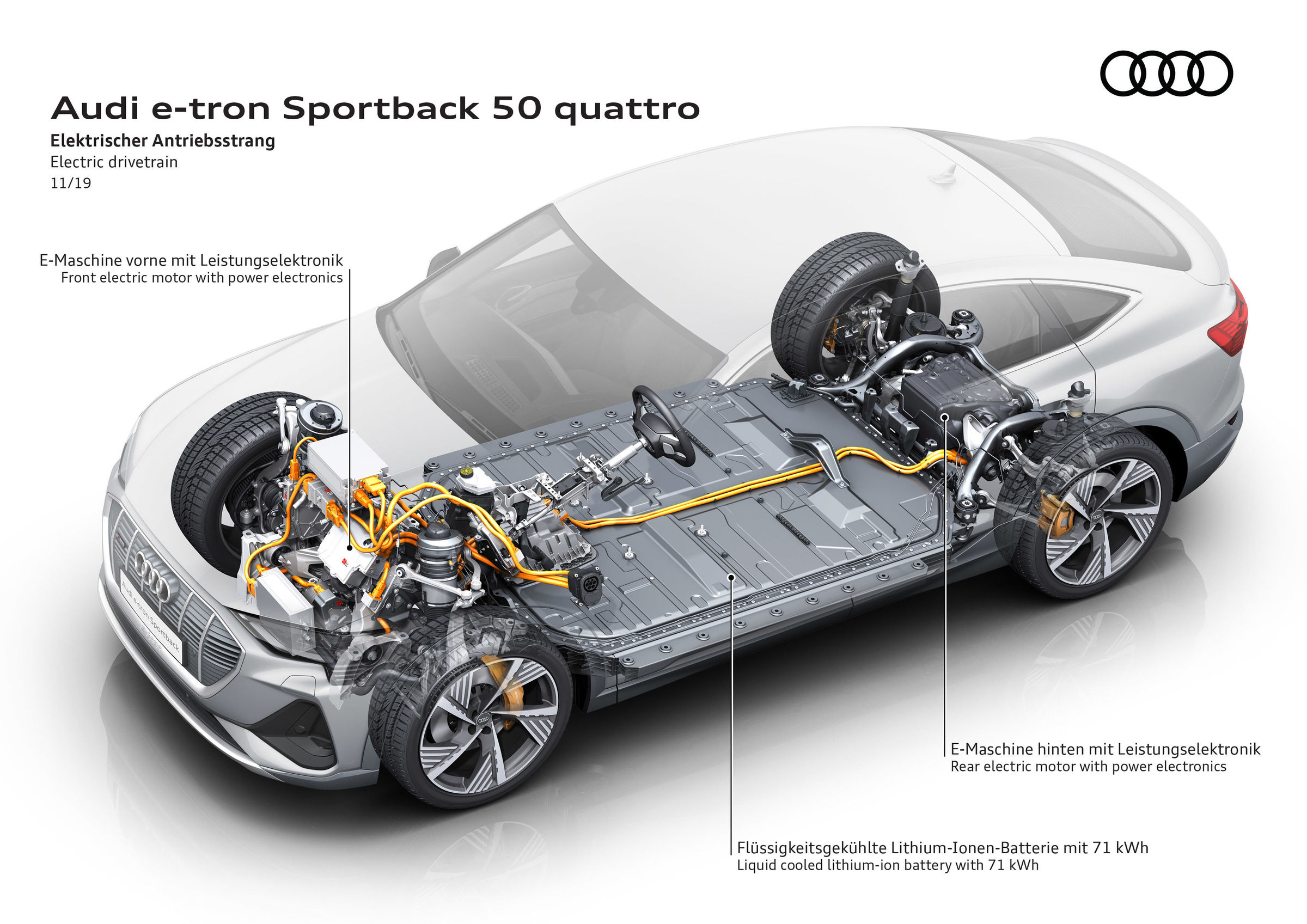 Acceleration off the line is strong but far from explosive in D, owing in part to the e-tron Sportback’s hefty 5,467-lb. (2,480-kg) curb weight. Once you’ve built up initial momentum, though, rolling acceleration is quite sharp. Keep the throttle nailed thereafter and the car will dispatch you beyond highway speed limits with plenty of force.

Satisfaction doesn’t only come via the accelerative forces at play. An advanced kinetic energy recuperation system with three selectable degrees of intensity (in addition to an automatic setting that draws on the sat-nav for topographic information) also demands a degree of skill from the driver, in seeing how much energy can be harvested under braking and during off-throttle coasting.

The e-tron Sportback is supremely refined. We’ve become used to the inherent quietness of electric cars, but Audi has managed to take acoustic civility to a new level. Rolling refinement, suppression of road noise and resistance to wind buffeting at all speeds are particularly good.

Don’t let that shortcoming put you off, though, because it still offers enough to be engaging. It’s capable of stringing together a series of medium-to-high-speed corners with excellent resistance to roll and some proper rear-biased handling properties.

With most of its weight concentrated low within its platform, resulting in a low center of gravity, it offers assured handling traits. 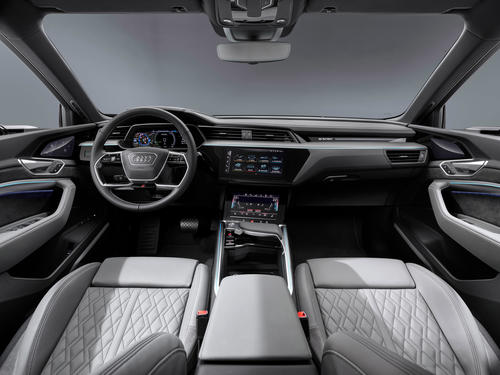 The ability of quattro all-wheel drive and its torque-vectoring system to individually apportion power to each rear wheel provide benefits on smooth surfaces, too.

The optional 255/50-profile tires worn by our test car deliver plenty of mid-corner grip, letting the driver carry a good deal of speed up to the apex without premature understeer or intervention from the electronic stability control system. Thereafter, being prodigious with the throttle causes no deterioration of poise.

The e-tron Sportback has tremendous braking, among the best we’ve come across in any electric car.

Inside (above), changes to the cabin from the regular e-tron are slight, but that’s no bad thing. In terms of attractiveness, perceived quality and tactility, the dashboard, controls and trim materials are premium in nature.

The optional front sports seats are firm and supportive, setting up a pleasantly roomy and airy driving environment. However, second-row accommodation is compromised by that plunging roofline.

The e-tron Sportback is more driver-oriented than the e-tron, if not quite to the degree we initially were led to believe. The difference between the two is quite subtle on pure performance alone.

However, with a more sporting shape, greater athleticism on more challenging roads, further improved refinement and a superb interior that continues to offer a good deal of everyday versatility, even despite the coupé redesign, it sets a high standard among electric SUVs in 55 quattro guise.