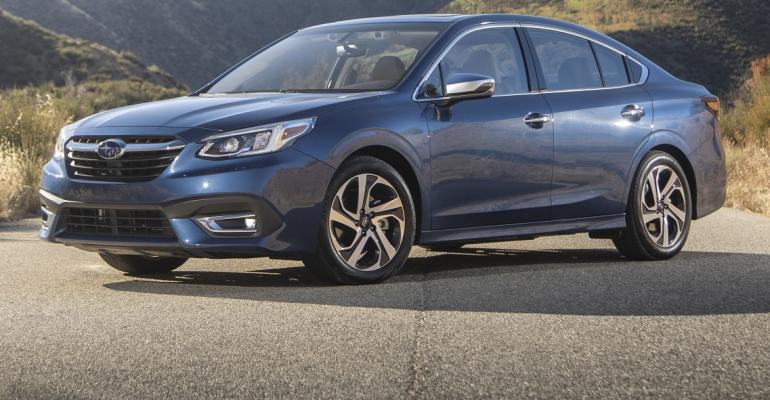 The latest generation of Subaru’s midsize sedan has good moves, and a great new cabin, although its technology varies in performance.

OJAI, CA – Few automakers have had as big a run as Subaru.

The small Japanese OEM has grown into a powerhouse, especially in the U.S. market where its annual volume increased by 263% from 2007-2018, Wards Intelligence data shows.

That growth shows no signs of abating as Subaru of America just clocked its best sales month (70,039 units) in company history in August.

However, that demand was driven largely by its utility vehicles, not cars. That’s a bit of a problem given the redesigned ’20 Legacy midsize 4-door now is arriving at dealers.

But, after spending roughly 100 miles (161 km) here behind the wheel of two new Legacys, the improvements Subaru has made should help keep it at its current volume, if not raise sales.

Redesigned for ’20 alongside its platform-mate, the Outback midsize CUV, the Legacy has a handling fun factor the portly family hauler lacks, but the same great advanced infotainment system and interior materials.

Both engines, tested in the mid-level Limited and the new high-end Touring XT grade, are perfectly capable for everyday suburban driving.

It’s a testament to Subaru’s engineering that neither model’s CVT feels like a CVT. There is no obvious rubber-banding in power delivery. Subaru says the CVT has 80% new components and an expanded “gear” ratio range, with gear in quotes because it’s all simulated shift points.

That said, the steeper hills on our route provide a challenge and we use the Touring’s standard paddles a few times to downshift when torque delivery lags our throttle inputs.

The Legacy Touring XT is as fling-able as the best-handling sport sedans in its class. Tossing it around and revving the engine proves irresistible so fuel economy after our turn behind the wheel is a paltry 23 mpg.

Riding on Subaru’s new global platform, the ’20 Legacy is 70% stiffer than the ’19 model, thanks to a variety of measures, including more high-strength steel and five times more structural adhesive than on the Impreza compact car.

Also aiding stiffness and appearing for the first time in a Subaru is full inner-frame construction, with outer panels welded to the structure following assembly of the body framework, not separate assembly and then joining of upper and under bodies.

Additionally improving handling is the car’s torque-vectoring all-wheel-drive system. As with all Subarus (save for the low-volume BRZ sports car), the Legacy has standard all-wheel drive, a feature that has been the current model’s top purchase reason, says the automaker.

Perhaps the best part of the new Legacy is its cabin, as Subaru continues to upgrade its interiors with each successive redesign.

The interior in our Touring XT, with finery such as Nappa leather and ventilated seats, is impressive. There are soft-touch surfaces aplenty, most thickly padded. Leather trim on doors sweeps up from the center to the top, and the seatbacks are full leather with a leather pocket, something you may not find in BMWs or Volvos.

The most talked about part of the new Legacy interior is its giant touchscreen, also on the new Outback. The 11.6-in. (29-cm) vertical screen, standard on every grade but the base model, is well organized. Large tiles on the home screen make for easy selections while the car is in motion and access various functions, including standard Apple CarPlay and Android Auto, as well as on-board navigation by TomTom.

Likely to ruffle the feathers of Subaru loyalists is the fact nearly all functions, including most HVAC controls, are accessed via the touchscreen. There are few physical controls on the center stack, namely a volume knob and a tune knob and temperature buttons.

The HVAC area is small and cannot be permanently enlarged, although hitting certain areas of the display opens big pop-up windows to change temperature and turn on ventilated seats. We hunt to find the latter after climbing into a scorching hot vehicle – it’s not logical that touching the display area for heated seats would open a window to access ventilated seats.

Voice recognition is a mixed bag. It works well to access radio stations in both the Limited and Touring XT, but asking for the nearest Starbucks in the former causes the screen to freeze. As we try to pull it out of its slumber by touching it and pressing the talk button, the infotainment system crashes and reboots. When it wakes up we try again, with no luck – even after asking for a more generic “coffee” won’t return results.

Both Legacys are packed with advanced-driver-assist systems (EyeSight in Subaru speak), and here too performance varies.

Prepare to be annoyed by all the beeps that come when a car both enters and leaves your forward path when adaptive cruise control is active.

The driver-monitoring function (standard on Touring) brought about incessant beeps in the twisties, as we look left or right at the curving road, not straight ahead as it wants you to do. Unfortunately, there is no way to fine-tune sensitivity – driver monitoring is on or off.

That said, we find ACC, standard across the board, valuable as it gently stops us behind stationary traffic at lights, more than once. Subaru says the system now has a farther long following-distance setting, allowing for quicker recognition of stopped traffic ahead.

Blindspot warning, standard only on Touring and with an Audi-style indicator light on the mirror housing, gets a thumbs up, but we’re less crazy about lane-keep assist with lane centering, which is temperamental, often not picking up on broken yellow lines. It better recognizes solid white lines, torqueing the wheel as it should. Subaru says lane centering now follows a lead vehicle instead of ping-pong-ing between lane lines.

The one thing that may stymie the Legacy’s chances in the market is its similar appearance to the outgoing model. In the midsize-sedan segment many competitors, including the two biggest, Toyota Camry and Honda Accord, have seriously raised their design game. Against those models, or the forthcoming sleek new Hyundai Sonata, it may suffer in comparison.

But on paper it matches or exceeds most specs of the other midsize 4-doors, and pricing is comparable to them too, ranging from $22,745-$35,895, sans options or $900 destination and handling.

The Legacy continues to be assembled at Subaru’s Lafayette, IN, plant and the '20 model arrives this fall at U.S. Subaru dealers. 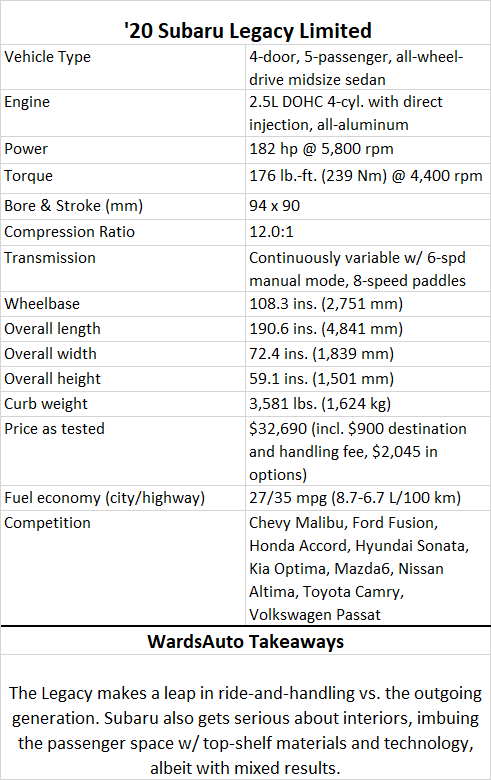